Very rarely does a games title so accurately describe almost the entirety of a games content. Smash Hit Plunder tells you exactly what you need to do in this game. You see, you grandmother died and left you her castle….and her debt so it’s up to you to raid room after room in the search for loot to pay of the guy holding the castle deed for ransom. 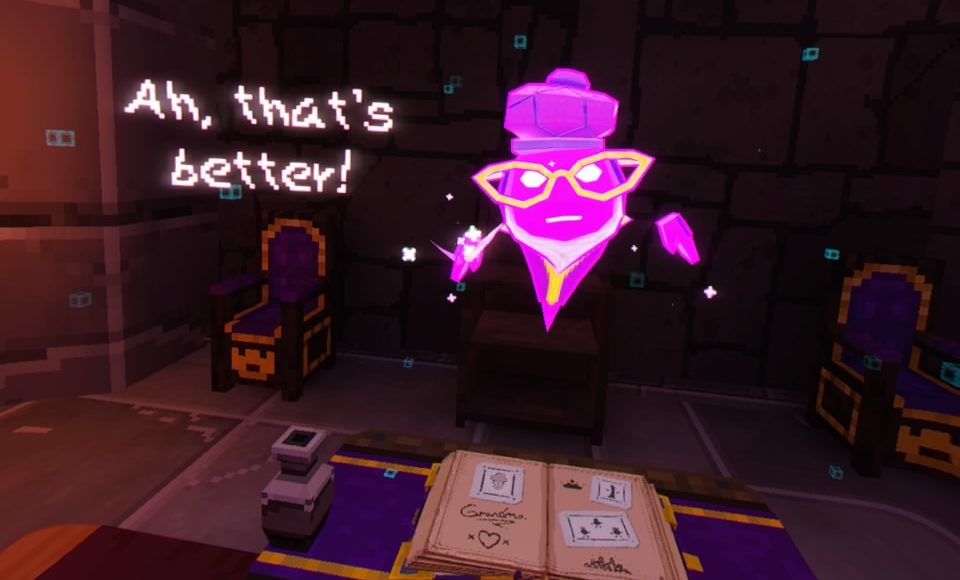 Meet your grandmother. She died and she screwed you over in the process

It’s move or DS4 here and the control set up is, if anything else, unique. Armed with 2 wands or 1 wandish looking DS4, you point at the ground and feet icons appear where you are pointing, whereupon tapping the walk button will have you move to that spot. To turn you need to hold the moves or DS4 in front of you and wave your hands in the direction you want turn, as if you were grabbing the environment and dragging it. It’s an odd system that takes awhile to get used too, and while turning never truly felt comfortable, after an hour of play I had settled into this scheme with the Moves.  I understand the need for this system with Moves, but this same system applies to the DS4 is just weird as the thumbsticks would be a way better option, yet are disabled.  With your wands you can also highlight items around the room and toss them, moving the more durable items or smashing the more fragile ones, which is way easier to do with the 2 moves then the single DS4 as the Moves allow for more multi-tasking. Almost every item is hiding loot you can suck up with your wand with the goal being to find the most loot in the limited amount of time each level provides. When you acquire enough riches, new rooms become available to pillage and you keep smashing, hitting and plundering. 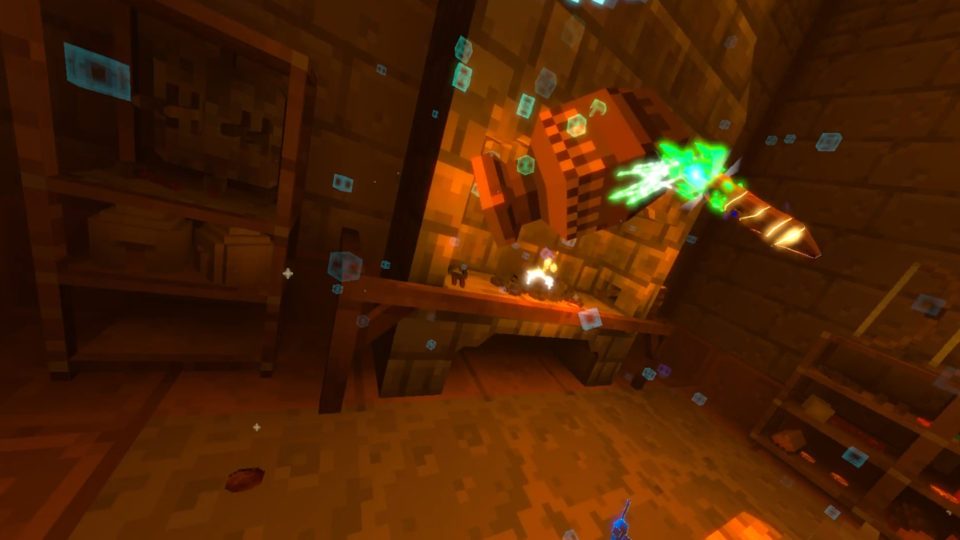 Tip em over or smash them, just get that loot!

Including the campaign there are a few more 2 player couch co-op modes you can play with friends. Scavenger Hunt tasks you with finding specific items or you can play together in free mode roaming the castle and smashinig stuff at your leisure. There are also 2 local competitive modes which pit the non VR players (up to 3) against the headset wearer. Scavenger Hunt and Poltergeist Panic are the modes with the 1st tasking the players to find a specific item the fastest and latter requiring you to find all the loot to free the ghosts in the castle.  The multiple couch co-op modes are a great addition and the matches are so short that it’s easy to switch off and change up your role.  It’s worth noting that the VR player is in 1st person while the non-VR players play in a Diablo-style fixed 3rd person camera allowing all non-VR players to see the action going on.  Also of note is that if you play multiplayer, the VR player has to use Move controllers to accommodate the non-VR players.

Smash Hit Plunder brings a very simplistic look to our headset taking inspiration from the blocky, super lower texture qualities of Minecraft and it’s 1 million clones.  Everything is very bright and colorful with a super family-friendly asthetic that is sure to appeal to casual gamers.  Character models are also simplistic but there is a charm behind the look of the game.  A plethora of items are scattered around to be smashed or moved as well as the inhabiting ghost that you may have to deal with as they will prevent you from gathering that precious loot. 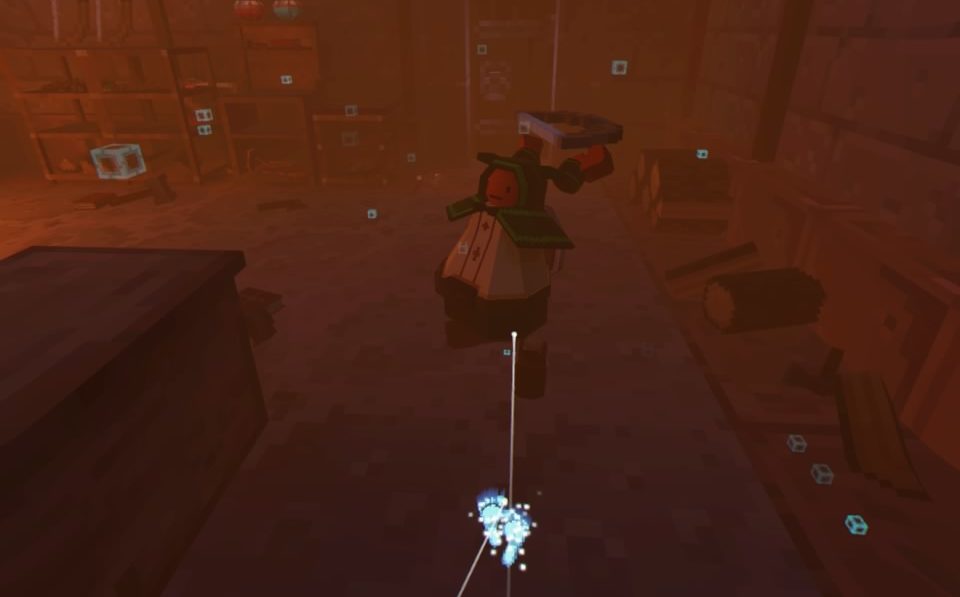 Have you friend help you out in the campaign, 4 hands are better then 2 as they say.

Matching the look of the game is the sound which reminds me very much of Nintendo games from the Wii era.  Characters are voiced but speak in a sort of simlish that gets a little grating, especially at the beginning when your grandmothers ghost drones on and on.  The music easily slides into the background and becomes almost unnoticeable until that round winds down, where upon some bleeps kick in a faster and faster as that stage comes to a close

The largest factor against Smash Hit Plunder is the base mechanic of just smashing stuff.  Don’t get me wrong, it’s fun, but after around 2 or 3 rounds, I was more then tired of wrecking stuff.  I feel like the concept for this game was taken from watching people mess around in games like Job Simulator and just decided to roll with that 1 singular mechanic.  Friends make the games more enjoyable, but even with the multiple ways to play, it all kind of feels the same.  The controls are also a bit of an issue as walking is easy enough, but turning in VR never quite feels natural and in panicky situations, it’s a pain to quickly move any direction other then straight which is made worse by the DS4’s disabled thumbsticks…if you play, stick with the moves.  I also encountered some issues with tracking when trying to highlight objects to grab or tossing objects to break, often missing what I wanted to snag or failing to smash an pot, even after whipping it down relatively hard.  Lastly would be the forced repeating of levels to unlock the next as you need ‘X’ number of loot to progress which further hammers home the games redundancy. 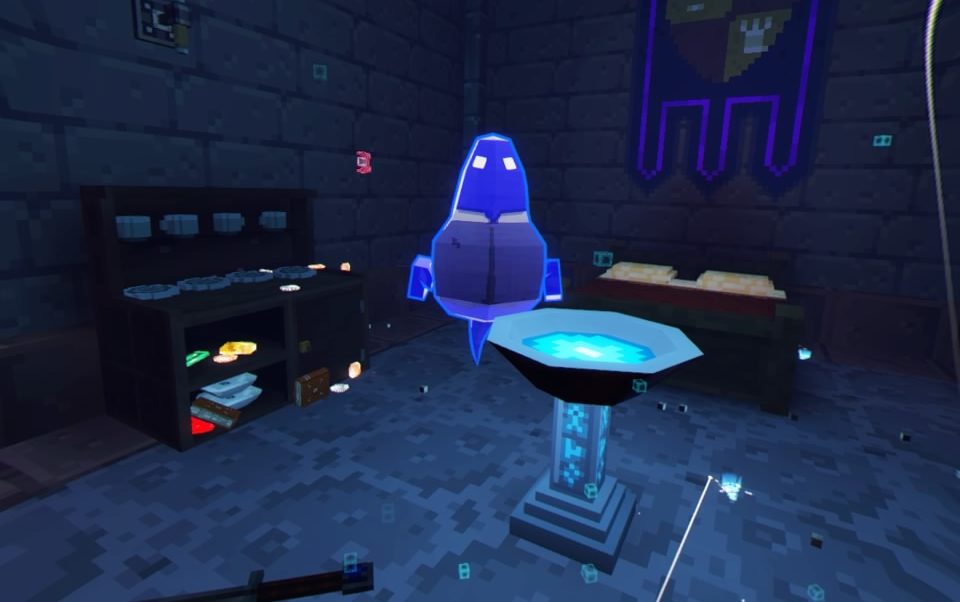 You are gonna have to deal with these guys if you want that sweet loot.

Smash Hit Plunder is a harmless light-hearted game that, for me, should really only be played with friends.  That’s not to say you wont have a good time by yourself, but that good time may only last 5 or 10 minutes before you are bored of smashing stuff.  Having a friend help you makes the campaign stages way easier and playing against those friends is just as fun…for a little bit.

What would I pay?  I’m honestly not a big couch co-op/vs guy so many of the games core features don’t really interest me.  That leaves the campaign and other single player modes which really just end up feeling mostly the same.  For me personally this feels more like a $15 game but if you are big into local multiplayer, you’ll probably more out of this then myself!

Triangular Pixels provided The VR Grid with a code for this title and, regardless of this review, we thank them for that!