Debuting in 2010 for Iphone(yup, that long ago) was a simple game utilizing the touch screen of that device.  Since that time,the game has seen releases on mobile devices, consoles and even arcades.  That game utilized 1 simple mechanic; swipe to cut the fruit and don’t swipe the bombs.  Arguably the best version of this game was for the Xbox Kinect which required you to use your whole body to swipe at the fruit on the TV.  That version has now been surpassed handily by its introduction into VR. 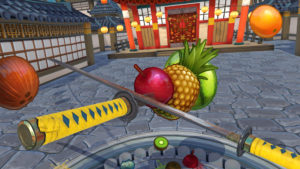 Every time I shish kabob’d a bunch a fruit, I felt so god damned skilled!!!!

The major difference between this and any other version is that the fruit, in VR, now comes at you from all sides forcing you to turn on the spot to see what’s coming at you.  Oh! and you are armed with 2 swords to slice stuff up!  The mapping of the swords to the motion controllers is near flawless and it really is a joy to cut up, skewer and bounce everything coming your way.  As with previous versions of the game, a few different modes are included here to mix up gameplay…a little bit.

Currently there are 4 modes available; Classic, slice fruit & avoid bombs.  Arcade, 60 seconds to rack up the highest score you can.  Zen, no bombs just simple slicing fun.  All of these modes have been in previous versions of the game.  The lone VR addition is Survival Mode, where flying canons float around you, shooting fruit at you from varying positions.  This is definitely the most challenging mode, physically forcing you to move and adjust you body accordingly to not miss any fruit.  It utilizes VR capabilities nicely, but I did find that tracking got a little messed up when you turned to far the left or right. It’s a minor complaint, but in a game where every point is important, its noticeable. 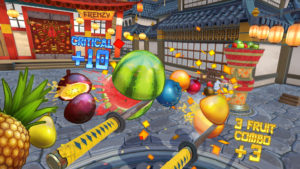 You are going to murder a lot of fruit in this game!!!

That’s basically it for the game.  Of course there are leader boards to make you wonder how in the world people earned such high scores as well as showing your personal best. What is here works great(like really great!) and if you loved this game on any platform you will love it in VR.  However, for those that are less concerned with leader boards and very short games(between 1 and 5 minutes) you’ll probably get bored and move on fairly quick.  With that said, showing this game off to non VR users will probably blow them away, especially if they are familiar with any other versions of the game.

What would I pay: Personally…$5.  That score is specifically for the content.  The game is built to be replayed a lot and if you are into that than this may hold more value for you.  These types of games just don’t hold my interest and an asking price of $20US seems really high for what’s here.