Unlimited creation is something many of us have wanted in gaming, in or out of VR.  Whether it be level design in an FPS or creating a giant castle in Minecraft, many people have the desire to create something of their own in the digital world and maybe even share it with others to inspire or taking in other creations to be inspired.  Virtual Art is a relatively new platform and SculptrVR is more than just another VR painting app as the sculpting tool used here allows anyone to create 3D forms in a matter of minutes. 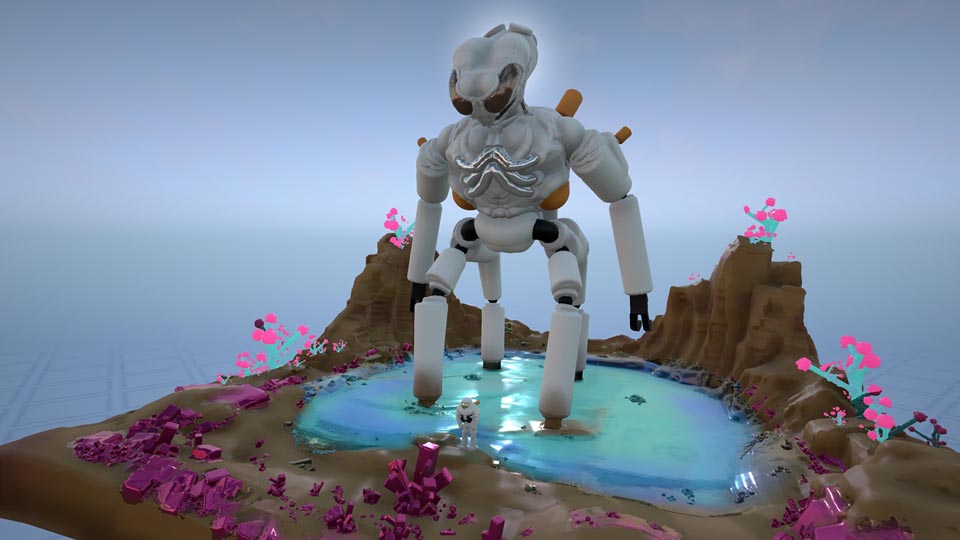 Make whatever want…imagination is your only limit

Unfortunately, there is no tutorial here, so you are thrown into the play space and left to your own devices.  You have a singular tool mapped to one of your move controls while the other carries your tool options (carving shapes, colors…).  From here you need to dig through the relatively small menu and figure out what each of the tools does.  Where this differs from other VR art games is the ability to sculpt.  Anything you make can be chiselled away and molded to make 3D objects.  Additional options like shaders, cloning, textures and a few other tool shapes are available but the tool you most rely is the spherical creation/carving tool.  The ability to greatly zoom and pull back on what you create allows for the smallest details to be included and some massive scale projects to come alive.  At the onset, the options for creation actually seemed to be very limited, but once you start messing around it’s apparent that there is more than enough tools at your disposal to create some impressive sculptures. 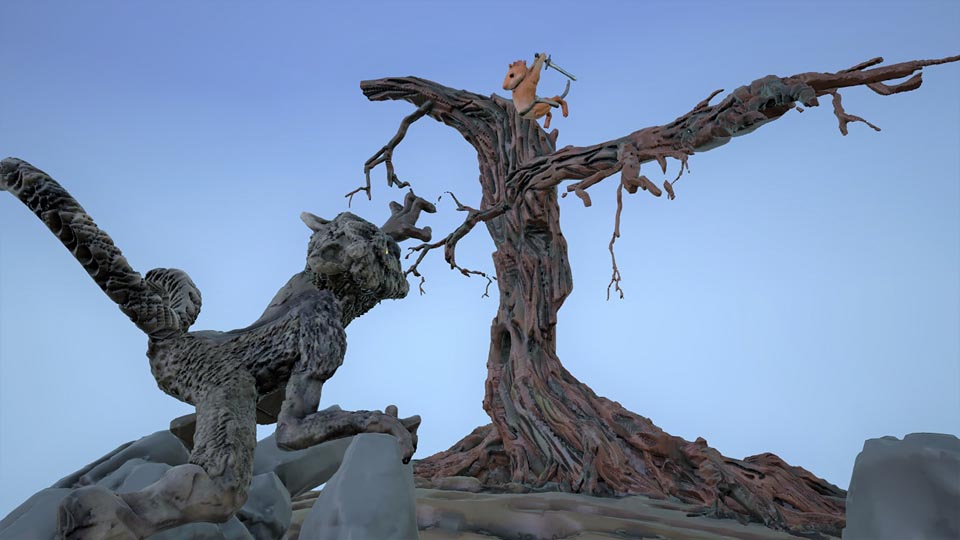 I wish I could make stuff this complex but I don’t have the skills…yet!

The look of the game is entirely dependant on you as the creator.  Build whatever you want, shade it, carve it, color it…it really is all up to you. The game starts you off in the cube area that you can create stuff in.   Once you get creating though, it’s apparent that there are lighting effects at play and one of the options available is to change the position of the light source, allowing for some natural shading options. It is worth noting that there is no audio included with the game so for those longer creative sessions, you may want to play or stream music from another app.

I’d be remiss if I didn’t address just how this compares to the PSVR’s other 3D art game, CoolPaintr and which one is “better”.  The short answer is neither.  It’s like comparing painting to charcoal drawings, they are 2 different mediums and are really dependant upon what you want your end product to be.  While these two games have many similarities, the end product ends up being quite different so if you are more into creating 3D models, SculptrVR is the way to go, but if you are looking for more artistic flair then CoolPaintr is the better choice…it’s on you! 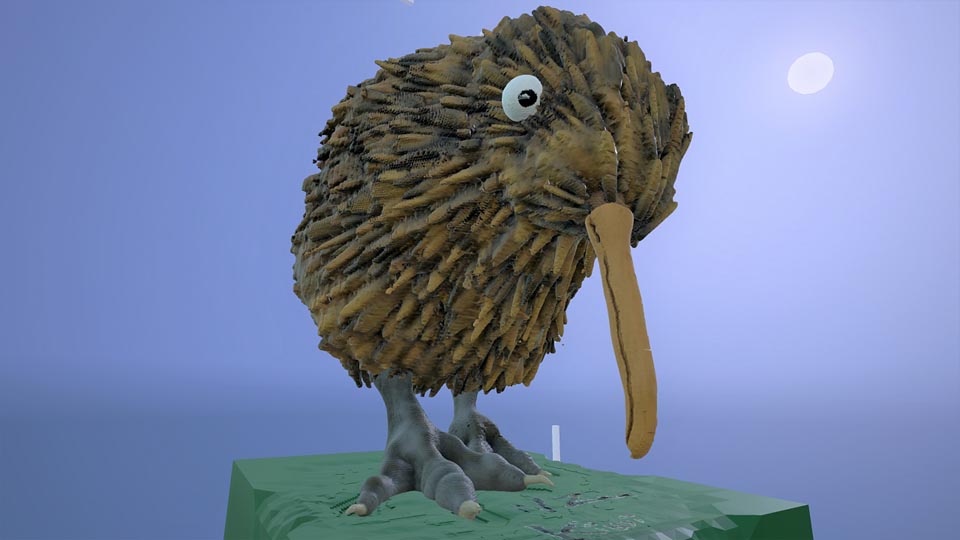 While there are enough tools to get the job done, I couldn’t help but feel like there could be a few more included to help streamline some of the creations.  You can chisel away at anything you want, but that can be messy at times and while there are options to smooth out your carvings, a few more shape options or maybe even some particle effects would help bring life to your creations.  I did run into the occasional issue of being unable to zoom in on areas I had zoomed on before.  I can’t quite nail down what the issue is, but it seemed like I was colliding with an invisible wall that wasn’t there before.  You can get around this issue by changing angles and repositioning, but when you want to add a detail and can’t for seemingly no good reason…it’s a little annoying. 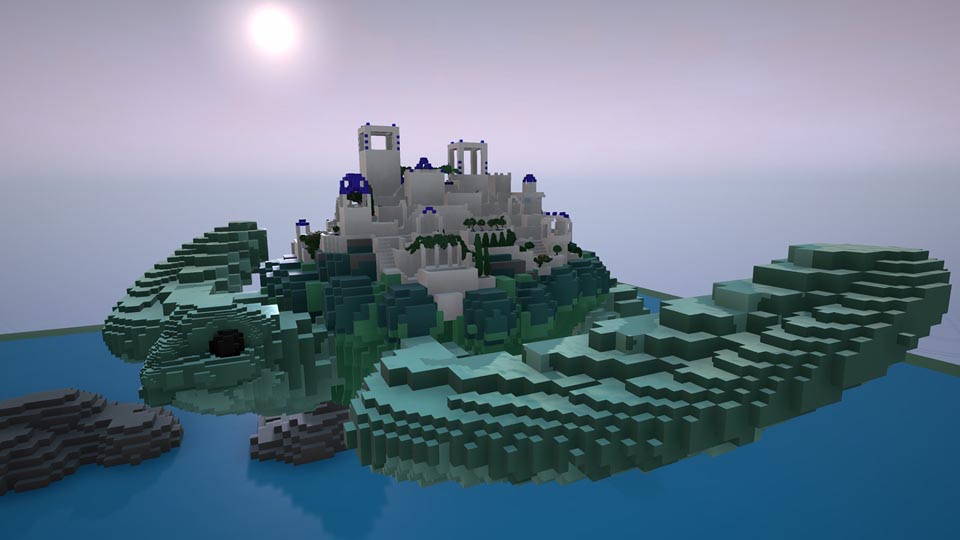 The lighting effects are pretty sweet

Like other games that rely upon your imagination and skill, SculptrVR’s largest strength is its biggest weakness.  The entirety of your enjoyment is up to you and if you have no drive to create something “cool” in a virtual space then I feel like this would be a giant waste of time for you.  For anybody else, if you have even the slightest inclination to start an art project in VR then I say pick this up as soon as you can, I doubt you’ll be disappointed.

What would I pay? $The $20 asking price for this is perfectly fine.  This is the kind of experience you can just get lost in and make just about anything you want…provided that’s your thing.

SculptrVR provided The VR Grid with a review code for this title and, regardless of this review, we thank them for that.