Voltron has been around in some way, shape or form since the 80’s and I remember as a chld being aware of the show, but never watching it.  Since its inception, Voltron has shown up in a wide variety of media and it’s most recent re-imagining is now on Netflix, and this experience/game is based on that iteration of the series.  In this you mostly play and view the story told through the eyes of Paladin named Lance (the guy in the blue suit) and while clearly being tied to the series, what’s offered up here is a contained episode from that series and not a full game. 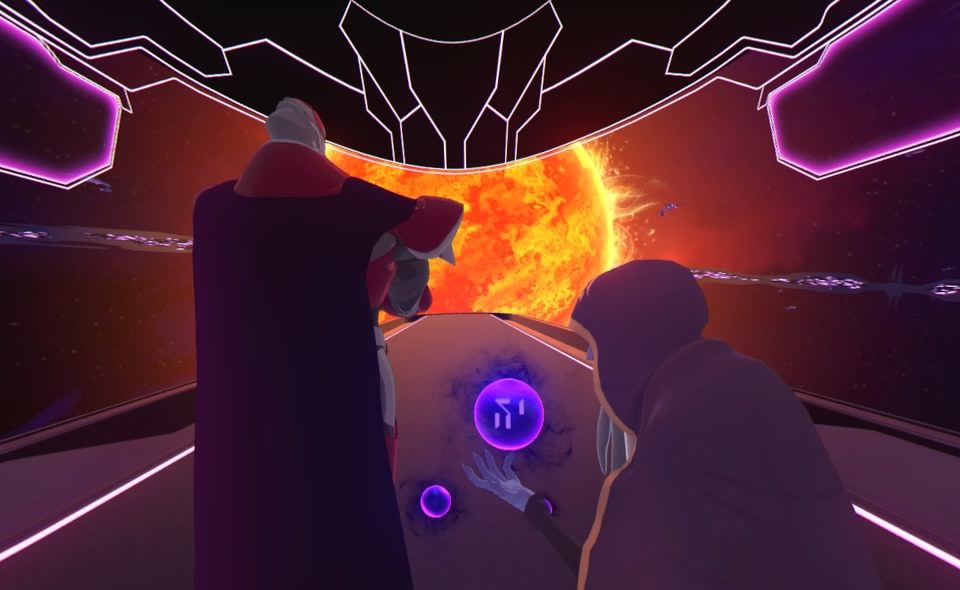 From the opening scene, I was pretty much in love with the presentation offered here!

VR Chronicles is half experience and half game with the actual gaming elements being very simple.  You do need 2 Move controllers as, at certain points, you’ll be solving rudimentary puzzles by twisting dials, pressing buttons and manipulating objects.  You’ll fly your robot Lion (named Blue) and certain points and shoot down enemy ships as well.  This is all handled by moving the move controls toward or away from you while steering in a limited space.  It’s actually a really good idea and felt quite natural, though under utilized in a game like this, and I hope some dev takes note of this control scheme.  Shooting is handled mostly by auto-aim and having you look in the general direction of the enemy while pressing trigger.  Like I said, it’s not the most in depth game, but there is a very good reason for that.

This is an extended episode seemingly taking place sometime during the current series run.  Enough backstory is given for you to realize who is good, who is bad and what’s happening currently.  Lengthy cut scenes are scattered throughout the game with some having you just watch events unfold somewhere else in the galaxy and many more occurring from the inside view of your ship/lion.  In total, I think this is around 45 min to an hour depending on how long a few of the puzzles take you so this amounts to around 2 episodes in length. 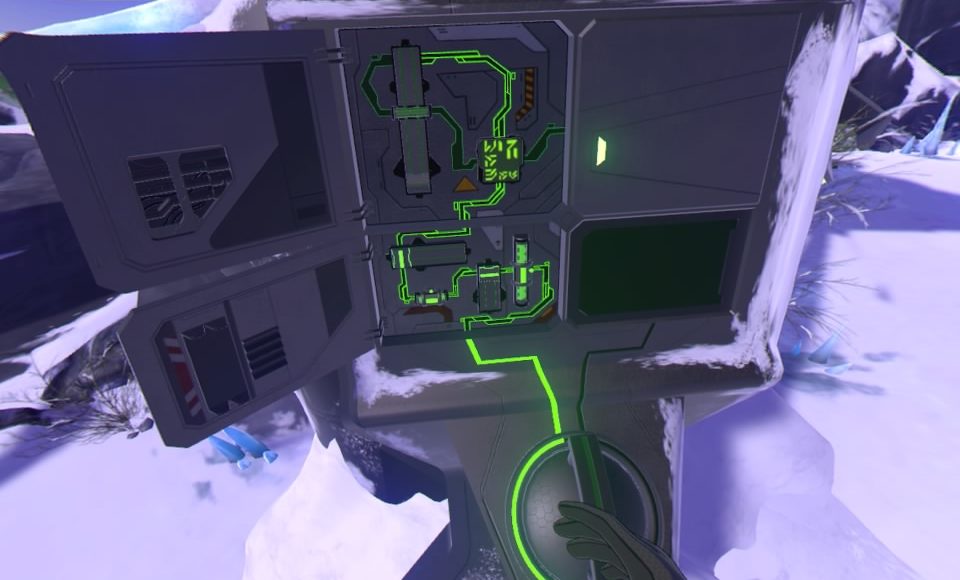 Most of the puzzles involve pushing, pulling, twisting or turning an variety items.

What shines here is the presentation.  I applauded Digital Domain’s previous VR effort The Monkey King for it’s crisp and clean (albeit dated) visuals and they are clearly learning what works and what doesn’t.  The Cell Shaded style utilized here just pops! Everything has an unparalleled clarity that I don’t think I have seen in VR before.  The 3D models are based on and taken from the series and it honestly looks amazing.  The opening cut scene had me marveling at the space outside the ship and character models used.  As you play through the game, environments change from an icy planet, space battles and a few other locales I won’t spoil.  When communicating with your team, they pop up in comic book panels of sorts, fully animated giving a profound sense that you have been placed in a show.  The opening playable area did force me to look backwards to view the action and the PS camera was none to happy with that, causing loss of tracking and some jerky visuals.  It only happened this one time, but given the limitations of the PSVR, it seemed odd to design that scene in this manner 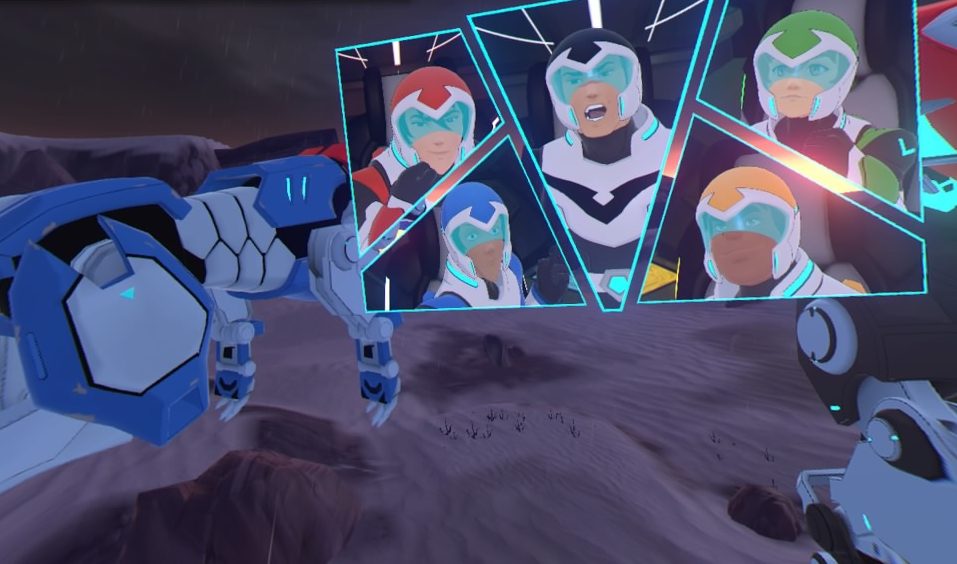 As a comic fan, I loved the stylized cut scenes.

The voice cast of the series have been brought over here and they are a talented lot indeed.  Lord Zarkon, the villain, oozes malicious intent and his lackeys are all over the top in fantastic ways.  Your lion-driving cohorts are also stereotypes that you have seen before, but that doesn’t lessen the accolades I’ll throw at them too.  Every character, even ones given little screen time, still feel like fully fleshed out heroes with their own nuances, both subtle and in your face.  Audio effects as well carry a high quality with everything sounding…perfect.  It’s really the only way to describe what your eyeballs and ears are experiencing.  The only issue I had with the audio was the repetition of lines during game elements when I took a little too long, but that’s a minor complaint.

Presentation aside, the gameplay elements fit the pace of the game well, but I fear that people might be disappointed by their simplicity.  While there are host of interactive sections throughout the game, they are only built to bring you into the story, not to challenge you.  The show this is based on is clearly aimed at children and young adults and I think in that regard, this is almost perfect for the younger age groups.  Anyone looking for a challenge will be sadly disappointed.  On more than one occasion, I was confused as to what the game was asking me to do, specifically the 2nd to last battle where I knew what the game wanted of me, but when I did it nothing happened so I though I was doing something wrong…I wasn’t.  Whenever I was unsure, I just messed around and figure out withing a few moments what I was required to do. 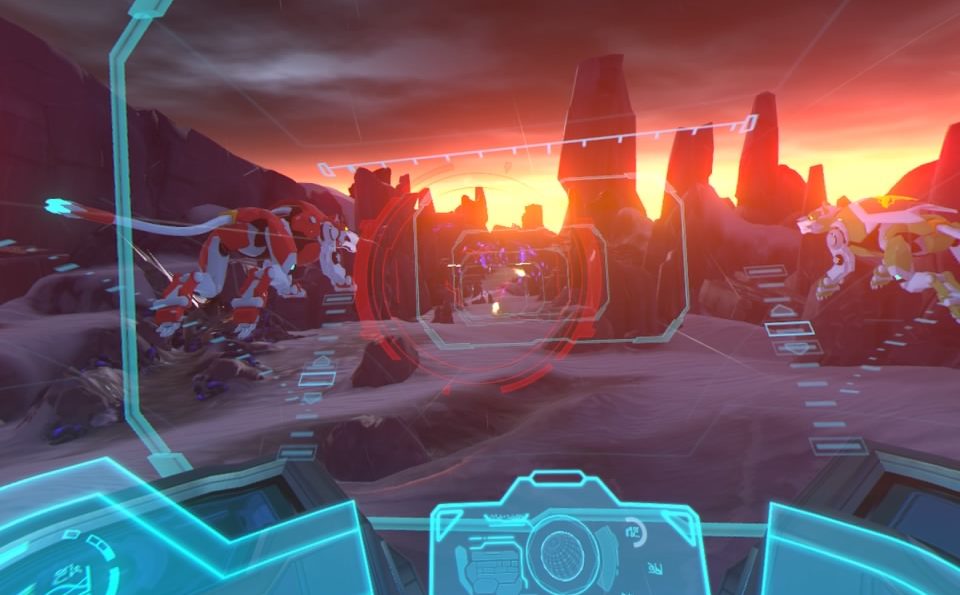 The First Person flying missions offer up a new way to control flight in VR.

After playing through this, I was curious to see what the show was about and was disappointed that the show is mainly hand-drawn with CG elements used to spice things up.  I was hoping the entire series had the same 3D modelling that this used throughout, just polished up a bit for television.  On that note, I watched the pilot episode and it was alright, so if you are curious about the universe presented here, the show fills in many of the gaps touched on in this chronicle.  The audio and visuals alone are worth the price admission though as a game, this will probably fall short of expectation.  That said, viewing this as an experience title instead makes for one heck of a ride and sets the stage for how these types of hybrid VR titles should work.

What would I pay? This is a tough one.  I think fans of the franchise will get a lot from this and for those looking for an interactive experience, this is one of the best currently available.  I think $14.99 may seem high to some, but given the quality of work that went into this tie-in, I have to recommend picking this up if any part of this review appealed to you.

Digital Domain Interactive LLC provided theVRgrid.com with a review copy of the game and, regardless of this review, we thank them for that!