Job Simulator came out during PlayStation VR’s launch and other than dabbling with the demo, I skipped what was argued as being one of the best VR games of 2017 and topped sales charts for much of 2018.  You can read Gary’s original review here which lauded the game for it’s emphasis on freedom and fun.  Much time has past since the original release and after delving deep into VR for the (almost) last 2 years, I figure it’s time to see just what all the fuss is about. 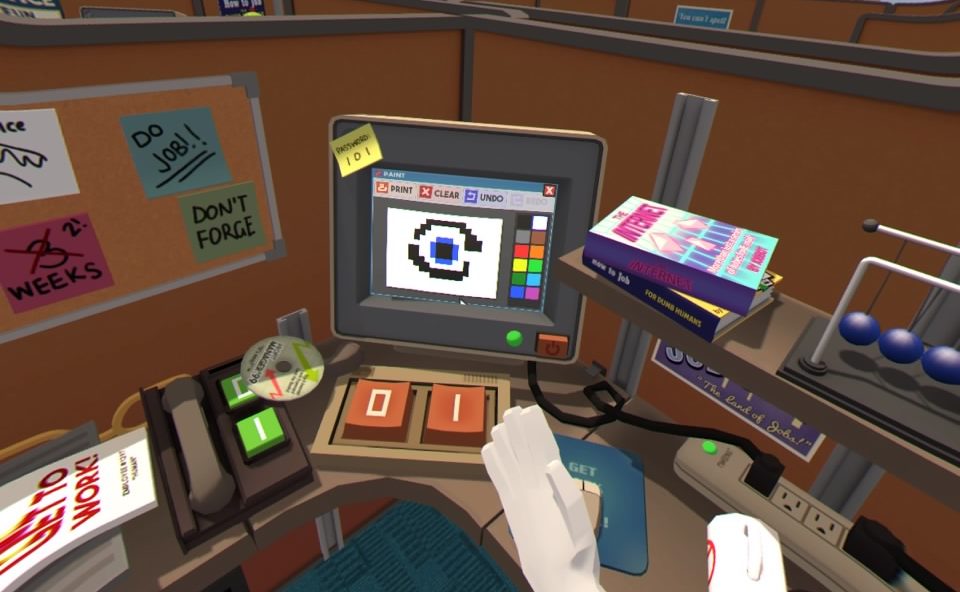 Like most office jobs, you spend a lot of time pretending to do work!

If you have played any game that maps hands to your Move controllers than you know exactly how this plays.  Each of the 4 stages is laid out differently but ultimately, you just grab an object or push a button to perform a task.  The tracking is spot on, provided you follow the calibration instructions and the in-game physics allow you to throw items and mess around with whatever is at your disposal.  Each job is a stationary affair with almost all the action taking place within 180 degrees in front of you so loss of tracking is rare.

The premise of Job Simulator is relatively simple; it’s the future and robots rule the world and the simulations you participate in are actually in a museum.  The robot overlords don’t quite grasp the concept of jobs, so each occupation you mess around in is a parody of what we know today.  In the office you must photocopy documents, mess around with finances, hire and fire employees and a bunch of other tasks that play out in a very comedic fashion.  As a chef, preparing a variety of meals for patrons is the core mechanic there while a store clerk involves a little food prep, sales and interaction with wide variety of customer requests.  Lastly is the auto mechanic which offers it’s own comedic look at that industry. 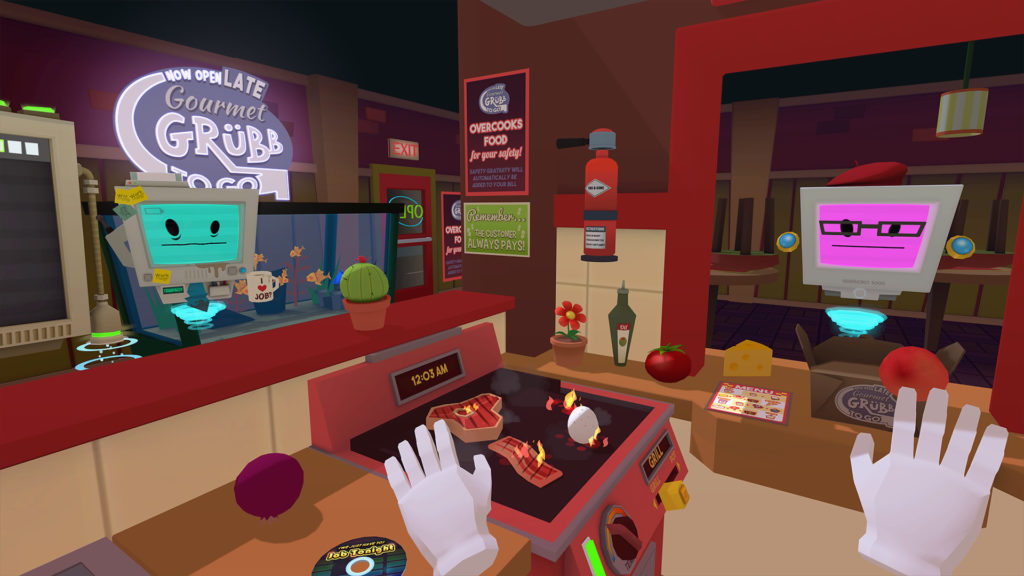 Working the night shift in the kitchen can get out of control!

The late addition to the game is Infinite Overtime Mode which allows you to play any of the 4 jobs during the night shift.  For as long as you want you can just play while the game constantly throws task after task your way.  It’s a great way to extend the game and does significantly bulk up the time you could spend here and still experience something you haven’t seen before.

The presentation in Job Simulator is next to flawless and while the visuals may be on the simpler side, they look fantastic.  Everything is crisp and clear and each stage greatly mixes up the environments.  Hidden in each stage are a slough of easter eggs and random things to do so emphasis on just messing around is clearly a motivation here.  The robots look like floating TV’s and the re-creations off each job offer their own, sometimes hilarious, parodies of modern cultural staples.  The audio as well is spot on and is loaded with dry humor and constant jabs at how we live today.  In this regard, Job Simulator shines like few others. 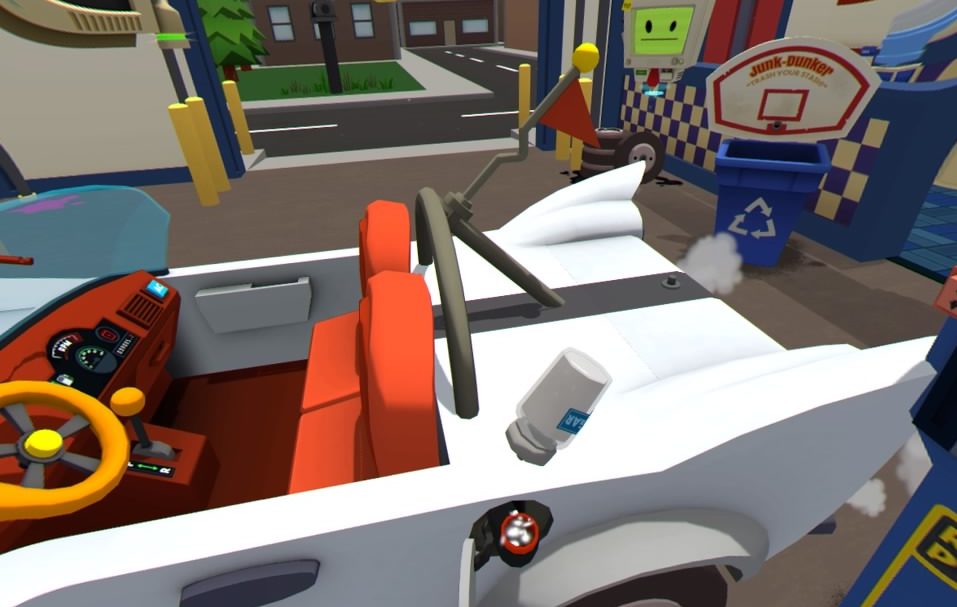 With all that praise out of the way, I don’t think this has aged quite well.  Like I said the presentation is nearly perfect, but what this game lacks is a reason to play besides the humor.  Every job has a bunch of tasks you need to perform, but there is no pressure to do so in any particular time of fashion.  The emphasis on freedom hinders motivation.  After I completed each task (roughly 30 to 40 minutes each) I was bored of the gameplay and needed a break.  The game just became more of a chore than anything else and even though each stage changes up the setting, they all felt the same.  I think the reason I feel this way is time.  This came out over a year ago and was tailor made for newbies to VR, which at the time was almost all of us.  After playing games like Dead Hungry and The Diner Duo, I greatly missed the pressure of failure here and I know that may be just me.  By design, this is perfect introductory content to VR and if you are like me and just passed on playing this upon release, you may feel underwhelmed by what’s actually here. 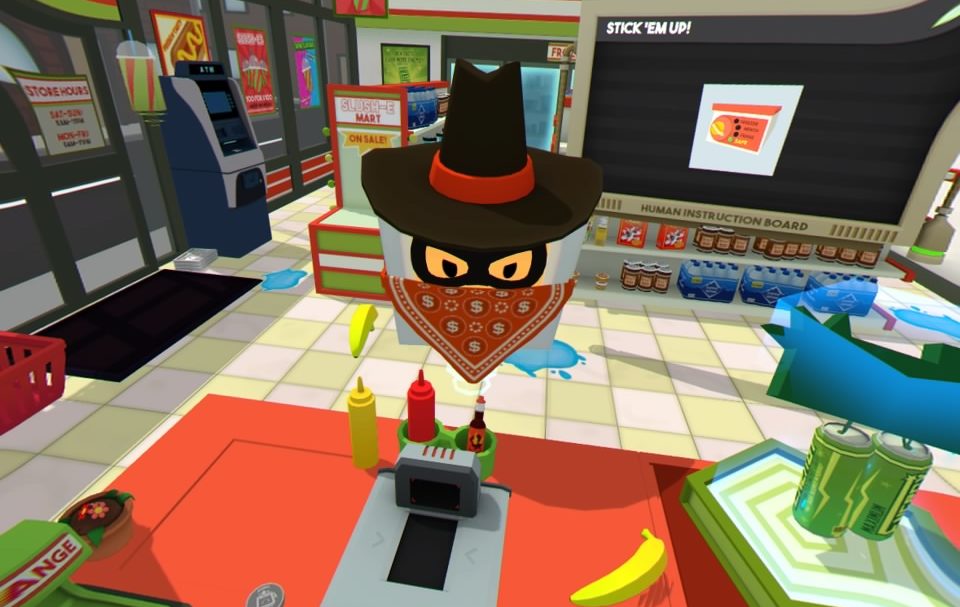 No clerk simulation would be complete without being held up at banana point.

Job Simulator is still a solid title in VR, especially for those just dipping their feet VR for the first time.  It would be nigh impossible to get sim sick here and there are a tonne of laughs to keep you, and anyone else watching, amused.  Just messing around is great fun and when you find something new to play around with, it’s a joy.  My biggest issue is a lack of challenge, but the presentation is amazing here.  I may not have been blown away by all the content in Job Simulator, but I still can’t deny how often I was amused by the actions I had to perform throughout the game.

What would I pay?  I paid $20 for this and don’t feel ripped off.  If I could do it again, I’d play this for the first time with a room full of friends and trade off as it’s just as much fun to play this as it is to watch others mess around.