FREEDIVER: Triton Down released early 2019 and delivered one of my favorite VR experiences of all-time utilizing swimming mechanics as you navigated through a capsized ship.  You play as Ren Tanaka, a free diver trained to hold her breath for extended amounts of time in deep water.  While your ship is out on the ocean, a rogue wave flips it over with you trapped inside forcing you to swim to safety as the ship sinks deeper and deeper into the abyss.  Unlike the PC version of the game, this extended edition contains new content and game mechanics that flesh out the game and story beyond its initial release. 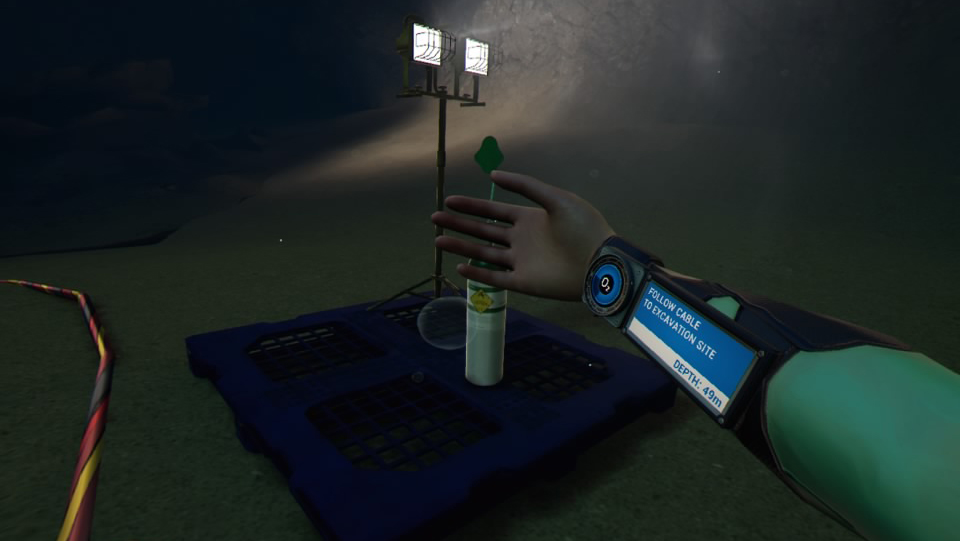 Always keep an eye for the nearest canister of air.

You need 2 Motion controllers for this one and for the best immersion you need to physically perform swimming motions to navigate the campaign.  Should your arms get a little tired, you can switch control schemes so just holding the trigger buttons propels you forward, which works just fine but with that mode, click-turning is the only option which is disappointing.  An opening tutorial teaches you to swim using both arms to push and pull in the direction you want to move and using 1 arm to pull yourself left or right to turn.   It’s not just about swimming as you can grab specific items to aid you on your trip to safety like axes, doors, handles as well the walls, which will be needed when you have to fight faster water currents or just climb around obstacles.  On your right wrist is an oxygen meter that alerts when you are getting low on air and beeps when you catch your breath.  Air pockets can be found throughout the ship, giving you respite from tense bouts of swimming with oxygen bottles conveniently scattered around as well.  From the get-go you need to avoid drowning and other obstacles as the water rises and time runs out to get to freedom or sink with the ship.  A flashlight has been added to the game as well some new areas to explore that are bathed only in darkness save for the your little light adding extra levels of tensions as you scramble to find your way through these darker sections, constantly keeping an eye out for an exit or a pocket of air and the audio logs scattered throughout the ship. 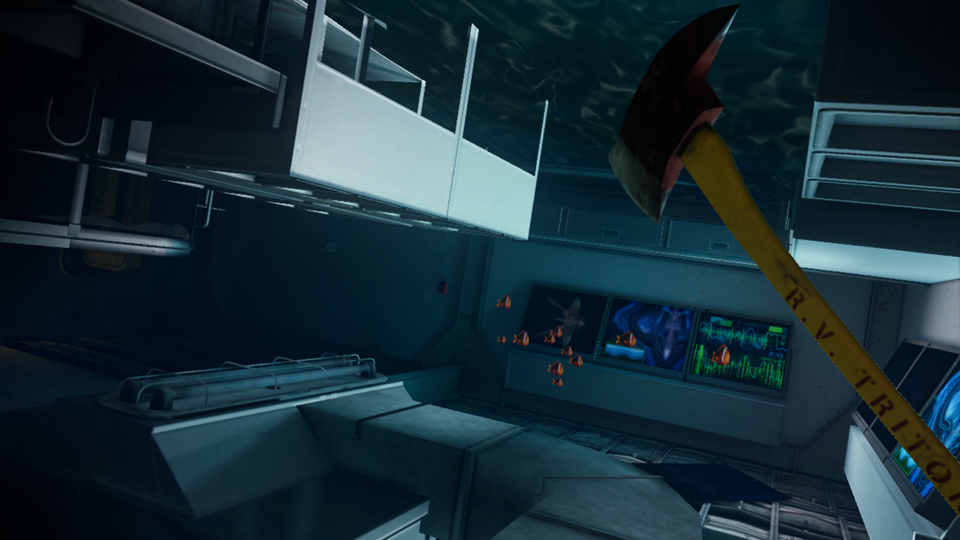 Swimming through an upside down ship is pretty slick.

FREEDIVER looks great in the headset with some nice-looking water effects and a nicely recreated ship…that’s upside down.  The ship looks great with everything strewn about and water pouring in from seemingly everywhere.  The ship carries a ton of detail and looks authentic with the game making a beautiful transition from PCVR to PSVR.   It’s unnerving when you stumble across your first drowned shipmate and breaking up the action are cut-scenes that play out after you *spoiler alert* survive the capsizing, having been rescued by the coast guard who in aggressively interviewing you about the events leading up to your escape.   You’ll swim through various parts of the ship from crew quarters to engineering sections or travel through claustrophobic vents or dodge pieces of the environment as they tumble toward you which makes for some harrowing situations.  The opening tutorial takes place in a cavernous reef and I spent way too long in there just checking things out, admiring the view as the fish swam by and overall, I was impressed by the look of the game. 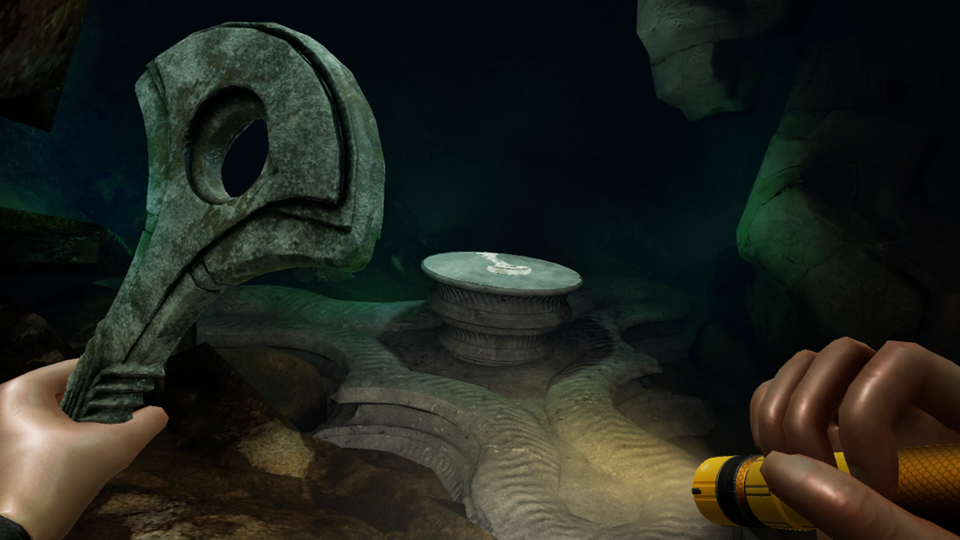 The revelations in the opening stage are very intriguing.

There are 3 voice actors in here and they all do an excellent job at delivering solid performances.  The star attraction in this one however is the environmental noises that the makes as it slowly sinks.  The creaking of steal, an incoming wave, flowing water and every bump against a wall elicits a wonderful sense of fear and claustrophobia.  Throughout the game, whenever you catch a breath, Ren will talk to herself and it’s worth listening too as once you dive back in the water she stops talking and her reactions to the situation add a lot of weight to the story. Part of the extended edition are audio logs hidden throughout the ship that shed a little more light upon the events leading up the ships demise and are worth looking for.

For everything FREEDIVER does right, even with the “extended content” I was still taken aback by the shorter length…roughly an hour and half and given what otherworldly revelations are told during the story, initially revealed during the tutorial/opening s so it’s barely a spoiler, I expected more narrative.  In fact, the way this game ends suggests that there is more to come.  Despite the somewhat abrupt ending, I enjoyed just about every minute in this linear campaign.  Anything you can and need to interact with has the option of being  highlighted with a blue hue so you know you have to pull, push or grab it and if you do get stuck while that setting off, a quick jump to the options menu could alleviate your issues and clue you into your next step.   Should you perish, the game auto saves and puts you back at the last checkpoint typically very close to where you died.  That’s not to say death isn’t a constant threat as every time I dove underwater, I was hectically looking for the next air pocket or oxygen tank.  It’s not perfect and I had troubles grabbing items and walls forcing some minor frustrations though for the most part everything worked as it is supposed too.  Those minor issues aside, I really enjoyed swimming through the upside-down ship and cinematic way the story was told. 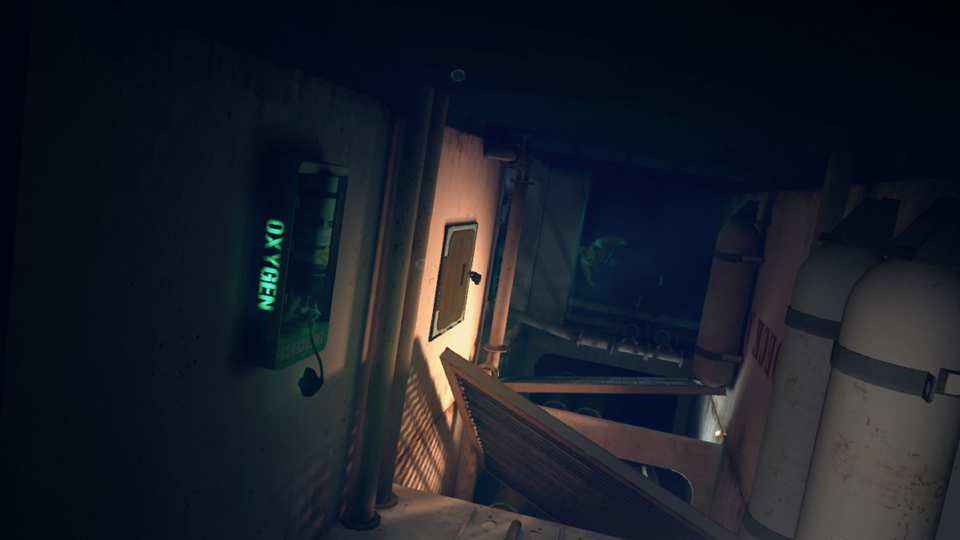 It’s unnerving to be in this ship all alone.

FREEDIVER is one of those unique experiences that showcases just how cool VR can be.  Triton Down gave me feelings akin to when I played Downward Spiral, Detached and Rush VR offering a new, refreshing and immersive way to play games in VR.  Swimming though this vessel, always keeping my eye on my oxygen and looking for my next exit and breath of air kept me engaged from the opening moments all the way to the games ending.  The story feels like it’s only just begun, and I can’t wait to see what the next chapter in FREEDIVER delivers.

What would I pay?  This is a $15 on steam and well worth it.  My issues with the game’s length are rendered completely moot by the environments, mechanics and immersive control scheme and I enjoyed my time in this sinking ship.

Archiact provided The VR Grid with a press code for this title and, regardless of this review, we thank them for that!