Fishing is one of those types of games that should just work in VR.  Ever since I held a rod in my hands back in the days of the Dreamcast I thought how much sense it just made to have these games in a virtual environment.  Dream Angling has done a little more then just make a fishing game and instead offers up a (sort of) relaxing story mode in some fantasy environments stitched together by a dream-like story book…I know it sounds odd to me to! 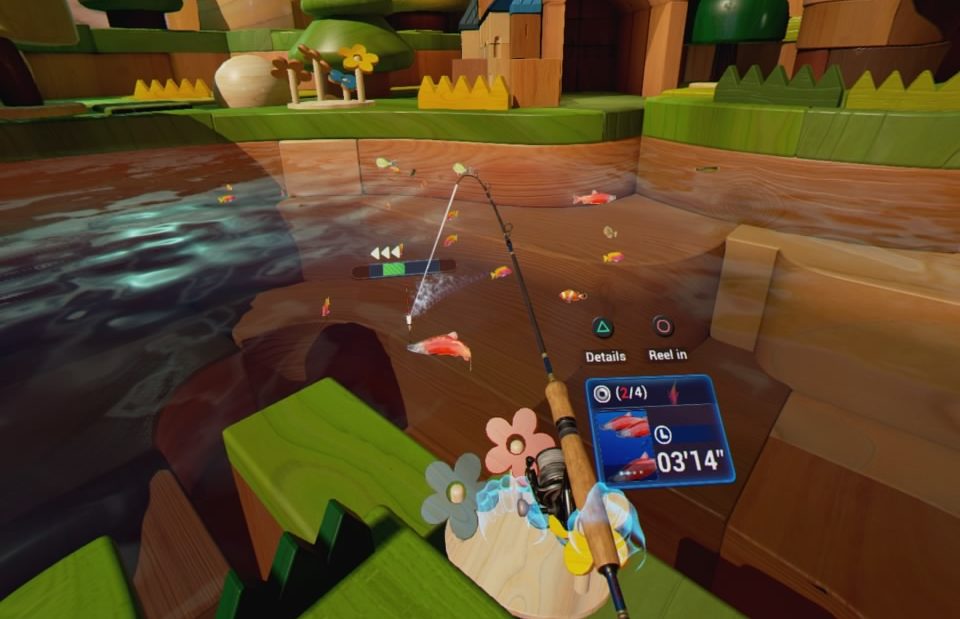 If you are looking for a little more immersion then get your Move on!

Using 2 Move controllers this plays very similar to last years Final Fantasy Fishing game.  One hand holds the rod while the other is used to wind the reel using the real motions you would use if you were fishing IRL…more or less.  An exaggerated flick of the wrist casts the line and more often than not, the lure landed really close to where I was aiming.  DS4 plays similarly only with button presses and head tracking to guide the line which is a much easier way to play.   Dream Angling seems to want to be a relaxing experience and with the Move controllers, it’s anything but! Having to reel while moving your rod left or right to keep the fish on the line is a task on its own and after a few rounds, even though it was fun, I was getting little tired of that control option. When combined with some of the goals for each stage becomes a near impossible task.  Once you reel a fish in you use your magic wand (it’s a dream!) to catch the fish and score the points needed to finish that stage.  If you are at all interested in not only advancing the story but just having a way more worry-free time, it may be less immersive, but the DS4 controls are the way to go.

The fantasy setting provides something a little different from the other fishing games we have seen before.  The first few stages all take place in a toy world where giant toy blocks and other large child’s playthings are scattered around the small pond you are fishing in.  It’s a neat esthetic and thankfully it all looks really good and carries a lot of details.  The other stages include a mossy woodland and a steampunk cityscape with each looking quite good while still having that cool, relaxing vibe.  Your home menu is in an attic where you can look through a telescope at the moon and stars and contains the story book used for the campaign. The water is serene and calm and looks very inviting making for very pleasant and impressive visuals that immediately pulled me into these dream-like levels.  My one complaint is that the fish often pop in and out of the game which did hamper not just esthetic, but the gameplay as well. 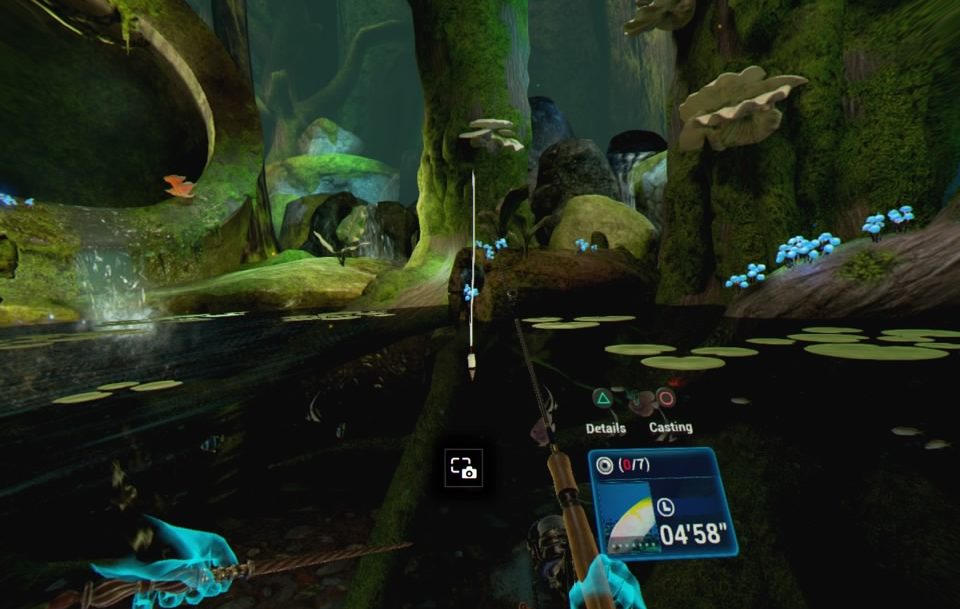 Out of the 3 different themes, I like this one the most!

The music, like the visuals, eschews a very relaxing vibe and even though it may just be a singular track for each theme, it’s so damned soothing that I never once got annoyed by it.  Sound effects are subdued and fit wonderfully with the relaxing atmosphere.  The little ‘sploosh’ as the lure hits the water or the splashing as you reel in a fish make this feel like a laid back fishing sim.

Each stage has set points to achieve or set goals to get, within a certain time limit.  Early stages just require you to catch a certain value of fish with smaller fish being worth less then larger ones while later stages may require you to catch a specific breed of fish.  The story mode plays out with you selecting pages from a book with each being represented by a lost item.  Once you complete a stages goals, that item becomes unlocked, a new page in the book is filled in and you get to read about a brief memory tied to that item.  Each level has item choices, but you can’t go back to try the other options once you succeed, making multiple playthroughs a must to get the whole story.  Each ‘path’ you choose in these memories also unlocks a constellation at the end of the game, so to complete the entirety of the game requires many, many plays.  There is a challenge mode where the goal is to rack up the most points in a set time and offers the same gameplay but gives you items to unlock that make the game a little easier with temporary power ups to help boost those scores.

It’s not all great.  Some of the goals set during stages are frustratingly difficult to attain leading to multiple retries of the same level… with the move controllers anyways.  DS4 play made every stage a breeze and once I switched to that control method, I never went back to the Moves.  While each stage has new goals, they all kind of blend together after awhile making long plays feel a bit longer then they should.  While the replayabilty to unlock all the pages is there, an option to just go back and unlock one missed page  as opposed to having to start a new game feels missed and a forced way to extend gameplay.  Lastly is the pop-in/out issue I mentioned earlier which is grating when you cast your line right at the intended target, only to have another fish magically show up and grab the line instead. 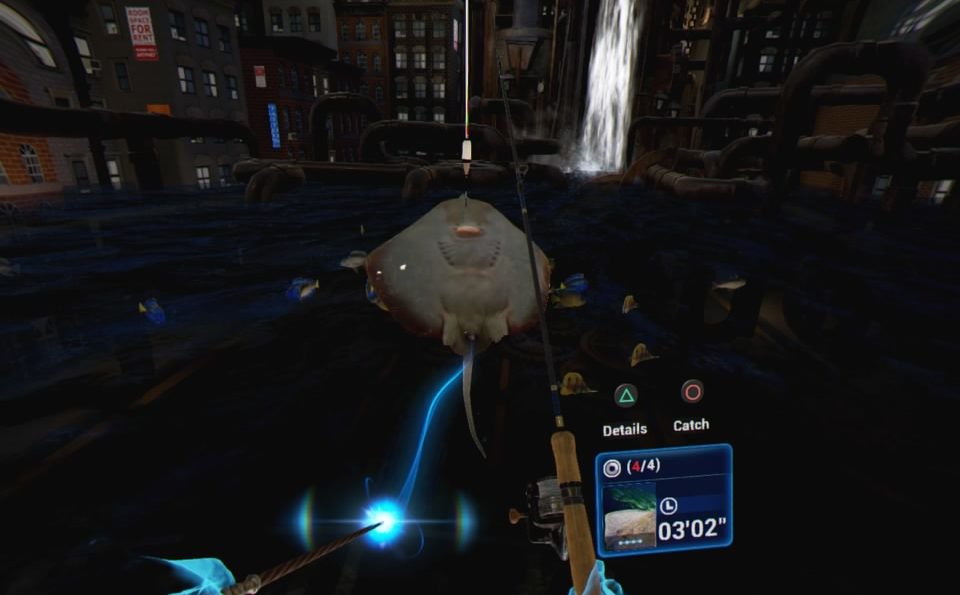 Yup caught a sting ray in a steam punk city with my magic wand.

Dream Angling is still a great fishing game, even with the issues I mentioned above.  The story was a nice little touch that added to the game, though the amount of replay required to completely beat the game will cause many to just move on out of boredoms sake.  It’s not bad by any stretch, but the content just feels unnecessarily and artificially inflated.  Still if you are looking to chill and relax in some surreal settings or try your hand at the more simulation-based Move controllers, this is still a solid fishing title

What would I pay? The $10 is an easy ask and may be some of the most bang for your buck on the PS Store, especially when compared to the other fishing games available.  You can easily come in and play for a round or 2 and bow out and still feel like you have accomplished something.