Arizona Sunshine has been a staple for all the major headsets since it’s original release back in late 2016.  For those who don’t know, this a campaign-based shooter where you take on the Zombie horde in an attempt to find your way to salvation.  In this review I will also be covering both DLC packs so let’s get to it! 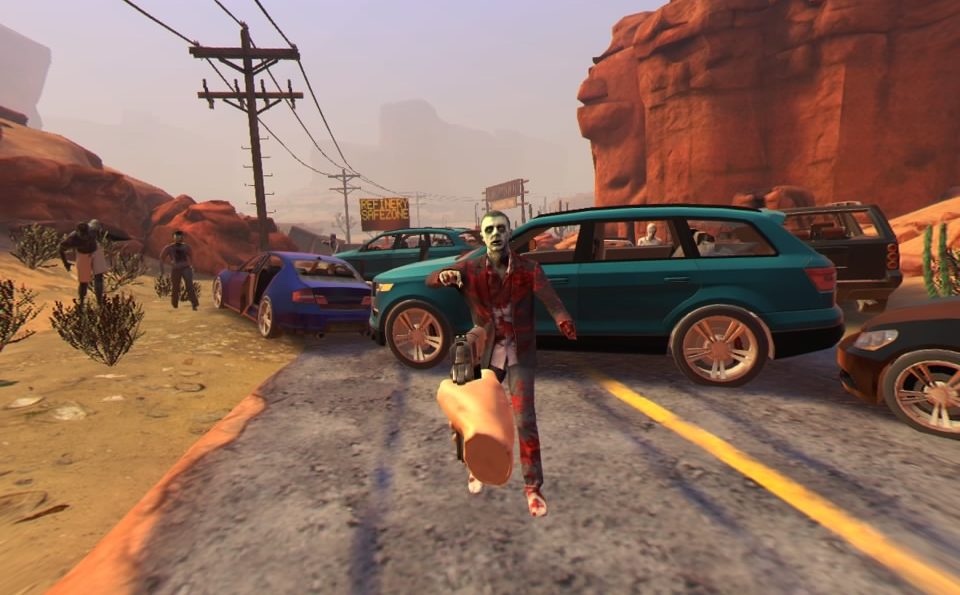 The horde approaches…don’t panic or your guaranteed to miss shots and wind up dead!

On the PC side, this controls like most FPS’s with a few unique uses of VR like being able to store your weapons on your belt or bring your empty gun up to your chest for a quick reload. On the PlayStation side, this is one of only a few titles that supports all 3 major control methods, ensuring that you will find the right controller fits your preferred way to play.   Thanks to a wide variety of comfort options you can customize the game to your liking allowing for anyone to jump in.   The DS4 methods play very much like it does in Farpoint, having you move your hand in real life and up to your head to aim down the sites. Move controls are also unsurprising, though with the limited buttons available they make for a rather clunky experience, especially when situations get rough and you are forced to flee in a panic as getting your bearings can be an absolute nightmare if you lose them.  Last would be the Aim controller, which worked wonderfully and was my controller of choice.  It plays exactly as you would expect it would, allowing for the most realistic and intense experience out of the 3 PSVR control types.  Playing with the Aim controller changes the game as only 2-handed weapons are available though that is the only change between controller options.

Arizona Sunshine looks solid on the PC and not shabby on the PSVR though the games age is starting to show this late in 2019.  Zombies lumber around and stumble but only carry a handful of animations and come in a smaller variety of models then you would expect.  You’ll see the same zombies over and over with subtle changes which does hamper the immersion factor though when the horde is coming at you, you’ll soon forget about that as you focus on surviving.  The main game take place largely outdoors so you’ll be treated to the arid landscape that is Arizona complete with rocky canyons, run down building, mines, trainyards and a few more locales.  The Deadman DLC puts you in the shoes of a different protagonist as you infiltrate a military base which is largely indoors.  The latest DLC ‘The Damned’ puts you once again in the role of a soldier tasked with turning a dam on and contains some impressive outdoor views but takes place mostly inside the dam where you visit offices, tourist areas and the more industrial guts of the complex. 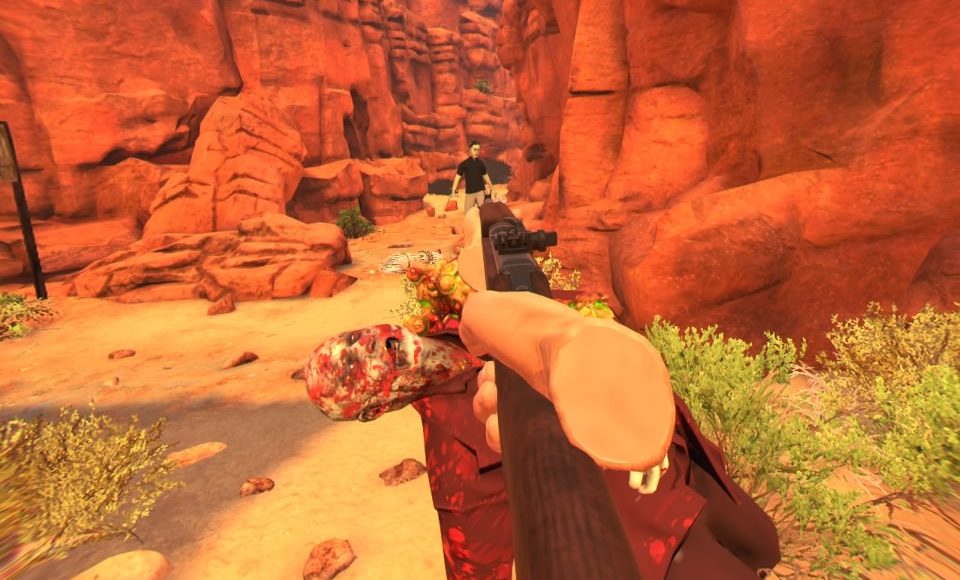 Lining up those shots will take some practice

he audio is pretty decent with a mix of lighter and heavier tracks matching the action taking place or accompanying your explorations when you search your surroundings.  The protagonist in the main game talks to himself in an effort to keep himself sane while constantly spouting lame dad joke which I found amusing, but some may get a little tired of that type of humor.  The DLC content removes the morbid comedy with you playing as military personnel but either one still narrates the campaign or may be in contact with other people helping to push the story along.

As you progress through the world, you’ll be forced to explore every car trunk, file drawer and anything else that could contain your oh-so precious ammo.  The ammo is plentiful but the Zombies you face can be bullet sponges unless you master the art of the head shot.  This is key to both your survival and your enjoyment of the game.  On the PC version of the game, sites on the weapons are realistic making headshots a challenge with smaller weapons but it never felt unfair and after a little time in the game, this got easier.  On the PS side, things are a little easier as a post-launch patch swapped realistic sites to for some really easy to line up laser sites.  No matter which version you play though the game feels largely the same with the subtle gameplay differences being near inconsequential. 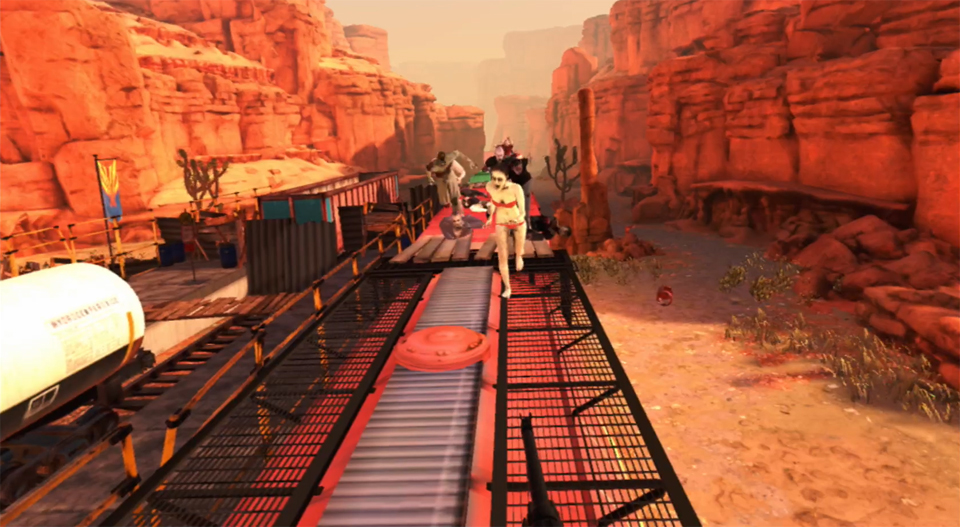 Always be ready for a horde rush!

Besides the single player content, a few other play options are available; campaign co-op which has you playing through the storied missions with an online brother in arms. The host acts as the main player so it’s his job to trigger items and events to progress the stage, the second player is kind of just there for the ride and to help against the undead swarm.  The other mode is Horde, which pits you and up to 3 other people against wave after wave of zombies as they come at you from all sides in 1 of 3 very different maps.   Having a friend(s) in the apocalypse is great, but at the time of this review there doesn’t appear to mic support in the PSVR version, so you are left with silently miming to each other in a vain attempt to communicate.

The campaign is relatively short, clocking in at around 4 hours or so on medium difficulty with the Deadman DLC taking around an hour and the Damned running at around the 2-hour mark.   Each separate campaign has you on a very linear path from one point to the next which is not a bad thing as most barriers feel natural given the context of the game; cliff sides, car pile ups and so on, though I did encounter a few invisible walls, which were a little off putting.  This plays like a very familiar lone-survivor type shooter; follow the path before you, advance the plot, fight some Zombies, continue to the next area and repeat.  Your going to spend a tonne of time rummaging through trunks and drawers…thankfully no one ever seems to lock these in the zombie apocalypse and that aspect lessens somewhat in each DLC pack. 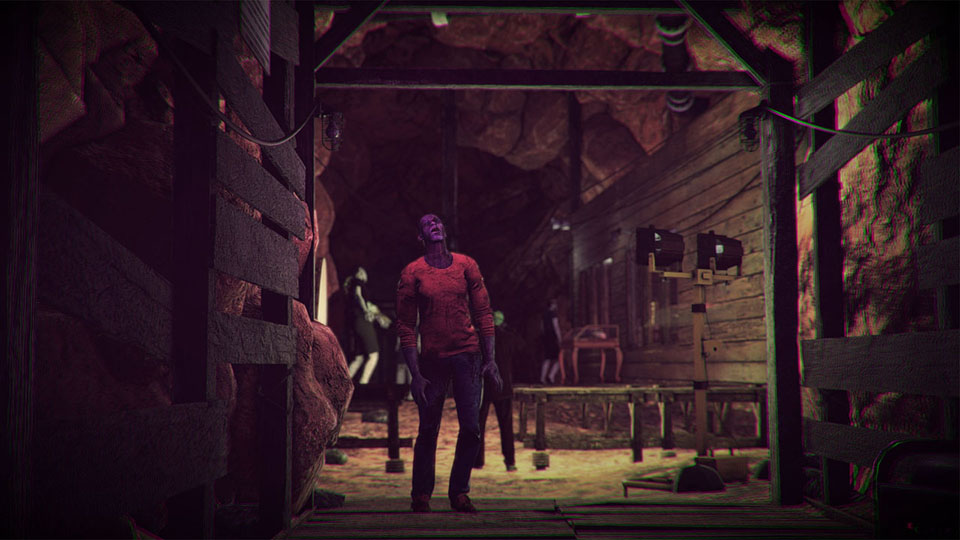 Playing through the mine stages is a little freaky

Arizona Sunshine may be showing its age a little with it’s simplistic and repetitive action, but I can’t deny how much fun I had diving back into this game.  I highly recommend playing with a friend but even playing solo I enjoyed honing my headshot skills.  The DLC really just expands the campaign with familiar gameplay in new settings but the changes in scenery are welcome with the game as a whole delivering a quality experience that’s only been improved since its original release.

What would I pay? I’ll preface this by noting that this game goes on sale often but the asking price of $40 isn’t a crazy ask.  Single player or co-op campaign and horde mode give this game some legs.  Add in $2.50 for Dead Man and $5 for The Damned DLC and you get a 7-hour campaign for shy of $50 and that isn’t to shabby.

Vertigo Games provided The VR Grid with press codes for this title and, regardless of this review, we thank them for that!