Immersive Education has given us 2 VR titles that I enjoyed in Apollo 11 VR and Titanic VR with the former being much more of a passive experience and the latter offering up a lot more in terms of gameplay and content.  Both games offered realistic VR recreations of the real-life events they were focused on and while neither was mind blowing, the balance between education and experience, on top of being a part of key moments in those events, made for unique titles and wonderful uses of VR.  Shuttle Commander takes us back to space as we get to experience the original mission’s take-off and participate in some maintenance tasks on the telescope with a little education thrown in because that’s what these devs do. 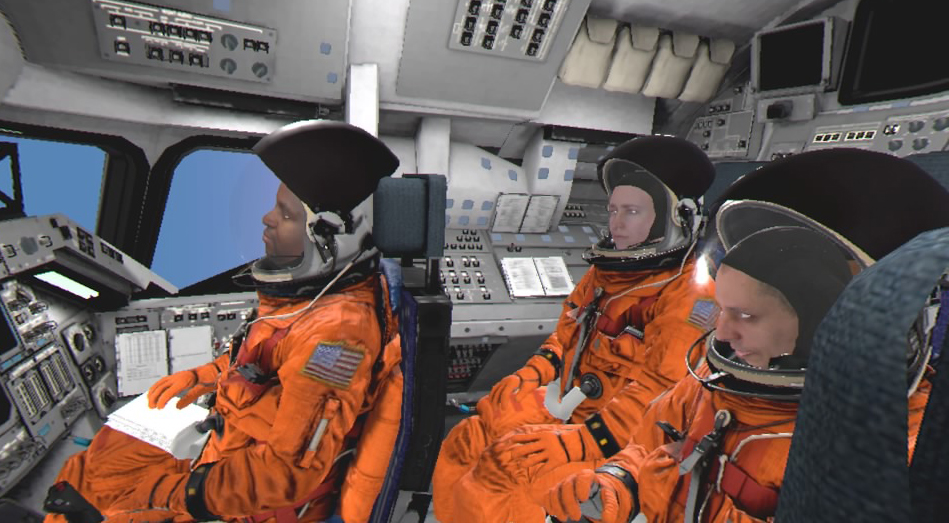 Right off the hop, only the DS4 is supported and in the introductory take-off mission, there is nothing to control or interact with, just sit back and look around at your team and take in the sights inside and outside the cockpit. As you head to space though sadly the DS4 doesn’t vibrate which feels like a missed opportunity for a little extra immersion.  Beyond that are a series of maintenance missions that take place both in and out of the shuttle.  The first mission has you controlling the Canada Arm as you manipulate items in space.  The next 3 missions have you in a space suit taking apart and replacing components on the Hubble telescope.  This is where problems start to pop up as every action you need to perform is assigned solely to the DS4 so even though you can look down and see your arms, they sit there lifelessly until you hit the right button to watch them act on their own accord.  Not necessarily a killer, but these missions are broken up into a series of steps, each with more then the last, and the physics in this mode make these missions unbearable.  Just grabbing an item with the triggers is a pain but then you need to rotate them so they line up with objectives but collision detection is set to the extreme and contact with anything will skew the piece in your hands or worse, cause it to drift out of your hands and if your not quick enough to grab it, which is a pain don’t forget, then that piece drifts off into the void causing you to fail the mission and start from the very 1st step which is brutal.  Finally, is the actual mechanic of drifting through space which feels incredibly stunted compared to the zero-g mechanics in games like Detached or Space Junkies.  Here you just use the thumbsticks to steer and move in traditional FPS with no real sense of weightlessness largely due to the lack of any drift.  The final mission tasks you with landing the shuttle utilizing the gyros in the DS4 which was a nice touch, though devolves into some pretty subtle steering as you stay within a flight path and pressing buttons on the D-pad to activate parts on the ship needed for landing.  Finally, there is a little education only mode which shows you 3D models of the universe, detailing information about the solar system which was a nice touch. 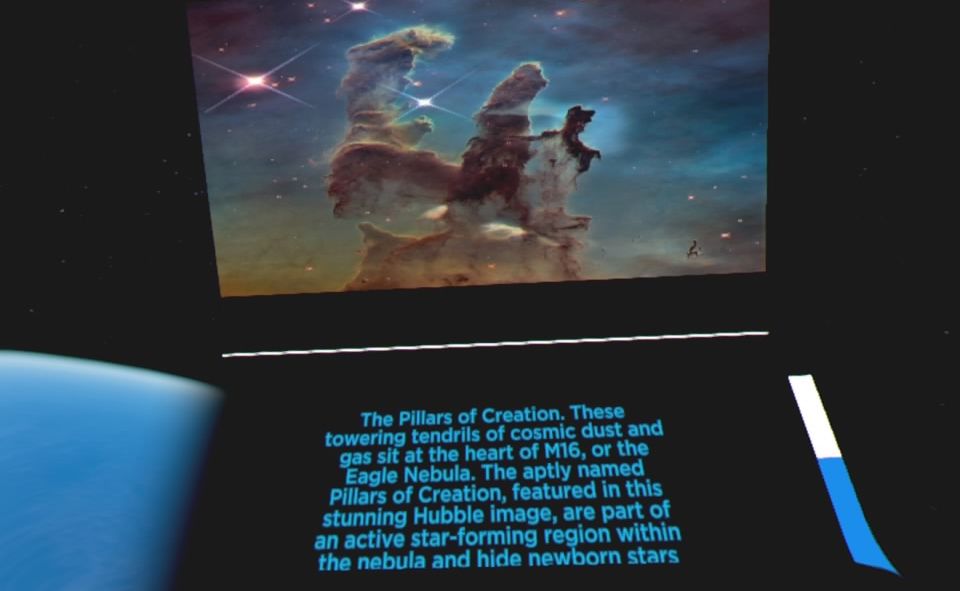 You’ll see a few different areas in the game and all of them suffer from different and noticeable levels of aliasing.  Inside the shuttle at launch was a highlight as you experience the events leading up to the launch and trip to space, with 3 other astronauts in the cockpit with you talking back and forth with themselves and NASA.  Watching the incredibly blue sky fade away to space was slick, though the complete lack of lighting effects and awkward blinking sun really hurt what should have been an amazing recreation in VR.  The rest of the space missions look fine with a decent amount of detail on the items you mess around with though I thought the Earth beneath you lacked the detail I would have expected considering just how beautiful it looked in Apollo 11.  The flight mission allows you switch cameras from inside the cockpit to outside it from multiple angles, but resolution and aliasing issues make any view outside the cockpit hard to look at.  The education bits were a visual highlight with the universe shrunk in size and surrounding you and included were some cool 3D pictures, but the others looked very low res in the headset and not that good.

Above anything else in here, I did appreciate the use of real audio recording from the actual missions placed in the game.  Regardless of the presentation, it’s very cool to be in the shoes of an astronaut in real-time just listening to the chatter and commotion during the take-off.  I’m not sure if that authentic audio is used in gameplay missions, but whether it is or isn’t the original audio, it sounds like it could be which helped in making me feel like I was in each situation.  Music pops up during the menu’s and educational stuff but as each mission does try to be as close to a simulation as possible, most of the game is reliant on that chatter and ambient sound effects which all sound just fine. 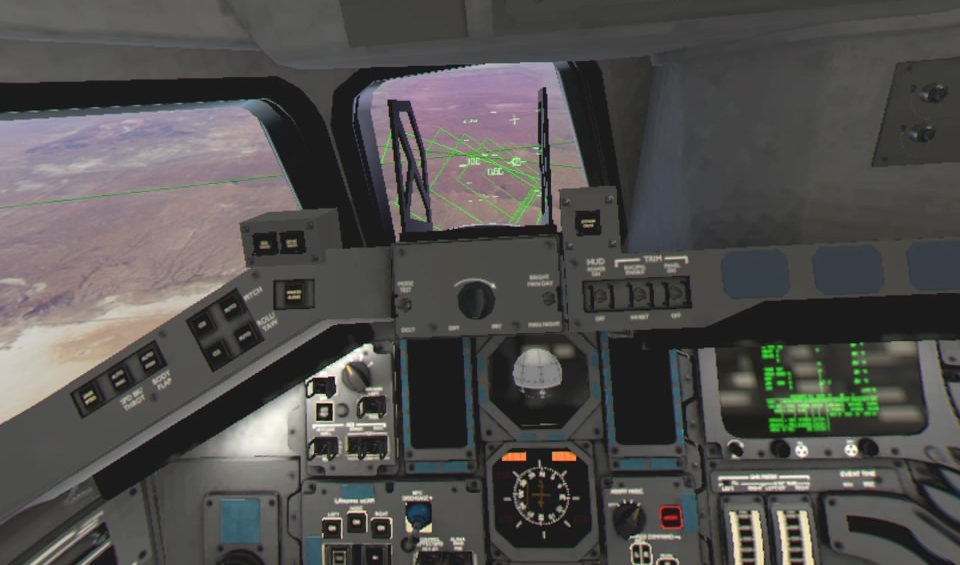 So, while I have many issues with this game, I kept coming back to the lack of Move support as being the largest one with that issue leeching into all my other issues.  Controlling the Canada Arm with the joysticks actually has the joysticks in the shuttle moving in tandem and I just wanted to grab them.  That is compounded during the repair missions where I stumbled and fumbled with manipulating everything and every time I looked down at my lifeless arms, I couldn’t help but feel like that was a huge oversight.  Even that final mission where you land the shuttle has a joystick between your legs which reacts with the thumb stick and I hearkened back to Ultra Wings VR where I could actually grab the joystick.  Add in the less then stellar visuals, poor mechanics and punishing failure system and this entire experience just left me wanting. 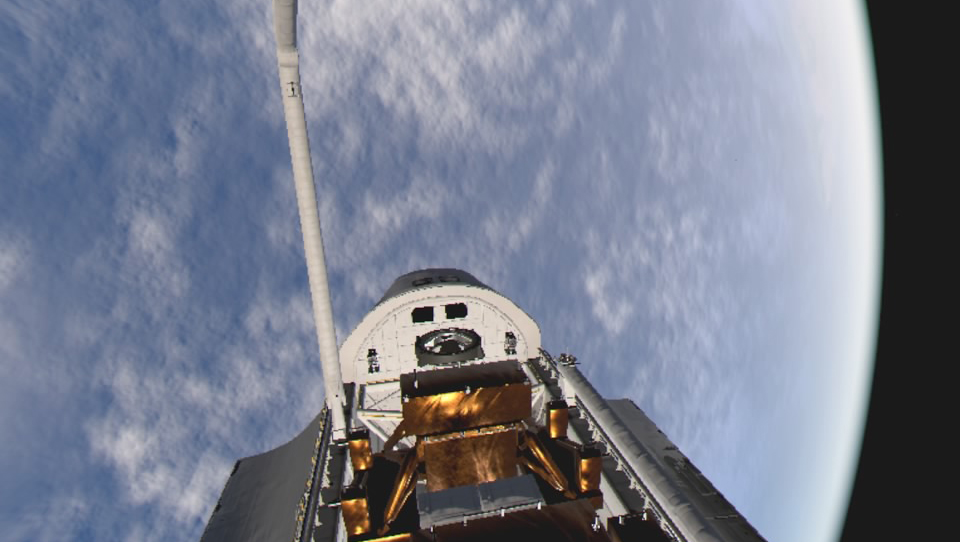 This should look more impressive then this.

I liked Immersive Educations 1st 2 VR efforts but they missed to many key factors in this one making it feel like more of a chore then anything else.  Hardcore fans of this kind of history might pull a little more out of this then myself, but for those with only a passing interest in this content, this is hard sell.  Perhaps, when this releases on the PC side of things, some of my issues could be addressed but as it stands at release, the few bits I found enjoyable are far outweighed by cumbersome controls and poor mechanics.

What would I pay?  This isn’t available in North America yet, but works out to be $25 which is high.  It’s cool to see all the components of the shuttle and if you have an interest in its histories then you’ll probably enjoy this more then I, but as it stands today, $10 is as high as I would go for this, and that’s assuming the subject matter is of interest to you.

Immersive Education provided The VR Grid with a press code for this title and, regardless of this review, we thank them for that!