Helpless, Alone and Afraid is also an equally apt title for this experience/game.  Utilizing FPS mechanics but stripping those mechanics bare leaves us with a 1st person VR experience unlike any other, yet feels like it is lacking in some ways.  Developed exclusively for the PS4 is this survival horror experience that have you on the edge of your seat and peering around every corner in trepidation. 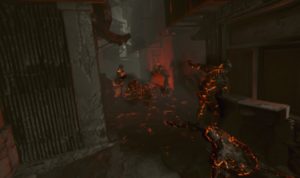 These streets are a MUTHA F***A!

You are introduced to (your love?) Dana at the onset of the story and are effectively tasked with trying to track her down throughout the game, kind of.  The devs clearly wanted mystery to permeate this game, which is awesome, except for the fact that you are never really sure what you are supposed to be doing.  Linearity is ultimately your saving grace as the game forces and guides you through the twisted realms around you.  Your only controls are walk, walk faster, pick stuff up or interact with objects (limited to doors and people mostly).  What all of that leaves you with is more of an interactive creep fest than a fully fleshed out game.  You have 2 control methods here as well with pie chart turning or free turning.  I used free turning, which was great except whenever you turn your field of view decreased significantly until you stopped turning, which I found off putting.  Also you walk really slow and I found myself running through the entirety of the game.

The look and feel of this game is a standout in most cases.  Levels are highly detailed and the use of colour (or lack thereof) lends itself wonderfully to the disparate world around you.  Everything is black or white with splashes of colour to make objects of interest stand out.  Cities are massive and seem endless no matter where you are looking and character models as well look fantastic…until you get close to them.  Close up everything in this game loses resolution, nothing game breaking but it seems odd, especially given the detail on yourself and the other major characters. Overall though I thought the visuals lent themselves well to the experience.

Claustrophobic subways, populated cities, abandoned villages and way more surreal environments all lend themselves well to the creepiness that permeates this entire the game.  Flashbacks to an earlier time, as well as the later levels, form the world around you make for some great moments in VR. I need to mention the flocks of birds that you see throughout your journey because in VR, they look terrible…like a really blotty Rorschach test.  If it wasn’t for the accompanying sound, I don’t think I could tell they were birds. Every time I saw them I shook my head at how bad they looked and it just didn’t make sense have these in VR in this state.

The audio as well stands out as being absolutely unnerving.  Headphones are a must and need to be cranked to drown out the outside world.  Every single sound had me stopping in my tracks and peering around the next corner scared for what I’d find.  The music as well and other background noises all do their job in making the world around you seem real and macabre.

As you venture through the different environments you find insane notes that help(?) you understand the nature of the world you live in as well as photos with accompanying audio featuring what sound like youthful people telling you their thoughts on life.  Along with your search for Dana, as well as the giant burning man who chases you down in the latter levels and phone calls from your buddy, the narrative takes you through a story that takes some weird turns to a pretty nuts conclusion.  There are also a few morale choices that you have to make that will affect the games outcome somewhat.

There are also some stealth mechanics here, but once you figure out enemy patterns, they really aren’t too difficult.  A flashlight is also your best friend and you pick up tonnes of batteries for it along the way.  I was so paranoid about using it that I did so sparingly and it really doesn’t do anything besides light up dark areas and show you more of this decrepit world.  By the mid-point of the game jump scares are replaced with an overwhelming sense of dread and confusion. 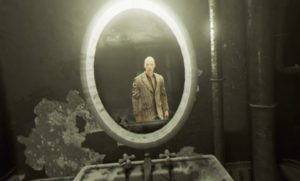 Here’s lookin’ at you kid.

The lack of interaction with our surroundings does hinder this experience.  It’s obviously very intentional and does create a sense of helplessness and dread.   Though it feels odd to be given a weapon by another character only to use it once and be forced to drop it when the next section has you navigating streets full of armed, crazed enemies.  Depending upon how deep you look at the narrative and specifically the final moments, you may be able to justify this as part of the story, but it just felt odd at times.  Enemy AI as well can be a little unpredictable with stealth missions seeming super simple while people in the city spotting you and beating you down with ease.  Running away from problems is always the best choice in this game, regardless of the situation.

At the end of the day I had a lot of fun with Here They Lie.  The intensity and sense of dread kept me on my toes.  The level designs had me engrossed in the world and the need for answers kept me going forward.  If you are into scares, the darker side of humanity and existential story telling than this is definitely the game for you.  However, if you are looking for more traditional game mechanics you may feel slightly wanting given what’s available in this title.

What would I pay?   $20US is an apt price.  The game can be completed in roughly 4 hours and it really does pull you into the world presented.  I wanted to find out what exactly my purpose was and though the final reveal is a little confusing, I think I figured it out and was pleasantly satisfied with the overall experience.