Concrete Genie is a blending of a few different gaming genres centered around a young Boy named Ash and his artistic creations, which are brought to life thanks to a magical paintbrush bestowed upon him by a genie named Luna.  Ash lives in the small town of Denska which has come upon hard times and is reflected in not just it’s run down state, but by the populace as well as many have left the town and those that have remained are disheartened and troubled.  It’s up to you as Ash to bring light and life back to this seaside town while trying to avoid the bullies out to stop your efforts. 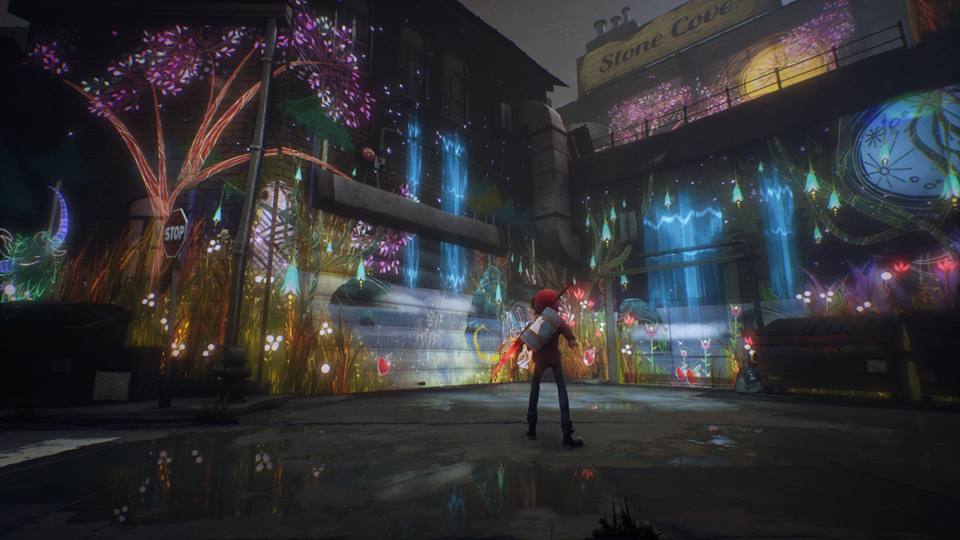 Take the time and you can make some very cool street art!

The non-VR campaign plays very much like a stripped-down version of Uncharted as you’ll be running around and climbing buildings in the city or using wire lines to zip across streets and alleyways.  The major mechanic that separates this title from other is the act of painting, which is what the VR side of this game is all about.  Playing flat, with a DS4, Ash must paint walls with his magical brush which turns on the lights hanging nearby.  Turn on enough lights and you can summon a genie which will interact with Ash in fun ways but more importantly can help Ash bypass obstacles blocking his path.  What is interesting is that the painting is handled by the gyro’s in the DS4 so you need to physically steer a reticle across the wall you wish to decorate, whereupon you create your masterpiece.  It’s an interesting mechanic as it seems tailor-made for VR and for those that are artistically challenged, you don’t actually paint, but rather choose from a selection of simple drawings (trees, grass, stars and many others) to create those images.  Genies are also created in this same fashion with more artistic options scattered around the game thanks to the bullies who tore up your sketchbook and as you find each page throughout the game, new options become available. 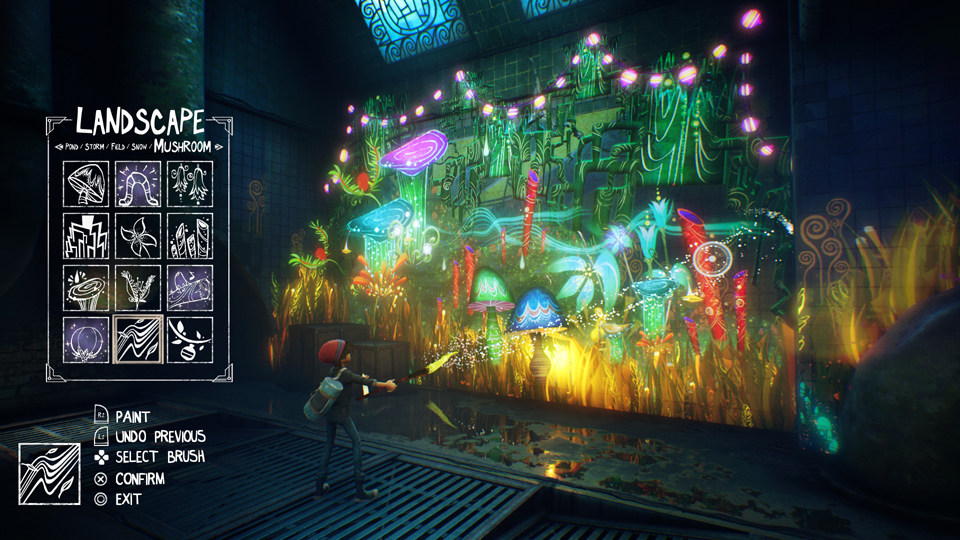 The VR content contains 2 different game modes, the first of which ‘Experience mode’ which has you interacting with a small genie named Splotch, who teaches you how to paint in VR.  You need 2 Move controllers to let Splotch guide you through his mini painting campaign.  This section uses identical mechanics from the main game only now instead of floating menus, all your artistic options are in a book in your left hand adding a nice extra level of immersion.  In Experience mode, the painting is performed on a 3D canvas and you paint the world around Splotch as it asks you to create meadows, trees, rainbows and a bunch of other stuff to make it happy.  Completing Experience mode, which will take a half hour or so, unlocks ‘Free Paint Mode’ which is more of an extension of the main game as you’ll have access to a few locations from Denska where you  can paint to your hearts content but unlike Experience mode, in this you’ll be painting on walls around you just like in the campaign and can create genies to interact with your paintings with the main caveat being that you only have access to the items you have unlocked in the campaign so if you want to maximize your VR experience, you need to play out of VR to do so.  You can also revisit Splotch though unlocks from the main game don’t apply here making this section much more limited, though Splotch is fun to watch as it interacts with the all the stuff you create. 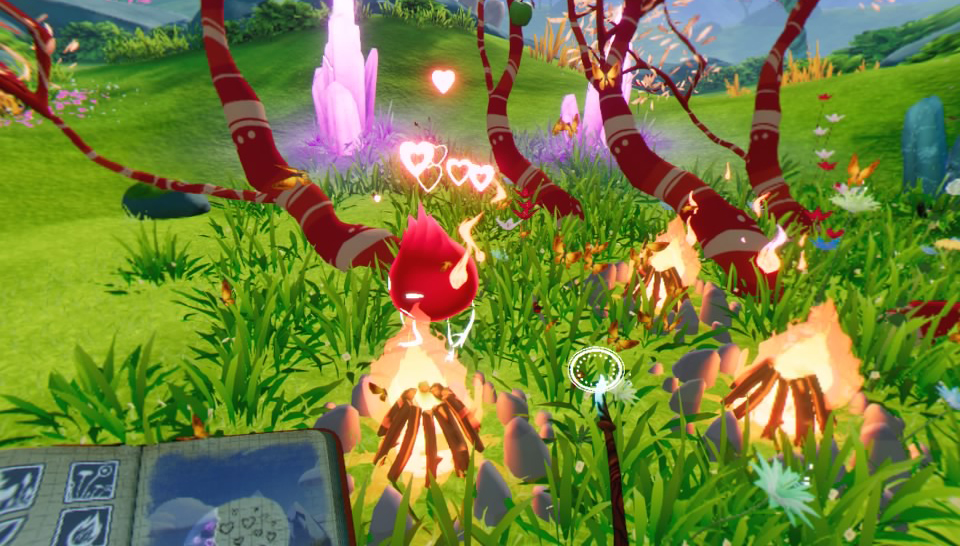 Visually, flat or in VR, the game is stunning at times and uses a cartoonish art-style that compliments the gameplay.  The world around you is dark, drab, rundown and not very visually appealing but when you apply a little artistic magic everything becomes bright, colorful and inviting.  Your paintings are always vibrant and alive which really makes them pop against the concrete, brick and wood backgrounds you’ll be painting on.  Dependent upon what you paint, there are many animations from just the creation side alone to other more subtle ones like the flickering of a fire, wind blown grass and many others which makes these painting feel alive.  The genies are also wonderfully animated and they lumber through your canvas, occasionally asking for specific items to make them happy, and when that happens you get ‘super paint’ which, in the campaign, is used to remove dark mold hindering a genies path and in Experience mode is used to accentuate your art with bright blasts of neon infused goodness.  The city itself looks great as well and even though you only visit 4 locations in VR, they all look great and the attention to detail is high. 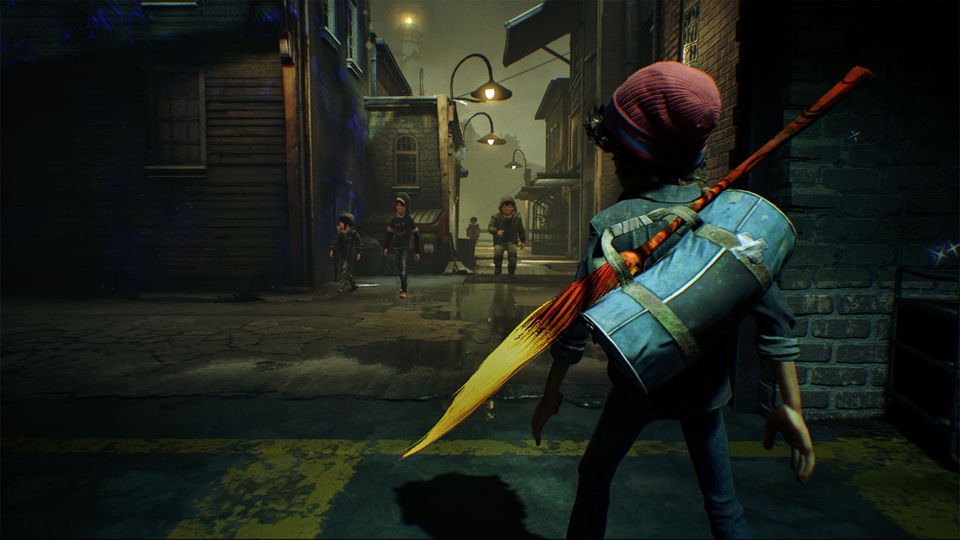 Watch out for this group, they like to trouble

Typical for this type character driven journey, the music is emotional and timely, often falling into the background but accentuating whatever is going on whether it’s just platforming or when a dramatic scene unfolds.  The genies will make some funny, friendly guttural noises indicating when they are happy or want your attention.  It’s worth noting that all the characters in the campaign are fully voiced, though none of that content carries over to the VR side save for the genies.

I enjoyed Concrete Genie and the inclusion of DS4 motion mechanics as well as the VR portions had me really wishing this was a game I could play fully in VR though I found the DS4 painting to be incredibly awkward when compared to Move controls.  The VR painting just felt so much more natural, to a point where I hope this game may get some kind of additional VR content down the road or better yet, a full-on VR version that lets me enjoy all the campaign stuff in my headset.  I even tried playing this in cinematic mode in the headset just to pull a little extra immersion out of this game and I think given the art style used, porting this to PSVR isn’t a completely outlandish idea.  That fanciful idea aside, Concrete Genie is beautiful game surrounding troubled children and just how they react to the stresses around them.  It makes a few points that struck me as a parent and gave me a feeling akin to how I felt after playing a similar title, Ghost Giant.  It doesn’t preach its messages too loudly, which I’m grateful for, but let’s you stew on small tidbits of revealed information as you continue to make the world around Ash a better one which I think for the most part works.  The platforming did feel a bit clunky but is by no means broken and a few other mechanics like luring bullies away from objectives and finding collectibles scattered around every stage made for an engaging non-VR experience. 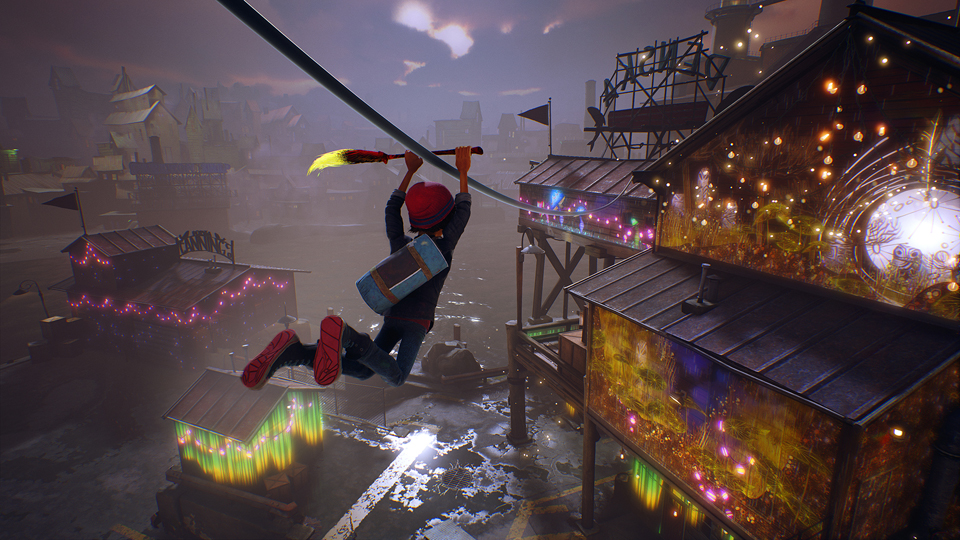 This is the 2nd fastest way to get around the city.

As for the VR side of things, I think what is here is a great compliment to the game, but as a standalone feature, it’s rather shallow.  You can create some very beautiful works of art, but as you are using predetermined images, it is not a standard painting tool and too get full value out of the VR portion, you have to play through the campaign.  As such, I think the VR portion is a little too limiting to warrant a purchase on its content alone, which obviously was never the developer’s intention in the 1st place.  That said, if you are into a light puzzle-platformer with an emotional edge, Concrete Genie delivers where it needs to, and the VR content is a nice bonus and hopefully a sign of more to come.

What would I pay?  Concrete Genie is easily worth the $30 asking price.  The game did get a little repetitive during longer plays, but the story carried me through those sections, and I was pleasantly surprised by how much I enjoyed this, including the VR content.  If you only care about the VR side of things, definitely hold off until this is on a big sale AND you are willing to play through the main game to get the most out of the VR experience.

Sony Interactive Entertainment Canada provided The VR Grid with a press code for this title and, regardless of this review, we thank them for that!