Well, VR has done it again and gone and blown my mind with something so fresh and awesome that I’m (almost) at a loss for words.  I think many of us at some point in our lives have dreamt about being a hero, flying into a dangerous situation and saving the day.  I’m sure a lot of you have played superhero games in the past with, notable standouts like Spiderman and Batman, immersing us into their respective universes and making us feel all powerful.  Well I’m here to tell you that if you felt like Batman in the Arkham games, then prepare to have your mind blown because you are going to feel like Superman in Megaton Rainfall, and than you are going to feel even more super than that. 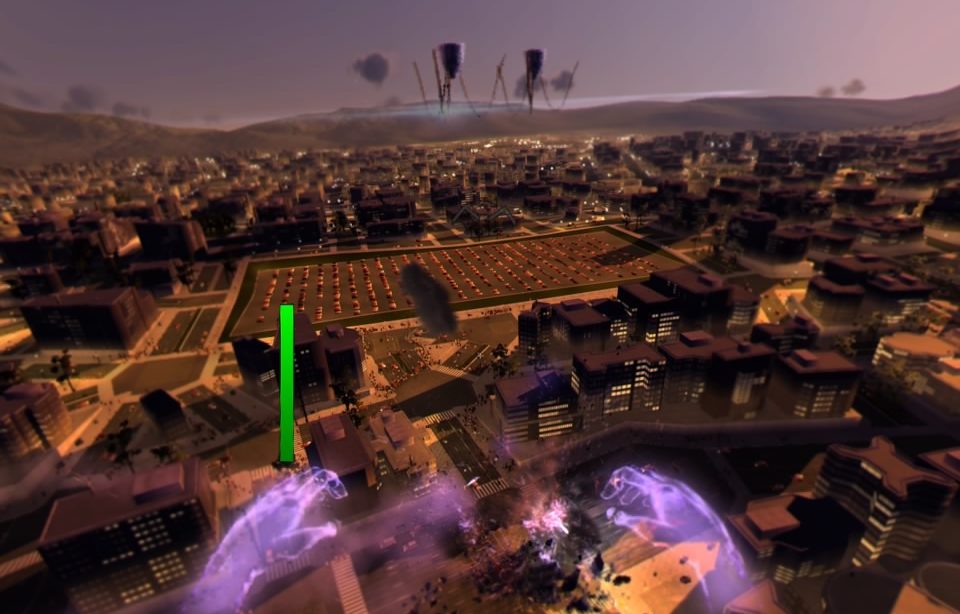 When the aliens show up, you have mere moments before that start in their destructive path.

You have been created for one purpose; save humanity. The games introduction has your creator/father (a giant cube) explaining that you are the only barrier of defense against the encroaching alien invaders bent of causing the annihilation of the human race.  From here you travel through space until you reach earth and that’s when the trouble begins.  The only control option is dual shock which, given the limitations of the move controllers, just makes sense.  This controls like a traditional flight shooter, only as the game progresses you unlock more and more abilities that change up the gameplay in awesome ways.  Something that should be mentioned (and praised) is the wide variety of comfort options available.  Click or smooth turning, blinders and flight controls all feature options to minimize sim sickness or more importantly, maximize immersion.  Aiming is done by looking at what you want to shoot and then shooting, simple to say, not simple to do.

The action takes place over and in large cityscapes and it looks awesome.  The close-up visuals may not be the best you have ever seen, but the seamless transition between orbiting the planet than diving into a city is an effect that I am still in awe of.  The cities carry a lot of detail with sky scrapers and suburbs, maybe an arena or park and make the world seem like it is our own.  Like I said, if you want to tear this game down for the close up visuals being somewhat lacking, you can, but the massive scale destruction presented along with huge variety of enemies makes this an easy point to ignore.  You can see your hands before you and can shoot a variety powerful blasts from them with dramatic effect.  Flying across the terrain at unfathomable speeds elicits a a great sense of wonder and even encountering a real world landmark( Sphinx statue or the city of Dubai) just make this feel like this is your earth and you need to save it. 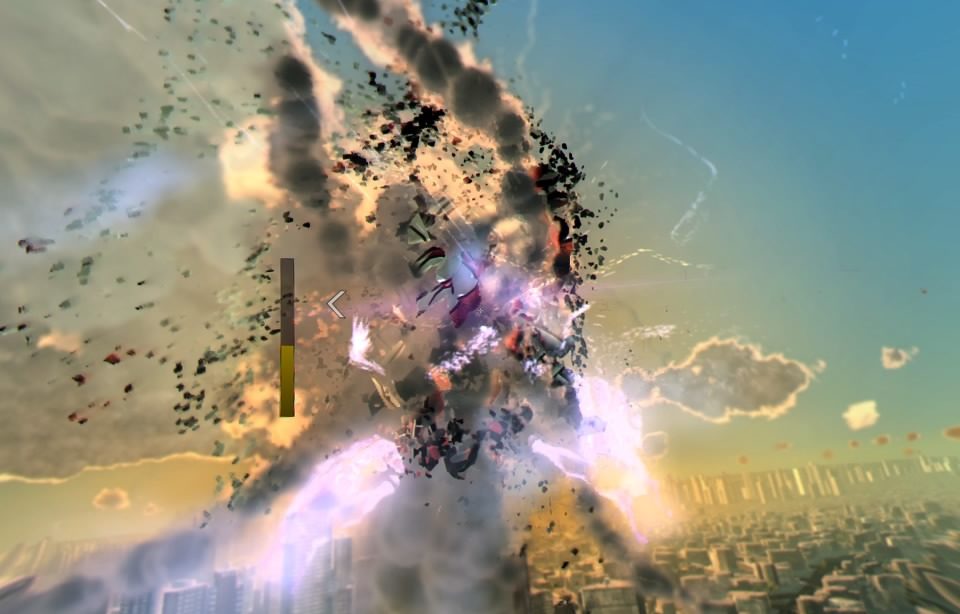 The destruction effects are stunning at times!

The audio also deserves a shout for its high production value.  Your “father” speaks in unemotional, god-like tones and the aliens all sound as destructive as they actually are.  A collapsing building is a tumult of crushing and smashing sounds while lasers and bombs all exude auditory bliss.  The screams from the citizens below are fair warning that you need to step up your game or risk letting the human race down.

The opening moments involve a lot of flight but once the action gets started, it gets insane.  3 legged robots right out of ‘War of the Worlds’ begin their laser filled assault on the populace and shooting their vulnerable red dot is the only way to stop them.  It’s a ridiculous gaming trope; shoot the glowing red spot, but it works perfectly in here.  As the stages progress, new enemies are introduced and while each has their own weakness, figuring that out is its own task.  Stages only get harder, being peppered with a larger variety of enemies and although you all powerful, the pace at which the aliens destroy the city will have you constantly racing just to keep up with their onslaught. Unlockable powers may be the only solution to destroying the next alien ship you see.  Some lift city blocks worth of debris and slam it back down into earth, while others turn into buildings, camouflaging themselves as they smash the puny humans.  Giant worms tear through downtown or a ship dragging a giant ball through the city streets may need disposing of.  The amount of enemy’s present is staggering and while they are introduced at a very fair pace, each enemies’ addition to the mix just makes saving the city more hectic, challenging and fun. 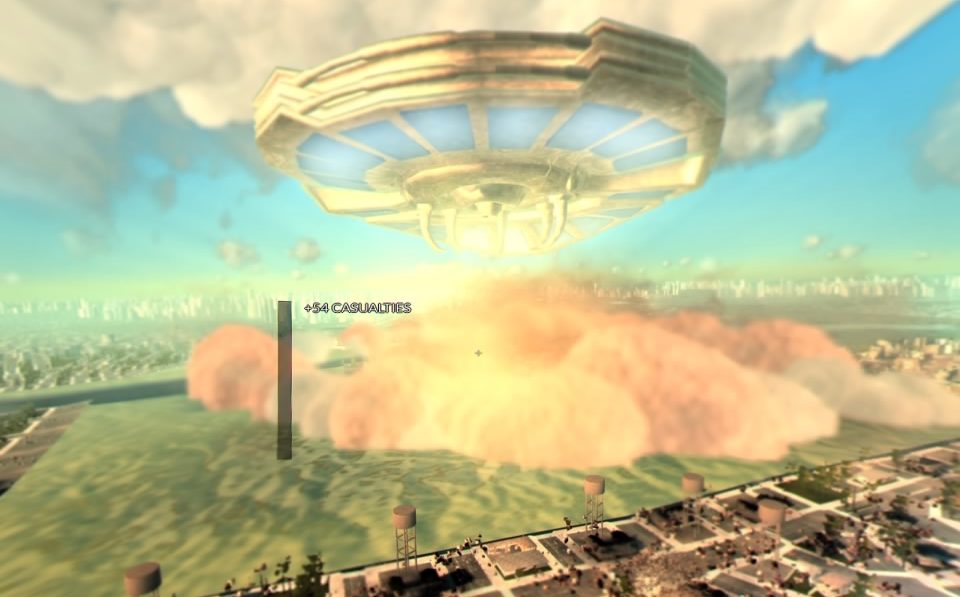 The bigger they are, the more damage they can take.

The campaign plays out the same between most of the stages, defeat the next group on invaders, receive a new power and travel across the world to the next threat.  The main game can be beaten in 2 hours (based on an attainable achievement) though it took me around 5 hours to do so, though I did spend a lot of time just flying around.  You will fail in the campaign, and for the most part, that’s not a bad thing.  You can’t die in Megaton Rainfall and your health is actually based on human casualties (a very similar mechanic was used in the Superman Returns video game) so not only must you stop the aliens from massacring the people below, you have to be careful not cause the destruction yourself.  Every missed shot only adds to the carnage so timing your shots and learning how each enemy works is pivotal to your success.  The 2nd power you unlock is the gigaton blast and the first thing I did was shoot that blast at an alien ship…that promptly moved out of the way.  I failed that mission as my blast impacted with the ground below, ripping the ground asunder and killing a large portion of the populace with a huge (and impressive), earth-shattering explosion.  Note to self and you; don’t shoot at the ground.

Beside all that earth saving, you can also navigate the galaxy and while there isn’t a lot to do here there are still some very cool visual moments, bonus objectives and an Easter egg or 2 to check out.  Given just how large space is, I would have liked a map for this area just because it’s so easily to get lost, but the space stuff is more filler than anything else and I still enjoyed checking out other planets and finding a few, interesting story expanding elements.  The only other mode is score attack where you simply play the game to get the highest score as wave after wave assaults the earth, unlocked after you beat the main campaign.  Besides score attack mode, each level also has global leaderboards so you can compete with your friends to see who is actually the most heroic.  Megaton Rainfall is “semi-procedurally generated’ so don’t expect to see a ton of crazy details as many visual elements are recycled and reused to fill in the vast play area.  With that said, what Pentadimensional Games created is an amazing world/universe that not only exceeded my expectations, but still continues to amaze over an over again with it’s scope, scale and fun.

This title is by no means perfect, but I’m finding it really hard to point out the faults in the game given that it is not only a budget title, but that it’s some of the most fun I have had in my entire gaming life.  I mean, you could whine that the cities all look the same, that close-up inspection of any environmental element will yield less than stellar results or that the music repeats itself, but every issue I could have with Megaton is rendered moot by 1 simple thing; the gameplay is absolutely enthralling. 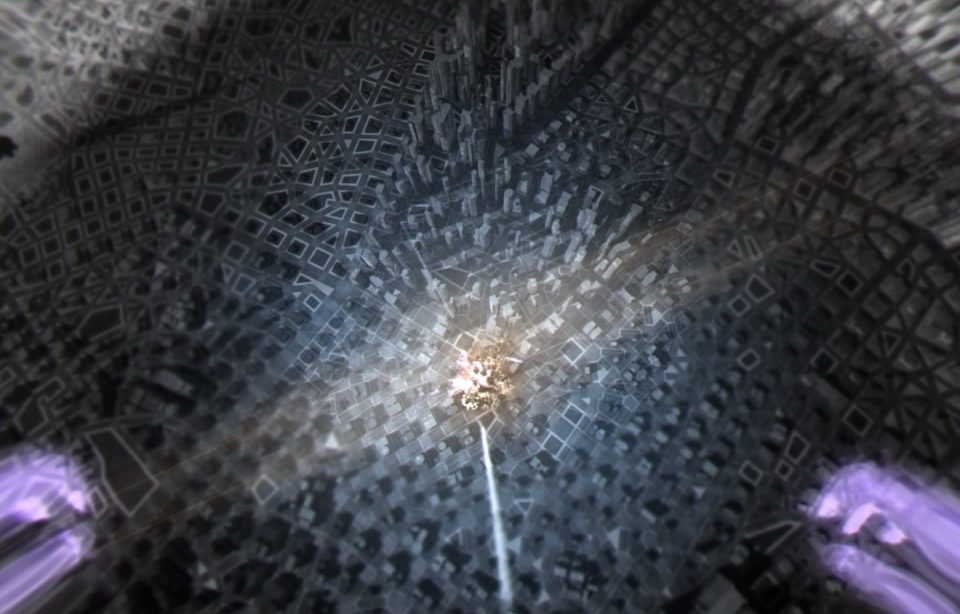 The seemless scale is an absolute joy to behold

This is wish fulfillment here and I can’t stress how much I love this game. While games like SUPERHOT and Raw Data make you feel like bad ass in a virtual world, this made feel more powerful than any game I have played.  It’s been a little bit since my last “OH MY GAWD!” moment in VR and I think Megaton Rainfall had several of them. This is far and away some of the most fun you can have in a headset and I’m so happy I’m a VR owner right now!

What would I pay? The asking price of less than $20 is probably some of the best value you can get for VR.  If it was $30 I would still be really happy.  Buy this now is the point I’m making here!

Pentadimensional Games provided theVRgrid with a review code for this game and not only do I thank them for that, but I thank them for making one of the best VR experiences I have every played!