The VR rhythm genre is a plentiful one and for every Beat Saber or Audica is 10 more less inspired games that fail to the move the entertainment needle in any significant way.  That’s not to say their all bad as plenty of them offer different mechanics and unique soundtracks to attract new players. Dance Collider is an older title (by VR standards) that takes place in a dystopian future ruled by an AI called Uriel and through the power of dance you can fight back against oppressors and help wage a revolution…just like in Footloose! 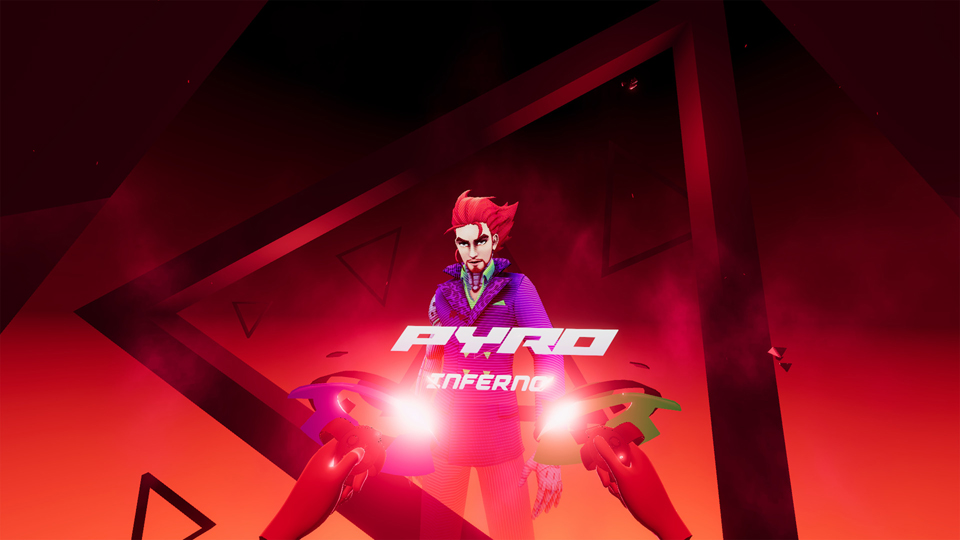 One of the staples of this genre is hitting incoming objects to a beat, often just requiring you to line up your hands with the matching color of whatever is coming at you which is the core of Dance Colliders gameplay.  However, that will only get you the minimum amount of point with multipliers being added to your score by punching the incoming beats.  Furthermore, those beats come up you from high and low and from either side making for a game that, on the surface seems rather stock, but gets frenetic and physical, especially on the more challenging difficulties.  There are 45 tracks in total, divided amongst 9 of the worlds best dancers, each with their own style and completing any of the songs from any of the dancers will allow you to enjoy the limited story presented and face off against Uriel.  Each song has 4 levels of difficulty to choose from and as a guy who’s not the best at rhythm games, I found the most fun on the 2 harder difficulties as they were still very do-able (minus one of the dancers tracks) and provided that extra level of physicality that I think I crave when it comes to these types of games.  Additionally, there is a custom track creator available on the PC side of things that lets you very easily upload any mp3 file into the game.  From here you play the song live and add in the hit boxes as you see fit making for a very natural and easy way to quickly add your own music stylings to the game and if your so inclined, you can even record yourself dancing and upload that as well which will be displayed in the song just like the NPC dancers. 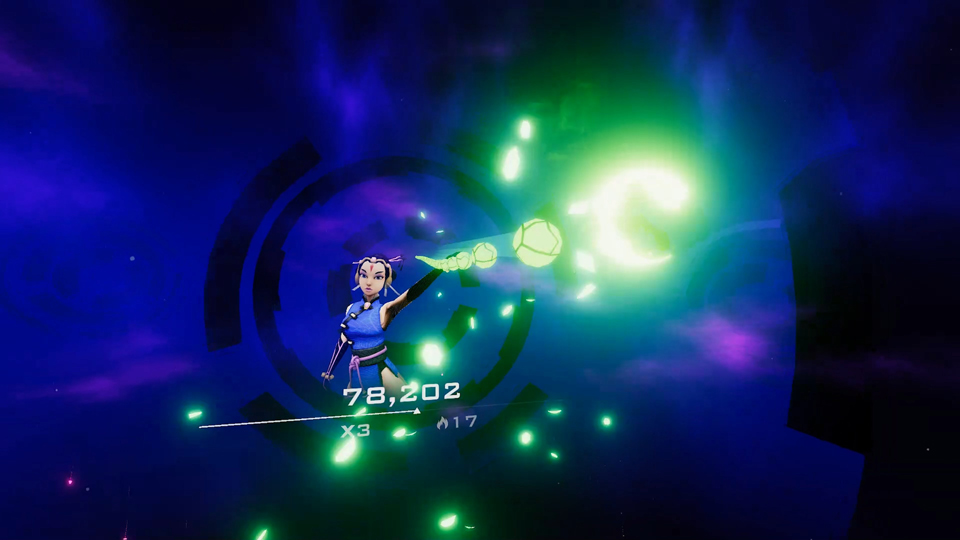 Each character has their unique flare and setting

The overall aesthetic in here is upbeat and funky.  While the future may sound rather bleak, the Dance Collider scene is anything but with the dancers dressed in variety of flashy costumes.  Each dancer has a brief description that highlights their personality and dance style.  Many of the dancers have robot parts and are on display in front of you as you play, looking like giant holograms dancing to their own songs.   They animate nicely and each also comes with their own, typically flashy background which usually contains some light animation though the focus is clearly on the beats coming your way.    Finishing each stage will bring up a quick little description of the events happening in the real world with a quick cinematic to further hammer home those happenings.   The art style here is cartoonish and full of bight flashy neon colors and is fairly engaging and I challenge anyone to not get lost in the all the visual flare as you try and hit all those incoming notes.

Some light voice-over work is present with the opening exposition breaking down the world events and each character having a few one-liners the insult your efforts if your blowing it and praise your skills if your crushing it.  Playing back to back songs from a single dancer will have you hearing the same quips quite often though they aren’t’ too intrusive in the grand scheme of things.  The star of any rhythm game is the soundtrack and Dance Collider is no slouch in this department with 45 songs to choose from artist F-777.  All the songs are a mix of dance, electronic & dubstep and while none really standout from each thanks in large part to the lack of vocals, I enjoyed almost every song in here as they are upbeat and cover a fairly wide range of sub-genres which are attributed to each dancer. 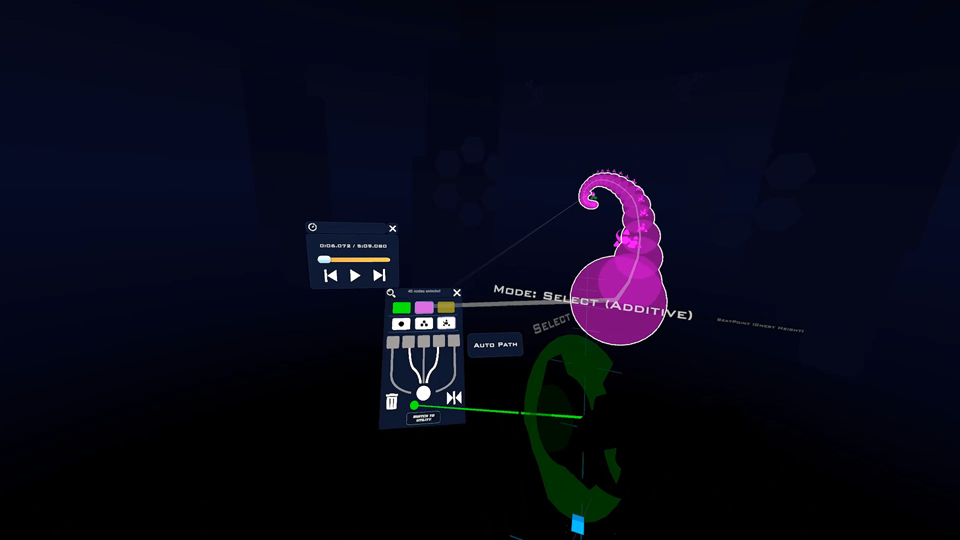 The custom track creator might be the easiest one I’ve ever used in any rhythm game.

Dance Collider surprised me with just how much I enjoyed it.  On the surface it would seem to be just another VR rhythm game but the number of tracks and just how upbeat they are along with the physicality on the harder difficulties just has me hooked.  The story is appreciated but ultimately irrelevant save for when you face Uriel as it is unlike any other dancer in the game and would need a little explanation.  Of course there are online leaderboards present so you can always try to best your previous efforts and while the track list is impressive, the custom track option on the PC really gives this game some significant legs as it’s just so dang easy to import you own selections.  It’s worth noting that the developers are hopeful to get the custom track creator on PSVR, but at launch it won’t be available.  The individual dancers do get a little repetitive but seeing as how you can jump to any track at anytime you’d like, it’s easier to skirt that feeling especially considering that each has differing styles of music and dance.  I did have some issues with notes being hidden behind other notes causing a few missed connections though it’s fairly easy to course correct and for those score chasers, it won’t take too much effort to memorize those trickier moments. 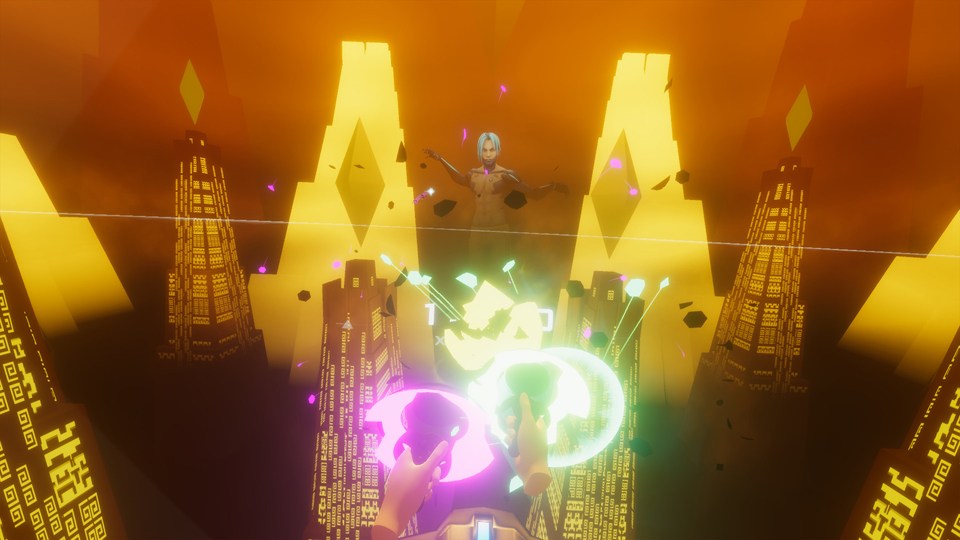 This dude is freaking tough!

I like Dance Collider, largely due to its upbeat soundtrack, physicality, and flashy presentation.  I’m not sure how much actual dancing you’ll be doing as I was definitely focused more on hitting the beats then anything else.  The dancer in the background doesn’t match the note mapping so you’ll be hard pressed to learn any new moves but I honestly could care less about that.  What I got out of this is a new, fun way to sweat in VR to a wide array of electronic beats…which is awesome!  The custom track builder is the icing on the cake for this one though even without its presence on the PSVR headset, fans of VR rhythm games should definitely give this a try!

What would I pay?  The regular price on this is $15 US which is great, even if you only have the PlayStation VR.  It’s fun, physical & challenging with most of the tracks being catchy and upbeat making for an overall positive experience!