Bow to Blood is a very interesting game that borrows aspects from many other games and merges them into something new in VR.  Take one-part Bridge Crew, one part Assassins Creed Black Flag, throw in some FTL just for fun and then place it all in a futuristic game show with some light social elements and you get Bow to Blood.  As the Freelancer, you are in control of space faring pirate ship and with your small crew you must compete in deadly competitions to destroy or collect specific targets all while navigating through treacherous maps, making friends or enemies along the way that could determine whether you stay in game. 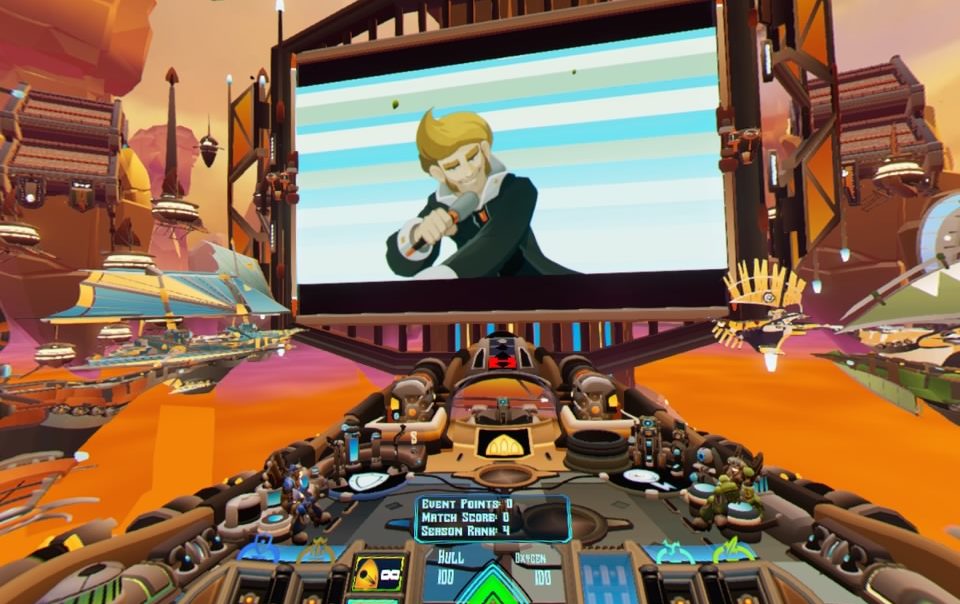 You can use either 2 Moves or the DS4, but I much preferred the DS4 options just because the buttons and commands were a little more spread out.  Either way your ship is controlled through button presses and the thumb sticks.  Besides driving the ship, you need to aim with your controller to shoot down enemies and objects.  You have a couple crew members that you can move around your ship to different stations making those systems active and in front you is an essence(power) console where you can transfer essence to offensive or defensive stations, very similar to the Engineering Station in Star Trek Bridge Crew.  Oh, and drones can attack your ship forcing you draw your pistol and take them out, like a first-person wave shooter.  The only advantage I noticed with the Moves was the pistol sections and while I began to get familiar with the DS4 controls after maybe 20 minutes, after more then an hour with Moves, I was still struggling to remember which buttons did what!  With either control method though the controls are intuitive and depending upon how you progress through the campaign more ship option may become available adding to just how much you have to micro-mange while still taking out the baddies and collecting items. 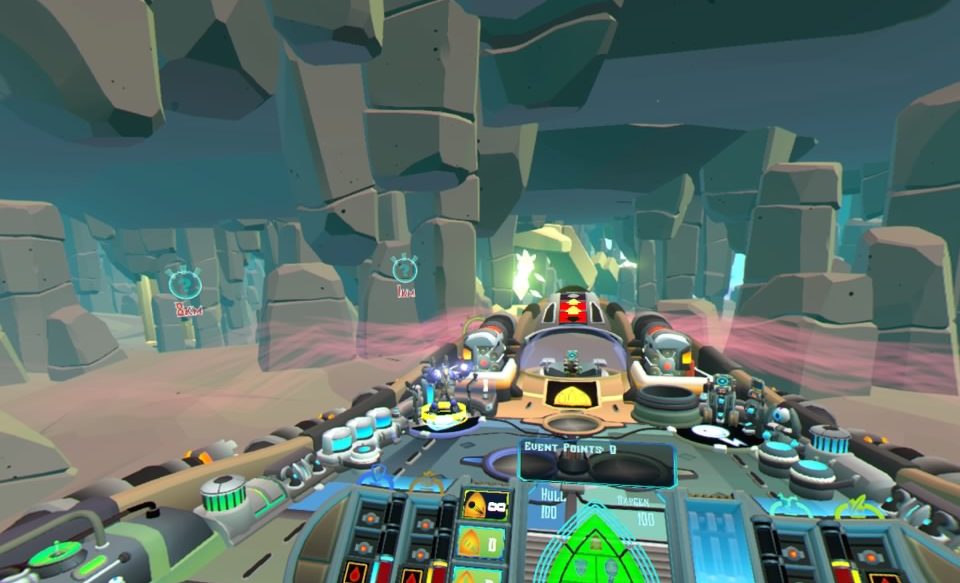 Some of the levels are absolutely stunning

Bow to Blood, in my opinion looks great!  There is definitely some aliasing issues and some washing out of distant objects, but considering the scope and scale of not just the levels, but just your ship, I forgive these minor shortcomings.  As the Captain, you are stationed at the helm with a full view of ship deck with its various stations and the 2 crew members.  Each stage greets you with a giant screen with the tournament host explaining the rules and breaking down the next match up.  This visual is by far the most lacking in the game as the host is just a couple images cycled and repeated for some incredibly basic animation.  I don’t even need a full motion video here, but a few more frames would go a long way.  Besides that one glaring issue, the rest of the game takes a minimalistic approach to color and detail, but opts for a bright contrasting color palette allowing for some impressive scale, very akin to what we have seen in games like Rangi or To the Top.  Whether it being sailing beside another ship, flying below the fog line, fighting a GIANT laser or being in an intense race, there is a lot to take in and the way levels mix up through a singular play keeps Bow to Blood feeling very fresh! 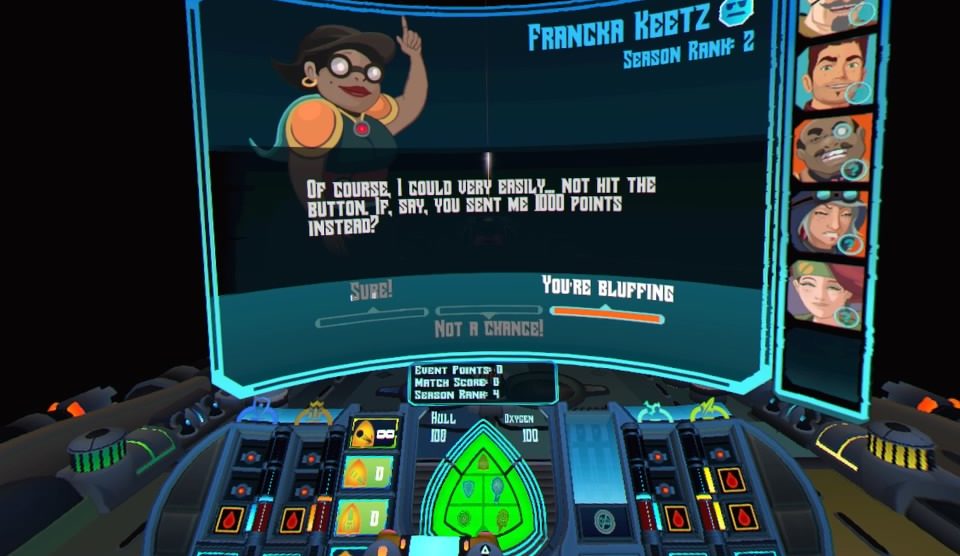 The choices are simple, but can greatly affect your game!

Sound is a little dicier, if only because the audio has a few more highs and lows.  Your 2-man crew is great, spouting one-liners and advice as the action unfolds.  Your crew members have a tonne of character and it only took minutes before I was totally hooked by their individual mannerisms.  The commentator is fully voiced at the beginning of the game and sporadically throughout the actual campaign while the other captain you face only talk to you by text, meaning you’ll have to read a bit of text as you interact with these potential allies or enemies.  If there wasn’t so much fully voiced characters in here, this issue would be much less noticeable, but as it stands the jump between speech and text always threw me off a little.

The actual game is divided up into a tournament with each level of the tournament taking place over 2 scenarios.  Damage from the first scenario carries over to the next, but if you survive those paired mission, you effectively pass that stage in the tournament, allowing for a little respite and repairs.  Points accrued during those stages are added to your cumulative total with the 2 lowest scoring players possibly being kicked out via a majority vote.  It’s that main aspect which makes the social game a little more important.  Throughout each stage you may be faced with a choice or 2 to help or hinder a fellow ship.  Decisions could reap quick rewards like extra points or weapons or the exact opposite with you becoming a target for those whom you may have wronged.  This can lead to sabotage, betrayal or worse, losing the vote should you be a little low in points.  While this is basically broken down into yes or no answers, it is still a great dynamic that adds a lot of depth to the game. 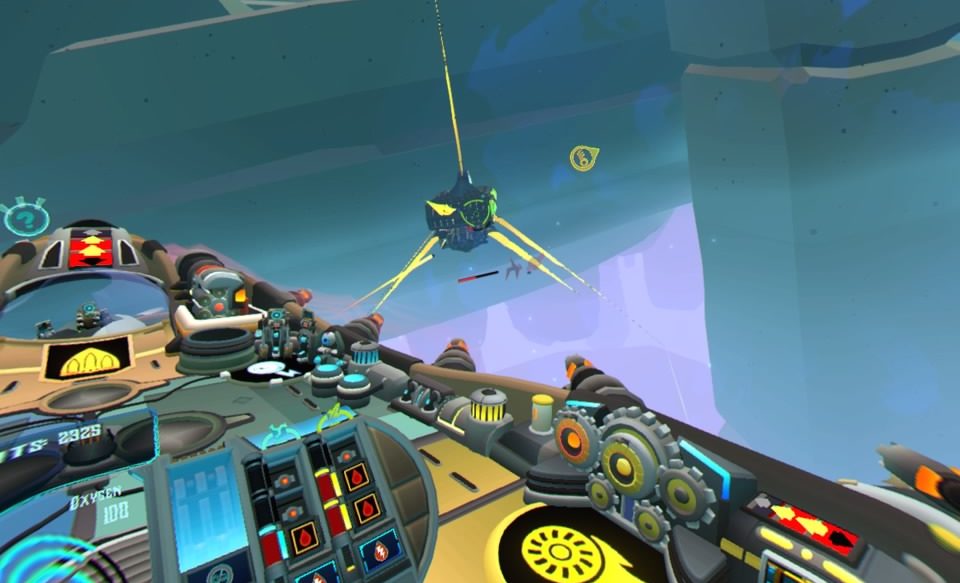 Nothing better then hitting them from behind.

I have pretty much whined about most of my issues already and every issue I mentioned above is very minor and easily ignored given the whole package.  This is a single player experience only, and while you can, at select points, choose your next level,  multiple play throughs will begin to repeat themselves, but they never feel repetitious.  The social dynamic at play makes these repeat viewings feel fresh and each time you start a new game, if you make it to the end should take you between 3 and 5 hours.  For that reason alone, I can’t recommend this enough.  Even though you may be playing through the same scenarios (you will new ones as well) the social dynamic and longevity of each game makes this an incredible value with high replayability.

What I haven’t touched on yet is the companion app (currently available for PC or google devices) that allows spectators to affect your game.  Those watching can log in and vote on a variety of options to affect the game by sending the player items to help or hinder them, though it’s up to the player whether he seeks them out without knowing if they are good or bad.  This is a solid addition for local play while friends watch, or if you decide to stream and include the game code but outside of those 2 methods of play, it is unusable making it more of an afterthought then a selling point.  Still, I’d rather have this option then not and it is just as much fun to mess with someone’s game as it is to be messed with. 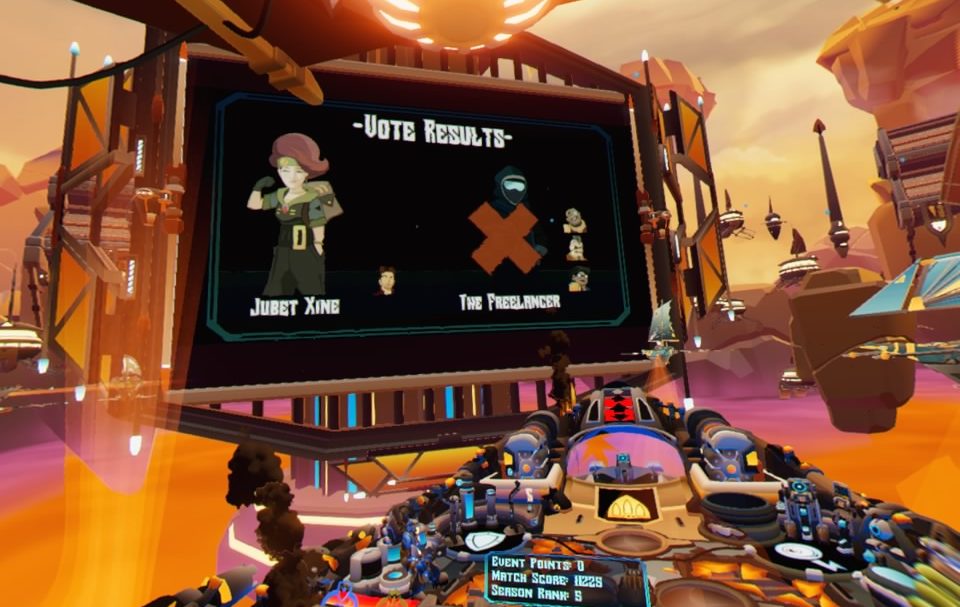 On your first play, I’d say you are guaranteed to see this screen.

Bow to Blood impressed me in almost every way.   A single tournament takes a long while and never gets dull.  You’re AI shipmates rarely annoy and often give very helpful advice and amusing quips that entertained throughout multiple plays.  The controls are satisfying as it feels like you are flying a giant ship and the combat and exploration is exhilarating.  Bow to Blood is an amazing single player experience that should not be overlooked and is one my new favorite VR games.

What would I pay? $30 for this is a steal.  This has some of the most fun and unique gameplay I have seen in awhile and the when you combine all the elements at play, the game constantly feels fresh, even through multiple playthroughs.  This is a true VR gem!

Tribetoy provided The VR Grid with a  code for this game and, regardless of this review, we thank them for that!