Anyone who has followed the VR scene over the past few years will probably be aware of the Budget Cuts name. The original game was hugely hyped within VR circles following a demo that released on Steam at the very dawn of consumer VR. Back in 2016, no-one had seen a proper action-adventure title in VR and the Budget Cuts demo provided a brilliant vertical slice of the game, one that incorporated a novel and elegant locomotion system that gameified (yes, I just invented a word!) a teleportation system by making the teleporting function a gun that fired a portal that could be bounced round corners, onto ledges, etc. The portal could also be looked through and used as a semi-surveillance system. It felt hugely innovative and fresh in 2016. Unfortunately, the full game took a long time to come to market and, while decent, it was plagued by serious bugs and performance issues at launch and never felt like it fully fulfilled the promise of that demo. 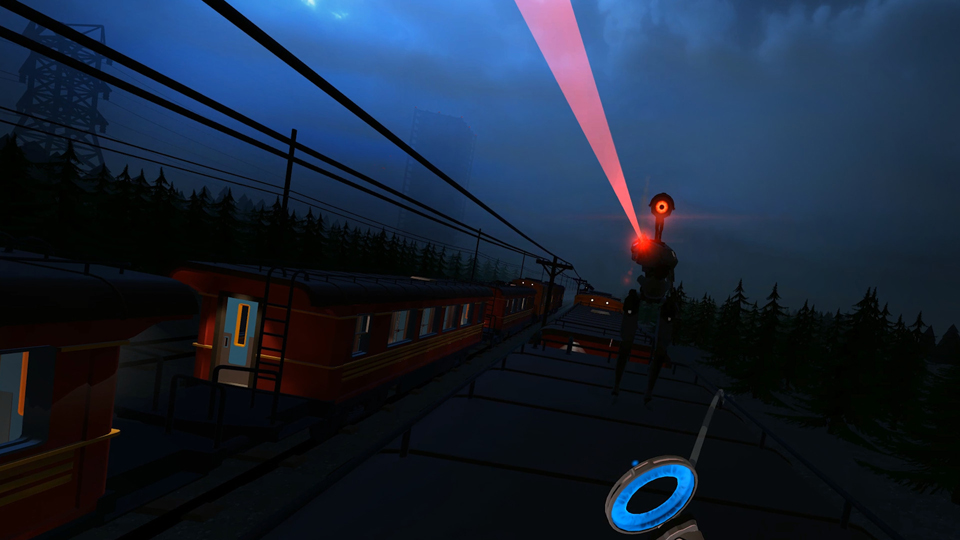 If you played the first game…you know what to expect from these guys!

Its sequel, Budget Cuts 2: Mission Insolvency, released on December the 12th of last year, takes considerable steps to fulfil that promise by largely building on the first game while polishing up key areas. The core gameplay and overall look and feel of the game stays largely the same and the second game begins straight after the end of the first. After escaping a Transcorp office, you’re now on a mission to find their central mainframe and shut it down. This involves you navigating across a variety of environments – using the teleport gun – to avoid or fight robot sentries as you complete simple tasks and puzzles.

For me, Budget Cuts 2 really is a game of two halves. It gets so much right in the first half of the game but falls apart (sometimes literally) in the second part. The first half of the game is great as it gently iterates on the core Budget Cuts formula by placing you in really interesting environments (such as a train, then outside in a city), clearly communicating your objectives while having a manageable amount of robot sentries to deal with. The early environments give you lots of options regarding how you tackle these objectives and it’s a real thrill to sit in an air duct watching the robot sentries, planning your next move and then executing a perfectly timed teleport and quick knife throw to efficiently take them out. The game really asks you to physically move around a lot and it’s great to duck and lean around furniture and environments as you aim to stealth past your robot adversaries. I also really liked how in these early environments there are actual set pieces and interesting gameplay mechanics at play. 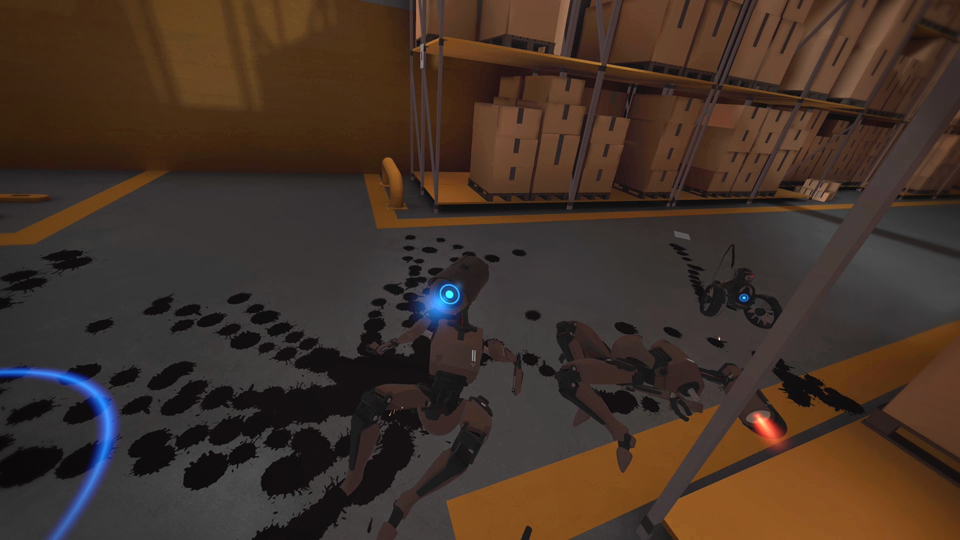 The team at Neat Corporation have also fixed the knife throwing issues of the first game (where it was basically impossible to get the throwing trajectory right) and it’s super satisfying now to land a hit on robot with a well-placed throw. There’s a simplicity, skill and balance to using the knives and you fall into a satisfying stealth-based gameplay loop when they are the main weapon in your armoury at the start of the game.

Problems start to arise when the bow and arrow, a new feature for the sequel, is introduced. I feel like it’s introduction is when the game starts to morph away from the stealth principles that stood it so well up to that point. Of course the game needs to introduce new elements, but I feel that there’s a disconnect between what the bow is capable of and what the game expects from you once it’s introduced. While it looks really cool, it’s too difficult to use properly. I was constantly getting the angle and height of my shots wrong as the visual indicators just don’t confer enough information. More annoyingly, it’s incredibly fiddly to nock an arrow. Firstly, you need to equip the bow in one hand, then in your other hand you need to equip a tool that allows you to grab an arrow, then you need bring up a menu on your bow hand to grab an arrow out of that menu before physically nocking the arrow! It takes time to learn this and even after loads of practice I still couldn’t do it quickly enough if there was more than one enemy bearing down on my position. It led to some immensely frustrating deaths and I found that actually I was just better off forgetting about the bow and ended up simply throwing the arrows at enemies. 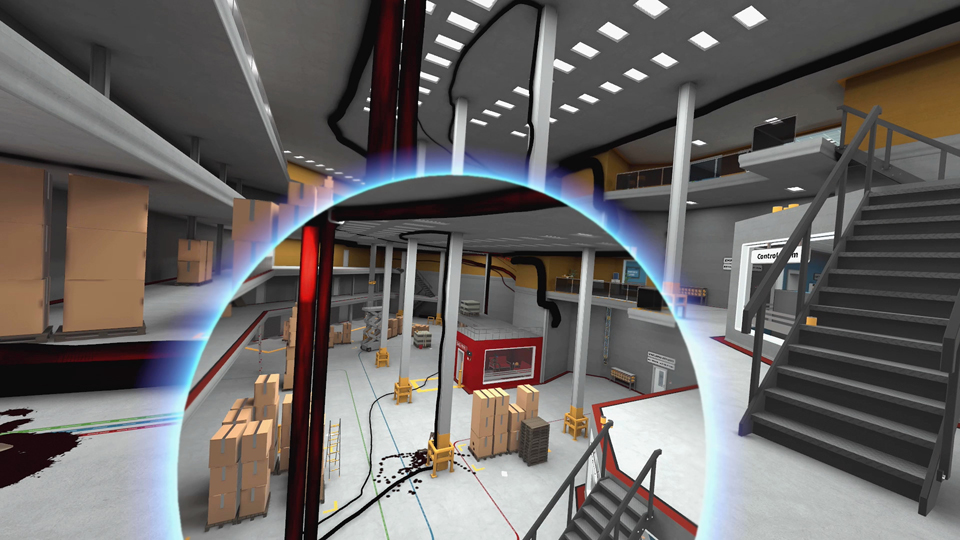 I never get tired of the portal effect in VR.

Once the bow is introduced you’re also asked to deal with a far higher numbers of robot sentries, all of which can one-shot kill you and some of which are flying drones or highly armoured guards, in large and complex areas. The game also starts to make objectives more complicated and often requires you to scour an area to find an item or tool to progress (pro tip: never, ever take the screwdriver out of your inventory!). I feel like the game is saying to you, “hey, you should be able to deal with these enemies now as you’ve got a bow and arrow” but the bow is so fiddly and inaccurate to use consistently that I constantly felt ill-equipped to deal with the situation ahead and it’s just not that enjoyable to try to explore an area when you can be killed in an instant and sent back to the last checkpoint. Rather than tactically planning out my next move and how to take down an enemy, I increasingly found myself abusing the teleporting gun and cheesing my way through tough enemy encounters by taking advantage of their poor AI – doors and windows are the downfall of this particular robot incursion!

The introduction of more enemies and larger environments also introduces performance issues that reminded me of the problems the first game had. The game really starts to chug when multiple enemies are on screen and I felt like generally the later stages have not received the same care and attention that the first few levels have. These later stages tend to revert to the first game’s offices or uninspiring warehouses and the set pieces and interesting set-ups of the first half are largely jettisoned. That being said, while there are some performance issues in the later levels it’s a far more stable and polished game than the first and a lot of the small but annoying bugs and issues that the first game had have been ironed out. Furthermore, while simple, the overall look and feel of the game is great. The story is well told and all of the voice acting is really on point (which is unusual for a VR game). I actually laughed out loud at multiple moments and the game really nails the tongue-in-cheek humour. 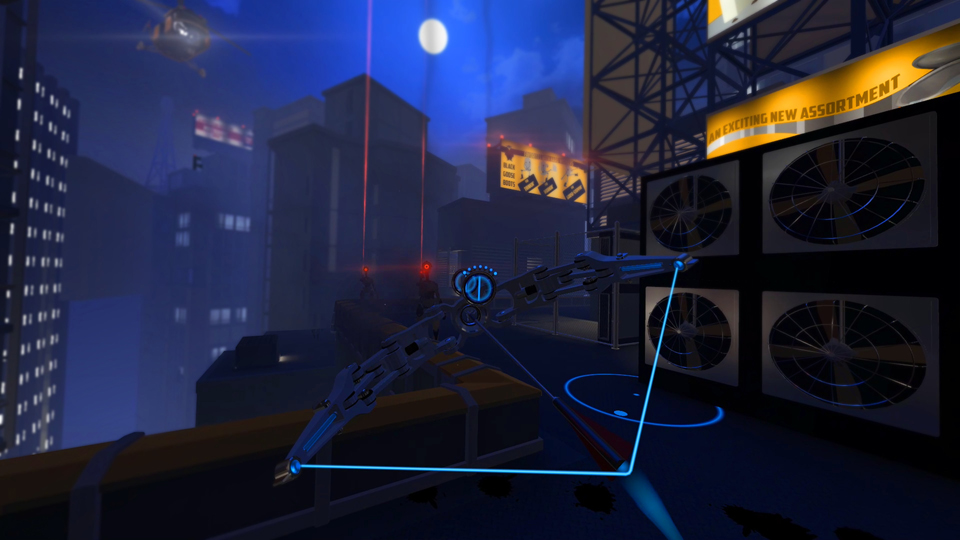 The crossbow is kind of a chore

As you can probably tell, I’m quite conflicted over Budget Cuts 2. The game starts off so strongly and I really felt like I was playing the game that was finally delivering on the hype generated from that first demo. As the game progressed though, it couldn’t keep up that initial impetus and imagination and the larger areas it presents actually construe to move it away from its most compelling stealth-based gameplay loop. Overall, it’s still a good game and far better and more accomplished than the majority of VR titles out there. I just wish the developers could have maintained and built upon that early momentum.

What would I expect to pay? The game costs £23.79 which is a fair price given there’s around 4-6 hours of solid gameplay here and the overall package is accomplished and entertaining. Saying that, the price does start to look less good value when compared to Asgard’s Wrath and Boneworks which are similarly priced but offer more content and I would argue more entertainment value.