So, if you’re thinking to yourself ‘Man, I was expecting a lot more shooter experiences with my PSVR’ than you are not alone.  In an effort to curb the never-ending swath of ‘Turret Shooters’ arriving in VR, Sony seems to be limiting the amount of FPS experiences for the headset.  So that leaves us with not a lot to choose from in the Shooter Genre, and so comes ‘Mortal Blitz’.  An FPS you have played a hundred times before with it treading little to no new ground as far as the genre is concerned.  It does however competently utilize VR and play like a throw back to cover-shooters of old. 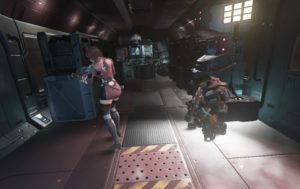 Meet your squad, ‘Hot Chick’ and ‘Tough Dude’…they don’t really help you out a lot either.

I honestly couldn’t tell you the plot of this title.  You are in some kind of Good-guy squad with the titular ‘badass guy’ and ‘hot chick in a ridiculous combat outfit’ as your companions.  The opening mission have you battling futuristic soldiers in an attempt to recover an old team mate and the data he may be carrying.  That might even be wrong, as I stated, the plot here is secondary to the action.  You’ll navigate through the 5 missions available (with more episodes promised) and blast your way to the subdued conclusion.  The ‘plot’ takes a turn half way through and the enemies coming at you switch up as well.

You can play with DS4 or move controllers which is nice, but if you have the Move option, then stay away from the gamepads…this was made for Move.  You’ll see your hands in VR so pointing at what you want and pulling the triggers is how this goes.  To the games compliment, they have fully utilized the Move controller with each button performing a different action or switching weapons.  In order to interact with the environment, you have a telekinetic ability that not only pulls levers, but can pick up certain objects to be used as temporary cover, or hurled at the enemy as a bonus weapon.  Navigation is performed after you clear out the section you are in and teleporting to the next waypoint and begin being assaulted again.  No free movement here.  Teleport, fend off attackers and repeat.  It’ll take time to adjust to the button options, it wasn’t until the last mission when I was comfortably switching weapons, reloading and activating abilities smoothly.

The one interesting mechanic added to this is a slow-motion telekinesis mode.  Enemies, having taken enough damage, will become temporarily stunned.  What this does is allow you to target them and activate your telekinetic power, raising them helplessly in the air to be dispatched in slo-mo.  The major benefit to this is that enemies killed in this fashion offer up health and other bonuses and dramatically increase your final score (which may or may not matter to you anyways).  It’s a great mechanic with one glaring flaw.  2 of the missions are timed, but when you use this attack, even though time slows down, the count down timer doesn’t match that slow down, so over using that ability could cost you the mission.  Each mission allows you 3 lives and the counter resets when you die, so there is very little punishment in the event of death.

It looks good, not great, but not terrible…like a super polished PS2/360 game.  Corridors and levels generally feel small and stages don’t carry a tonne of detail.  Enemy models repeat themselves fast and make the same sounds over and over.  The 4 guns you pick up throughout the levels play fine, but explosives felt subdued and lacked and that feeling of power.  What’s here does the job, but in no way is it going to blow your mind. 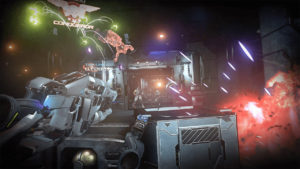 When the action ramps up, so too does the fun.

The audio suffers the same fate, with most sounds coming off as quiet or subdued or just repetitive.  I did like that when explosions occurred to close to you, temporary loss of hearing occurred.  Headphones will also help you determine which direction enemies are attacking you from.  Most of the action occurs in front of you, but every now and than you are assailed from the side so be aware.

Ultimately, I had fun with this shooter, it’s shallow for sure and basically copies the light-gun gameplay of old, but in VR you get to duck behind cover and lean in and out trying to avoid taking damage while dispatching your foes.  It’s fun!  The pace of this game is quick and though the first Episode can be beaten in less than an hour, the unlocked harder difficulties will offer up enough challenge to have you playing through a few more times.   It’s not the best shooter experience in VR, but you could do far worse than this, and with the promise of new content (which sounds free) this is still worth your time.

What would I pay? In its current state, $10 to $15 seems more reasonable.  The future content will definitely change this depending on its price.  I had fun and it did scratch the action heavy FPS itch I’ve had since VR came out.  I just want more.