I’m at a bit of a loss when it comes to Cold Iron. I really didn’t have any expectations going is as the teaser trailer didn’t show too much.  Self described as the “boss rush gameplay of Cuphead, the white-knuckled western aesthetic of Red Dead Redemption, the tight gunplay of Arizona Sunshine and Raw Data, and the magic and mystery of The Dark Tower”, one can’t help but get excited for what sounds like a crazy merging of genres.  Those expecting something amazing will be let down.  While each one of those comparisons may be apt in some way or another, what this boils down to is a quickdraw shooter that goes beyond the wild west. 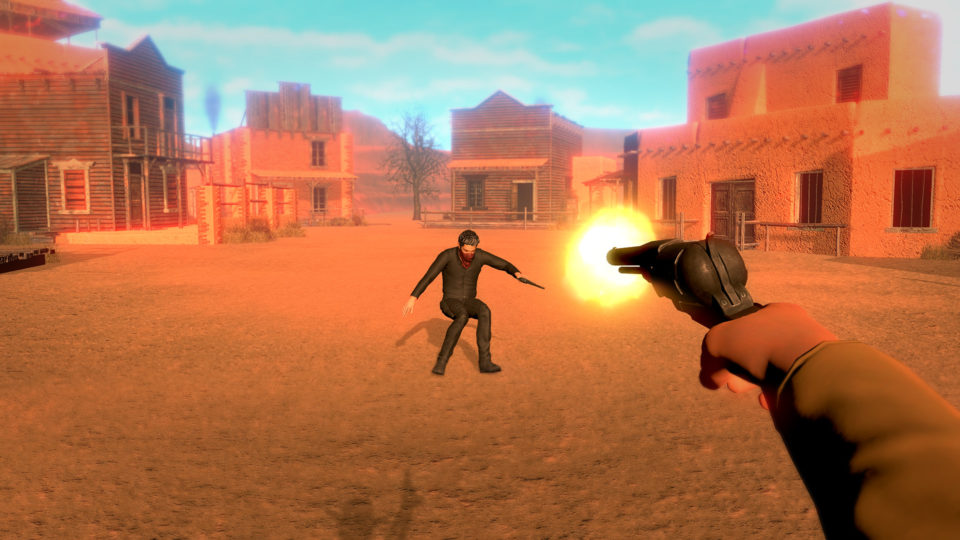 Cold Iron starts of like any other western shooter… with you killing someone.

Even the trailer for this game, which I assumed showed gameplay footage, led me to think there was some kind of movement mechanic involved here, there is not.  After a brief prologue that explains your main goal, avenging your father, the game places you in setting after setting where you must be the fastest to draw your weapon against a variety of opponents.   In this regard, the game shines.  Naturally, at the games onset, the baddies you face are relatively simple but as the you progress things get a little more…insane.  Starting off in the ol’ west, I expected to face off against a bunch brigands

until I reach the end-boss and in fact, that’s exactly what happened…in the first stage.  Each subsequent stage gets a little more surreal as you literally travel through space and time and face opponents ranging from magic wielding dryads to a futuristic sniper and so many more.  I don’t really want to spoil to many of the opponents as each new one is a treat, but for all intents and purposes, that’s the game. 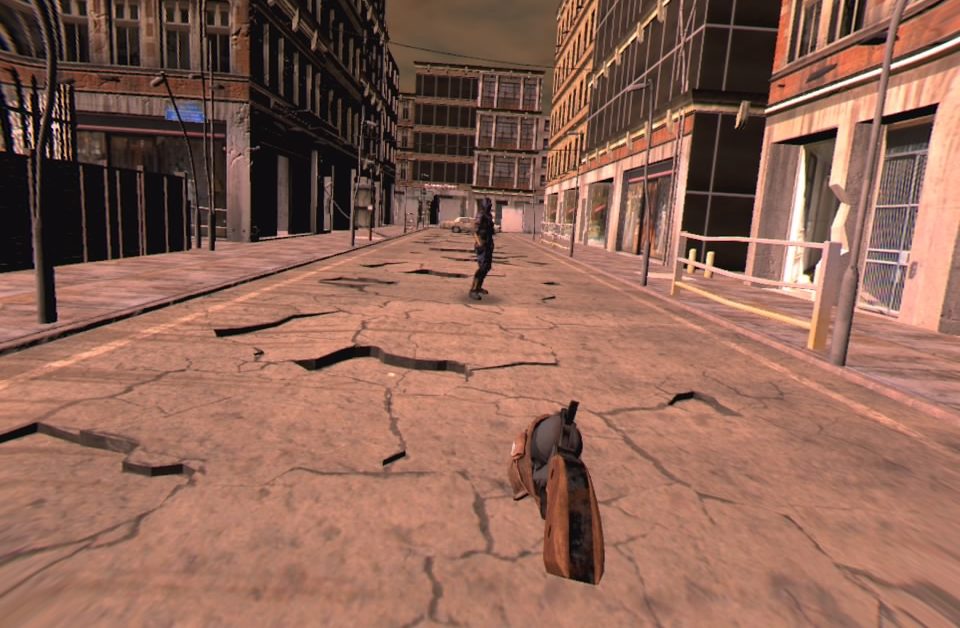 In the future is no match for your gun.

Requiring only 1 move controller, you need to keep your gun holstered until the bell sounds signalling that it is time to shoot.  What initially seemed like an oversight in the game is that to holster you gun, Cold Iron, you need to tilt it down just enough to activate the holster so whether you shoot from the hip (not recommended) or hold the gun up to your head, as long as you tilt that gun down, it counts as being holstered.  So, before each match, you face your enemy and can mess around a bit, but once you holster your weapon, the world seemingly slows down, and you need to wait for the ring of the bell and shoot.  Soon enough enemies use this to your disadvantage by trying to distract you with whistling or using some crazy tactics (like teleportation or making clones of themselves) that ramp up the challenge.  Each enemy’s strategy has a flaw and it’s here where you must adapt or die.   Once that bell sounds, you better be quick, as some of your foes are nightmarishly fast and I found myself typically dying every time I met the next baddie as it took a few too many deaths before I figured out their strategy.  Each world has 3 enemies, and to defeat them, you must win 5 out of 10 duels.  Failure results in starting back at the beginning of the world, which frustrated initially, but once you have solved an enemy’s strategy, they only get easier to kill.  Oh, and drawing your weapon before the bell sounds results in an instant loss, so don’t do that! 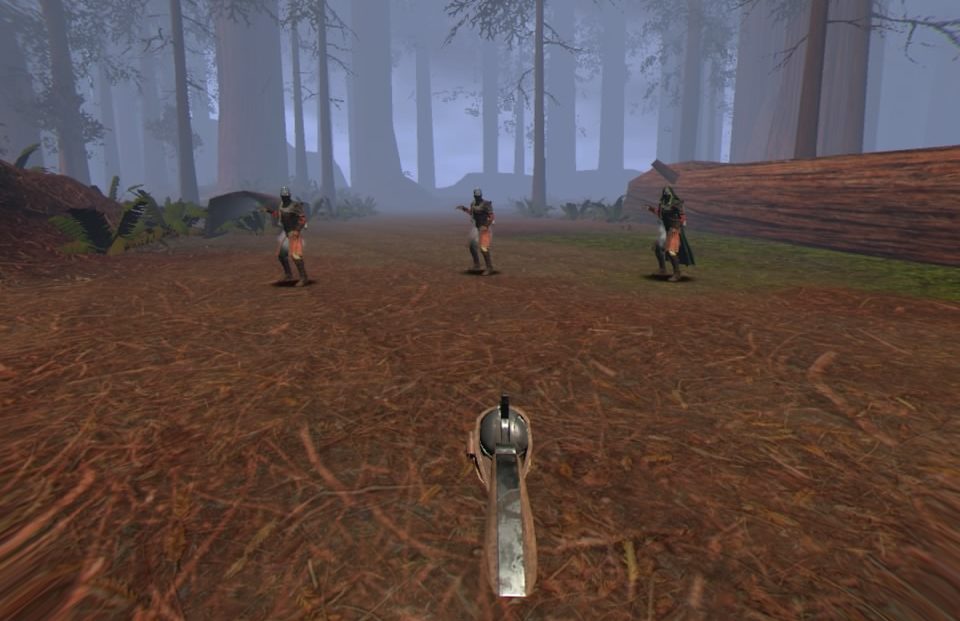 Come the 2nd world…things take a turn for the bizarre.

I liked the variety of stages here, but as far as visual fidelity goes, Cold Iron’s smaller budget roots show.  Textures are flat, and stages feel barren with little to no activity happening around you.  This does add to the tension a bit but I still would have liked to see the environments fleshed out a bit more.  As I said the enemies before you come in a variety of shapes and sizes and look decent, though once again, nothing to write home about.  Everything here does the job, and thankfully given the simplicity of the game, that’s all that’s needed.  There are some cinematics that take place in-between each stage, but they are stark, short and to the point, just there to advance the plot and stitch each stage together.  The game is narrated by voice actor with a western drawl right out of the movies and does a great job of setting the scene and lining up your next task.

Besides the duels and cinematics, there are bonus stages that involve shooting melons out of the sky before they hit the ground.  These cast each stage in a dusk like silhouette of sorts and each melon, when shot, lights up the sky with an explosive firework.  You can access this, and all the stages you have unlocked from the main menu/western style saloon.  The game also has a ranking system which comes down to accuracy, shots fired and draw speed, the latter of which seems to be the most important factor of the bunch. 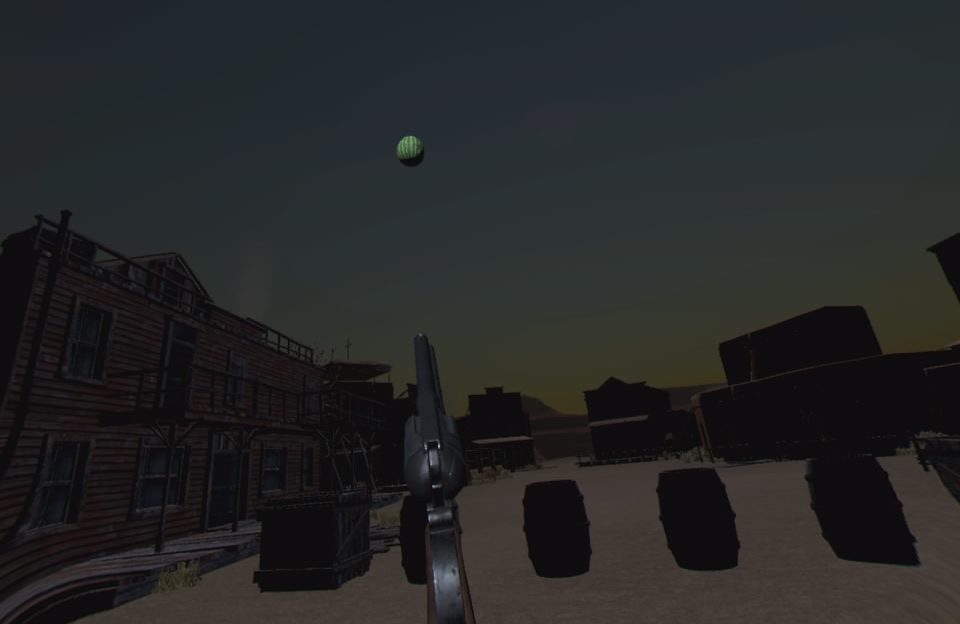 I enjoyed my time in (and with) Cold Iron.  Each duel not only pushed me to my quick draw limits but forced me to exceed them on multiple occasions.  While there is most definitely some aim assist happening in the game, I still missed my fair share of shots in my efforts to be the fastest.  The focus is on speed and while I have beaten the main story, I am not fast enough to unlock to final boss, which involves meeting or exceeding the S ranked time on many of the opponents.  Even without that last boss, the conclusion to this game is both epic and satisfying and even though the narrative may be a little lacking, I was happy with the story presented.  Cold Iron is the kind of game that keeps calling you back and just asks you to try one more time.  It took me around an hour and half to get through the main campaign and in theory, if your good enough, that’s about all it would take.  I’m still trying to push my reflexes to face the final…FINAL boss and I’m not gonna lie, I keep going back for a round or 2 to do so and enjoy it every time.

What would I pay?  I had fun in Cold Iron but given it simplistic story and gameplay as well as the relatively short play time, $20 just seems a little high when compared to other recent releases in the same price range.  $10 to $15 seems way more appropriate here, but like I said, I did have a good time.

Catch & Release LLC  provided The VR Grid with a review code for this title and, regarldess of this review, we thank them for that!