Get stranded on a mysterious island, uncover its secrets, discover hidden relics, face a horde of armed soldiers as you move from cover to cover while fighting back with explosives and firearms…sound familiar?  Immortal Legacy: The Jade Cipher borrows heavily from games like Uncharted and Tomb Raider (along with a few more games) and brings us VR users a 1st person adventure that many of us have been waiting for…at least on paper. That may sound like a dream fulfilled but in practice it may not be what everyone was hoping for. 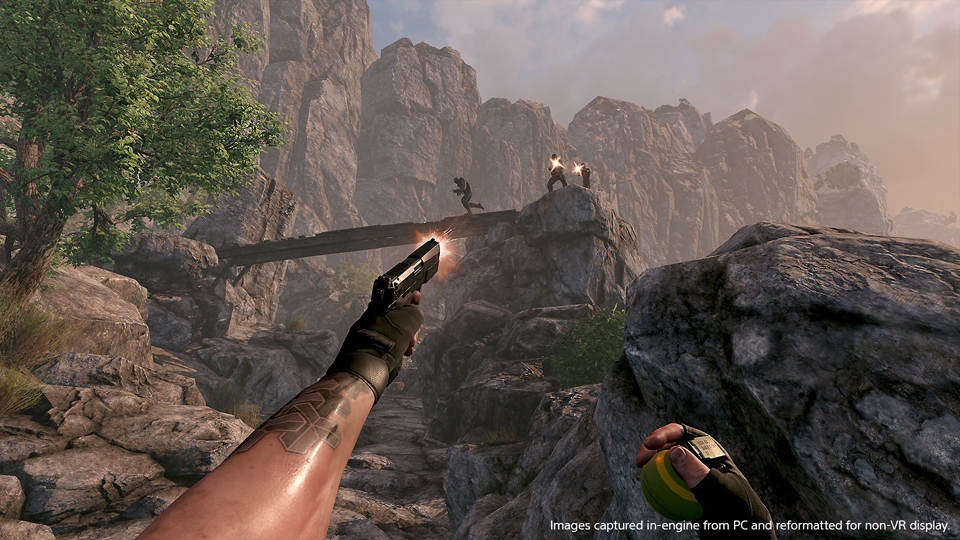 I need to talk about the controls as they are all over the map with a little VR goodness and a lot more missteps that hearken back to our 1st days in the headset 3 years ago.   This is a full motion adventure with optional click or smooth turning.  Unfortunately, the smooth turning option has easily the most intrusive blinders I have ever seen, and I actually chose to go with click-turning as it allowed me to play more comfortably.  It’s Moves only here with each of your hands having its own menu system.  You can toggle though each hands items (up to 6) or bring both menu’s up to swap items from each hand.  Movement speed is depressingly slow with options for the slowest walk ever or a “jog”, which is barely any faster.  Turning right is on the right Move with left on the other meaning to move somewhat organically through the environment requires you to constantly switch which walk button you are using to turn and making finite adjustments is a nightmare.  Should you veer only a few degrees away from the camera, still well within tracking range, a large circle appears at the base of your vision directing you to center up and will stay there long after you do.  You can strafe and move backwards as well by button presses meaning all the necessary options are here, just poorly implemented and feels like you are controlling a tank, with limiting control options and comfort settings that seriously hurt the game.  Even toward the end of my play, these controls never felt comfortable. 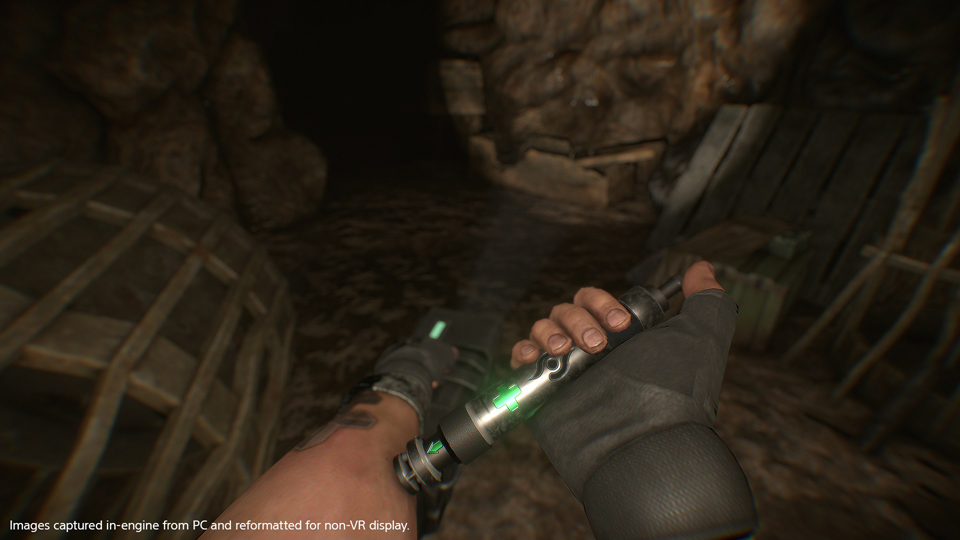 Suffering through the controls though reveals a game with a fair bit of depth and character utilizing tropes many of us have been clamouring for since we 1st put on the headset.  You will pick up a lot of weapons, many of which require 2-hands to keep stable making the combat fairly fun, if not a bit stock with head shots being your friend as on easy mode, the enemies are bullet sponges and on medium mode making them seem like bullet eating machines absorbing insane amounts of lead.  Reloading any weapon requires a quick shake of whichever hand is holding that gun.   As you explore the island, you’ll find documents loaded with text to read and recordings the reveal secrets about the going-ons occurring around you.  There’s a climbing mechanic that pops up and is criminally under utilized as well as smaller sections that will require you push levers, hack away barriers and few more one-off options which mix up the action nicely.

The Jade Cipher is visually impressive with large scale environments and an attention to detail that we don’t get enough of in VR.  The stages are mostly static, other then exploding barrels or scripted events, and the variety in some of the levels and enemies is welcome.  Lighting effects are great, especially in the early goings of the game and when you nab a flashlight later though I did find some of the cliff-side areas to look a little drab at times, as if shadow effects weren’t applied properly making everything look a little flat. Still, the sense of scale in the more open sections of the game are some of the best visuals I have seen in VR with impressive draw distance and wonderous attention to detail.  The initial scripted moments give you a body though the actual game only draws in your arms and puts their position somewhere in the your neck chest area, creating a large disconnect between you and your virtual arms.  NPC’s animate very well reminding me of goons seen in Tomb Raider and games like it.  They look like typical mercenaries armed to the teeth and only out to stop you, but they are competent in combat making some of these encounters pretty fun.  New and surprising plot twists in the latter half of the game add a lot to presentation with monstrous enemies popping up and some environmental effects that look stunning in the headset. 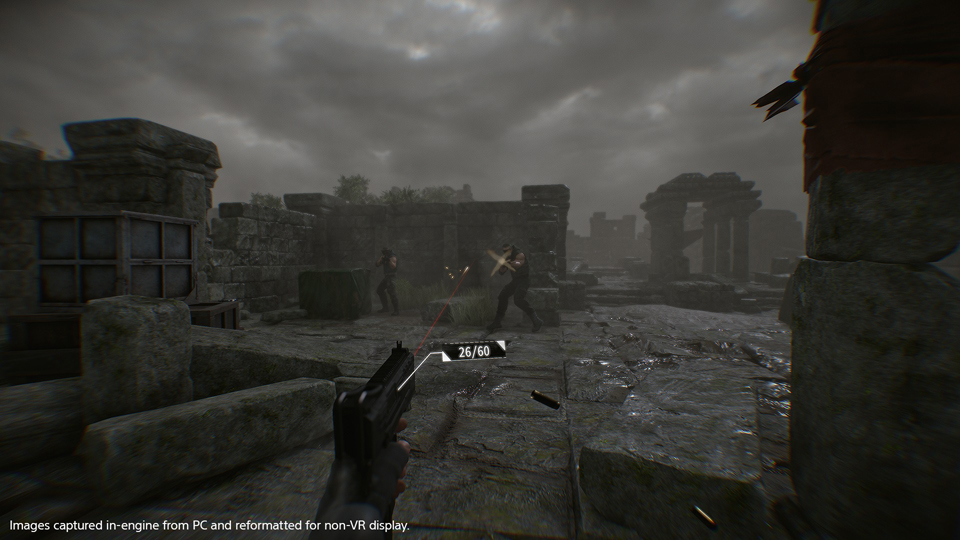 Some of the battles get pretty intense!

The voice acting in here is way better then I would have expected given that this was developed in China from a smaller studio but they hired a decent team of actors who may be a little over-the-top in this one, but still deliver the goods when it comes to moving the story along.  Depending on what you are doing currently, there may be no music playing as you slowly move through the environment, though certain sections may have some eerie orchestral music to keep you on your toes and whenever you get into your next battle, rest assured the action music kicks in, typical of the genre.  The 3D audio is pretty bang on, especially when in conversation with someone nearby or when you a receiving a message via your communication device in your right ear and does a great job at immersing you in this strange world, though on occasion it does jump around, especially with the environmental effects. 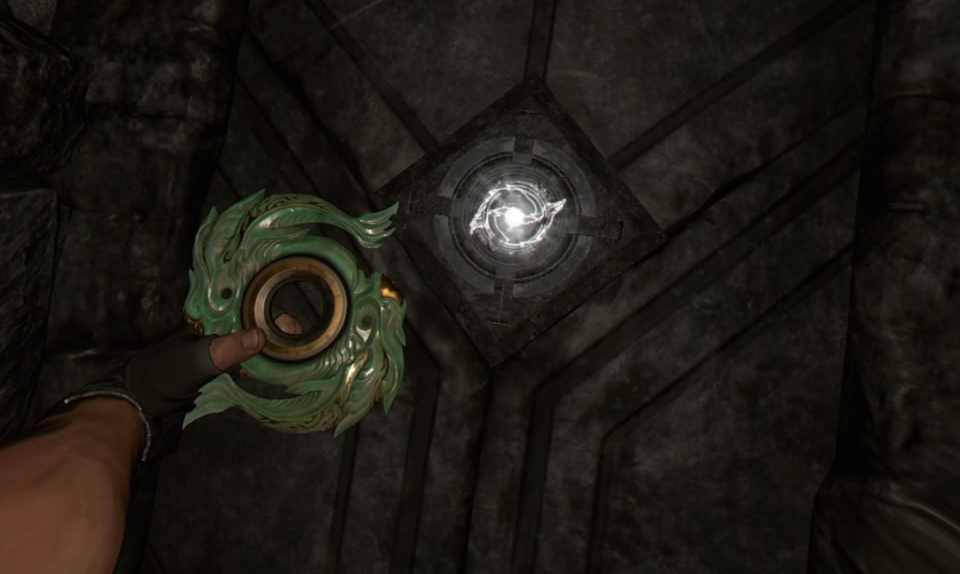 I wonder where this goes?

I’ve mentioned twice now just how similar this game is to the recent Tomb Raider series of games and seems to borrow quite heavily from them at times with gunplay, puzzles, climbing and ancient legends brought to life.  That’s not to say this is those games in VR as Immortal Legacy still suffers from its smaller scale roots and much more limited interaction.  Combine that with the cumbersome controls and I think The Jade Cipher will be received by many quite differently.  I understand why the devs made some control decisions, especially because you can dual-wield and move in combat, but I can’t excuse just how annoying the controls are.  I found myself constantly scrolling through my menus to find the item I wanted, hitting the wrong button to turn or strafe on numerous occasions and just generally getting annoyed at the entire control layout.  Still, pushing past the controls, I really enjoyed the combat sections, light exploration and the story, which gets all kinds of nuts in like a solid B-movie kind of way, and the overall scope of the game.  While I hope the developers adjust the controls to make them a little more user friendly, upcoming support for the 3Drudder could alleviate SOME of the issues currently plaguing the game. 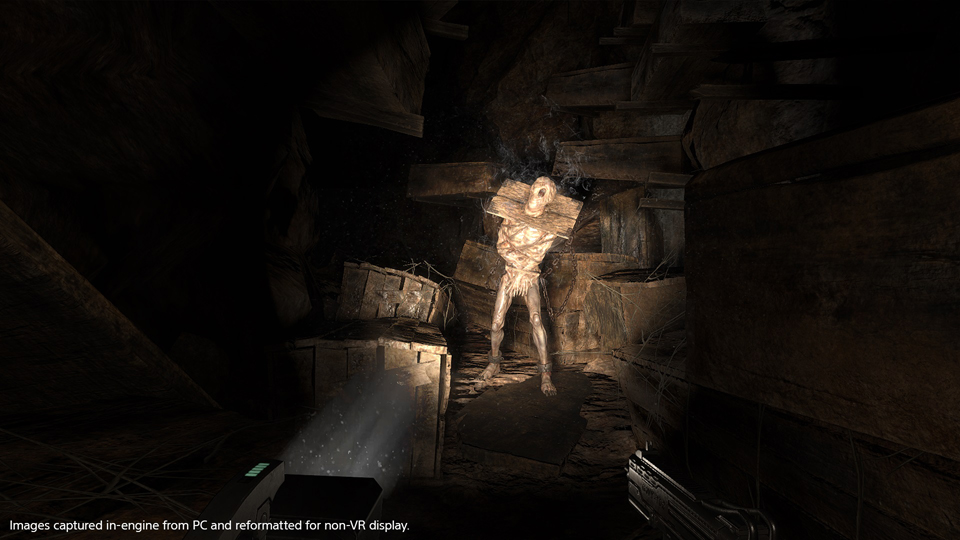 Things get weird…and then they get weirder.

For all it’s flaws, I can’t help but really like Immortal Legacy for both what it is and what it is trying to be.  We don’t get enough 1st person campaign shooter adventures in VR and this one, despite its control issues, delivers what it needs to make for an engaging experience clocking in somewhere in the 5-hour range.  If you are a fan of games like Arizona Sunshine, Killing Floor or even Dark Legion then I think you will be pleasantly surprised by this…if you can get past the controls.

What would I pay?  In all honesty, if the controls were fixed a bit, I think I’d be happy with a $30 price tag.  That said, in its current state, I’m cool with the $20 asking price as this did deliver a few ‘wow’ moments and a lot of fun and varied gameplay. The story feels cut short thanks to a few unresolved plot issues and a big ‘to be continued’ type ending, but with luck a sequel will expand upon the story and maybe fix some of the issues mentioned here.

Sony Interactive Entertainment provided The VR Grid with a press code for this title and, regardless of this review, we thank thank them for that!