I had no idea what this game was until it was announced as coming out last week, though a quick look at the cover art had me thinking it may be some type of platformer, which after Astrobot, I was a little excited for.  Suffice to say, my assumptions were wrong with BugsBoxVR actually being a top down casual action puzzler, very much in the vein of the Bomberman series of games, though carrying a lot more mechanics.  Apparently, Bugs have invaded Honeyland and it’s up to you to fight them off by whatever means you can which really is nothing more then an excuse to setup gameplay as nothing in the game actually gives you this premise, I took that from the store description. 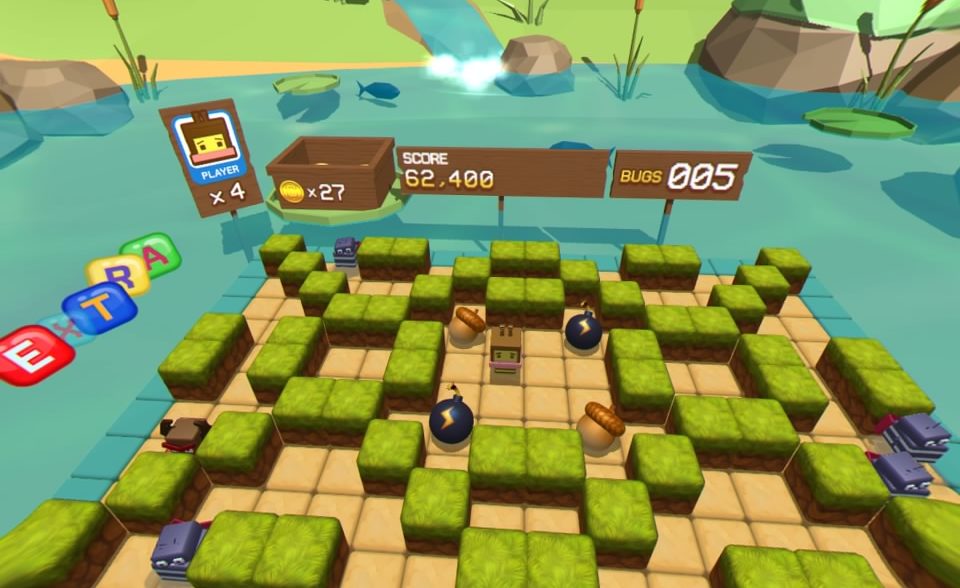 Definitely has a Bomberman vibe

BugsBoxVR feels like a mobile port with very simple controls making for a DS4 only experience.  You control a little dude who is tasked with navigating some small maze-like maps while bugs move around slowly making their way toward you.  All you can do is push and activate objects with each map broken up into a grid which you can move around on space by space with objects creating boundaries for both you and the enemies.  You can push basic blocks across a stage, killing any bugs in their path, activate bombs which explode and can be chained for multiple explosions.  A bunch more items pop up around the map including temporary buffs that may make the enemies tiny, allowing you to walk over them to kill them or stun or slow them down.  As enemies are introduced, some have abilities to take you out, attacking you with earthquakes or shooting lasers at you and host of other abilities.  There are only 3 modes in here; Classic which is a static campaign that gives you a few lives and tasks you with seeing just how far you can make it before you die.   Endless mode places you in a larger stage that pits wave after wave at you while randomly changing up that stage every wave, once again tasking you with seeing just how long you can last.  Lastly is practice mode, which is the same, with very little consequence and just feels like an unnecessary inclusion.  You can unlock a few different characters each of which has a different ability you can use to aid you.  Balloons float by that can give you extra lives or other bonuses and overall, while simple, the design of this game is very refined. 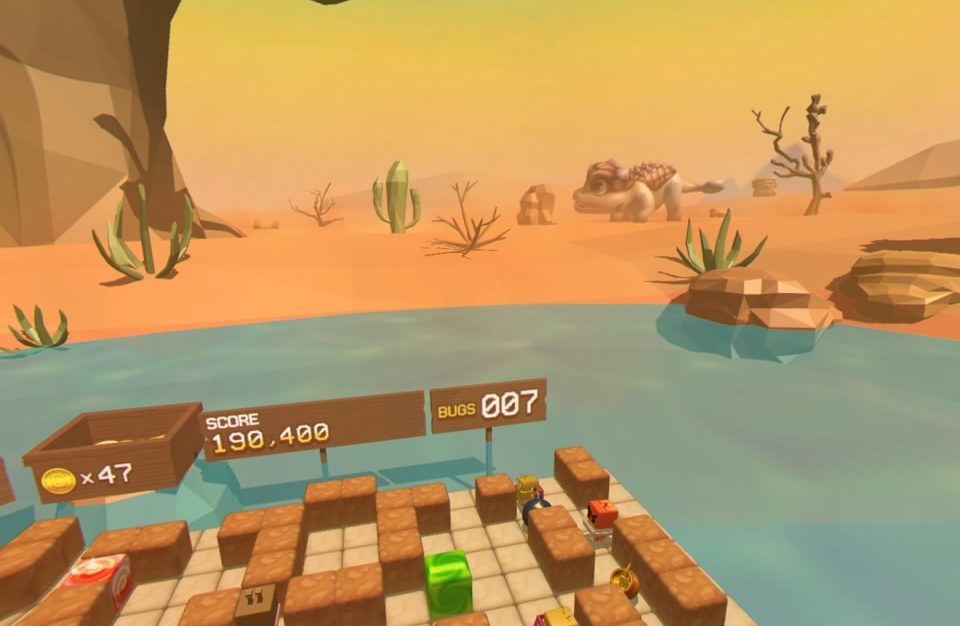 The backgrounds are pretty bland

Simple is the best way I can describe the look and feel of the game.  You look down upon the play area, which is a rectangular floating island peppered with little cube shaped bushes that you can push or destroy.  little square shaped enemies (everything is square sharped, really) hop around the map, each with their own abilities while balloons fly overhead.  The background features some stark landscapes with very cartoonish looking dinosaurs and other animals with everything being very bright and cheerful.  As you progress through the campaign the theme of the stages changes from summer to winter or a lava filled level with everything having a very crisp look.  A really grating track loops over and over while the commentator spouts out words like ‘combo’ and ‘complete’ when you perform certain actions with other little cutesy sound peppering the entirety of the game.

My gripes are with the game itself.  The campaign contains 100 stages, though I haven’t even come close to seeing if that’s true as once you exhaust all your lives, that’s it!  You need to restart the campaign from the 1st stage which just gets grating.  I’m sure the idea behind this is to make you get better and urge the player to improve their skills, but after a bunch of deaths, I just didn’t care.  As I said, this feels like a mobile game and while the port to VR is perfectly fine, it still feels shallow.  Also, X and O have been seemingly reversed when compared to like EVERY OTHER GAME with O being used to select menu options and X used to go back, which just threw me off a bit.  Lastly would be the characters you can unlock, which I have no idea how to do.  I’ve made it up to wave 30, collected a bunch of coins through multiple plays and they are still greyed out, but I’m honestly so sick of this game I have no desire to even attempt it one more time. 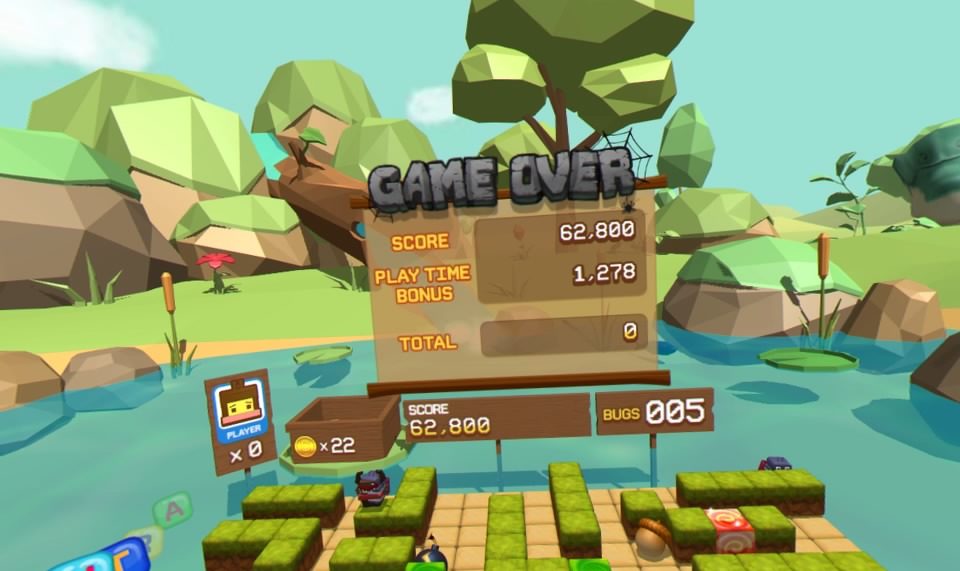 You are going to see this message way too much

There really isn’t to much to say about BugsBoxVR.  Everything works like it should and it really is a polished, if not simplistic experience.  This a Bomberman variant in VR that just wears out it’s welcome long before you’ll every beat the campaign.  Endless mode just doubles down on that monotony and when it’s all said and done, I was more bored with the mechanics and frustrated with the campaign then anything else, ruining the entirety of the experience for myself.

What would I pay? $5 tops.  There is a free, non-VR version of this game available for smart phones, so I say give that a try before you invest any money in this version.  VR doesn’t add anything other then a VR skin and while it does feel like polished experience, the $17 price tag is nuts for this!