Traffic jams suck. The only time I have ever enjoyed being stuck in a car was when I was a child, clutching my Gameboy, without a care in the world about arriving at any given destination. Now, unfortunately, a traffic jam means a loss of time and money and pressing pause every thirty seconds to inch my car a foot or two makes mobile gaming a lot less fun. So, what is a gamer to do? A good start would be blowing the rotten scoundrels that caused the traffic jam sky high! 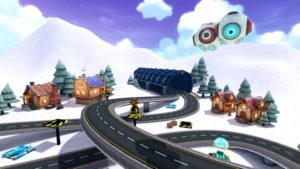 Evil Robot Traffic Jam is a tower defence style game that has players taking on the role of a member of the Evil Robot Defense Force. Apparently evil robots have found the best way to wreak havoc on humanity is to trap them all in unending gridlock. Your mission; destroy all the evil robot vehicles before they get the chance to carry out their fiendish plan.

The concept is simple, stop the little cars from traveling the length of the road and making it to the other side. You will have a small amount of currency to spend on weapons that you can then place around the road before starting each game and you then you let the automated weaponry do its thing while you collect currency for each vehicle destroyed. This currency can be used to unlock new locations to place your weapons, buy more weapons, or upgrade the weapons you already have. You can also sell your weapons for a loss should you find yourself needing to swap out or do an emergency upgrade before a boss fight. That’s right, evil robot car boss fights are a thing.

The selection of weaponry is decent and boasts both offensive and defensive items. From rail guns and anti air rockets to frost towers and hacking drones, the assortment of goodies gives you a fair degree of freedom of choice once you have the coins to afford it. That said, the prices might seem a little steep for some of the weapons at first but, given their performance and that you make more starting cash as you get better at the game, the overall balance seems well done. You also get a powerup weapon that charges little by little as you take down bots. Unfortunately, this weapon changes at one point from a guided orbital strike to some clunky car dropping thing you have very little control over. I want my orbital strike back! Hacking drones, on the other hand, are free but you only get a limited number each round making them strategic assets. These drones not only damage the target but also force the target to drive into other evil robot cars, damaging them as well. I am guilty of laughing maniacally while this scenario plays out, that’s just good game design at work in my humble opinion.

The controls are extremely simple. You point and click. The only downside is that you cannot map out your own controls and I would have really liked to use one controller to point and the other to select and sell. It sounds like a small gripe, but it would feel a little more natural and that goes a long way.  You can walk around the game map but only in a very limited range, not that it really matters because you can see all the relevant items and information by simply turning your head. That is because the level designs are well done and fit all the experience into a rather small space without making the game feel small. The map is literally (well, virtually) built around you.

The graphics are pleasing with a vibrant cartoonish look. Everything was polished with only a few things that looked like they might have received a little less love than the other assets. The birds that sometimes fly over did look a little flat. Sorry birds, a fella just needs more dimensions to be satisfied these days. Overall the environments looked sharp and fun to take in. The audio was just as pleasing as the visuals. The game has an upbeat soundtrack that’s not too distracting. This was nice because it is usually the first thing I turn off after a round or two in similar games. The music even provided an audible cue when the boss fights were about to begin which was a nice little touch. The sound effects had a sci fi vibe going that fit in nicely and the various power ups all had a noticeable notification sound that I was thankful for.  I almost never remembered to check the meter to see when it was ready and this saved my skin a few times. 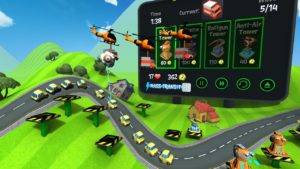 Those helicopters do get in the way, kill them quickly!

The more I played Evil Robot Traffic Jam the more I found myself enjoying it. It was simple to get into and got progressively difficult but remained fun to try, even after I got stuck on a level. I did find that the flying evil robot enemies got a little annoying as they would block your view of the purchase and info screen for an aggravating amount of time. The one thing that shines out above all else in this game is how well the level design pulls off putting the player in their own little battlefield. I really enjoyed that feeling of total control without overwhelming scale. If you are a fan of tower defence games or even just looking to try one for the first time, I cannot find a single reason why this wouldn’t be a suitable option and a terrific addition to your gaming libraries.

What would I pay? $8.99 price is a reasonable amount for this game but I think that a $4.99 price tag would have more gamers that normally wouldn’t consider tower defence style games taking a more serious look it. I would welcome it into my catalog at that price point as well.

Element Games provided theVRgrid with a review copy for this game and, regardless of our score, we thank them for that!