Animal Force is straight up an odd and intriguing game that mashes together a bunch of different games through 4 different game modes.  In the single-player campaign, you must gather animals and defend the Earth from waves of attacking aliens bent on earth’s destruction.  Should you wish to play locally with friends, the other 3 modes mix up the action in ways you wouldn’t expect making this a family friendly experience for up to 4 people. 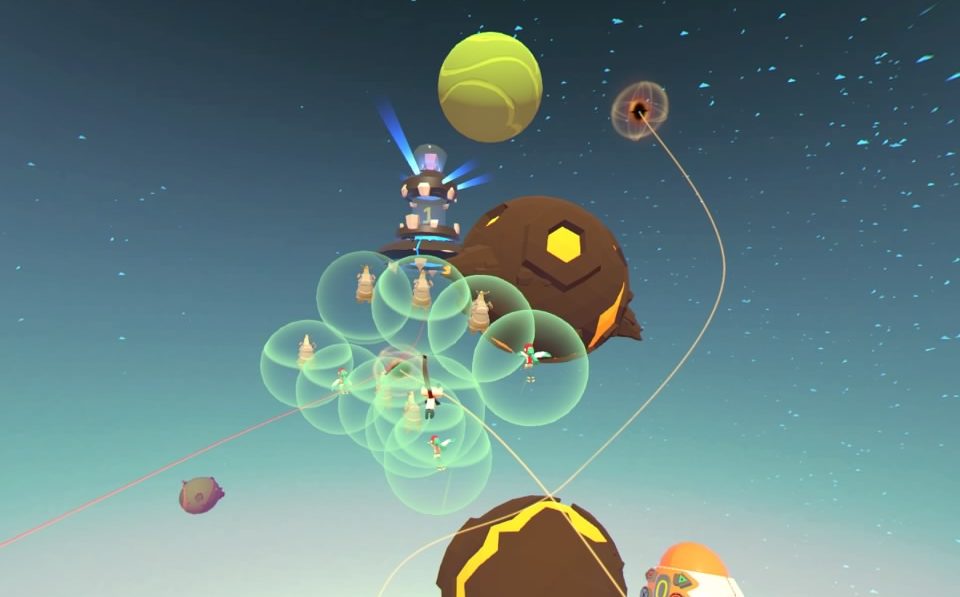 Line em up and take em down!

The main campaign plays like a mix of Tower Defence and a sort of wave shooter as you are tasked with stopping aliens travelling on a set path in the sky from reaching the earth and abducting the humans.  Using only 1 move controller you control a spaceship that flies around the Earth to get the next level where the aliens attack.  Once in a stage, your controller acts as a sort of handle allowing you to catch and place animals along the alien’s path, stopping them from getting to the ground below.  As you collect animals they form a sort of whip that can be placed along a path, once placed you can try and move them around individually or grab up to 5 and place them in a new position.  Each of the animals unlocked through the 28-stage campaign has their own different ability so while the Panda is just good for shooting stuff, a properly placed Rhino can slow down enemies or a bird can protect your own troops from attacks by creating a shield around your forces.  As the levels advances and enemies are destroyed, more animals and stars fly toward the screen requiring you to collect them for more defence units or just points.  There are 12 animals in total that you unlock throughout the campaign and should you wish to revisit a previous stage to collect more stars, you can at any time, but you can only choose 3 animal types for any level, so strategy does play a part in who you pick. 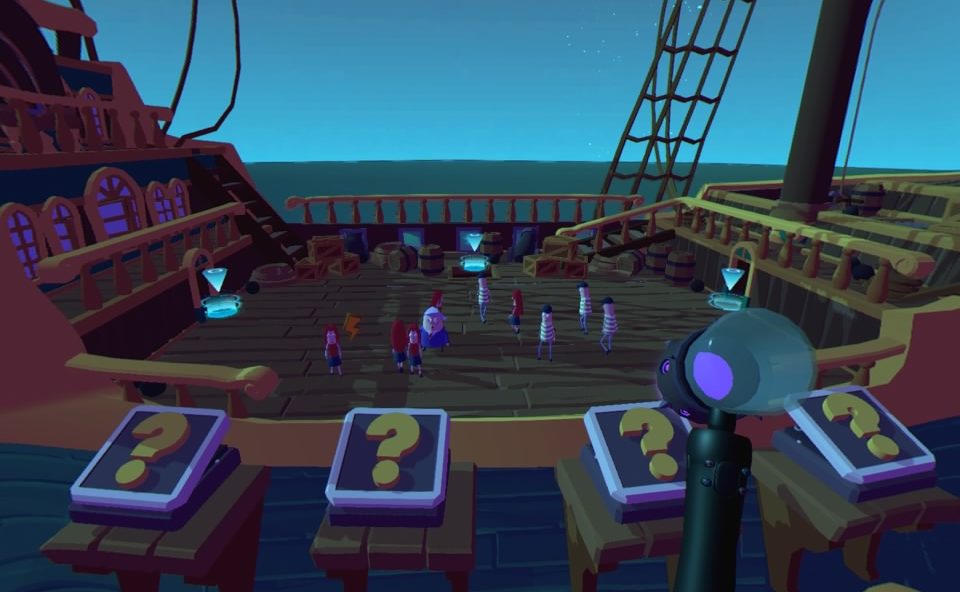 The local vs games are all entertaining!

Besides the main campaign are 3 local co-op games as well that don’t play anything like the single player game.  The 1st is ‘Steal the Statue’ which is a 1 vs 3 game where the VR player overlooks a small area while the non-VR player has to push a statue through an exit.  In this mode the VR player is a head tracked gun stuck at a fixed vantage point while the non-VR player has a top-down view of the entire map.  ‘Odd One Out’ has the VR player facing up to 3 non-VR players in this find-em game where the play area is littered with very cartoonish characters.  It’s up the VR player to find the human players who must move around the map and mimic AI movements when prompted.  If the VR player captures an AI player and not a human player, he/she loses.  The final mode is ‘Divide and Conga’ which 1 vs 1 where the VR player must shoot humans out of a gun while the non-VR player has to run around the map as one of the Animal Force characters and collect human who follow that player in an ever-growing line.  If the Player can fire humans at the conga line and make 3 of the same sprites in a row, those 3 humans are eliminated.  Scattered around the level are boosts and boons for both player that can disrupt eithers game. All of these are surprisingly fun and while they play nothing like the campaign mode, are a very solid addition and great to pull out at your next gathering.

The cartoonish visuals look pretty good though nothing here really is mind-blowing.  Character models are very simple and lack detail, but the color palette used and the general design makes for a clean looking game.  As the campaign takes place in the skies above the earth, there really isn’t much to look at until you look down.  Everything from the environment to the characters are exaggerated and stylized so everything fits the common theme of being very light-hearted, which belies just how hard this game can get.  All the characters and enemies make singular noises as they pop into the game or die.  Humans who are abducted make little yells and the game is peppered with some friendly music that is instantly forgettable, but inoffensive. 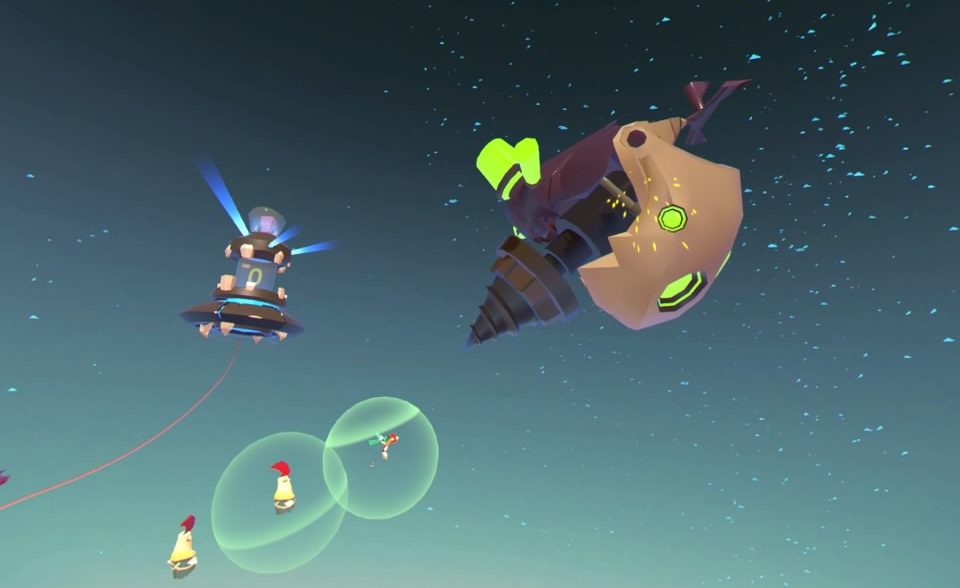 The boss battles are freaking HARD!!!!

The first few missions are a breeze and I began to worry that the difficulty offered here would just be too simple to capture the attention of more ‘hardcore’ gamers.  Suffice to say it only takes a few missions before the challenge ramps up and you’ll go from just setting your animals in one place and watching them win to having to babysit and carry as many animals as you can as more and more portals open up with alien troops swarming out of them.  As you unlock more animal with more abilities, so too does the alien horde keeping you constantly on your toes.  Every 4 stages offers up a boss stage which become unrelenting, though thankfully there is an upgrade system in place.  Collecting those stars isn’t just for points and can actually be spent on increasing each character’s ability and should run into too much trouble, replaying any beaten level will yield you stars ensuring that progressing through the campaign won’t be dependant solely upon your skills.  It’s a balanced system that rewards skill but accommodates those who may lack it and no matter which side of that spectrum you land on, you always feel like your advancing in one way or another.

I did run into a few tracking issues as the game maximizes the PSVR tracking space but doesn’t have the best positional reset option meaning if you move in real life, the game may not adjust for that shift bringing you to close or to far away from the action.  Secondly, while I did laud the way the game constantly makes you feel like you are progressing, world 3 and on get ridiculously hard and may still frustrate those who are forced to grind for stars to get those necessary upgrades.  Still, overall the game runs really well and I was impressed by the use of the full tracking area that the PSVR is capable of. 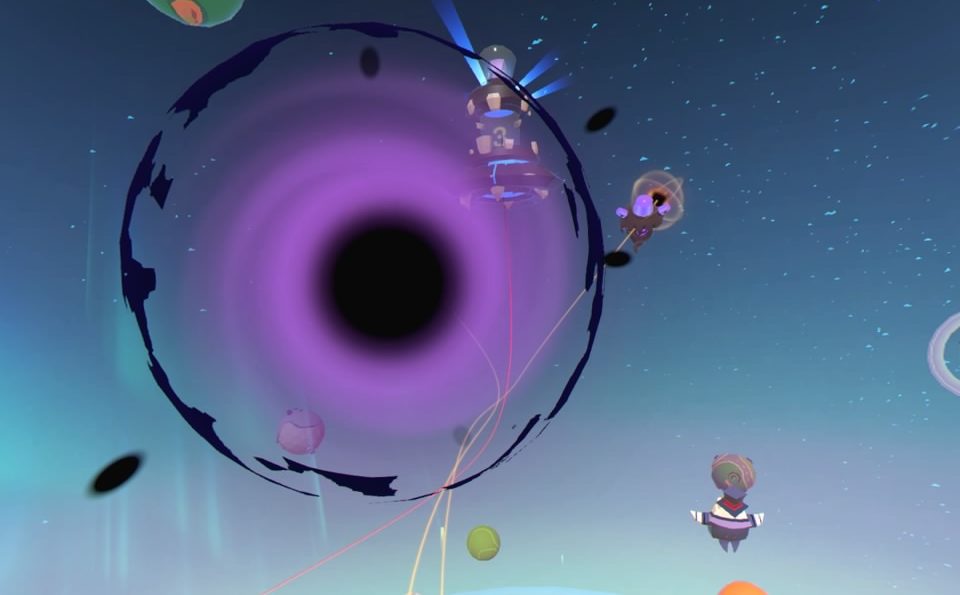 When the environmental variables show up, the challenge increases dramatically.

Animal Force surprised me as being a very solid Tower defence game that uses VR to make a game-type I don’t think I have ever played before.   The single player campaign will take more than a few hours to conquer and the levels are so short that should you fail, it’s easy enough to try another round with a different line-up of units.  The local co-op modes offer some quick fun and with 3 non-VR players allowed you can easily switch off and play with a large group of friends.  Animal Force contains a fair bit of value and for fans of the Tower Defence genre, this is a unique VR twist on that genre that works great!

What would I pay? $20 is a decent value for what is offered here provided you dig Tower Defence games and maybe have a few friends to spread the love with.

Oasis Games provided The VR Grid with a review code for this title and, regardless of this review, we thank them for that!