As the PS4 enters its twilight years, so too does it seem like PSVR headsets are soon to follow as the technology backing that HMD is really, REALLY showing its age.  With that said, some of the best and most impressive games come at the end of a console generation as developers figure out how to maximize the technology to deliver games that seemed nearly impossible to create only a few years ago.  Enter Hitman 3, the final installment in the reboot of this hallowed franchise that not only offer the entirety of the campaign in VR, but thanks to Hitman’s import function, let’s you play as Agent 47 through the entire series, assuming you had purchased the previews entries in the franchise (more on that in a bit).  This game is available outside of VR but for the purposes of this review, I’ll be covering the VR version exclusively. 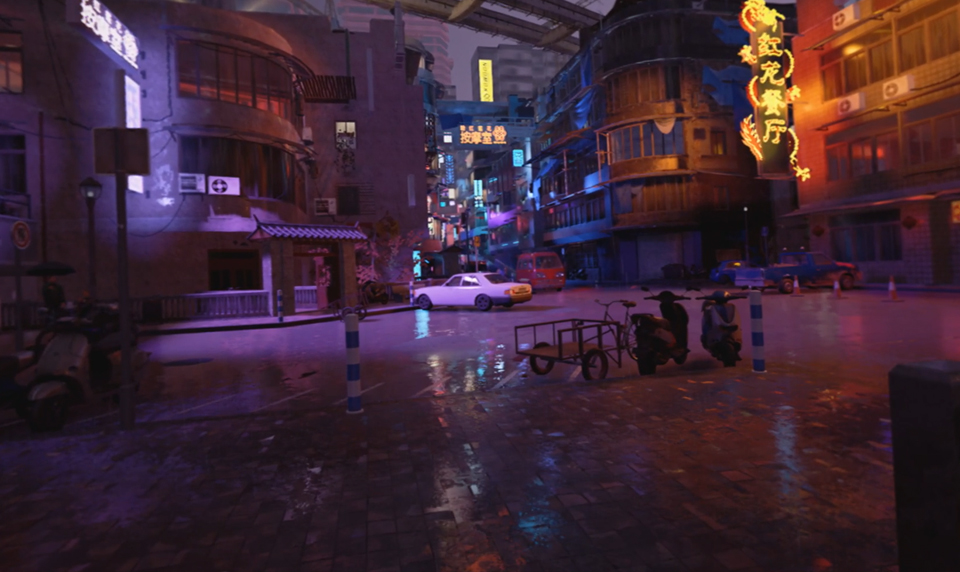 Almost everything in this game is gorgeous and impressive!

The dual shock 4 is your only control option with this controlling similar to VR and Non-VR FPS titles though thanks to the tracking bar on the controller, allows you to interact with the world around you the way VR was meant too.  Unfortunately, the DS4 is not the best tracked controller out there as it needs to stay pointed at the PSVR camera as tilting it to far away from the cameras sight can cause you to lose tracking.  Comfort options are available allowing for full locomotion or more restrictive VR use thanks to blinders and click-turn option with one notable omission being the option to toggle the guardian system on or off.  It’s nothing short of intrusive as triggering that system overlays a grid displaying the camera and it’s trackable area but that area is so small that any motion beyond a few inches from my chest caused that grid to fade in and out of existence as I adjusted my position.  Having only one tracked hand is also a little awkward at times as the DS4 was never really designed to be used in this manner and while you can toggle how your off-hand behaves, you only have control over your right hand.  The thumb sticks allow for smooth navigation throughout the 6-stage campaign with many actions relegated to button presses to perform.  Throwing an object is handled by having said object in your hand, then you use both Right and Left triggers to aim then toss it.  Much of the items you can grab and interact with are handled by pressing a button while looking at it with context sensitive prompts popping up depending on what you are looking at.  Pressing R1 to pick up a weapon or triangle to stuff a body in a closet may seem counter intuitive to what you might think you want to do in VR, but in truth it allows the game to play quite smoothly as fumbling to do these, and many more of the actions required when seconds count between being stealthy or being caught would ruin how this game was designed to be played.  There is still plenty of VR goodness in here as sneaking up an unsuspecting victim and raising your hand to their neck will allow you to choke your victims unconscious or you can physically tap them on the shoulder to get their attention.  Fiber wire can be used by placing the wire around your victims’ neck and yanking back with gunplay behaving exactly as you would expect with button presses used to reload.  It’s a hybrid VR/Non-VR system that works alright but I can’t help but wish that Sony just had better VR controller options to accommodate these more complex games. 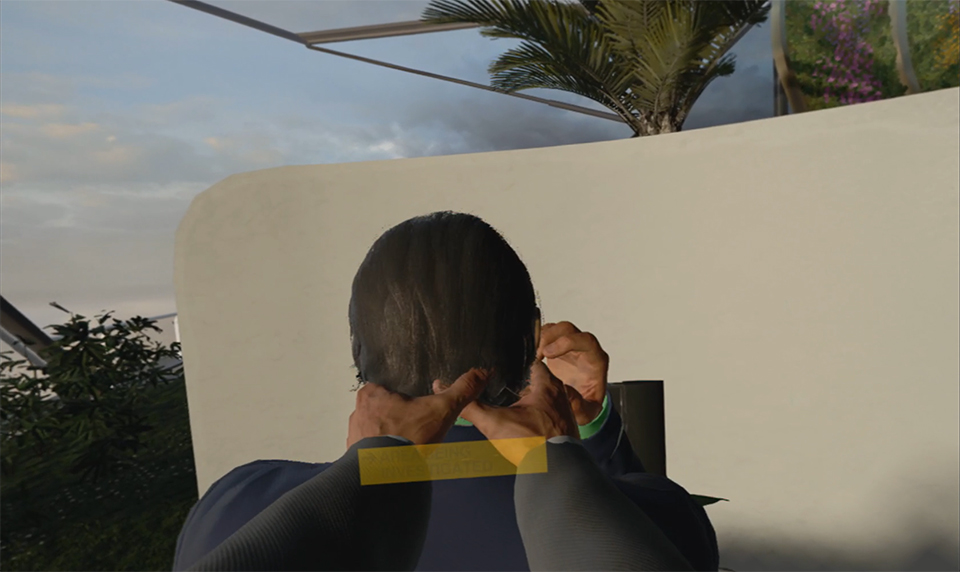 Strangling people from behind will be a go to move throughout your play.

For those unfamiliar with the franchise, much like myself, you control Agent 47 through a variety of impressive and sometimes comedic scenarios.  47 is a master of disguise with each mission tasking you to assassinate someone by whatever means you can.  Each stage is its own contained sandbox that allows you infinite freedom when it comes to finishing your task.  Assuming outfits of the people around you (security guards, mechanics, cleaning staff…) can get you past many obstacles but you need to be careful as some NPC’s can still identify you as being a stranger in disguise and committing any crimes or disturbances could alert those around you that you are up to no good.  As you play through each stage, the plot thickens as new obstacles get in your way.  Assuming specific identities could unlock entirely new narrative paths and options, making each playthrough unique as you can navigate that level in all new ways. This sandbox effect is further amplified by unlockable items and options that let you start stages from new areas with additional starting advantages like lockpicks and other weapons further customizing how you tackle each level.  Outright violence is never the wisest course of action as it is very easy for NPC’s to overwhelm 47 in a firefight so stealth is key.  Scattered around each stage are numerous opportunities to dispatch your targets so should one not be a viable option, patience and exploration will typically reveal another. In one instance I could poison my victim, lure her to her chambers for a silent kill, assume the role of an Undertaker to get closer to her and those were just the options I found on my 1st go.  What’s funny is that despite all the options at my disposal, I had triggered events that led to another NPC killing her before I could and it’s that “random” dynamic that makes this game, and this series, so damned addicting. 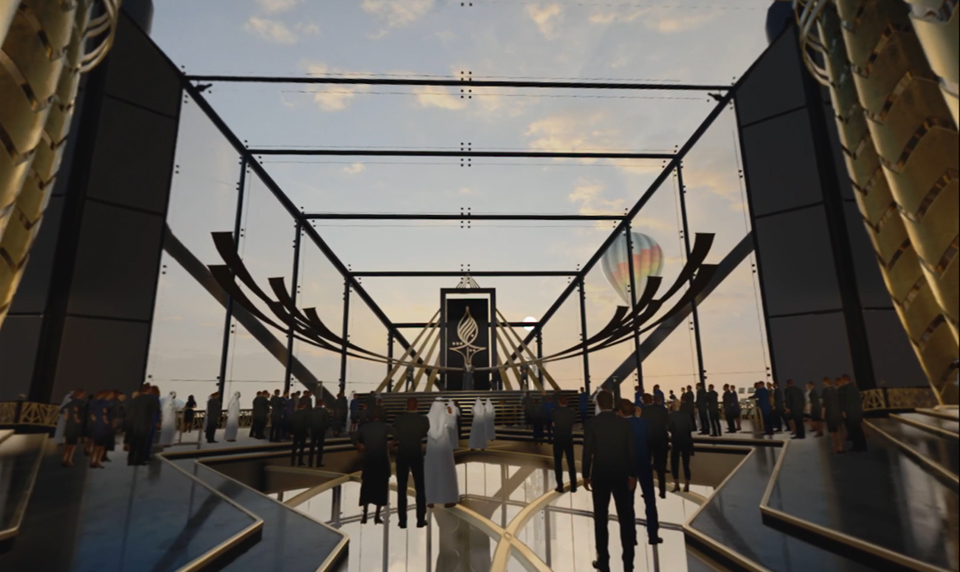 There are plenty on stunning set pieces…just ignore the pop in.

Hitman 3 is stunning in its VR translation as I have never seen such a massive non-VR tittle ported to VR so thoroughly.  Stage draw distance is impressive as are the differences between each stage.  The clarity in the overall presentation makes this arguably one of the best-looking VR games I have ever seen.  NPC models come in a huge variety with many of them having actual character and storyline and up close in VR look fantastic.  No 2 stages are alike so whether you are on a docked ship having a massive party, city streets bustling with people or a large mansion, each one offers up all new problems to solve.  The attention to detail in every stage is unrivaled giving a fantastic sense of immersion as each scenario looks and feels fully realized.  That isn’t fully the case you can’t really interact with anything in environment beyond items usable in assassinations making things feel much more static than they appear at 1st glance.  Another larger issue is the amount of pop-in the shows up, especially in the larger stages loaded with people where many will just appear right before your eyes.  Just turning your head too fast will yield a similar effect which can be jarring to say the least.  That pop-in is not relegated to NPC’s as many objects in your surroundings will just show up, sometimes when they are only meters in front of you.  This sacrifice is understandable given just how much can be happening at any given time and how underpowered the PS4 is by today’s standards, but it can still ruin immersion, especially in the more open stages. Another omission for VR users is that the cut scenes and scoped rifles are not in VR but appear in cinematic mode only which is disappointing, but not a huge deal. Those issues aside, the detail and quality in the presentation is still mesmerizing with every object from wine glasses, to flora and fauna all looking AAA and thus raises the bar for what VR games can look like on the PSVR.

While there were visual sacrifices made to get this to run in VR, as far as I can tell, that’s not the case for the audio. This has some wonderful 3D audio as well as a fully realized soundtrack and an fully voiced and cinematic campaign.  In fact, I would go so far as to say it’s near flawless in this department save for when there are just so many conversations and ambient noise around you that you can actually miss key plot revelations and mission objectives.  Thankfully, there is a mission log that keeps track of all the key events you have encountered, but it can be a little annoying when you miss those conversations through no fault of your own. 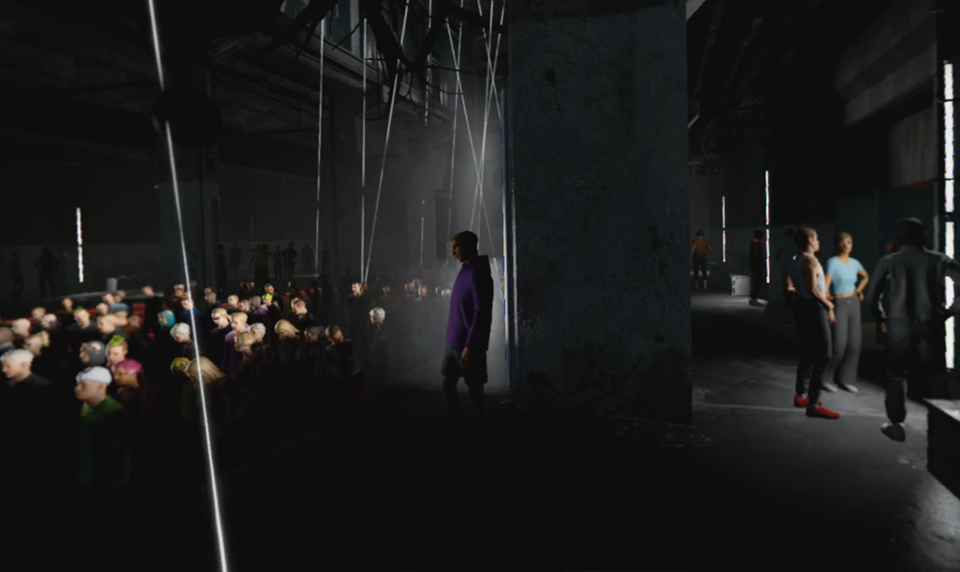 When you get to this stage, try and find the DJ…it’s worth it!

There is a lot of give and take when it comes to the VR version of Hitman 3 but I will make it clear that despite my issues, I am very impressed with the final product as it stands at launch.  It can take time to get used to the control scheme, but it feels natural soon enough and it becomes easier to skirt the games VR shortcomings.  When playing in VR, the autosave feature has been disabled so it’s up to you to save your progress manually which took me some time to get used too.  The problem here lies that if you die or fail a mission, you’ll have to reload a previous save or restart the mission so if you have forgotten to save for last 40 minutes of play, you’re screwed and will have to replay the section of the game all over again.  A wonderful feature of the Hitman series is the import function that lets you load stages from the previous games allowing you to play them all without having to hop from game to game.  This is exceptional as, if you have the 1st 2 entries in this trilogy than you can play through all their campaign and DLC stages in VR with items you unlocked in those games being accessible as start options in any mission in any of the 3 games.  You’ll have to pay to play but having access to previous games through a VR HUB is unheard of, especially given that these games are some of the highest quality we have seen for PSVR.  Accessing that content can be a little tricky as the import feature is convoluted but a quick internet search should have you on your VR feet in no time.  One minor note would be that the challenge missions in each game are not VR compatible and can only be played in cinematic mode. 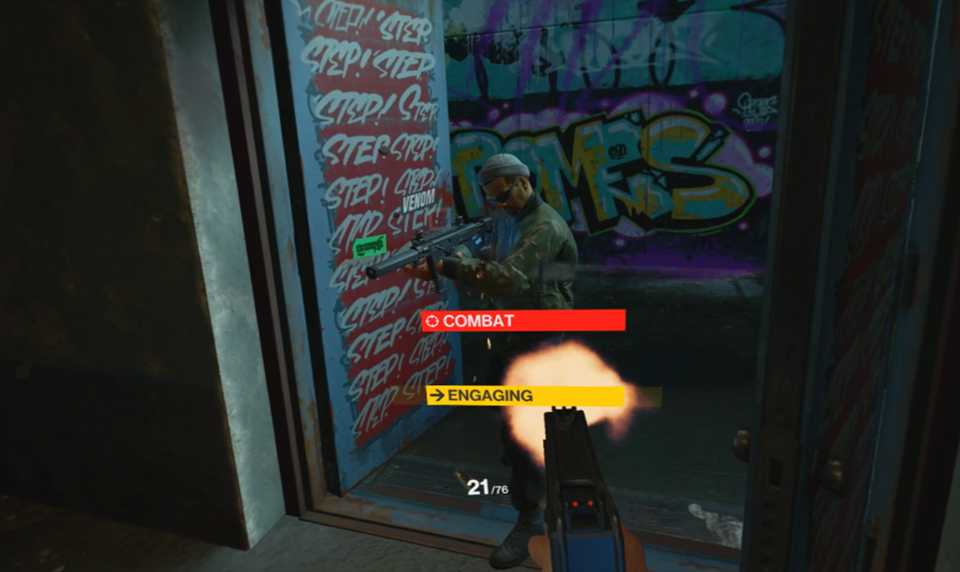 When all else fails, it’s time for the big guns!

Hitman 3 is a tour de force when it comes to VR and shows that there is still life left in Sony’s aging headset.  It takes a few missteps, but I’m hopeful the developer listens to consumer feedback and patch in a few fixes to clean things up a bit (GET RID OF THE GUARDIAN SYSTEM!!!).  Some issues do hamper the gameplay but the shear amount of stuff to do and the insanely high replay value makes every playthrough a unique experience…as long as you are willing to experiment.  Hitman 3 is a prime example of the types of games we have been asking for in VR for almost 5 years and delivers a AAA experience unlike anything else we have seen in any headset before!

What would I pay? This is a full priced $60 US and worth it despite its flaws.  I’ve enjoyed this 3rd part to the series so much that I can’t wait to dive into the 1st 2 games in VR and see the origins of this trilogy.  The sandbox nature of the game always has something new to offer you and even just messing around just see what might happen is loads of fun…just don’t forget to save your game every so often.