If you have ever wanted to be a cat running around your house knocking stuff over than this is for you.  This game was released a while ago in non VR format and has since been upgraded to VR in time for PlayStation’s VR launch.  This may be the first game I’ve played that doesn’t really benefit from VR and may actually be hindered by it. 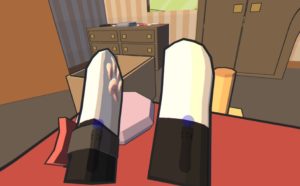 If I were to say only one thing about this game I would say…”You are a cat!”

The rules of this game are simple.  Knock over as much stuff as you can in the time allotted, unless you do litterbox mode, which has no time restrictions.  Upon starting the game there is no VR option readily available and it only appears after you finish the tutorial.  For myself I didn’t see the option until after I failed the 1st level.  You will need 2 Move controllers to play this in VR as each controller becomes a paw for you to swat things around.

In non VR mode, which you are forced to play, the game controls like any modern shooter with the trigger button using your left and right paws to know stuff over.  In VR with your hands now acting as paws your movement is now limited to the ‘look where you want to teleport’ and move there.  Once in a spot you swat away at the items immediately close to you.  The teleportation mechanic doesn’t work that well as the game seems to want to limit where you jump forcing you to find that sweet spot that changes your movement reticle from red to green.  It can be annoying and frustrating.

Speed, as a result of VR, has also been neutered.  While it may be fun to sprint around the house (or other unlockable areas) as fast as you can in non-VR, the VR teleportation mechanic slows this game down to a crawl and that’s even when the controls are working perfectly.  Mixing up all this “action” are power ups and some random(?) events that change the physics of your environment or your physical attributes (speed, power etc.).  These nice little additions to the game mix up gameplay a bit, but not enough to make any real difference.  There are also collectables to be picked up as well to add to the challenge.

The visuals here are very simplistic with everything being cell shaded with not a lot of detail.  I found that the cats just didn’t look right, specifically their gremlin-like faces, but thankfully you don’t see them a whole bunch.  Nothing breaks or is really that interactive besides being able to knock them over.  The art style works, but it’s not that pretty and lacks any real substance. 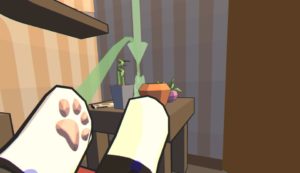 Making that reticle green can be a pain in the @$$!

Audio as well is nothing to cheer about with same looping, annoying tracks accompanying every second of your mischief.  A dedicated button for cat noises is here as well so that’s…cool? I dunno.

Ultimately, this is a cat simulator and it may be fun to mess around in this for a tiny bit, but I think for most people this will wear out it’s welcome sooner than later.  For those people who are insane about cats than this is probably right up your alley…because you are crazy.

What would I pay? $2US.  This really is for crazy cat people who really love cat puns (this game is loaded with them).  It’s a shallow experience that, with or without VR won’t keep your interest very long.