So with seemingly endless amounts of Zombie survival games available across all of our beloved headsets, it can be hard to for them to stand out as for every Walking Dead: Saints & Sinners or Arizona Sunshine we get a host more of mediocre and terrible undead titles like Contagion or Dead Land.  Throw Anything has actually been available on the PC side of things since 2018 but now sees it’s release for the PSVR headset and looks to inject a fair bit of comedy and hectic action as the dead slowly climb toward you while you literally throw just about anything you can to kill them and knock them off the side of the building you are in. 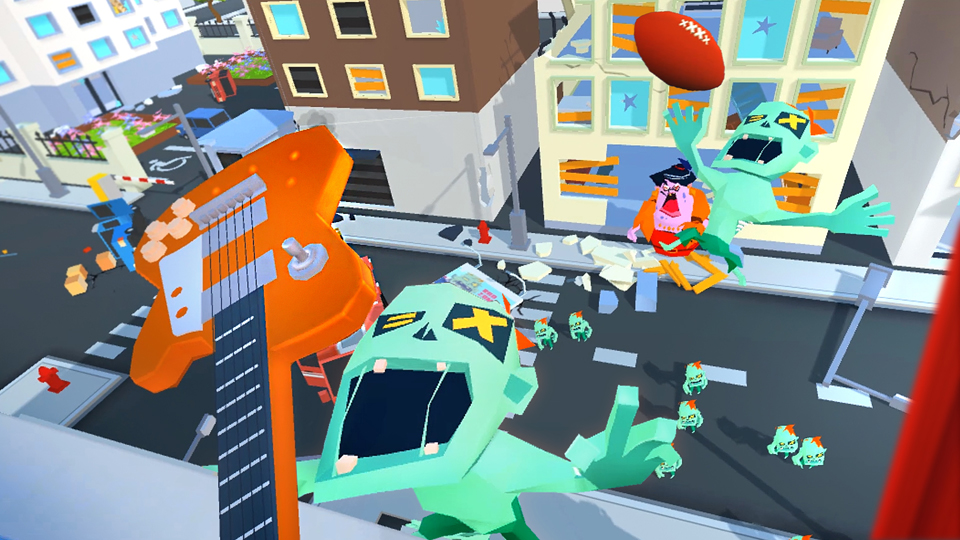 Stop the horde by any means necessary!

A tutorial takes you through a bulk of the games base mechanics with you looking over the edge of building while the horde slowly scales the building to get to you.  Behind you will be a room littered with all kinds of junk and it’s up to you to toss that junk at the zombies by using telekinesis to grab them and tossing them and if it’s not clear by everything I’ve mentioned so far, it’s a Move controller only affair.  It’s a little more then hurling stuff as some of that junk is too big to toss, requiring you to break it into smaller pieces which can then be thrown.  Melee weapons will pop up or can be bought in the main menu and delivered to you during the next stage you play after the purchase with those items typically being of more use then what’s scattered around as they include weapons like a barb wire bat, handguns, machine guns, bazookas and a host more items that could turn the tide during the more intense moments.  Beyond just tossing stuff during the 6-stage campaign is the mission to collect pieces of a device (1 per stage) that can be assembled to unlock the final stage though these are hidden in each level and require a little extra work to uncover them.  Some items provide more then just a gravity affected weight and produce additional weapons and items with some components scattered around each stage that can be combined to create more powerful, and fun, weapons.  Each stage, of course, has a boss battle at the end and should you struggle or find the game to easy, you can choose easy, medium or difficult settings.  Additionally, there is a small shooting gallery and sandbox room that let you use all the games weapons or just mess around. 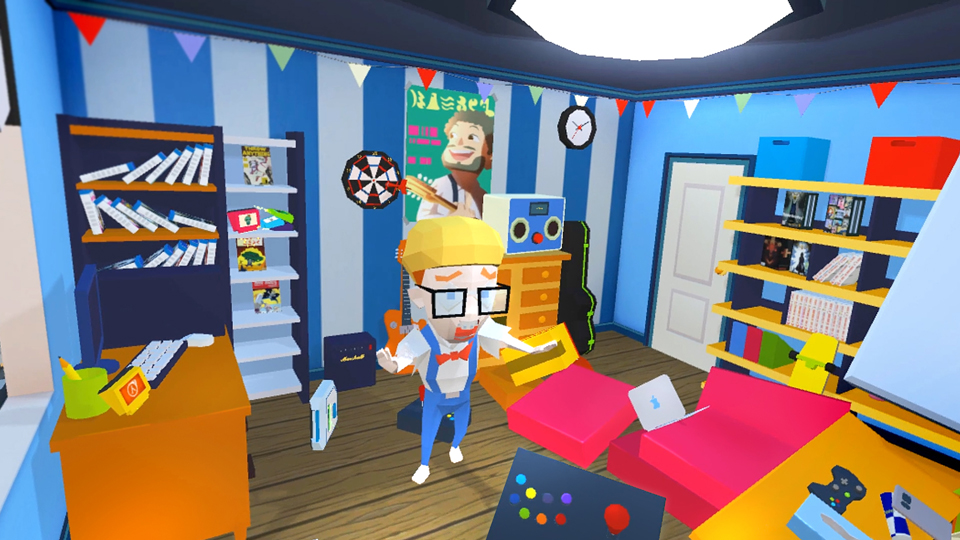 If you can see it, you can toss it!

Throw Anything is not the most impressive game you’ll see in the headset, opting for cartoonish visuals in the vein of Job Simulator.  Each stage has you looking out of a building from a variety of rooms like a bedroom, cop station or kitchen with each containing unique items befitting that setting.  Below you are the city streets and moments after you start a level the undead horde appear.   The zombies and other character models are pretty bare bones when it comes to detail and even the way they move is sort of janky but as most of them are zombies, it’s forgivable.  Each stage opens and closes with very brief still-frame cinematics that explain the story though the details here, outside of the opening cinematic, are fairly sparse.  Like I said, the visuals aren’t going to blow anyone’s minds, but come off as friendly and inviting which I’m sure is what the developers were going for.

Audio is amusing with some stages having truly epic music playing in the background which does add to the intensity oPhysicf the action when the zombies come at you in large numbers.  Items sound like they should when they break or smash apart with each stage having a character running around behind you, making annoying noises and just asking to be thrown over the edge (hint, hint).  Special shout out to the actor who voiced the chef in the 3rd stage as his scream is next level and should replace the Wilhelm scream as the new go to scream heard in games and films. 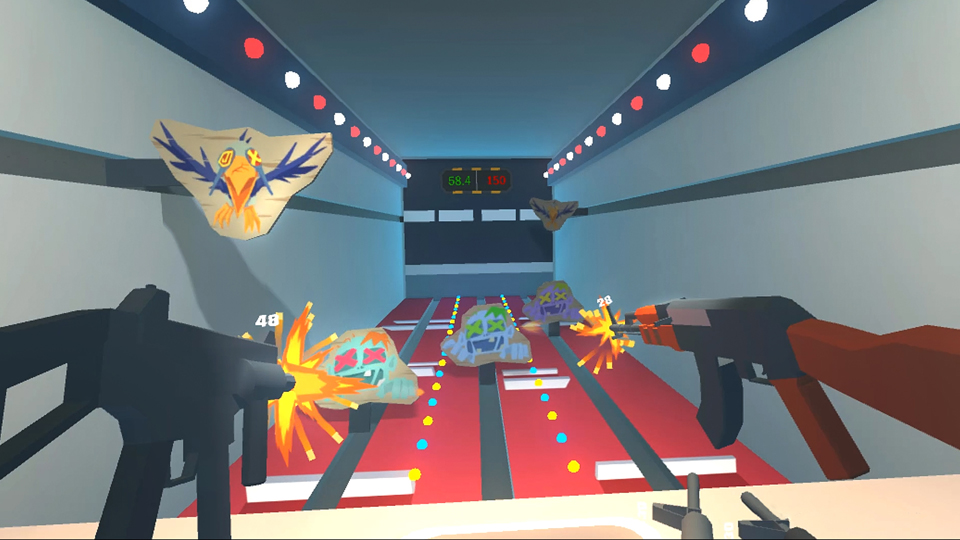 There is some bonus content in here as well!

As fun as the game can be at times, it’s not without issue, the foremost one being that there is no way to turn around save for turning around in the real world, which may be fine on the PC side of things, but on PSVR, it can be…troublesome.  With much of your “ammo” behind you, trying to grab and toss things in the opposite direction of the camera can be an absolute nightmare, especially if you are aiming for something quite small.  All this game needs to remedy this issue is a button to 180-degree turn, but as it stands now, that’s not an option and really should be fixed ASAP.  Physics are also less then perfect as throwing stuff can result in some unintended results.  As enemies crawl up the building directly below you and to the sides, and even from the air, hitting those distant foes can be tough. There is plenty of items to chuck at them, but your supplies are finite adding a small level of frustration.  By no means is the game broken and it wasn’t until the last 2-stages where I really started to struggle against the amount of undead coming my way, but when you do run into either issue I mentioned, it can be game ending depending upon your situation.  You are scored at the end of each mission with that really being the only replay factor for any stage, unless you missed 1 of the pieces needed for that final stage and once I did beat the game, I felt very little drive to return. 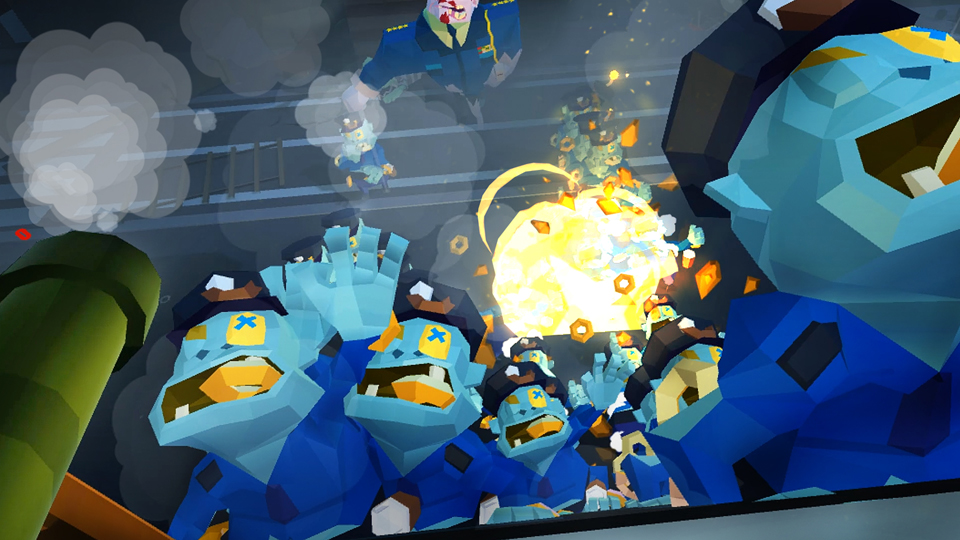 Don’t let the situation get this bad!

Throw Anything feels like a VR launch title.  The gameplay is simplistic and repetitive and if your skilled enough, the campaign shouldn’t take more then an hour and half tops.  Don’t get me wrong, it’s fun and frenetic at times and discovering each stages little Easter eggs and bonuses was a treat, it just feels slightly undercooked.  I think this may be best played with friends as you swap headsets and can see who can get the highest score in a stage but for those looking for anything with depth, this isn’t that and feels more like an extended VR demo then complete game

What would I pay?  This retails for $18.99 US and I think that’s just to high for what’s here.  I’d say for $10 this would be a guaranteed buy but as it stands now there isn’t enough content here to justify the full price and has some unnecessary frustrations.

Visual Light provided The VR Grid with a press code for this title and, regardless of this review, we thank them for that!