So, the bar has been raised yet again, in my opinion, with the Invisible Hours, which I would describe as an interactive movie unlike anything I have seen before.  When I first started messing with VR not so long ago, I imagined what experiences would be like outside of gaming and have been treated to a host interesting takes on a more cinematic medium.  While short films like Ctrl or Digital Domains Monkey King gave us nothing more than 360 narrative tales, they failed to stand out in any real way.  Other efforts like the Voltron VR experience gave us stellar visuals with some streamlined interaction to help us feel like ‘we are there’.  I’ve loved and loathed some of these efforts, the whole time wondering how the next developer would merge interaction and cinema into something truly amazing.  I’m happy to say that The Invisible Hours has set a new standard when it comes to these types experiences and is a must play for those looking to see what VR can offer us besides games. 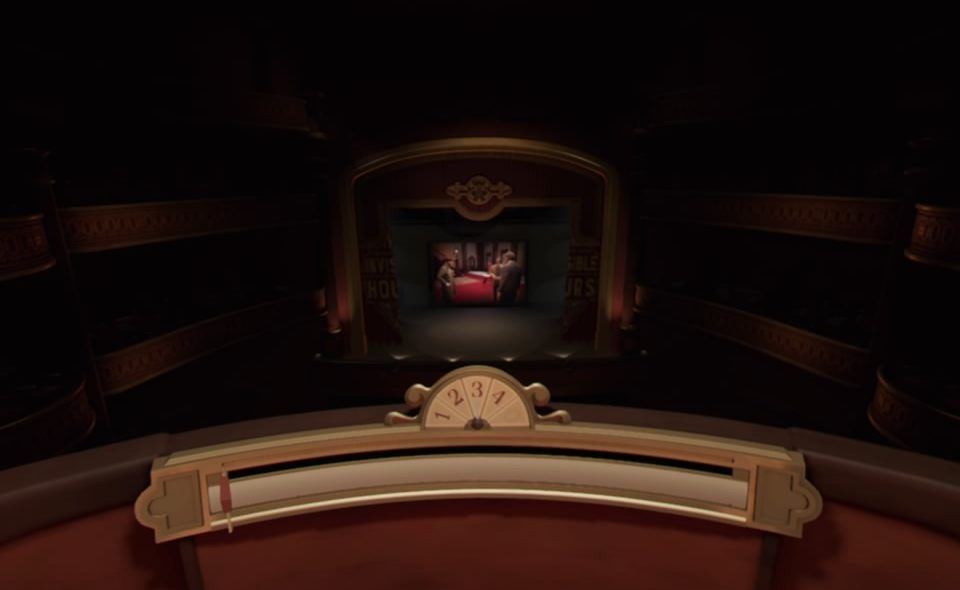 Without giving away too many plot points, the game starts you off in an old theatre where you navigate to a balcony to enjoy a film.  From here you are transported inside the movie and view the opening moments on a tiny island, highlighting the arrival of a small boat with Detective Gustav Gustav (not a typo) who was invited there by the now deceased Nicola Tesla.  From here on you can basically do whatever you want.  Now what I mean by that is that the game is a linear story broken into 4 chapters that play out like a real-time movie.  You are essentially a ghost, only able to view the events unfolding around you, but there are a few ‘gaming’ options at your disposal.

For starters, you can navigate anywhere you want on the island, minus a few plot specific areas, and check out other characters, rooms or just search for items.  Unfortunately, navigation is only handled by teleportation and click turning, or by locking on to one of the characters which takes you on a more cinematic ride.  Though it is the much-maligned teleportation mechanic at play, it does allow fast travel when you are trying to get from one side of the house to another.  You also have the ability to pause, rewind and fast forward time, allowing you to not miss a single detail should you get distracted by something nearby. I think it’s best to follow one person at a time and in my first playthrough of the story I followed Gustav.  While watching only him, I overheard other conversations happening nearby, watched as house guests disappeared out of Gustav’s sight in a panic and was given as many questions as answers after his perception of the story ended…and that’s where the beauty of this game lies. 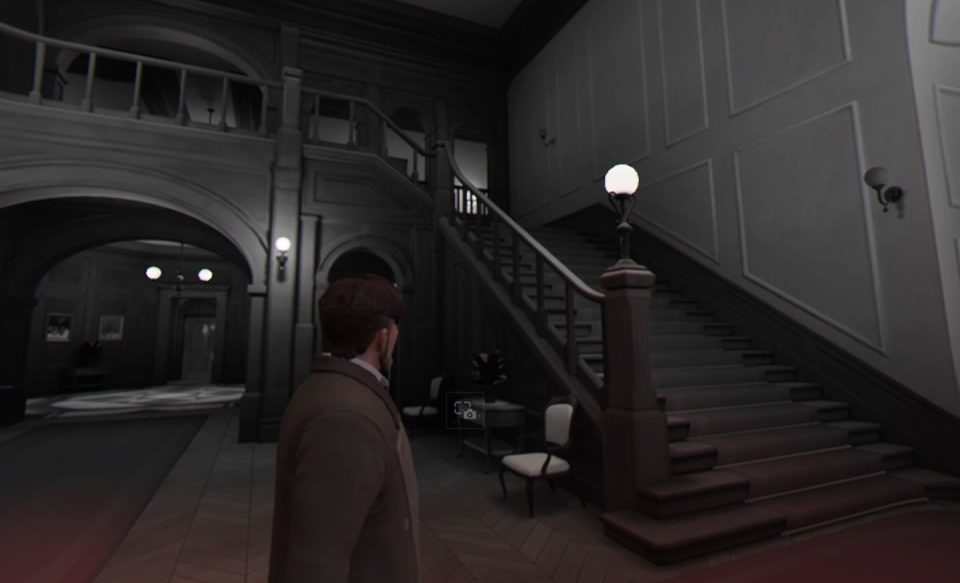 Choosing my next ‘suspect’ to follow, I was given new insight into not only that character, but other events around the household (including who the murderer was) and was still left with a flurry of questions that could only be answered by another play through.  In fact, even on my last visit through the events, having seen every interaction between every person, I was still left mouth agape at the personal reveals during that story.  It’s an impressive feat to tell a 1-hour(ish) story from several different vantage points and still have each, not only add to the overall plot, but still feel fresh.

Besides just watching the story unfold, there are a whole bunch of items to be found that offer additional information and background on the characters in the house.  Some are just pictures from the past while others are letters that tell a small portion of a suspect’s backstory.  This portion of the game is more fluff than anything else, but if you become engrossed into the story as much as I did than you’ll be eating up every piece of information you can get in gluttonous fashion.   There is one other gameplay element at play here that I can’t mention without spoiling a key plot point, but those with a keen ear and eye should be able to figure it out.  Items you find throughout the game are on display in the menu screen/theatre where you are free to navigate and view anything you have already discovered. 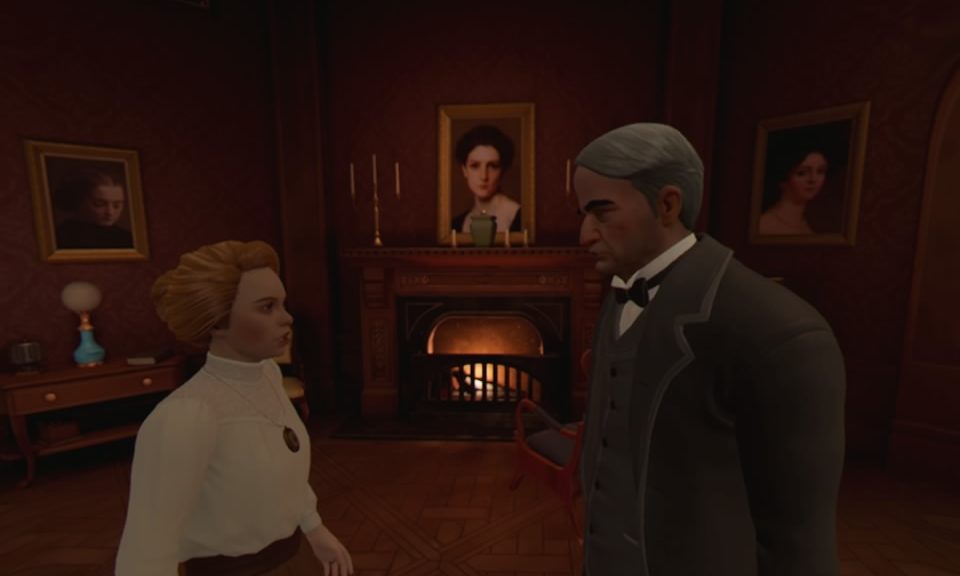 Every conversation offers insight into a characters motivations so pay attention

Unfortunately, while the story is an absolutely mind-boggling tale, the visuals don’t quite match that established quality.  It’s a mish mash of quality and technology limitations as the models used carry a high degree of detail…up close.  Pull back from any characters though and their faces and smaller details become a pixelated mess, which is just a shame as watching their reactions to the events around them is a highlight that only adds to their performance. I mean, you can still watch their reactions, but to get their full effect, you need to lean in pretty close.  The scenic details fare way better with the house seemingly being ripped right out the Resident Evil series.  It’s an old mansion, with a few secrets, that feels lived in by one of history’s most famous scientists.  The house is littered with real world objects and smaller details that just make everything look and feel natural.  You can go into the house, walk around  the courtyard outside, or grab a tonne of items and take a closer look at them.  While distant items definitely take a visual hit, most of the action you view will be a lot closer anyways so it’s not the biggest issue and could be remedied for some of us by implementing PS4 Pro support.

The audio here is next to flawless.  The actors do an amazing job at making each character seem as if they were taken directly from the time period.  Some scenes are rife with tense emotion and the delivery had me listening to every word spoken.  If any of these performances faltered it could have ruined that suspects involvement in the game and thankfully that isn’t the case minus one odd misstep.  One of the characters reveals his (or her) more duplicitous nature and changes up the way (s)he speaks which would be fine, but the randomness in the tone changes just came off as amateurish and thankfully only happened a few times, but given the level of audio polish here, that error stood out.  The music is also top notch and while many scenes lack music as the focus is on conversation, when it kicks in, it only adds to the scene unfolding. 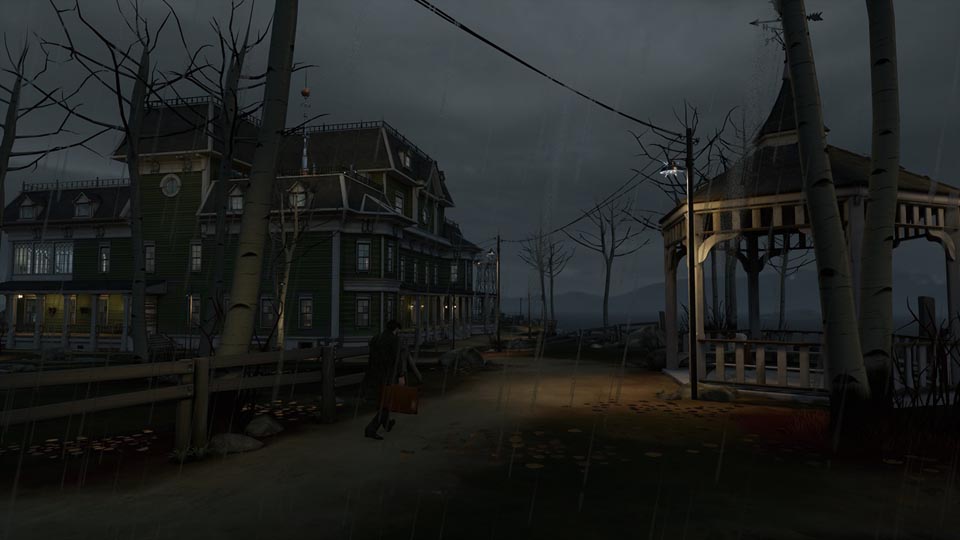 I seriously recommend just following Gustav for your 1st playthrough

I honestly want to talk so much more about this, but can’t due to my own policy on spoiling any story content.  This is not a game in any traditional sense, but rather the first major step in making virtual experiences more immersive.  The time mechanics had me feeling like a visitor from the future sent back to unravel the mystery surrounding this crazy murder.  Fast forwarding through scenes you have seen before helps streamline multiple playthroughs and the ability to rewind when you think you have missed something important is just as cool.  Add in immersive elements like being able to pick up many in-game objects and you can see how a game like this, in VR’s future, will be even more immersive.  I was so surprised at how much I enjoyed this, so much so that I have made it my mission to get the platinum in this game just to know for certain that I have experienced all The Invisible Hours has to offer.

What would I pay? $30 is a totally fair price for this.  I’ll say it one more time, this is not a game.  This is an interactive murder mystery that plays like a movie that you can travel around and control time in.  The plot and characters are both eccentric and intriguing and I could play through hundreds of these types of experiences (of this quality) and never get bored.  This is the kind of innovation that makes virtual reality so amazing!