I need to get this out of the way, I am not the biggest sports guy.  By no means do I hate sports and, in truth, a few of my favourite VR titles have been sports related like Thrill of the Fight or Racket Fury as I really enjoy the simulation aspect that VR can bring to gaming, something that playing on a TV just can’t do.  So, when I heard that the NFL was finally dipping their toe into VR, I was excited, but also leery as we have seen poor efforts from both the MLBA & NBA when it comes to bringing their respective sports to our headsets. 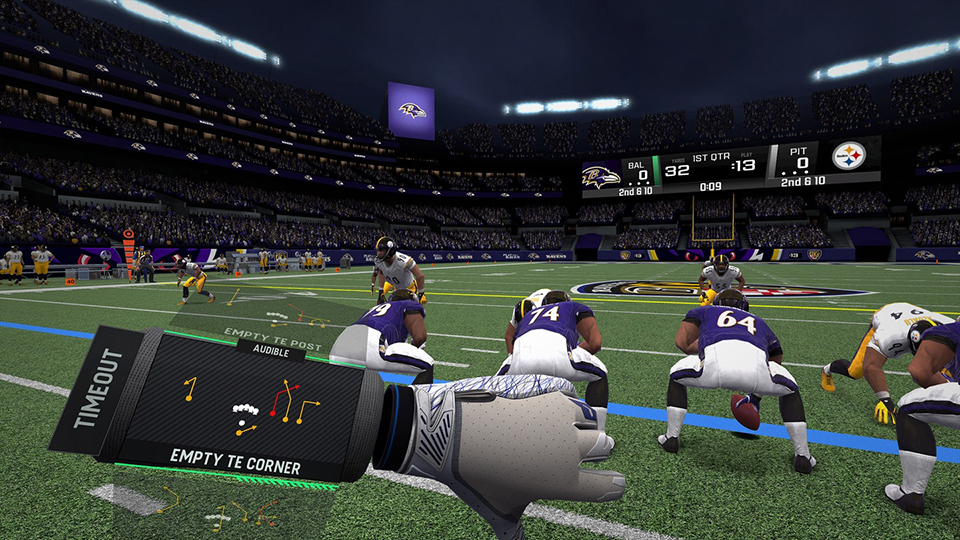 Make sure you know where your players are running.

For those looking for the VR Madden experience, best temper those expectations as what’s is here is basically a Quarterback sim utilizing the NFL license with full team rosters and arenas for every team in the league.  There is no story or any sort of campaign to worry about with the game immediately putting you into the final play of a game before placing you in the tutorial to teach you the basics.  Your coach will pick the next play which can be viewed on your arm via a small tablet and a button press later, you’ll be in position, pressing the trigger to have the ball hiked to you and following through with the play.  To make a successful pass, you need to look at your target and toss with the game auto aiming your throws to ensure success.  It’s a system that works but did take me some mental adjustment as it’s less about throwing the ball with any sort of accuracy and heft (see 2MD: VR Football) and more about timing and making sure you are looking where you want the ball to go.  Running is handled by using the thumbsticks or swinging your arms and can also be a little awkward at first, but once I figured it out it became easy enough though I should mention, the only available in-game turn option is a 45 degree click turn so for any sort of accuracy, make sure you can turn in the real world if you decide to run the ball. While it did take me a little while to adapt my throwing & running skills, once I did, completing plays, making downs, and scoring touchdowns became a relative breeze as I cruised my way to the Super Bowl. 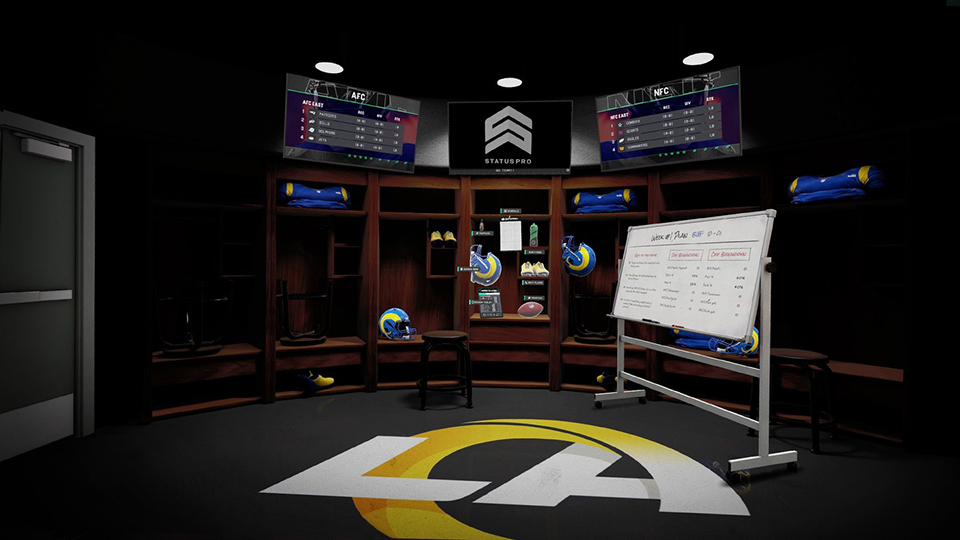 Your locker room has everything you need.

At the games onset you can choose the team you want to play for as well as customize your player with a few pre-set body types & faces and some finer tuning for wristband colours and the like though these options are fairly basic, but you can play as a male or female character for those that care.  It’s from here, your locker room hub, where you can select the next game, mess with a few basic options, view trophies/achievements in your very own trophy room or select single player mini camp tours, exhibition, 2 Minute Drills & multiplayer mini games. The camp tours are basic, offering up a mix of throwing challenges designed to fine tune your timing & accuracy across 4 different modes with the multiplayer stuff also being fairly throwaway thanks to a 4 player dodge ball, target practice & a giant mode that pits 3 players on the field vs 1 giant who must throw huge footballs at the team of 3 and take them out while the team does the same.  It all works and the games are harmless enough with some offering more challenge than others, but I really just found them to be more distraction than anything else, offering a few minutes of entertainment before I moved on with little desire to return.  That left me with the season mode which I think, depending upon who you are will make you extremely happy as you can play as the QB for your favourite team, but if you are looking for any more depth than that, it’s not really here. There are no trades to speak of or injuries to deal with, with each game ending in a win, loss or tie before you move on to the next team scheduled in the season.  When not on the offence, you sit on the sidelines and can watch the game unfold in real-time or you can simulate the game until you have possession once more.  There are moments when you can call an audible on the field and change the play and choosing to run the ball myself was always amusing and if you want you can check out all season stats in the locker room or the game stats when waiting on the sidelines.   It’s not bad and everything, for the most part, works as it should, but after about 4 season games, skipping past the game when I wasn’t involved in the play, I was bored as every play felt identical to the last.  Get the ball, pass it to whomever, let the play unfold, repeat, win the game and do it all over again. 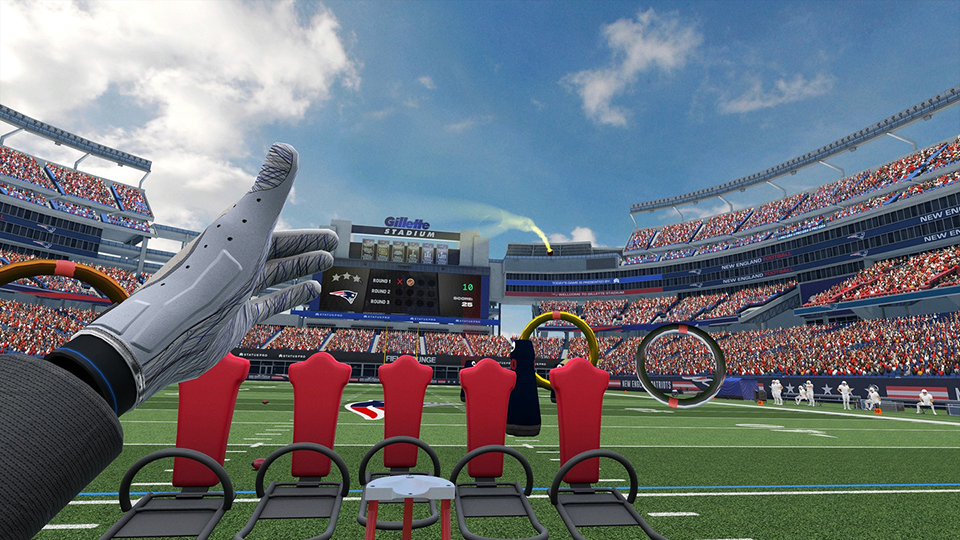 The mini-games offer various challenges to test your skills.

On the flip side to that indifference is a presentation that is surprisingly good for the Quest 2 but still underwhelming when it comes to sports simulation.  As far as I know, the arenas here are proper representations of their real-world counterparts offering some boring stock arenas while other may have huge decorations for the team and location.  The stadiums are also packed full of people and while they are little more than 2D blobs, it works.  The players on the field look…ok, though most of them have the same face and only use a few body types so many look like larger or smaller clones of each other, but they animate well enough holding each other up, tackling and everything else with decent motion capture done to make even watching the game from sidelines enjoyable.  There are some immersion breaking moments, and even just funny ones, like when all the players move using the exact same animation, all running at the exact same time or when players randomly run out of bounds and keep running as if being chased.  Less amusing moments occur when the opposing teams AI flounders, with them running away from you or past you while your holding the ball looking for a clear shot and if they do sack you, it’s little more then the screen going red and your movement stopping. There are jumbotrons in each arena that show a close up of the action and even though they run at like 10 fps or less, I still appreciated their presence (minus the fact it would not display the crowds) making for an overall fairly decent visual package and solid use of the license considering the stand-alone platform. 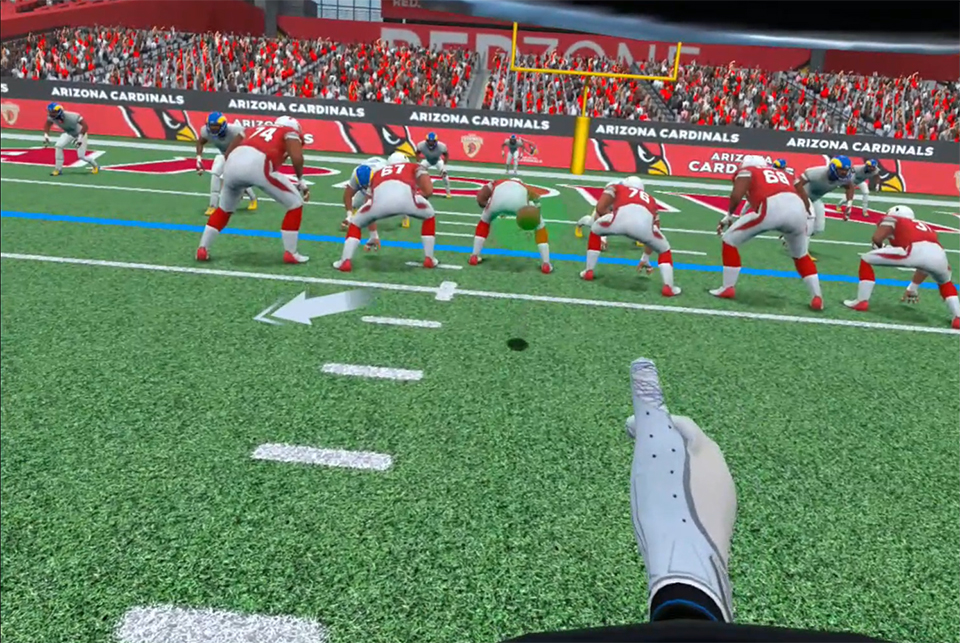 As far as audio goes, it’s a bit of a mixed bag depending on your tastes with the locker room playing a few hip-hop tracks that I suppose fit the game…I dunno, they are really to my liking.  Your coach, whom I assume is voiced by an ex-player, will audibly give you the plays and shows up during the opening sections to breakdown your various options.  During games he’ll offer support and may try to inspire confidence though what he says is somewhat limited and you’ll here the same sound bites over and over.  There is also an announcer during the games who will state the basics of each play like “pass incomplete” or “1st down” which helped add to the whole simulation side of things and while it is fairly basic, all the sound stuff gets the job done.

As I said, I’m not an NFL fan, so fan service wasn’t really what I was looking for here and, outside of all the arenas, jerseys and players is a light football sim and a fairly stock Quarterback one.  If that’s all you want is to play as the QB on your favourite pro team, you’ll probably have a blast with this and can totally justify the asking price but if you thoughts are a little more in line with mine, you may be better off trying the 2MD series which is cheaper, offers up more gameplay options, a more satisfying throwing system and lets you experience a more complete version of the sport.