Mini Motor Racing X is going back to your childhood where slot-cars were the coolest Christmas gift around and Off-Road was one of the best NES games you could get your hands on!  In this reimagining of those concepts comes a unique racer playable in or out of VR that has you racing against a few other opponents in an extensive on or offline single or co-op campaign and multiplayer modes that expand upon the games core mechanics.  As my content is VR focused, my review will be covering the game as it plays in the headset. 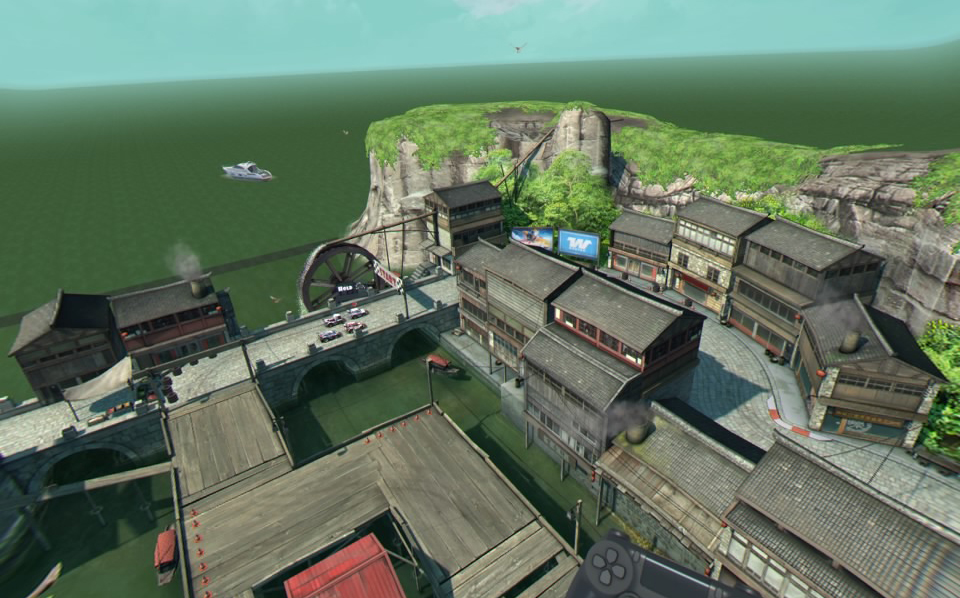 The quality in the visuals is very noticeable.

I did liken this to slot-cars but this does play a lot more like the games Off-Road or Micro machines with you having a birds eye view of the race track below as you race your tiny cars around small tracks.  DS4 or Moves are supported with the DS4 using thumb sticks to steer and triggers to accelerate and plays perfectly fine.  Moves give you the option of grabbing a virtual wheel and steering or actually using an in-game slot car controller to drive your car with either method working quite well save for if you need to activate nitro’s or use weapons.  With the Move options, you are forced to let go of a the wheel or controllers to active your power-ups unless you hold them in a specific and awkward way, though if you are committed enough, you can get used to either method, but for myself, neither ever felt as comfortable as the DS4.  Each course is typically very small and has 4 or 5 laps.  There is the standard career modes and ‘X’ mode which adds weapons to the mix for some slightly different gameplay.  Both modes offer the same career path but must be played separately to unlock the individual tracks for each, meaning you’ll have to play through each track at least twice to unlock the same courses.  Additionally, there is also a Bumper Ball mode which is a 2 v 2 Rocket League clone that tasks each team with bumping a huge soccer ball into the opposing teams net.  Cameras are set up all around the tracks and even in the blimp circling the tracks and while some offer better views of certain parts of the tracks, I found the default camera was the best one to use if you prefer 3rd person action, but if you can handle 1st person, you can clumsily select that view by controlling your car from its roof, allowing for more control and tighter turns than playing from a distance and for those that need them, blinder options are available for that view.  Money earned from each race can be spent on vehicle upgrades, which will be necessary to get through all the Championship stages. 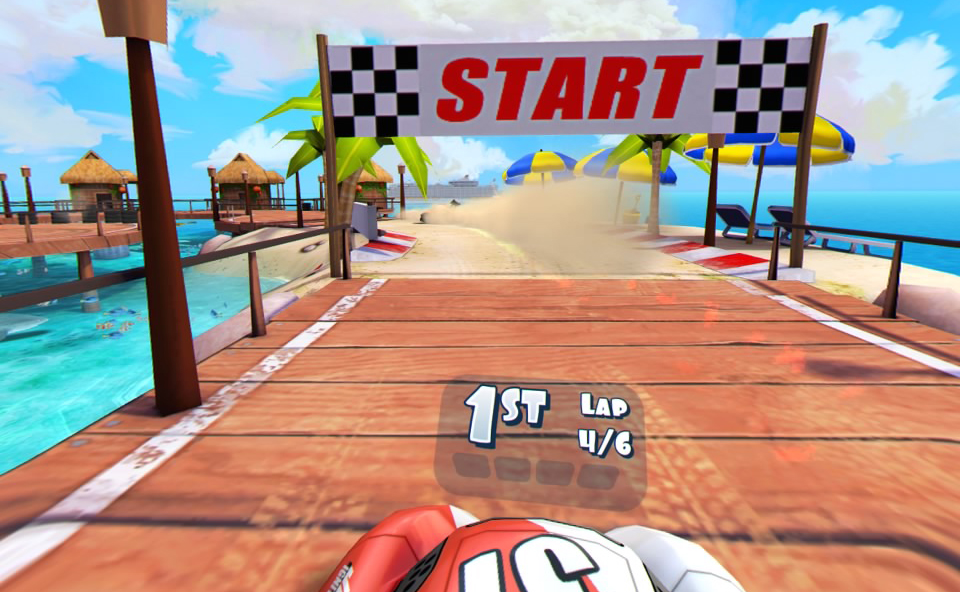 In VR, this is the way to play!

Above anything else in this game, the visual are striking no matter which way you view the game.  All the tracks and cars are inspired by real locations in the world, minus the Fruit Ninja car and course, and take you through a variety of courses like farm lands, cityscapes, ocean sides and a bunch more with the total track count in this game capping out a commendable 52.  From afar, all the stages look heavily detailed and very clear in the headset, to a point where I question the lack of this kind of fidelity in other VR titles.  Even going into 1st person mode reveals some slightly blurred textures, but once again, the detail, even up close, along with just how smooth everything looks makes the game pop in the headset no matter how you look at it.  Stages are also alive with moving boats in the background, hippos yawning, seagulls soaring above and a billion other minute details that bring more life to each stage then I would expect.  Even just watching the races from 3rd person and paying attention to how the cars weight shifts as they take turns and collide with one another just highlights how much care has gone into the visuals.

Audio is a little more lacking with some generic songs that sometimes fit the tracks but often come off more as placeholders not really accentuating the action in any significant way.  Sound effects are a little more on point with each car and collision sounding as they should as well as a variety of sound effects that pop up throughout each race,  There is no 3D audio that I could detect with everything sounding relatively the same no matter which view you play it from, but given how casual this feels, I didn’t take too much offence to that. 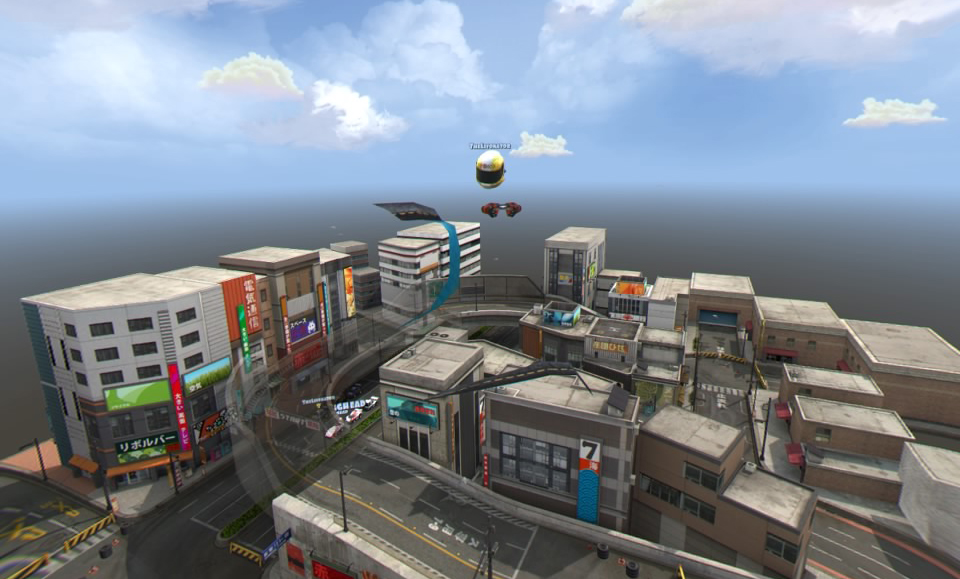 Playing with friends is the best way to play this!

Plenty of modes, tracks, upgrades and solid presentation!  What’s missing you ask? Well, it’s the gameplay which is where the game, for me, takes a huge step back.  As stated, you must play through the championship modes in order to unlock the next level of difficulty.  The 1st championship has 36 “easy” levels which is way too much when combined with the actual racing which feels slow.  Playing in 3rd person makes me feel like I’m controlling underpowered RC cars and even through the track variety is large, they start to feel the same.  Even playing in 1st person doesn’t do a lot to increase that sense of speed making it feel like it’s geared toward a younger audience.  Other issues that pop up are the powerups that appear during the races but seem to really only pop up ahead of the player in 1st place, giving that player a massive advantage over the others as he gets the boosts, weapons and loot that the other racers rarely have access too.  The upgrade system here uses the cash you earn from campaign races and can be spent on a few options with each vehicle having different stats, but as upgrades get more and more expensive, playing with any car but the one you have upgraded is almost guaranteed to be a losing effort in anything beyond the 1st few levels.  X includes weapons which does add that variable, but for the most part I find didn’t really change up the action too much save for when you are hit by multiple attacks making losses due to successive hits feel a tad unfair.  Bumper Ball is fun when playing online, as are all the modes, but is on a much smaller scale then Rocket League and if you don’t have all human players, bots take over the empty spots and they are aggressive and unrelenting ramping up the challenge with the only power up available in this mode being the NOS.  Like I said, it’s fun but feels too small, both in size and player count, to really make it a go to option and I much preferred the races, which once again, I didn’t really care for that much unless I was playing online which doesn’t get you loot to unlock new upgrades. 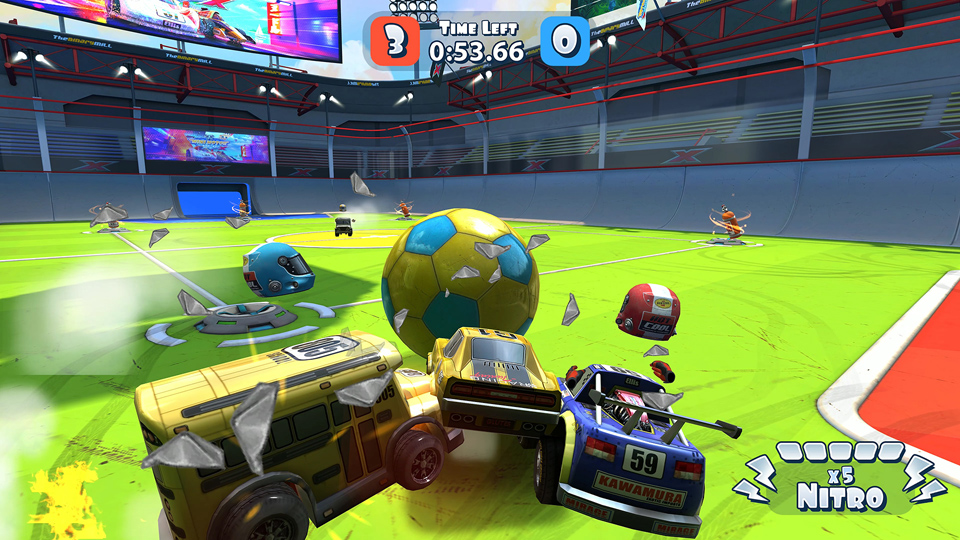 When it’s all said and done, Mini Moto racing gets a lot of things right but fails in one large factor in that it just gets old…fast.  This is only added upon by the excessive grind and level up system which makes every successive upgrade feel like a chore to get through.  My best moments online were when I was racing against friends as it is substantially more fun to grind around corners, cut them off and do whatever you can to win, but that thrill just isn’t there in the single player modes and even if I were to stick with playing online, the gameplay still doesn’t hold up for extended periods.

What would I pay? There is a lot of content value here, but it’s just not for me.  In truth, I’d say if you have kids who play in VR then this holds a lot more value as it does seem to be geared towards children.  On paper, the $25 asking would seem to be an easy ask, but I just found the gameplay to be to monotonous to sustain my interests for anything more then a few races.  Put this in the $10 to $15 range and I say maybe give it a go if you are curious.

The Binary Mill provided The VR Grid with a press code for this title and, regardless of this review, we thank them for that!