Moss is something special, there is no denying that.  Many lament that lack of AAA titles in VR and while that is a valid statement, as time progresses we get more and more glimpses of just what VR is capable of delivering.  Case in point is Moss, an absolutely stellar platform puzzler that sucks you into the story and immerses you in it’s world.  We haven’t seen too many platformers in VR, but I’m guessing after all the attention Moss is going to deservedly get, we are going to see a bunch more in the near future. 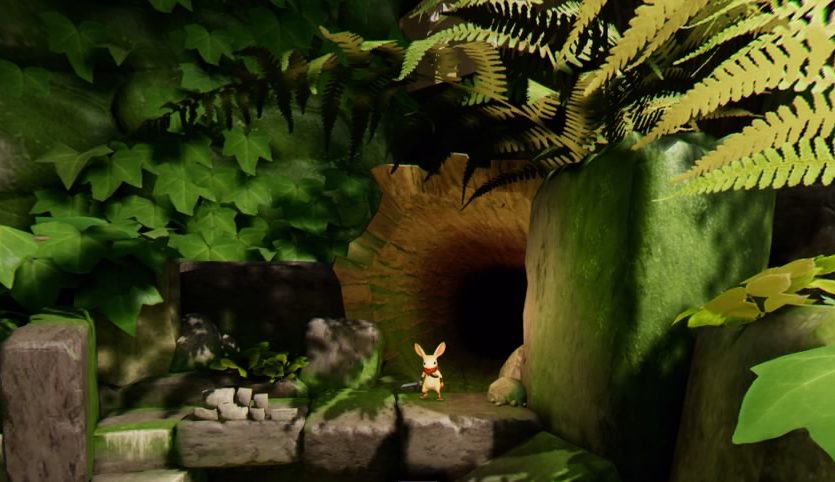 You control and interact with Quill, a little mouse, using only a DS4 controller.  I like that Polyarc stuck with a classic platformer control scheme and didn’t try and get to VR crazy by using some convoluted Move controller method.  As Quill’s spirit guide, you can also interact with certain environmental set pieces, marked with blue glowing runes, and enemies whom you can take control of to help solve puzzles.  You do that by physically ‘grabbing’ an object with the in-game orb that represents your controllers position. So, while this does play like any 3D platformer from the last decade or so, that extra bit of VR tracking is used to add some significant depth to puzzles involving switches and platforming.  Quill is also armed with a sword and should the need arise is ready to duke it out with some strange looking mechanical bugs and the combat, though simple, still feels great and is never relied on to heavily to navigate the game.  Naturally, as the game progresses the puzzles do get harder and will require you to take control of enemies, step on switches, pulls levers and fends of the occasional enemy.  It’s a wonderful balance and has a great difficulty curve that, on occasion, had me stop to think for a minute what was required of me, but I was never stuck for too long and went through the campaign at a steady pace.

The visuals here range from gorgeous to completely stunning.  The amount of love and passion that went into Moss can be seen in every single set piece you come across.  I’ve said before that scale in VR is criminally under-used, yet in Moss it’s handled with elegance eliciting so many awe-striking moments that I took the time to just stare at every single new area I was in.  The narrative is told in a church as you flip the pages in an animated book.  When the game starts, Quill, using only body language, directs your attention downward whereupon you see your Spirit Guide reflection in the water, this was only the 1st of so many striking moments in the game.   Smaller touches like leaning into to Quill just to watch her reaction or giving here a high-five after a difficult puzzle highlight that although you are controlling Quill, you are also just as much a part of this world as she is.  The set pieces range from stony ruins in a forest, swamp lands with remnants from an ancient human battle, to a mine and castle and all of them are breathtaking.  Seriously, when you play Moss, don’t rush, just take your time and look around, there is a lot to see and some of the finer details are not to be missed. 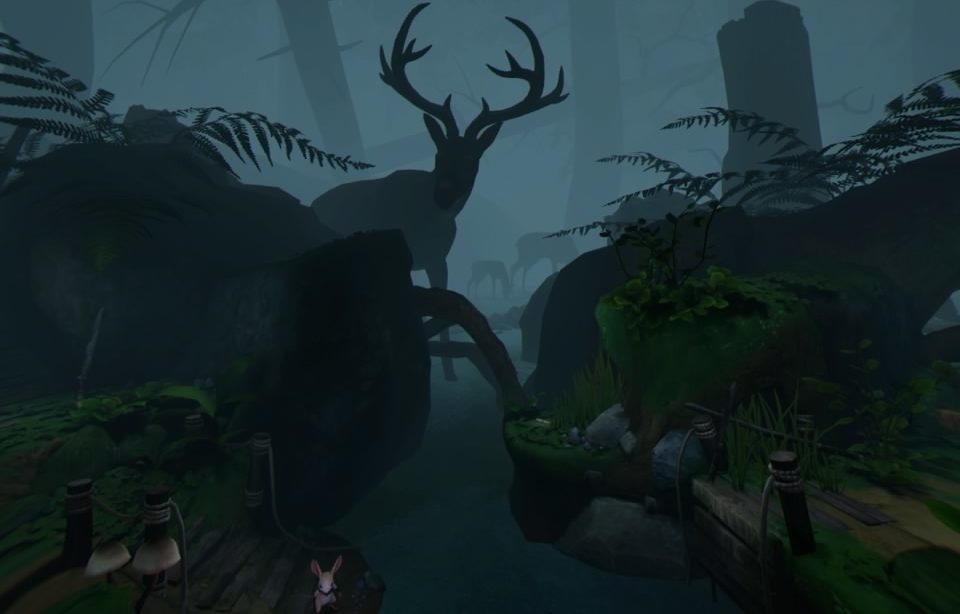 The use of scale in Moss is awesome!

To no surprise, the audio is just as great.  The ambient sounds peppering the game compliment the visuals perfectly.  As the story is told and unfolds, it is narrated by a female voice actor, which actually surprised me a bit as the story went on.  She assumes the tone of different characters as she reads the ongoing story, akin to a parent reading a bed-time story, and I think typically, this kind of story telling would be done by an older male actor which I’m sure would have worked just fine, but the way Marla Gorrondona tells the tale, I appreciated the extra bit of charm she gave to the story and couldn’t imagine any other voice carrying me through my journey.  Quill is much more of the silent type, but still elicits the occasional exclamatory noise.  She does most of her talking by getting your attention and pointing, which you really only see after taking a little too long in a puzzle area.  Everything sounds wonderful here and the 3D audio just immerses you deeper and deeper in this little fantasy world.

Alright, now for the bad.  In truth the only issue had was when I walked from a vertically moving platform to a flat area and got caught on an invisible barrier.  Typically, most of the platforms move up and down on their own so the next time it came up I was free, but on one occasion, enemies were about and blasted me away before I could unstick myself.  Other than that I personally have no other issues to bring up.  Some have lamented the shorter length when compared to other non-VR platformers, but that’s not a fare comparison.  It took me around 3 hours to get through the campaign and I was satisfied with what was delivered.  There are also hidden scrolls scattered around which complete a stained-glass window in the church scene and I haven’t quite found them all on first play through, but it’s a great excuse to dive back for a second round. This a game that delivers on quality over quantity and is perfectly paced.   I helped and controlled Quill to get the end of this story and took my headset off, and just reflected on what a great game this was.  I mean, yeah I want more, but that’s only because this was so great, not because there wasn’t enough of it. 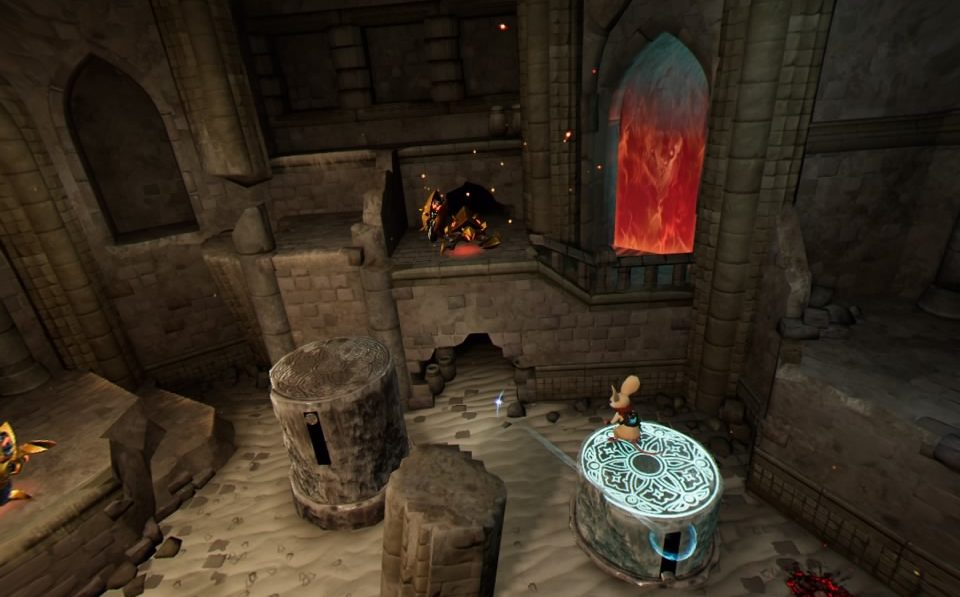 When the battles and puzzles mix, things get tough!

If you can’t tell by now, I fell in love with Moss.  The last VR platformer that I played (and enjoyed) was Theseus and if you played and liked that, then this is the next evolution of VR platformers and you need to pick this up NOW!  While Theseus was a tad rough around the edges, it delivered what was in my opinion, a solid VR platformer.  Moss has no rough edges and is a completely smooth and engrossing story.  Quill has her own personality that you see glimpses of, the story is a classic tale of non-hero finding herself in what turns out to be an epic quest and the presentation is next to flawless. This is in my top 5 best PSVR games of all time and is a must play for anyone who owns the headset.

What would I pay? The $30 asking price is an easy ask.  This is one of the most beautiful, endearing and polished games to grace the PSVR and sets the new standard for quality in VR games, regardless of the genre.

Polyarc provided The VR Grid with a review code for this game and, regardless of this review, we thank them for that!