During 2019 and into early 2020 we’ve seen a whole string games release that have really pushed VR gaming forward by focusing on advanced physics. These titles – notably Blade & Sorcery, Boneworks and The Walking Dead –not only place players in a believable VR environment but also construct core gameplay mechanics around how weapons and items are used and manipulated in a believable physics simulation. It’s a huge amount of fun to experiment with consistent physics in a VR environment and the enhanced interactivity feels very much like the future of VR gaming.  Hellsplit Arena, which actually released before some of these better-known titles back in September 2019, in many ways symbolises both this VR future while also having some of the trappings of VR gaming’s past. It incorporates physics-based combat – albeit a slightly watered down version compared to other games – but packages it in a somewhat tired wave based arena format. 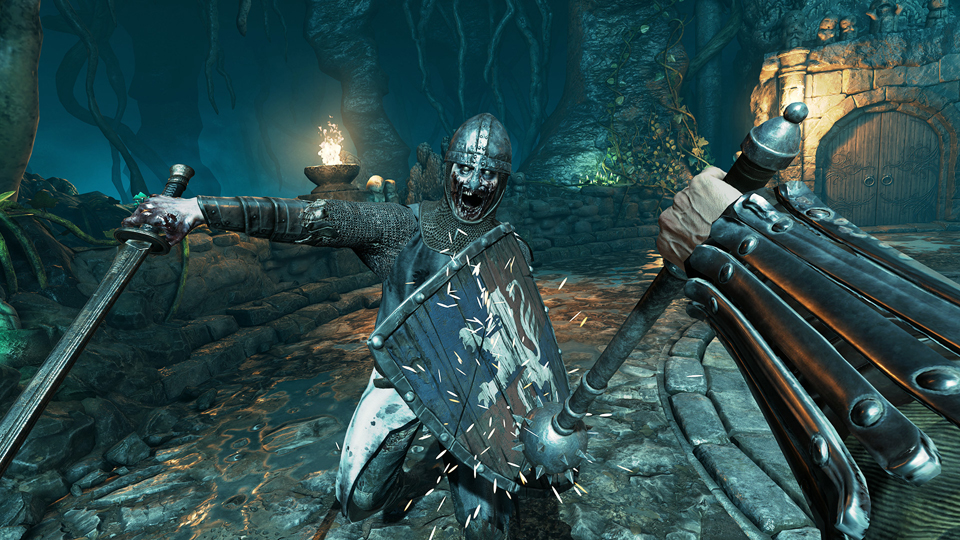 The combat is visceral and fun.

Everything in this melee focused hack and slash title has presence and weight.   Swing a sword at a wall and it will bounce off of it. Use a claymore sword and you’re going to have to use two hands and mime that is has weight. Slash at a zombie’s arm and if you have enough force and accuracy you might lop it clean off. We’ve certainly seen this type of physicality and simulation before, and Hellsplit is not going to win any points for originality, but it’s undeniably great fun and very immersive.  Deflecting an enemy’s sword with a well-timed shield parry – which is all completely organic and with no computer assist – before crunching your sword into their mid-drift is (in a slightly disturbing way) incredibly satisfying. It’s also very physical and quite a work-out. This type of combat lends itself well to player creativity and you have a lot of potential to come up with increasingly bizarre (some might say sick) ways to defeat enemies. The game also pushes you into this by providing a whole range of weird torture and impaling props that with a well-timed kick or push can see an enemy mashed up in a multitude of grotesque ways. Hellsplit is a surprisingly fun party game if you and your friends compete over who can dismember an enemy in the goriest way possible (there’s a sentence I never thought I’d say out loud)!  There are two core modes to sink your sword into here: training and campaign. The training mode is essentially a sandbox that allows you to pick any weapon and armour and take on enemies of varying difficulty in a selection of simple arenas at your own pace. It’s a good way to get yourself used to the combat before taking on the campaign. 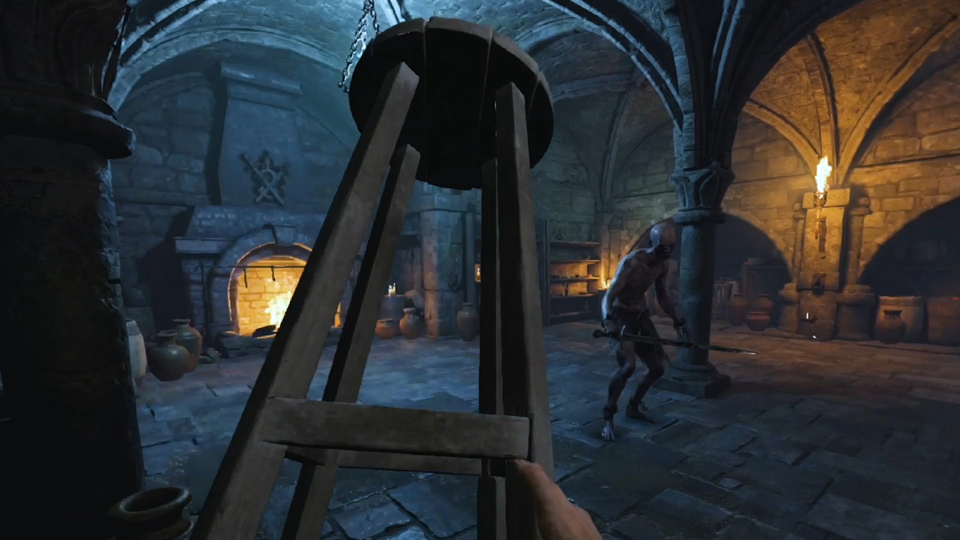 It’s fun to use random stuff as a weapon.

While based around simple, slightly dated wave-based arena combat the campaign is surprisingly addictive and where you’ll spend most of your time. It provides a modicum of a story to add some context to proceedings but it’s pretty threadbare and generic and certainly not the focus here. You start off in hub-like castle area which serves as your base. From there, you can access multiple stages, each of which takes the form of a simple circular arena set in a variety of gothic environments. You then face off against an increasingly difficult set of enemies until you tackle a boss at the end of each stage. The game rates your performance in each stage and awards you gold based on your score. You then spend that gold in the hub to upgrade your weapons and armour and to buy certain buffs and health potions. It does get quite repetitive, and is clearly quite limited, but because of the interesting physics simulation and the sheer visceral thrill of pummelling an enemy with an ever growing range of weapons I found myself enjoying it’s simple pleasures far more than I expected.

It also helps that the game looks absolutely gorgeous – in fact, I would argue that Hellsplit Arena is one of the best-looking VR titles to date.  Each arena looks incredible, with high levels of detail and wonderfully evocative, organic lighting. The sheer fidelity of the environments really brings them to life and makes you feel extremely present. It did make me yearn for a fuller, Skyrim-esque open-world game with this level of fidelity, but what is there is impressive. Performance is also solid and consistent and everything, bar some dodgy wording in some of the item descriptions, feels polished and robust. The only presentation issue is a really annoying announcer who is completely out of step with the tone of the game and feels entirely unnecessary. 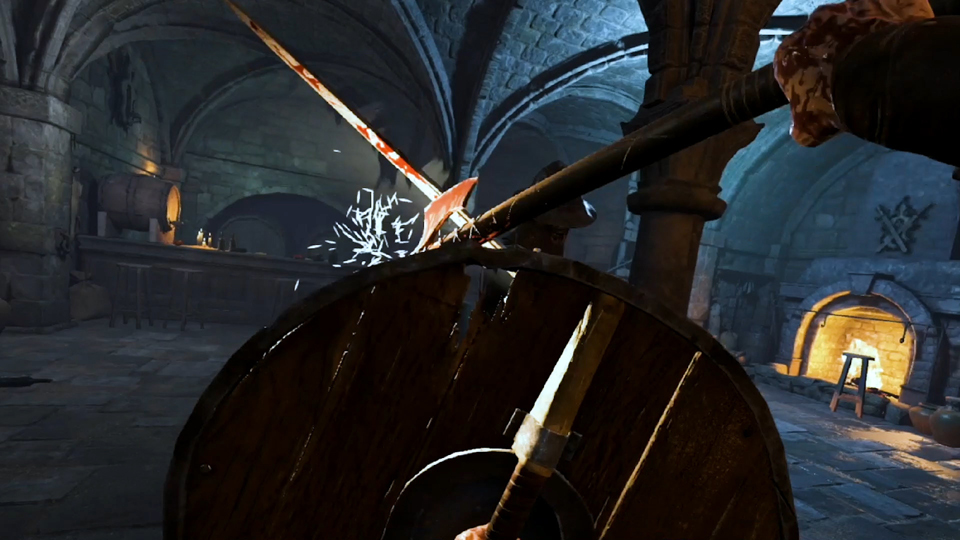 The shield is your friend.

There are a few areas where the game slip ups. And when I say “slip up” I mean slip up. The enemy AI is poor overall and in particular the enemies have this strange habit of tripping over parts of the environment, leaving themselves as an easy target for a quick and undignified end. I’m all for using the environment to your advantage but when you’re in the middle of a blood thirsty tussle with a bunch of zombies, deflecting blows while ducking and thrusting and feeling your blood rush as you do your best Gladiator impression (“are you not entertained!”), it can’t help but be pretty immersion breaking to watch one of your mighty assailants trip over a small clay pot and gift you an easy, ugly kill as they lie sprawled on the floor janking out.

Unfortunately, this is not the only instance of janky physics at work and while generally the game is solid there are definitely some odd moments – particularly regarding enemies sticking to swords when you’ve impaled them. I felt that generally the physics at play here were not as accurate or as well defined as those found in Boneworks or Blade & Sorcery. A good example being how if you have a weapon equipped in each hand in Hellsplit and then bang them together (a classic way to demonstrate VR physics 2.0) they don’t always react how you would expect. I also felt like some hit boxes for certain weapons were slightly off and this can lead to some moments of frustration when you’re sure you’ve landed a killer blow only to see your blade brush harmlessly off the side of a monster’s helmet. 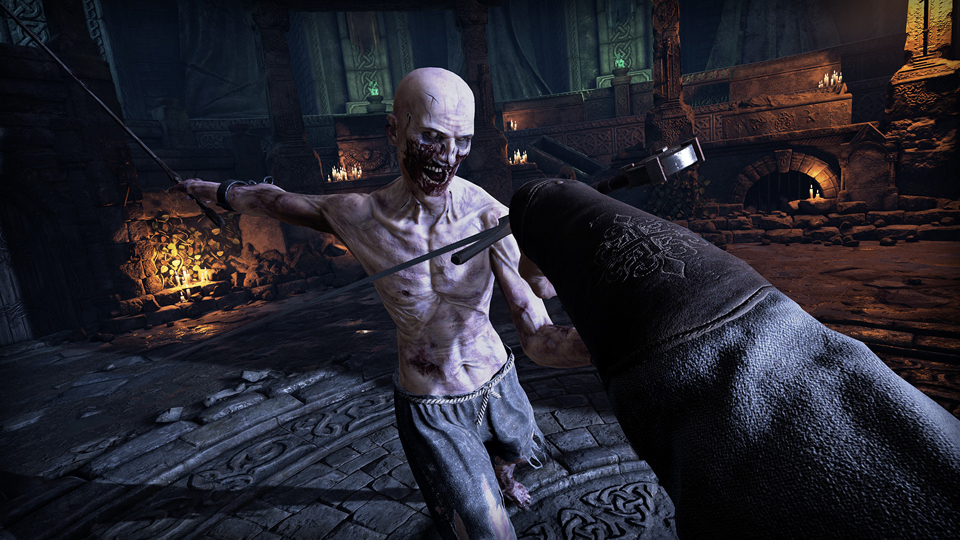 Maybe you should give this guy a hand!

To my mind then, Hellsplit symbolises both where VR has come from and where it’s heading. Gameplay is based around the very modern VR trend of advanced physics simulation and object interaction (although this is not the best example of it) and graphically it’s as good as anything out there. But on the other hand, it falls back on the tired VR trope of repetitive wave-based arena combat. I have to say that this is one of the most fun and immersive examples of wave based combat I’ve played, but there’s no getting around the fact that this is genre type we’re starting to move on from and, given the relatively high price of Hellsplit, I wonder if many potential buyers will look past it in favour of an increasing range of games that offer similar physics based gameplay but in a proper action adventure game package.

What would I expect to pay? The game costs £19.45 which I would say is right on the upper limits of what I would expect to pay for a wave-based melee combat game. While it’s certainly polished and enjoyable, it doesn’t offer much more than wave-based arena combat in a limited number of environments and that does get repetitive. My recommendation would be to wait for this to go on sale.