I never played the 1st climb game…or at least at the time of this writing I have yet to play it though I am very familiar with climbing in VR thanks to its inclusion in games and experiences like Robinson: The Journey, Carnival Games, Everest VR, the Vader Immortal series and many more.  It’s the sort of real-life activity that is awesome to emulate in VR as it mimics the real experience nicely while letting you enjoy all the dangers from the comfort of your home. 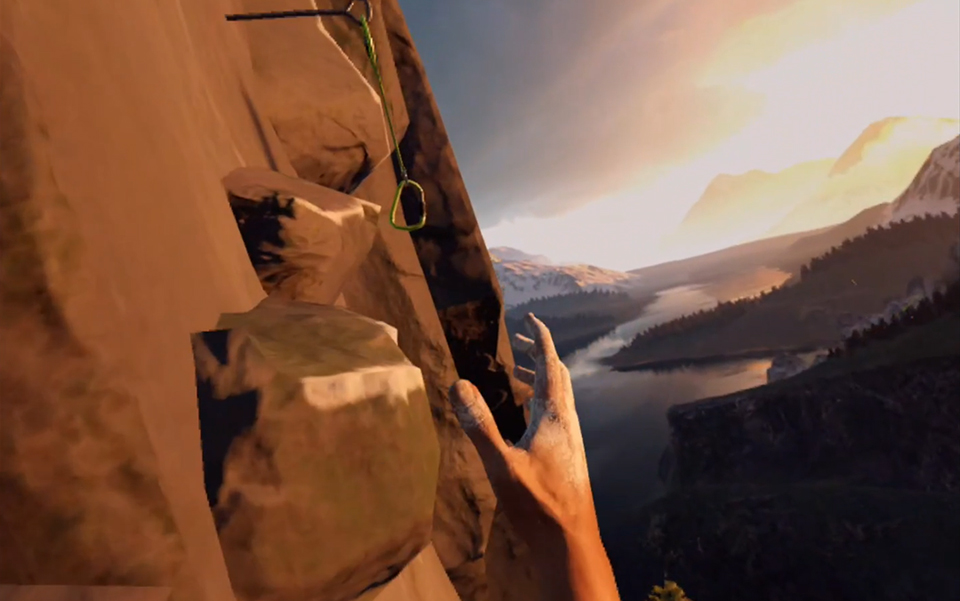 The view can be impressive at times…the textures less so.

Climbing in VR is simple right?!…. WRONG!!! An introductory tutorial lets you know there’s more going on here than just grabbing the next handhold as you’ll have to deal with an array of factors that affect your climbing abilities…unless you play on casual mode which is literally just grabbing the next outcropping you see, which are usually very clearly identified.  That’s fun enough, but for those that want to experience a more realistic version of sport then you’ll have to deal with a variety of factors including stamina, chalking your hands and differing types of hand holds which could cause you to fall if you aren’t paying attention.  Each hand has its own stamina meter, represented by a bar just below where your wrist ends.  Holding on with only 1 hand drains that hands strength so if you don’t swap them out, expect a quick fall.  To regain stamina, you need have both hands grabbing at a hand hold at the same time.   It became second nature to not think about my stamina, but it can be easy to get into a groove and forget, causing an errant slip and subsequent fall.  Additionally, you can half press the trigger, effectively loosening your grip but not draining stamina and while it’s mechanic I never bothered to master, it allows you to climb without worrying about your stamina for those better speed runs.  Holding down a trigger while shaking that hand applies chalk to it to help reduce the drain on your stamina.  Not all hand holds are created equal either with some disintegrating mere seconds after you touch them while others may cause you “damage” which prevents the stamina in that hand from refilling while you are holding on to it.  There are 5 different locations to choose from, each with 3 courses ranked by easiest to hardest with the latter not being playable until the former is conquered.  Online leaderboards are present for those speed runners out there, as is available loot in the form of watches, gloves, and wristbands which you unlock by achieving stage specific goals.  Multiple paths also add to the replay factor making for a nice VR climbing package for those looking for fun or challenge or BOTH. 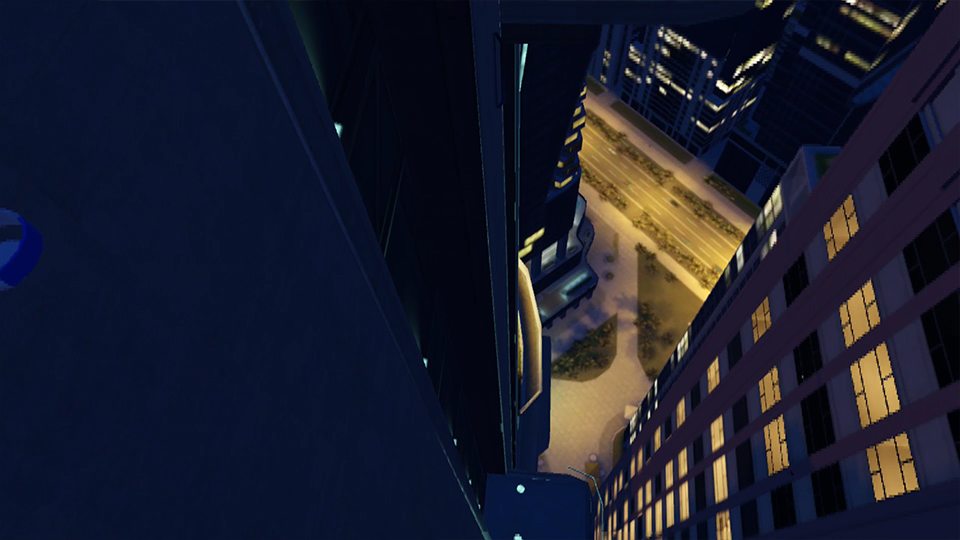 Higher and higher we go.

Visually, The Climb 2 is both impressive and disappointing.  My 1st stage had me against a rocky mountain face, surrounded by forests, mountains and a village with those mountains looking very impressive with the other stuff looking much more like lower resolution images, which is all the backgrounds are.  These can look better or worse depending upon the stage, but when I noticed that lacking visual fidelity, it affected my enjoyment of the game.  Up close, the stages fair much better with everything close being rendered quite nicely with some near realistic rock faces and it’s sweet to see a gopher checking you out or a puffin waddling back in forth while birds fly nearby.  Dynamic lighting effects are noticeable, especially in stages that darken or brighten thanks to a rising or setting sun and seeing the gleam off of nearby rock faces while the sun crests behind a mountain can make for some breathtaking moments.  Those moments can be dashed though by the rampant pop-in that occurs, less so when you are climbing but can get ridiculous when you are zip lining to the next building or making a huge leap.  Multiple paths in each stage ensure some new views and extend replay value with the occasional cinematic moment kicking in as ladders fall and elevators climb, mixing things up nicely.   Your hands animate just fine as they grab at hand holds with some other nice surprises like signs that shift grip positions or a way-to-close rattlesnake that create some very unique obstacles.  As good as it looks at times, it’s disappointing that this isn’t available for more powerful headsets as it feels like a game struggling within the stunted power of the Quest platform.

As far as the audio goes, I really don’t have anything to complain about.  Some great ambient 3D audio is in effect with the wind blowing in your ears and the sounds of the animals or window cleaners around you always sounding as they should.  Music briefly plays when reaching notable checkpoints in each stage, which I appreciated as it made the task of scaling these walls a little more personal and realistic.  You can choose the sex of your character at the games onset and hear him/her throughout your climb typically just catching their breath or letting sound of effort as you leap from outcropping to outcropping and of course, should you fall, a guttural scream lets you know you messed up. 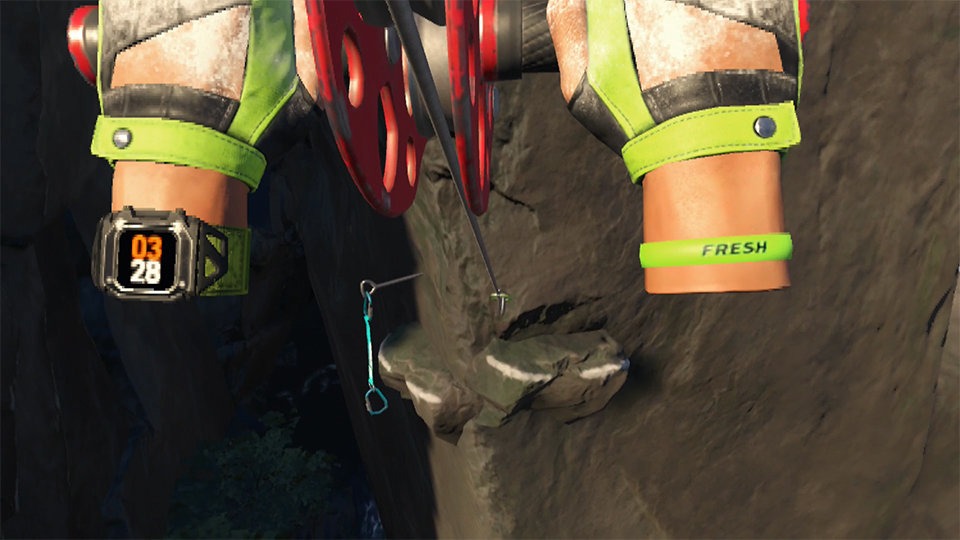 Zip lines are a hoot!

The Climb 2 is great, but it feels like it needs a little TLC and some better optimization.  The climbing mechanics are awesome but on more than a few occasions I ran into glitches, bugs and hiccups that need to be addressed.  Your only as good as your last save point BUT twice in play, I fell and hit a previous save point and once I perished, restarted at that earlier spot which was disheartening as that timer kept counting.  If your head goes into geometry, your screen goes black until you adjust yourself which is fine, but the game is automatically set to keep you front facing so if you jump to an opposing face, the game may force you into said geometry causing some disorientation as you try and right yourself.  This can be turned off in the options, forcing you to turn fully in the real world but as many may play this sitting, a little refinement is needed.  Jumping long distances can make for some of the best moments in the game and you’ll feel like an action star when you make those distant leaps but sometimes it just doesn’t work right causing bounces off of geometry that send you falling to your doom or lacklustre efforts as the quest reads your motions wrong and thinks you are going for a little push when you actually putting in a lot more effort.  This only happened on occasion, but once again, when it did, it frustrated and annoyed me.  My last bone of contention would be how short the death falls are.  I love falling in VR and would love to plummet all the way to my death, if not just to enjoy the ride and, in my opinion, those long falls are cut off way to early and I would love to see an option to toggle full falls or quick restarts as an option. 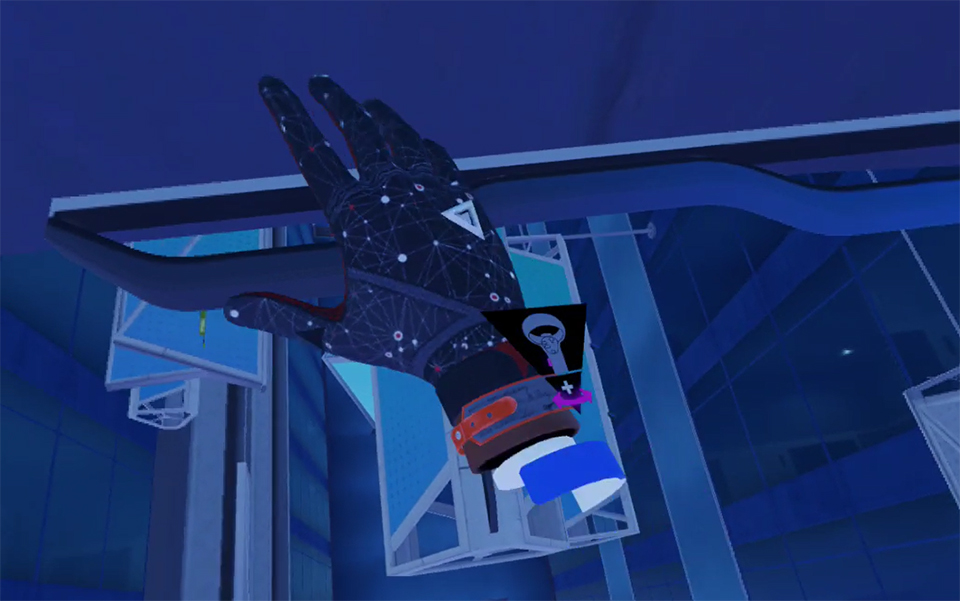 You’ll climb some pretty crazy stuff in the city stage!

The Climb 2, for the Quest, feels like a portable version of a bigger, better game.  I can’t help but feel that the Quest version was put out to push headsets at the expense of the better PC version of the game and it suffers for that.  If the PC version was available at launch, and assuming it was cross-buy like the 1st game, then I’d be more forgiving of it’s shortcomings as it is a great time, just packed into a less powerful headset.  At launch, I’m enjoying the game, but I honestly can’t wait for the PC version that delivers on ALL the potential this promises as it feels like a title built for more powerful headsets.

What would I pay?  The content value is here, but the amount of immersion breaking issues that pop up (pun intended) just hurt the overall experience.  It’s still great fun and if you only have access to a Quest headset, you’ll have a blast but the issues I ran into makes it hard to recommended at that full price.  $20 US is as high as I’ll recommended for this currently though a cross-buy Rift release that addresses the issues I mentioned would totally justify the full asking price for this.