On its surface, VR Furballs-Demolition would appear to be nothing more then an Angry Birds clone only in VR and I suppose that statement is apt enough, but VR Furballs is more then just another slingshot/physics game.  Instead the developers have chosen a beloved formula and spiced it up in their own ways with multiple modes, in-game items that change up the gameplay and much more content then we have seen from the flying fowl…at least as far as VR goes. 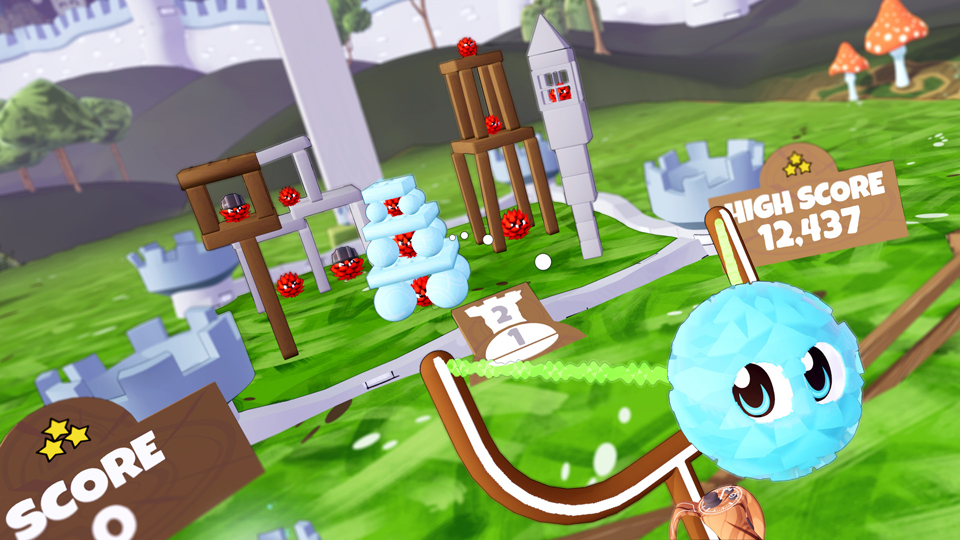 Pull back and release!

The base game has you holding a slingshot, so you are going to need two hands to launch these little furballs at the evil Baddies through the 54-stage campaign.  Grab the slingshot, grab a furball, place it in the the slingshot and pull back for as much, or as little power as you would like with a power bar indicating how strong your shot will be.  Room scale tracking allows you a better angle for your shots and you can teleport into the target area for a closer look at where the baddies may be hiding.   Where things get a bit spicier is that each furball may have a unique ability or be able to do extra damage to the environment, based up what color they are or just how they look.  Stages change up a lot with many requiring specific strategies to use to get through them as just firing all willy-nilly will get you nowhere fast.  As you progress through the campaign, you’ll accrue additional weapons like a tennis racket, furball launching drone and even a furball launching gun, which can aid you in your destruction.   A late addition offers ‘Arcade’ Mode’ which auto loads the furballs,  speeding the game up nicely but must be started from scratch every time you play making it more of a demo mode. Typical of the genre, a 3-Star system is in place tied to how many furballs you use and the amount of destruction you unleash in each stage.   Besides the campaign you can play in 1 of 6 mini games that have you playing whack-a-baddie, shooting hoops, popping balloons a few others.  Want more, you can now create your own levels using the same level creator the developers used to create the game or tag off in party mode to see who has the most skill in those mini games.  You can also take selfies with an in-game camera or switch things up entirely using giant furballs and optional bullet-time modes but keep in mind that to unlock a bulk of this content, you need to play through the campaign first with each stage completed unlocking  new items, modes and furballs.

VR Furballs looks good opting for a very cartoonish and cell shaded look along with a bright and colorful palette making the game appear very friendly.  The furballs all act on the own accord, looking around the map and reacting to your movements when you nab them.  There are 5 different stages covering the usual themes like winter, summer and so on with each one adding nice little superficial touches to the game.  As you proceed through the game, you’ll see more new items making up the levels including teleporters, bowling balls, cages and a bunch more and with the stages being build largely by individual block pieces.  Some of the levels take shape in fun ways like a giant deck of stone cards or a house.  With 54 stages there is a lot to see here and the level design keeps thing fresh as you never know what the game is going to throw your way next. 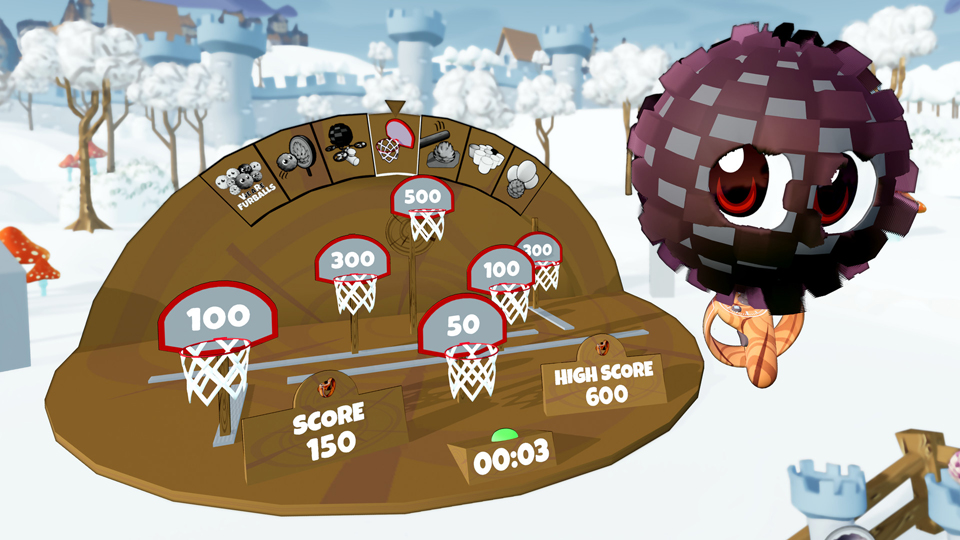 Take a break from the action and shoot some hoops!

Keeping in line with the friendly vibe in the game, the music is whimsical and happy, belying just how difficult this game can be at times with the furballs and baddies all making cute noises with lots of ‘oomphs’ and groans as they impact with anything, though they do sound oddly human which feels like a weird choice.  That said, in a game like this, I wouldn’t expect to be blown away by the audio but do expect the effects to match the action and thankfully they do, giving VR Furballs a nice sense of polish.

There is a lot of content to chew through in VR Furballs, though much of it you have to unlock by playing through and/or beating the campaign, which at times is no easy task.  Some of the stages in the campaign are really hard requiring multiple plays with many designed with specific strategies that may not be readily apparent at 1st glance.  I take issue with having so much content locked without playing through a bulk of the campaign.  That’s not to say you won’t have a fun time doing it and when you unlock an new item to change up the gameplay, that’s nice too but I think just to have some nice breaks from the campaign and seeing the “locked “icon over top of the content is a little annoying.  I also ran into the issue of levels relying a little to heavily on luck with explosions needing to be in the exact right place to hit the right objects or baddies.   Trial and error will get you through those stages, but every time I quit the game, it was because I landed on 1 of those levels and got frustrated with what was being asked of me. 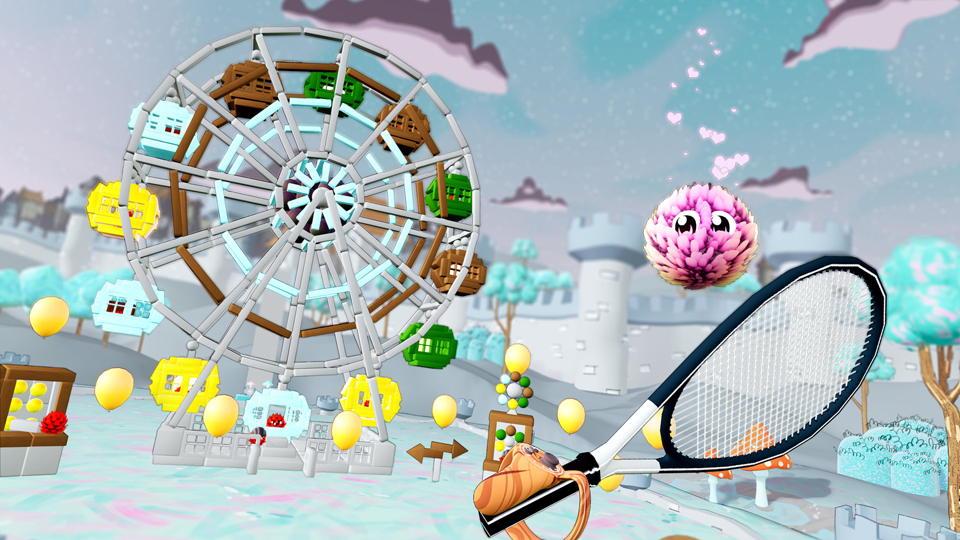 Some of the level designs are very fun!

VR Furballs is a technically sound and very pleasant, family friendly game and the inclusion of party-mode does make it an easy one to pull out and show your friends.  With that said, I found the some of the stages to be unfair to the point of annoyance as I felt luck was the key factor in getting through them, not skill.  Like I said, trial and error will get you through those tougher levels, but I just can’t help but think a little tweaking of the physics or level design would increase the overall fun factor here.  Still, if you like physics based puzzle games, like Angry Birds, this does a solid job at emulating that genre while still making it feel like it’s own and to take the time to unlock all the content will take you a few hours at the very least.

What would I pay?  The content value is there and those stages needing luck are few and far between with most of the game offering decent challenge putting your skills to the test.  $12 is great for this and despite those few stages, I had fun destroying the levels and taking out the baddies.

Gamily Studios provided The VR Grid with a press code for this title and, regardless of this review, we thank them for that!