When I first saw the trailer to Vertigo Remastered, I was instantly intrigued by the wide variety of gameplay on display, bizarre world this takes place in and the polished vibes that video exuded.  Fast forward a few months and I finally got to play the remastered version of a game I never played and in fact never even heard of before that trailer and I gotta say…I’m impressed.  You play as an unnamed protagonist, stuck in a massive underground complex and must make your way to the surface using a few weapons and a teleportation gun, all while avoiding the robots and angry lifeforms that are in your way. 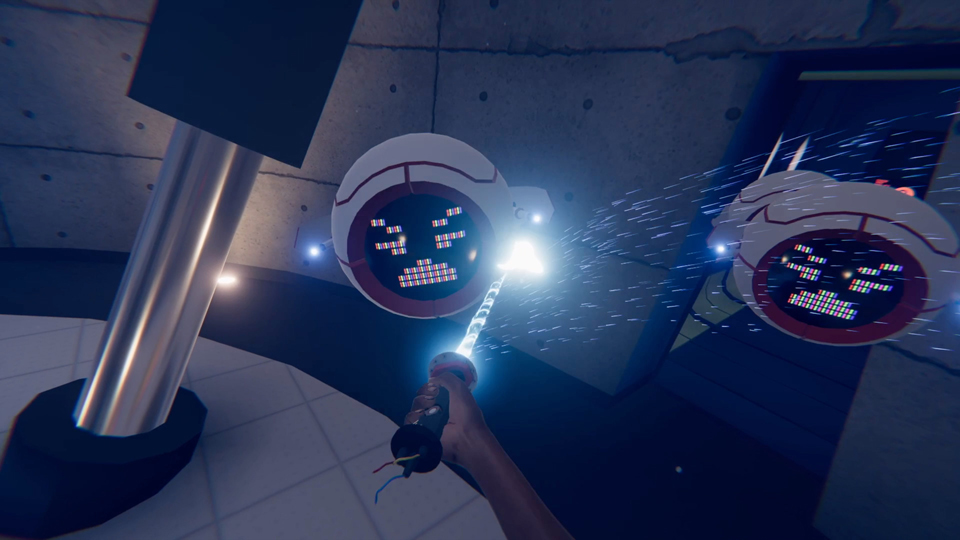 Beating enemies down is very satisfying!

This controls like most VR FPS titles and utilizes familiar mechanics we have seen in other popular VR titles.  Full locomotion is available though you are equipped with a teleport gun that plays very similar to the same movement mechanic in Budget Cuts, allowing you to hop around any stage and help solve the variety of environmental puzzles thrown your way.  Each of your hands has a menu system not unlike the one featured in Half Life: Alyx which lets you choose from a couple of guns found during the 3 to 4 hour campaign, a laser-baton and your teleport gun and you also have 2 inventory slots on your sides that let you store items needed to solve nearby puzzles.  That teleport gun of yours can also collect a globular energy hidden throughout each stage which can be used to upgrade everything from your walk speed, teleport speed or range, along with weapon range and efficiency.   The only save system in place is a sometimes-erratic checkpoint system which works, but seems to save at odd times, forcing you to go back a little bit further then seems necessary.  There are no health pickups or shields to worry about.  As you accrue more damage, your vision will slowly turn monochromatic so when you lose all sense of color, it’s best to take cover and give your health a chance to automatically replenish    As you travel from floor to floor, each has their own specific obstacles and themes, so you never really know what the game is going to throw at you next. 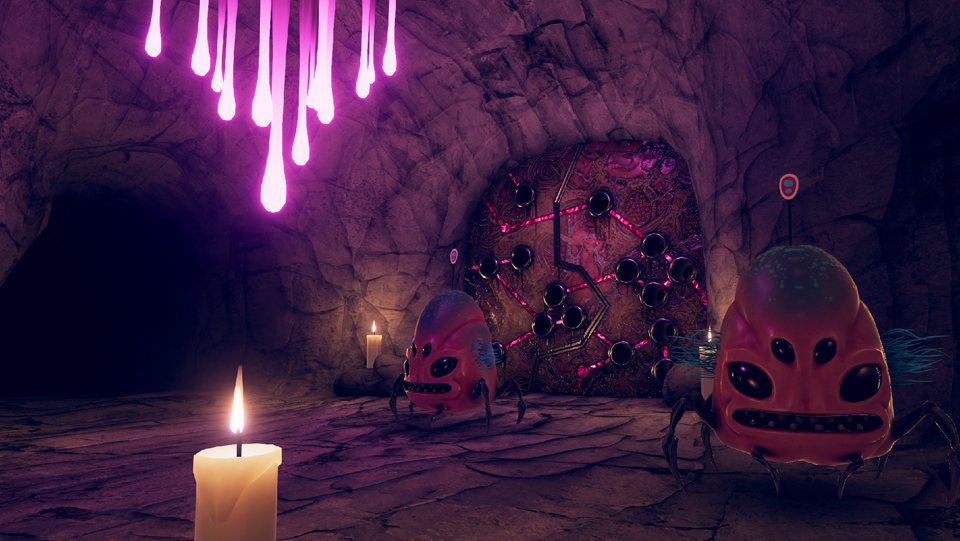 Vertigo Remastered has a very polished look and feel with some wonderfully animated enemies and life forms that come is all sizes from little cat sized critters to huge robots and other monsters that really make you feel both small and large.  As you are traveling though a large scientific complex, you’ll see a lot of grey walls and doors with the overall look of the game coming off as very polished, if not a bit stark thanks to the lacking textures on most things, once again reminding me of the look and feel of Budget Cuts.  While many of the environments you find yourself in are rather sterile, they only help highlight the more diverse settings like a cave system, gas filled hallways and larger scale rooms that look quite striking.  Accompanying the refined look of the game is some decent physics that give almost everything a feel of weightiness.  Their isn’t a ton of stuff to mess around with but you can grab or touch just about anything.  Melee is probably your most effective attack and enemies react accordingly when you give them a solid whack.  Unfortunately, while I did admire the physics at play, I found my weapons often getting caught up in geometry if doors closed upon them or some other random glitch, though never once was this a game killer and I manage to waggle my weapon out the environment.  Some minor issues aside, I thoroughly enjoyed the look of just about everything in the game and while it didn’t blow me away, I was pleasantly surprised by its quality.

One the high points in Vertigo is the audio design which is something I noticed throughout the entire campaign from the opening moments all the way to the ‘to be continued’ conclusion.  The voice acting is fantastic but even more impressive  is the spot on soundtrack which kicks in at the exact right moments to amplify the feeling of unease, suspense and action as you navigate the facility.  There is some alright 3D audio in here though sometimes your enemies could be alerted to you through walls causing some confusion as bullets fly your way from a room far away, but once again, a minor issue at worst. 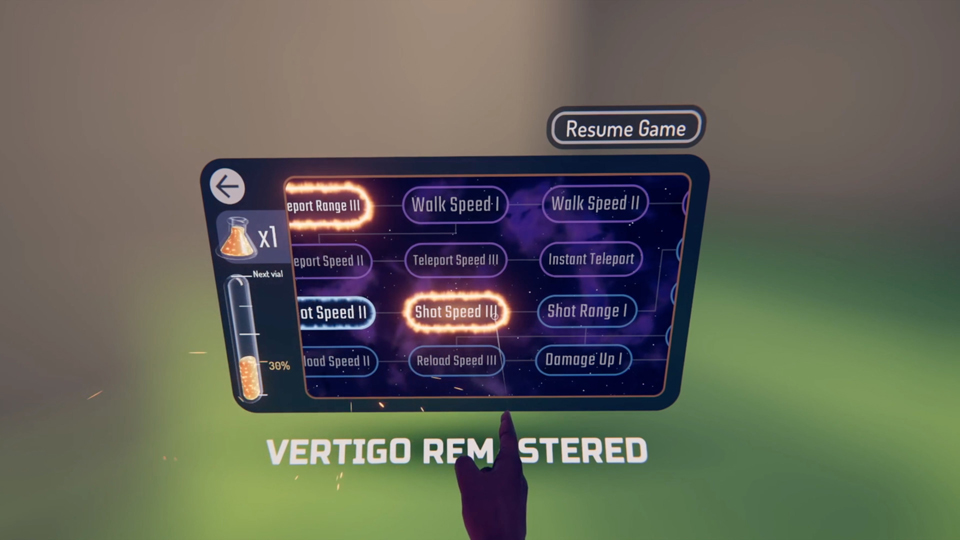 Upgrades are very important so look around for that globby stuff.

I really enjoyed this title and while it does have some small issues, it has a near AAA feel with an incredible scope loaded with some challenging action sequences accompanied by lighter, comedic tones that work wonderfully together.  That upgrade system had me checking around every corner and searching high and low for that floating ooze and by the time I reached the games final stage, it was clear I had missed more than few hidden locations despite my best efforts to find them all as I was missing a few upgrades.  A couple of mid and late game weapons spice up the action nicely and the boss fights keep things very fresh, like a giant black one-eyed blob names Frank who sends tidal waves of ooze your way.  The melee can be a bit of waggle fest despite the physics at play and some of the early larger encounters can be challenging as you may not have found enough ooze to upgrade your abilities but trial and error will get you through any of the harder sections of the game should you be struggling and I think most of us will breeze through the campaign without too many issues.  I did run into a few game resetting problems where I was loaded into an all white screen multiple times during the gas stage that forced me to not only quit the game, but reload older auto saves. I had issues playing seated as I would end up being stuck halfway into the floor and was forced to toggle the seated setting and recalibrate to fix this only for it happen again and again until I just decided to play standing.   It has some technical issues to iron out, but even with those bugs, I still really enjoyed my time in the game. 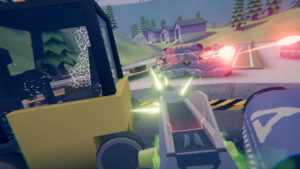 You’ll find yourself in plenty of gun fights!

Vertigo Remastered is, in my mind, a little VR gem that shooter fans should play.  It echoes a few VR titles we have seen over the last 4 years but has it’s own unique style and flare and the homages to the Half-Life franchise as well as a few others had me grinning whenever I spotted them.    With a sequel on the horizon I think this is a must play for anyone looking to lose themselves in a strange and comedic world rife with intrigue, puzzles and action.

What would I pay?  This is $25 and I think that is just about perfect.  The few minor issues I suffered can easily be overlooked by the fantastic use of VR and overall quirky vibes that kept surprising me over and over as I slowly made my way toward the planets surface.

Zulobo Productions provided The VR Grid with a press code for this title and, regardless of this review, we thank them for that!