Rangi has been on my reviewing radar for some time, ever since the Gear VR got motion controls as a matter of fact, but I just never found the time to look at this unique nav point based puzzle platformer.  Man did I miss out!  Way early on I reviewed a game called Lands End and it straight up blew me away, and though it was a little on short side, the minimalist visuals and simple puzzles won me over and it became, and still is, one of my favorite games for that headset.  Rangi has taken that simple formula and made a game that feels like somewhat of a spiritual successor yet stands alone and fleshes out almost every of aspect that was touched on in Lands’ End. 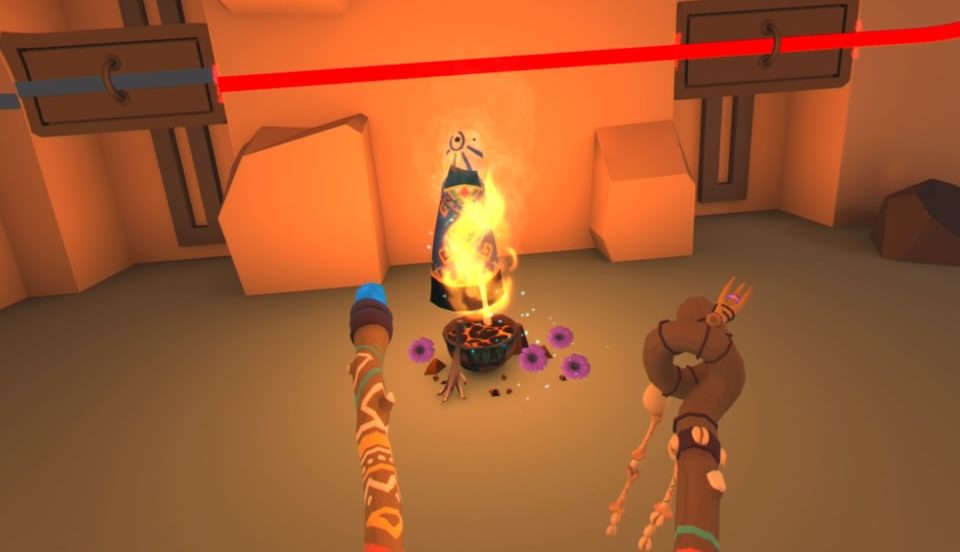 Be careful, not all of these guys are friendly

With 2 Move controllers, you are Guzuriki and you are tasked with finding your African ancestors’ lost rhythm.  Equipped with 2 different staves you begin to traverse some strange lands, solving puzzles and navigating some treacherous paths.  Navigation is done by waypoint so when you see the next white ball, it’s best you target it and proceed forward.  Soon enough you hit puzzles which require you to move blocks and complete some ancient circuits all to open the doorway to the next stage.  Rangi eases you into the mechanics by slowly introducing each new puzzle variable.  Initially you are just moving and turning blocks and crushing these conundrums with ease but just when you mentally check out on these challenges, the game adds a new element like enemies, moving spike walls, buzz saws and few more obstacles which adds some platforming elements to this game that shouldn’t work with the nav system…yet they do.  Moving and manipulating objects is all done by using the trigger on one of your wands to highlight whatever you are looking at and triggering it with Move controllers.  One odd choice that was uncomfortable throughout my play is that the click-turn buttons are on the opposite controller of the highlight wand, leaving the same buttons on the wand inactive for no real good reason as far as I could see.  I would have appreciated if the button on each controller acted the same. 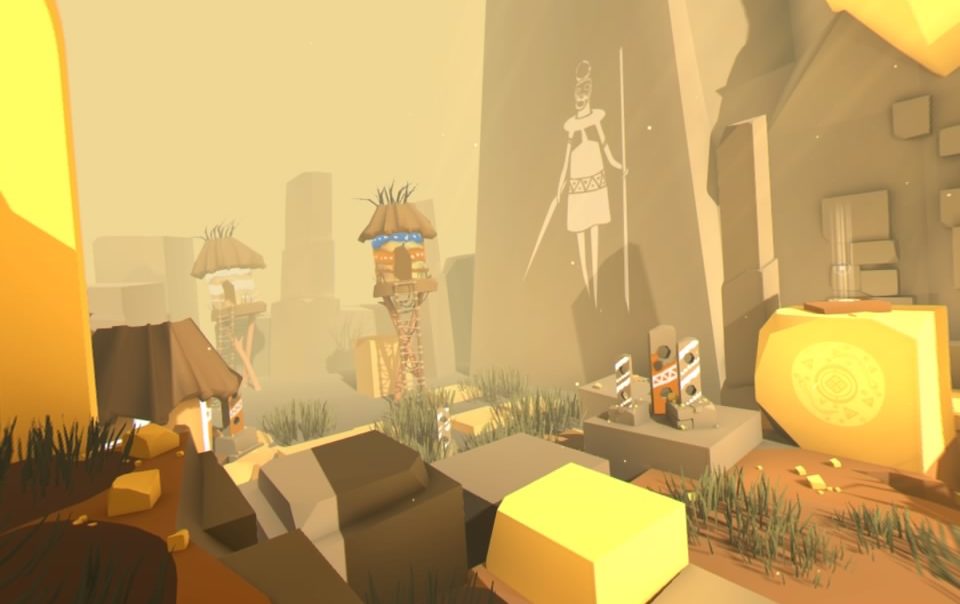 The setting is this game is very unique.

As I said, it’s a minimalist art style here, but that’s not a bad thing.  Environments are vibrant and alive using a cell-shaded look, and the scale used here is commendable.  Cliff sides, cave systems, temples and a host of other areas make Rangi constantly feel fresh.  Occasionally you’ll meet a giant spirit and VR hammers home just how big they really are, you literally fit in the palms of their hand.  Levels are large and only get larger as you progress, and the overall polish here is a breath of fresh air.  As this is based on traditional African lore, that has bled into the visuals making for an art style that we typically don’t see in gaming, let alone in VR.  The sound effects fit nicely here and don’t detract from the game, but another standout is the music which is beautiful mixture of traditional African melodies music that really adds to the atmosphere making this feel unique from other games of this ilk.

There are 22 separate stages here, which may not sound like a lot, but unless you are some kind of super genius, this will take sometime to get through.  The puzzles start of ridiculously easy and I expected that to carry through the entirety of the game.  This is not the case and just when I was about ready for a break from the monotony, the game switches things up by including new obstacles and much more complex puzzles, and than Rangi does that again, and again.  I got stuck a few times on a few of the latter puzzles, which have you teleporting on and moving giant platforms in what I think may be some of the largest scale puzzles I have ever played in any game.  Platforming elements are introduced which require you to move at a much faster pace while avoiding enemies, buzz saws and even a very fast-moving lava flow.  While the movement system is limited, the folks over at Digigo games have maximized it’s potential to make for a very fun and challenging game. 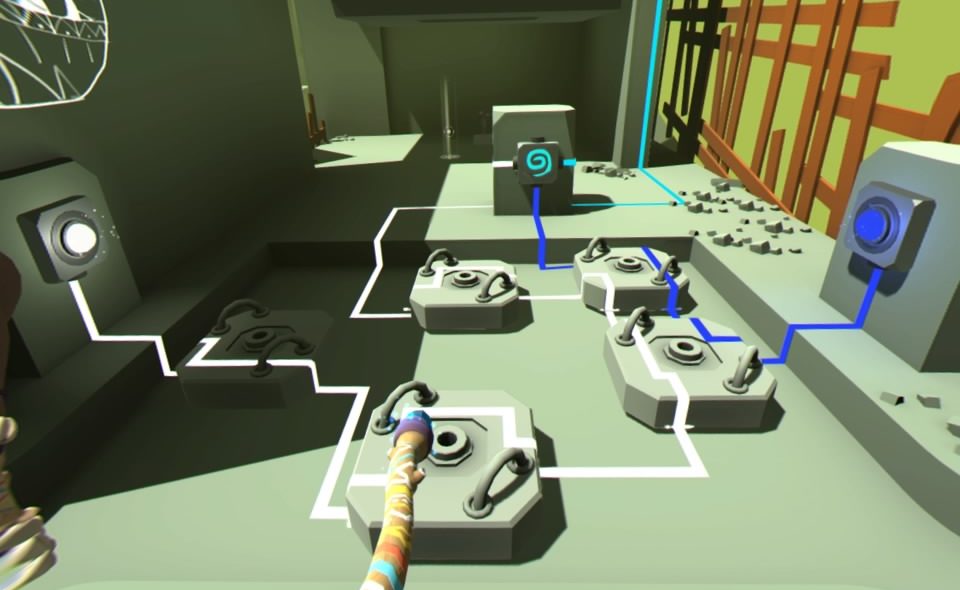 I did encounter a few issues worth bringing up though most are fairly minor.  When puzzles require you to move blocks around other blocks there is zero room for error and no extra space is given in many of these puzzles.  What I mean is that if you think you have moved a block as far as it can go one way to move another past it, if that 1st block is not 100% as far as it can go, then it will block the path of the block you are trying to move.  Once I became aware of that issue, it was easier to spot the longer I played, but it pops up throughout the whole game.  This is doubled down on by some slightly finicky wand controls.  When you want to grab an item, a beam of light shoots from your wand, highlighting what you are grabbing but, on many occasions, Rangi seemed to have a hard time keeping up with and tracking my movements.  Most puzzles allow you to take as much time as you like, but in the few that rush you, this can get really annoying.  Still trial and error will see you through to the end and though I experienced a few hiccups, I thoroughly enjoyed the 3 hour + journey. 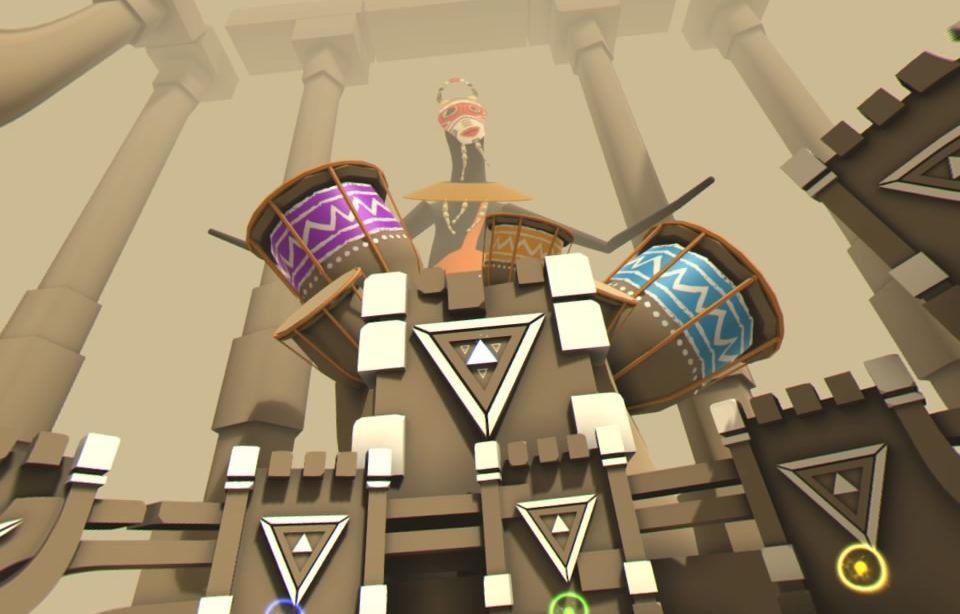 This guy is massive and the scale here is fantastic!

Rangi surprised me quite a bit.  I have played other games in this genre and they typically lasted no longer than an hour and nothing at the onset of this game suggested otherwise.  I never expected the puzzles to get as hard as they did and enjoyed the challenge they offered up. Even the story, what little there is, still had me interested enough to see where this game was going to take me.  Rangi still shows its mobile VR roots, but if you like challenging your brain, don’t let this pass by you, it’s a lot of fun!

What would I pay?  The $10 asking price is great for this.   It’s a beautiful game with a unique art style and loaded with a lot of content and challenging puzzles.

Digigo Games provided The VR Grid with a review code for this game and, regardless of this review, we thank them for that!