Racing and virtual reality is essentially a match made in heaven yet we PSVR users have seen only handful of releases in the genre and most of them are of middling efforts best left in the past.  The WipEout franchise has been around since 1996 and while it’s known for being a PlayStation exclusive title, I happened to have played the original game on the Sega Saturn some many moons ago.  The franchise has seen numerous releases in the last 22 years and seen dramatic improvements as well but perhaps the most important update has hit the franchise in the form of PSVR compatibility.  WipEout Omega Collection contains the complete content from 3 separate games in the franchise and managed to patch the entirety of this collection into VR making for probably the most visceral racing experience of my entire gaming life.

In VR, this is by far the most exhilarating view

For those that are unaware, the WipEout franchise takes a futuristic approach to racing as you pilot 1 of a bunch of hovercrafts, unlockable through the campaign play.  Races get insane with giant vertical climbs and drops as well as roadways that seemingly float in the sky.  Futuristic city streets offer some tight turns, boosts, powerups and weapons. Oh, and the speed at which you cruise through these courses is intense and offers a sense of speed that I haven’t felt before in VR.

With DS4 as your only method of control, this plays like most other racers.  Besides steering and acceleration there are options to turn even more sharply by drifting and even performing a barrel role in a jump will give you a boost upon landing.  Speed boosts litter each course and you want to run over as many of those as possible to give you a little extra edge.  Speaking of edge, weapons are also in the mix and provide a Mario Kart-esque type feel that is very balanced and most weapons require actual skill to hit to their target.  In my playtime I never felt like I was being hit too many times and the skill required to line up most shots makes each successful hit oh-so satisfying. 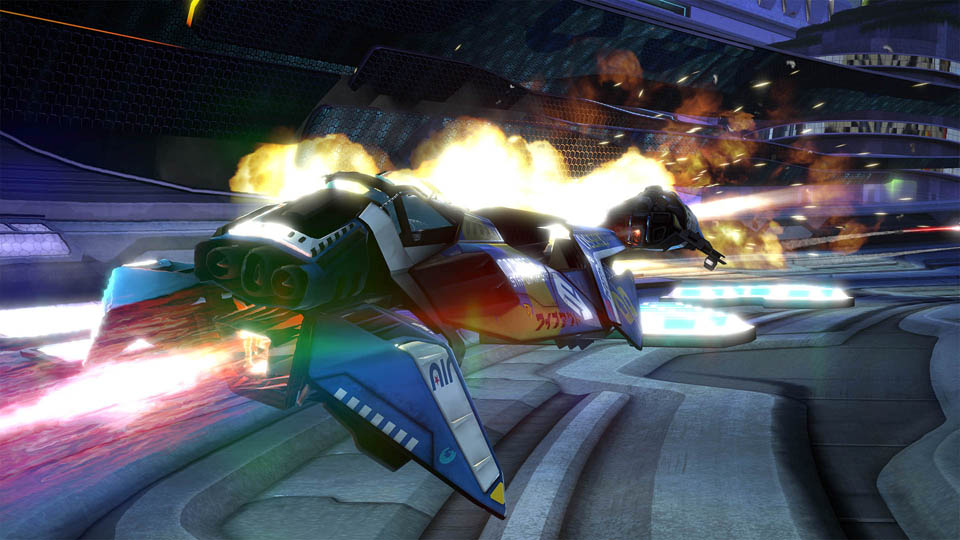 The weapons add a whole new dynamic to this racer!

Each of the 3 games available offers a slightly different take on the franchise whether it be the more insane courses in the 2048, the more combat intense battles in Fury or the tighter tracks in HD.  Each game is selectable from the menu and offers only 1 or 2 courses at the onset, though quickly unlocks more tracks (26 in total) as you meet the required minimum placing in the ranks.   As you place better, a variety of ship also becomes available, each with their different control statistics, though in VR the vehicle options seem to be limited to only 3 different cockpit views, which really isn’t a big deal as you’ll be spending most of your time keeping your eyes on what’s coming up next.  Speed, handling, thrust and shield are the 4 options each vehicle has and that choice really comes down to how you like the feel of your ship.

No matter which of the 3 games you choose, they all look stunning.  It’s the racing sport of the future and as such, courses take place in futuristic cities with a solid visual clarity that few VR racing games have.  The cityscapes are the bulk of the courses but come in a wide variety that makes each track feel unique.  Sometimes you’ll be traveling on city streets only to go off road for a bit as you slam against cliff sides instead of walls.  The courses look awesome in VR but what amazed even more was the subtler (and not so subtle) effects like getting behind a fellow racers jet stream or the bomb explosions which warps the entire raceway.  It’s those smaller touches that gave me the most ‘wow’ moments in a game littered with tons of ‘wow’ moments.  The cockpit is fully detailed and rendered beautifully and while there were a few occasions where it blocked my view of the track, specifically on jumps that turn, those moments only made the game more visceral.  It’s worth noting that should the cockpit view be a little too hard on your constitution, the traditional 3rd person viewing options are still available, though the first person view is by far the most exhilarating.

The sound is also fantastic with the hum of your engines greeting you at the start of each race.  When you slam into walls, it sounds like you are dealing real damage to your ride and jumps and landings and even just turning all elicit a sense that you are playing a AAA VR title.  The stress of hearing a competitor behind you as they are unloading weapon after weapon in your direction makes some for some very intense races.  The music is of the techno variety and didn’t too much for me, but that’s just my personal tastes and soundtrack definitely matches the gameplay.

Something really amazing in this title is the up 8 players that can play together in an online matchup.  My understanding is that there is cross play between VR and non-VR players and I have no idea if either user type has any minor advantages.  There is no mic support so you can’t trash talk the enemy, but in the spirit of being a competitive racer, this wouldn’t be a feature in a real-world race anyways.  In the matchups I have played I experienced absolutely zero issues making for what may just be the most solid online game to grace the PSVR headset.  Be warned though, I was crushing the campaign levels with relative ease when I jumped into the online play and was quickly put in my place as on almost every race I played, I fell behind the pack quickly and never caught up.  It was still an absolute blast, but for those looking to conquer multiplayer, expect to lose a fair bit before your skills match the pros who have been playing this for a while.

I did have a few, minor, issues with the game; the 1st being that the joystick at the center of your racer stays stationary during race time and I would have loved to see that mapped to the thumb stick just to add that little extra bit of immersion.  Secondly are the combat maps, which seemed to want to direct you towards damaging the enemy over finishing the race and I often myself ahead of the pack and just stopped to let them catch up so I could blast them to oblivion.  Lastly is that though cockpit view is the best way to play, it also makes the game slightly harder when compared to 3rd person so those looking stay competetive online may be better of playing in that less immersive mode. 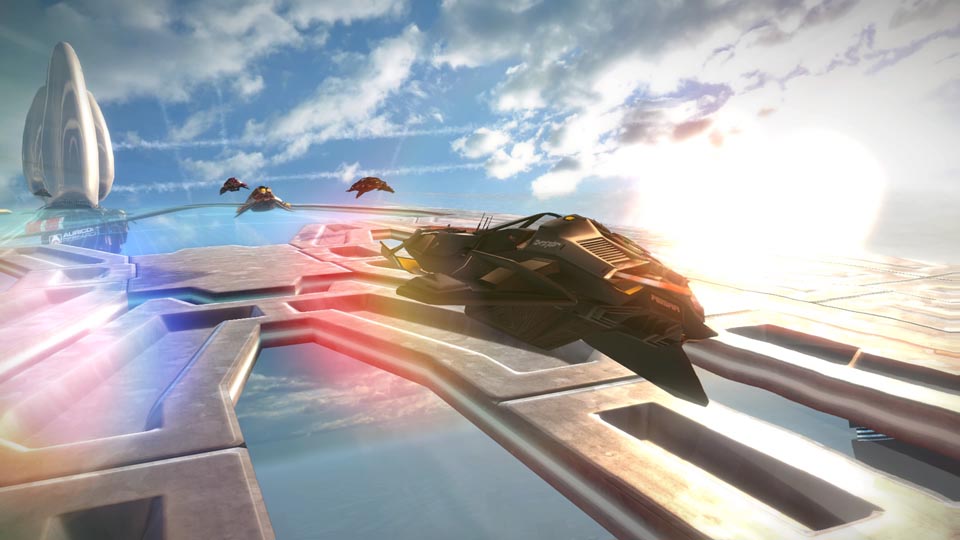 It really is this beautiful in VR!

This is an absolute blast in VR and for those that experience sim-sickness, there are a host of comfort options available to assist with that.  Thankfully, you can also turn those options off making for an intense, insane racer that just had me giggling in glee at all the chaos that was happening before me.  I found myself saying ‘just one more race’ way more times than I care to admit.  Once WipEout gets its hands on you, it never lets you go…and I’m happy with that!

What would I pay? I luckily swiped this on a sale for like $15, which is a ridiculous deal.  Even at the asking price of $40, WipEout Omega Collection contains a ton of value and is still worth it as it contains loads of content, seamless online play and some of the most stellar presentation currently available in VR!