Good Goliath is a charming little wave thrower that puts you in the shoes a giant just looking to be left alone after waking from a long sleep but constantly running into humans and creatures who will try and do anything to stop him.  To defend yourself from these tiny hordes, you must catch and toss anything you can grab back at your foes and maybe take out some of your surroundings as well. 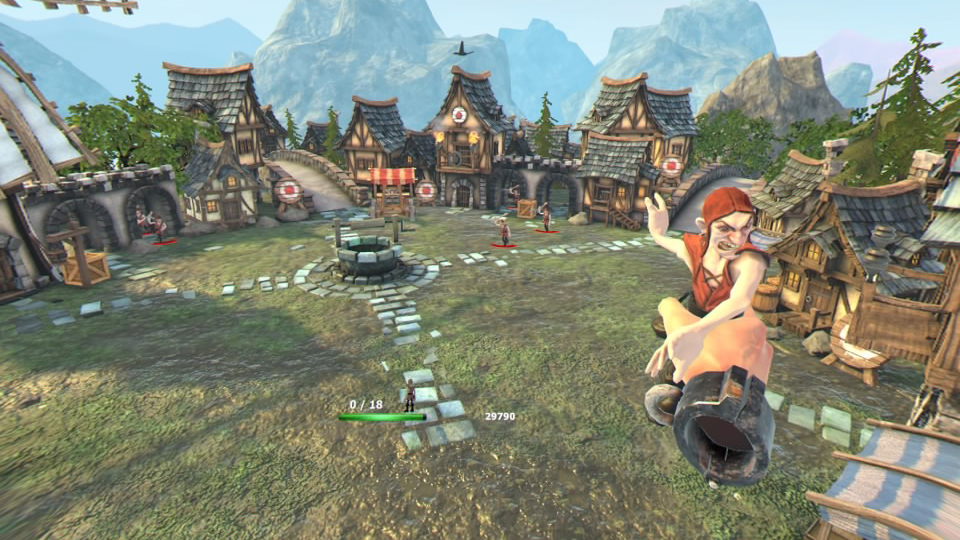 Catch em’ and toss them away!

As you are catching and tossing stuff, you’ll need 2 Move controllers for this one and maybe a little space as you’ll also have to dodge incoming projectiles as well.  The opening stage breaks down almost all the core mechanics with the goal being to knock out ‘x’ number of a certain type of foe per wave.  The peasants you’ll face throughout the campaign toss pitchforks, barrels and a host more objects your way with almost all of them being able to be grabbed and tossed back or knocked aside with the only damage you take being when any object hits your face.  You have a health bar which can be replenished by throwing something at a portly chef that may float through a stage at anytime strapped to a balloon.  Hitting that guy will have a large cake fly your way providing you with some much-needed health.  Some of the stages and bosses mix things up by having to hit select areas on larger foes or give you special items with dramatic effects like bowling balls or a hand-held canon that can fire just about anything you put into it with some deadly accuracy.   Each stage has checkpoints placed throughout it so should you fail; you won’t lose all your progress in that level.  The campaign is broken up into 3 worlds, each with 3 stages with the total time for my run in the campaign taking me roughly 3 hours though I did admittedly struggle throughout the game and was forced to replay stages multiple times. 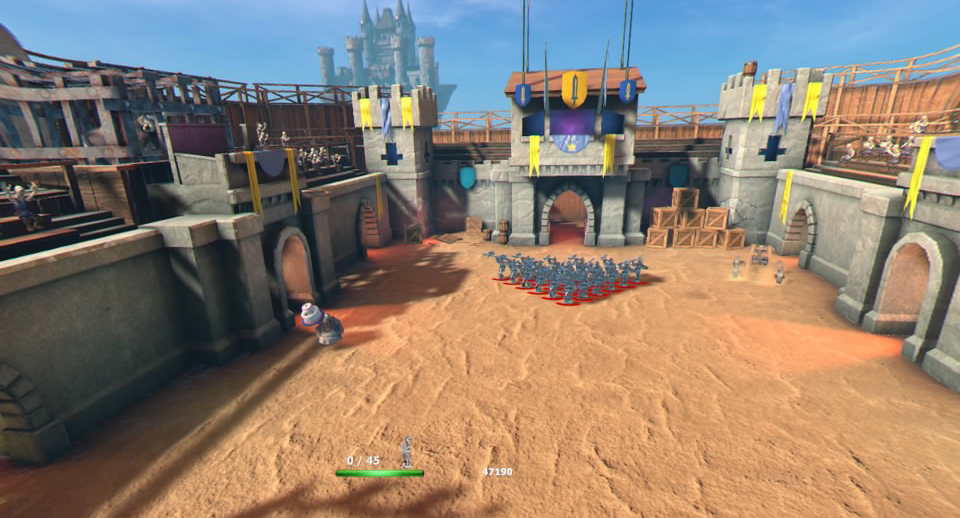 I would describe the overall look of this game to be on the charming side but with visual quality that is all over the map.  Each of the 9-stages looks decent enough taking you from small villages, castle grounds, ocean bays with skull shaped rocks and even a nether realm populated by imps and demons.  You can destroy certain areas of each map for a few extra bonus points, possibly revealing treasure chests that contain new skins for your hands.  The foes you face don’t look that impressive carrying limited animations, but they get the job done and should you catch one those little guys in your hands, you’ll see a lot of finer details.  The people fair much better than the demons in the last stage which just don’t look that good as they stiffly fly around you.  The star of the show is the boss battles which are nothing short of epic as each world’s boss is way more massive then yourself.  Whether it’s the giant king, huge octopus or the final boss (no spoilers for him) they take over your view and launch all manor of attacks your way.  They all animate beautifully and facing off against each of them was an absolute treat.  Some stages are a little more populated with stuff when compared to others leaving some looking a little bare bones but overall, I appreciated the aesthetic in Good Goliath, it’s just a little rough around the edges.

The entire story is narrated by a calm and soothing, seemingly elderly gentlemen, who basically explains what happens during and in between stages, filling in almost all the plot.  Music fits the stages perfectly and comes off as pleasant and light-hearted falling in line with whatever theme that stage has with some audio queues sprinkled in when enemies and objects of note show up. 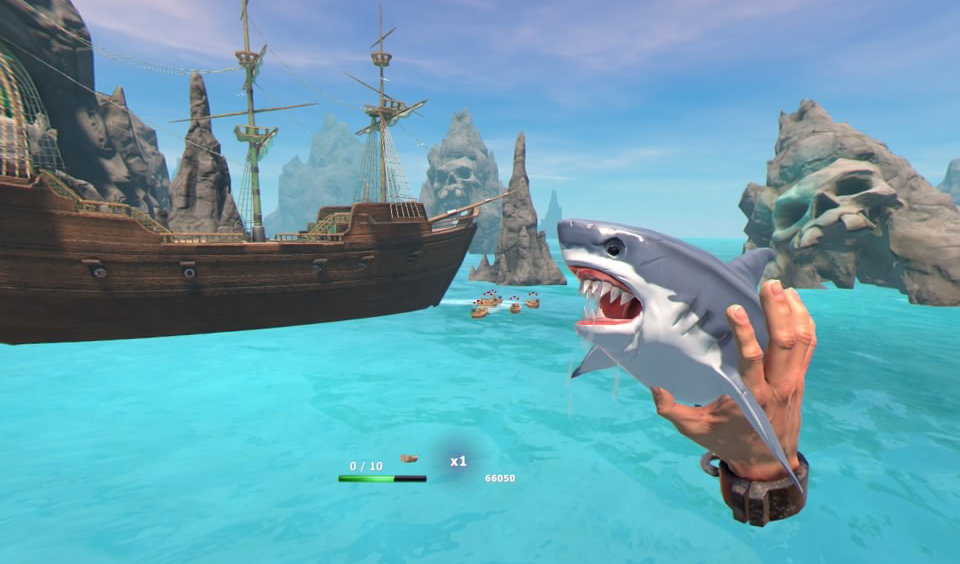 You ever kiss a shark before?

For all its simplicity, Good Goliath has some issues that seriously took away from the fun to be had here.  First off is that, being right-handed, I just couldn’t throw with my left hand causing a lot frustration but given that tossing stuff in real life my left would probably end in similar results, I can forgive that somewhat.  What I can’t forgive is the inability to pass something from my hand to hand which gets maddening when you have a powerful explosive device needed to take out a boss.  It’s a frustrating omission that not only detracts from the gameplay, but immersion as well.  The checkpoint system can also be a tad unforgiving as it doesn’t occur after every wave, but in between select waves meaning if you perish at the wrong time, you may have to repeat a couple of waves before you find yourself back at where you fell.  In every stage is a treasure chest which, when hit, will unlock a new skin for your hands, though should you fail any particular wave, you’ll have to toss something at the chest on your next attempt to keep it unlocked.  Those chests can sometimes be easily seen though are more often hidden somewhere in the stage and will require you to destroy something to reveal it.  That does add a little replay value for those looking for it, but as they are just skins, they don’t add anything else to the game.  My final issue is just how repetitious this can get and even after I finished the 1st stage, gameplay fatigue had already started to set in.  The core of this game is catching something and throwing it at whatever each wave asks you too. Stages get more or less chaotic with varying difficulty but even with the changeups the game tries to introduce, it just wears out its welcome.  That’s not to say the game is bad, but I think it’s best played in smaller doses. 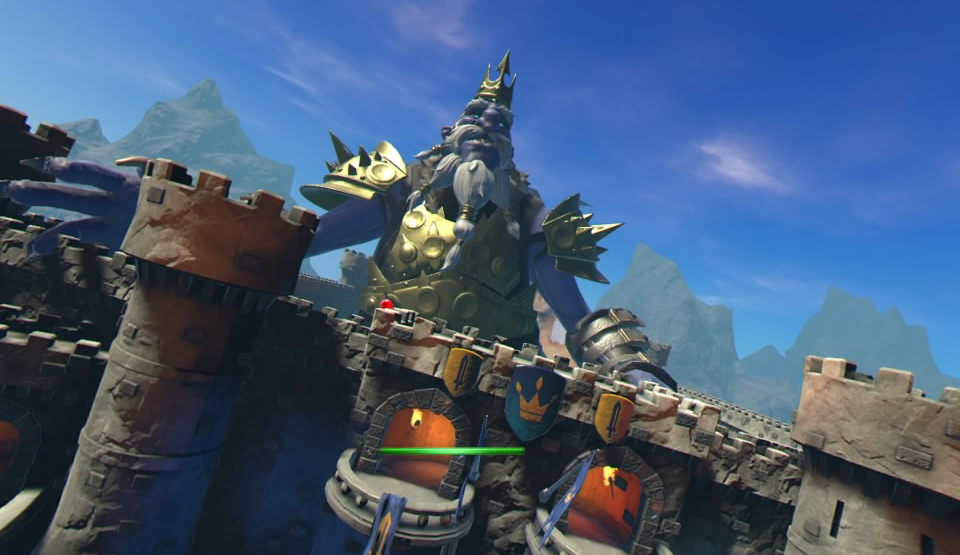 The boss battles are by far the best part of this game.

Good Goliath is an alright little distraction in VR that is marred by some heavy issues.  It’s pleasant to look at, quite fun in small doses and the game mechanics are easy enough that anyone can hop into the headset and instantly know how to play.  If you can get past the restrictive controls and maybe have a family member to 2 to share this with, this might be up your alley.

What would I pay? When the game works, it’s great but I found myself fighting with the controls and boredom just a little too often to recommend this at the $20 asking price.   If the dev’s address some of the issues I encountered then maybe the full price isn’t insane, but as it stands today $10 is as high as I would go.