Regardless of how you feel about this specific title getting the VR treatment, it’s always a good sign when a developer decides to port an older, lauded title to our headsets.  Doom 3’s original release was all the way back in 2004 to mostly positive fanfare thanks to it’s mixing up of the gameplay from the previous titles as well as it’s transition into a fully realized 3D shooter with nary a 2D sprite to be found.  Doom 3 really hearkened the franchise into a new era adding story and narrative elements that became a staple of the series moving forward and now we PSVR users get to experience all the horrors of hell on Earth….errrmm, I mean Mars. 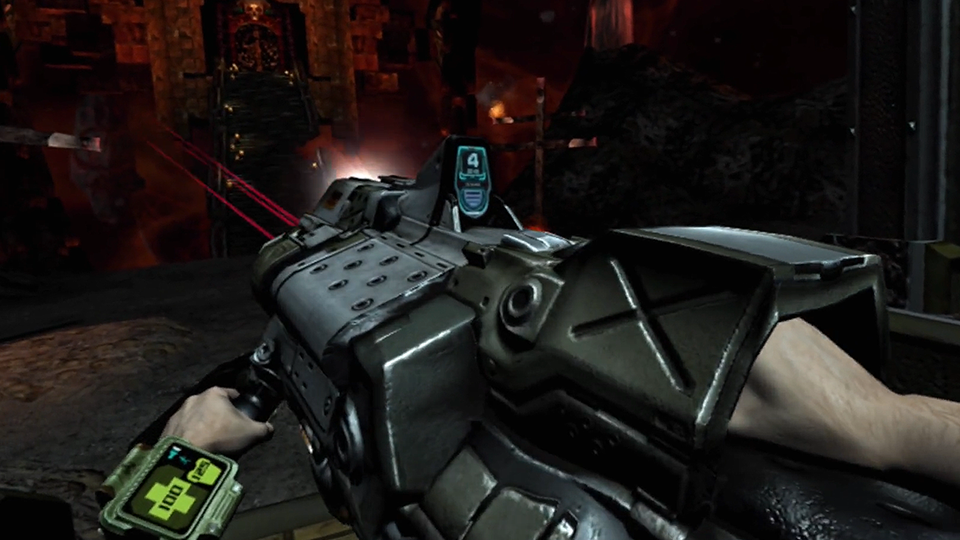 The big guns are even bigger in VR!

DS4 and the Aim controller is supported with Moves being left behind and I’m fine with that as the action in this Mars science facility can get frenetic and having to fumble with a control scheme not involving thumbsticks would hamper the experience here. Standard comfort options are available for blinders and click or smooth turning.  The opening “tutorial” section is nothing short of awkward as your fists float in your face and cut scenes run rampant, interrupting any sort of rhythm as you try and get used to the controls.  Once you get a pistol and the hell finally unleashes, the gameplay becomes much smoother and falls into a more standard fast-paced doom formula.  As the game was never built with VR mind, many interactions you might want from being in this world are missing as you touch computers by aiming your gun as if it were a mouse and using your PDA via a stock flat menu. That PDA will be your main source of info as you find other crew PDAs throughout the campaign and can listen to audio and written logs that flesh out the story up to that point, reveal passcodes for nearby lockups and allow access through doors needing special clearance.  You may spend some time searching for those PDA’s as they can be hard to spot, but rest assured the emphasis here is on the action.  Enemies will typically lie in wait ahead of you, though often appear behind as well or burst out of nearby cover so you need to always be on your toes.  Thankfully, you have a not-so-trusty flashlight which illuminates the path before you as well as run and duck options to help navigate the more ‘platformy’ sections of the game.  You’ll find ammo, health and armour pickups throughout the story as well as new weapons which simply require you to move near them to pick up and are cycled via button press.  Bottom line here is that while there are a few breaks in the action, non-stop killing of the demonic horde is always at the forefront of the game. 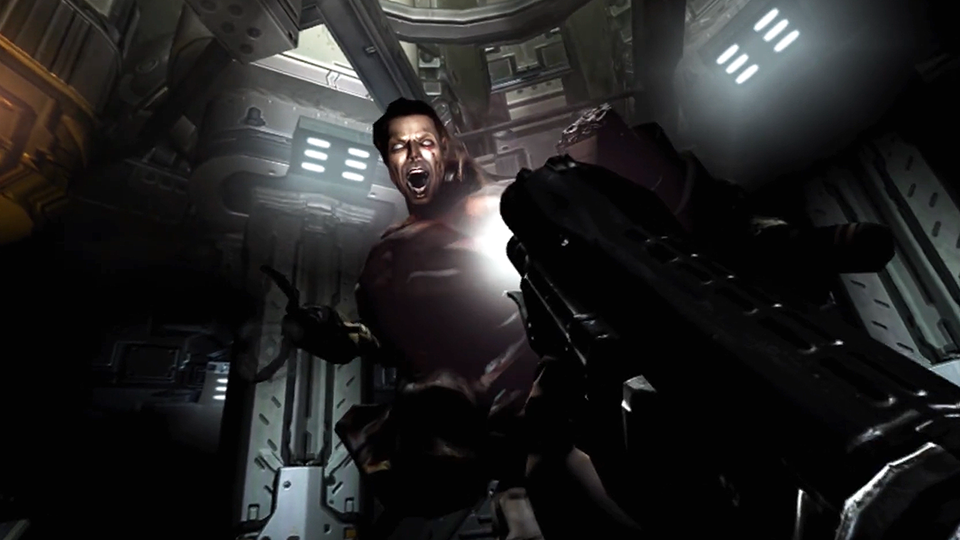 Despite it’s age, some of the enemies are just as disturbing as ever!

Doom 3 has been cleaned up for Virtual Reality, but still looks very much like the 2004 version save for few elements.  I don’t want to harp on this too much as this game is 17 years old and, in many ways, it shows, particularly in the character and monster models which have very sharp edges and some dated textures with the lower resolution of the PSVR headset making the game looking a little muddy at times.  Cutscenes also remove you from VR and are displayed as cinematic screens only which is especially annoying during games opening section but eases up after the 1st hour.  It’s in those transitions when you’ll see the resolution increase for cut scenes, then drop when you are placed back in the game and I’m not quite sure why there is such a dramatic change for an older game.  With that in mind though, being in the world of Doom kicks ass and having Imps, Demons Revenants and every other type of Hell spawn in your face is awesome.  The corridors of this facility are dark with the lighting effects this game was praised for back in 2004 still looking sharp even by today’s standards.  As this is a AAA title from yesteryear, the care and quality we expect from bigger games is still here with some huge levels extending over the 10+ regular campaign plus the 2 included DLC packs, Resurrection of Evil & The Lost Mission.  The facility is fully realized with crew quarters, mess halls and a variety of sections devoted to other ‘sciency’ stuff.  You won’t just be chilling in the comfort of your Mars home and will have to occasionally venture out the planets surface, trying to get from one building to the next while enemies assail you and your oxygen depletes.  No Doom game is complete without a visit to Hell and the underworld in this looks amazing with flowing lava falls, monstrous statues & floating rocks which make for some light platforming while you try and get to the big bad.  Shadow effects, weapons and your wristwatch have been optimized for VR, so your ammo is always on display with your watch providing your health and armor info.  While it does suffer from its age, Doom 3 is no slouch and still delivers a solid looking and expansive VR game! 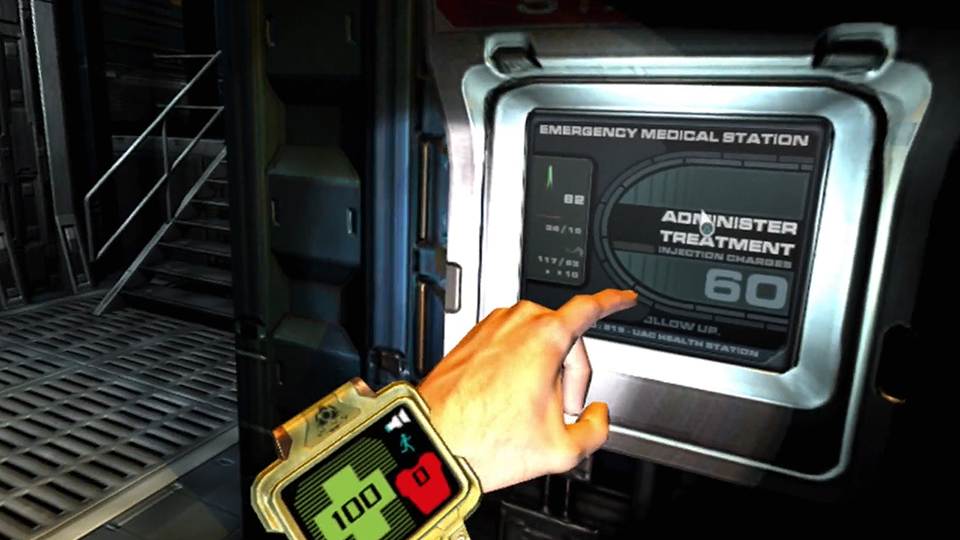 Interacting with computers feels off.

Doom was known for its more upbeat ass-kicking music tracks and while those are in here, Doom 3 looks to be a little more cerebral with long moments of musical silence adding to the overall suspense that never lets you breathe a sigh of relief.  Gun volume has been amplified giving every weapon a little more kick and I swear the monsters are even louder too, but that could just be in my head as they are just so much larger in VR.  The voice-acting in here is more cheesy than serious, but given just how ‘B’ movie this whole franchise is, I dug the over-the-top performances.  3D audio is also used quite well and was a life saver on more than a few occasions as enemies tried to surprise me from behind.   Presentation wise, just about everything in here delivers what it is supposed too, making for a fantastic, fully realize classic VR FPS. 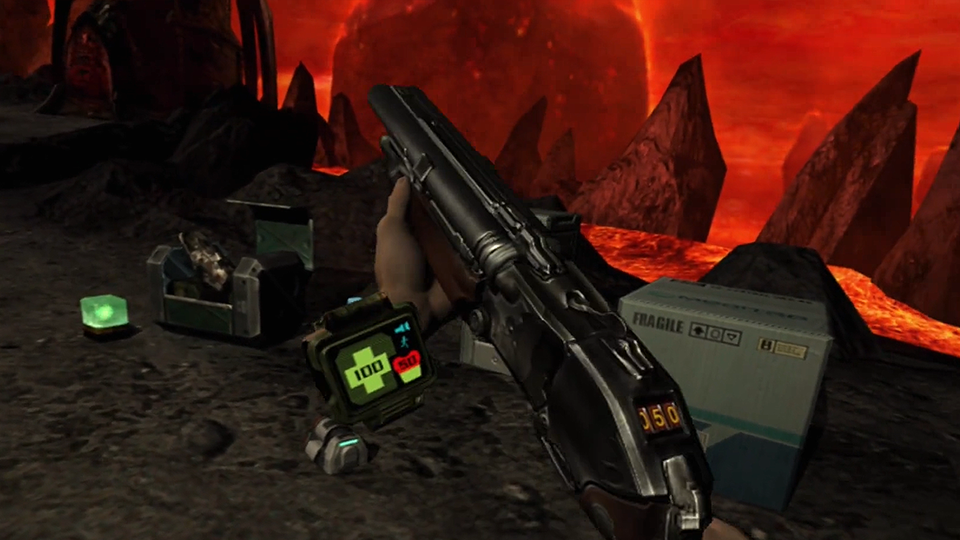 Of all the weapons in the game…none is more trusty that the shotty!

For those looking to scratch that nostalgia itch, this plays almost exactly like the original version of the game and that’s not a bad thing at all.  The extra immersion added by VR like letting you shoot around corners and having all your vital statistics added to your arms and weapons is a great work around to any kind of on-screen HUD.  Accessing audio and text logs through the PDA is nothing short of cumbersome as it’s just not organized that well and I found myself constantly scrolling through sub menu’s as I tried to track down an errant locker code though at worst, this is just a minor convenience.  I’d be remiss if I didn’t mention the Dr. Beef Quest version which does not play as well as this but managed to figure out a way smoother solution to keep cut scenes in VR and also gives you the use of both hands to mess around with your PDA and monitors.  Not having 2 separate hands in this can feel weird at times but using the Aim controller and feeling those 2-handed weapons in both my hands is a trade-off I’d happily make.  Other than that, and the dated visuals, this a faithful port that brought be back to a time when ass-kickery was still at the forefront of the Doom franchise, just with a little more suspense sprinkled in for good measure. 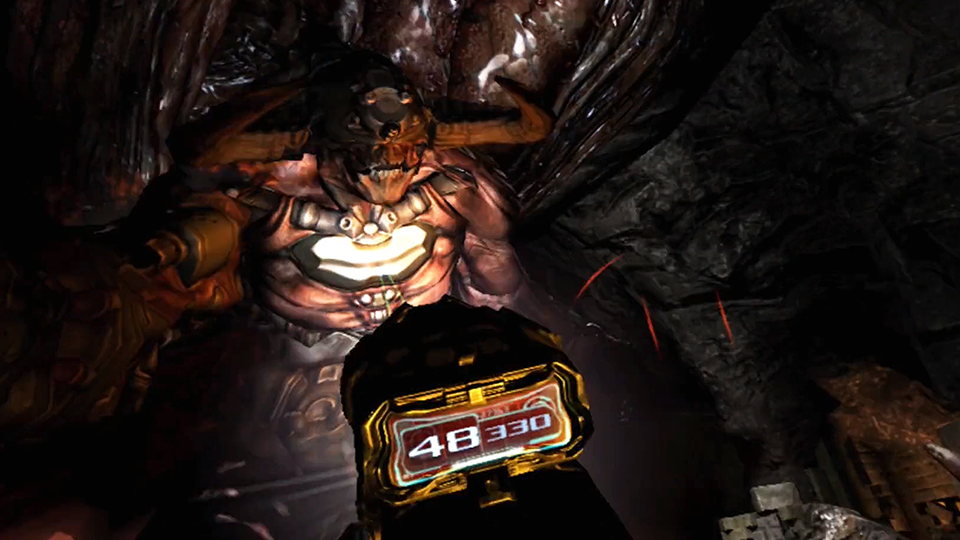 Doom 3, for myself, is a prime example of why older games can see new life in Virtual Reality.  This is pushing 20 years old and while there have been some minor improvements to this version of the game, that original 2004 experience is still here and… it’s still awesome!  I would love to see more ports of older games (where you at Bioshock?) and this has proved that VR makes for a better gaming experience and can revitalize older titles.  There is literally no good reason not to play this as it offers a substantial campaign, DLC and the classic Doom action we expect from the franchise. Aim controller kicks ass and while that, and the DS4 support, does remove a lot the expected interactivity of your hands in VR, holding a big rifle while holding a big gun in a game just feels fantastic.

What would I pay?  This $20 US and totally worth it.  I love the pricing on this as they could’ve probably charged a few more bucks without much complaint but decided to appeal to the masses and make this one of the easiest purchase decisions in PlayStation VR’s history.  Unless you hate shooters, you owe it to yourself to revisit this modern classic in Virtual Reality!

Bethesda Softworks provided The VR GRid with a press code for this title and, regardless of this review, we thank them for that!