Looking for a shoot-em-up challenge? Than look no further than Hyper Void.  A classic style arcade space shooter that doesn’t dare try and hold your hand.  Receiving the ol’ VR treatment when the PSVR launched, the developers thankfully applied that update to all the content, and regardless of what I think of a game, that’s always appreciated. 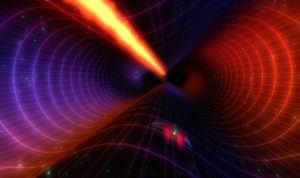 This game is an action packed trip!!!

The story backing Hyper Void is basically irrelevant, Supernova, alien attacks yada yada.  The point is you’re the only thing fighting these baddies off and if you fail than I assume that’s it for humanity.  You are armed with 3 types of weapons all which deplete when used excessively and take a few seconds to fully recharge.  Your one other ability is to phase left or right allowing incoming attacks to pass right through you.  It sounds easy enough, but it’s an ability that is difficult to master but necessary too in order to conquer the latter levels. Power ups as well assist you in your endeavours and thankfully so because as I said, it gets tough.

The action all takes place on single pane so left and right motion is your only option. What mixes that up is the levels themselves which turn into a variety of shapes so left to right now means circumnavigating all sorts of oddly shaped worm holes.  Navigating 360 degrees also messes with your left/right mapping and being upside down will reverse those directions.  Not to mention the balance between shooting enemies along with dodging attacks and you have a lot to think about.  What all this means is what starts off as a few quick, easy levels rapidly escalates to insanely challenging levels that will frustrate as much as reward you.

The visuals here are also pretty damned fine with jacked up frame rates and decent looking sprites.  The grab here is the levels.  Every stage looks different with a variety of shapes to navigate through and different enemy types popping up often.  My one issue here is certain levels have a pastelish looking background that tracks odd in VR which I found incredibly distracting.  The audio consists of some ramped up techno tracks that fit well the game.

With 28 levels to unlock as well as ‘Hyper Mode’ there is a fair bit content here but this game will try your patience. The difficulty ramps up quick and you are going to die… a lot.  I do appreciate a challenging game, but as far as the average gamer goes, a difficulty option feels missing.  The only other difficulty choice is the previously mentioned ‘Hyper Mode’ which gives you a more powerful ship, but with the ability to only get hit once (as opposed to 3 times in regular play).  Challenge is the name of the game here and if you can’t handle lots of deaths and lots of repeat plays than this isn’t for you. 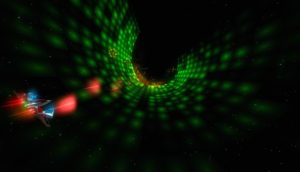 The gameplay stays pretty consistent, but the level design changes things up nicely.

I did notice that I found the game slightly easier in VR as opposed to not.  It was easier to track incoming enemies and objects and I had more success dodging everything.  Also VR just made everything significantly closer allowing for a much better look at all the enemies and backgrounds.  My final little note is that this game does feel a little repetitious after awhile, especially when you include replaying levels upon death and is best played in smaller doses.

Overall, what’s here works but its difficulty may scare off casual gamers.  It’s a nice looking game only made better in VR and it’s definitely worth a playthrough, just don’t expect an easy ride.

What would I pay? $9.99 is a great price for what’s here.  The story is shallow but the gameplay is decent and well worth the asking price.