While, it happened(happens?) again, we humans have gone lost the Earth, this time to an asteroid colliding and destroying it, so we cut our losses and fled in the hopes of finding a new home in the form of Project Solus.  A few exploratory vessels have been tasked at finding a new planet for the human race and you are one of those astronauts who is accidentally stranded on one of those planets after an unfortunate crash landing. Alone you must find a way to send a message off-world, while surviving the elements and uncovering the mysteries of your new surroundings. 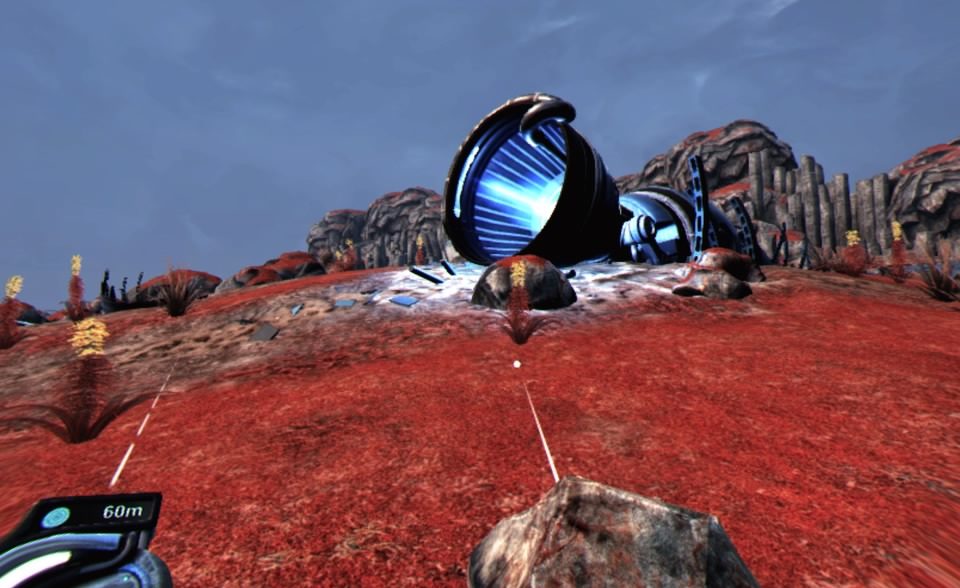 Fans of the ‘Lost’ TV show will be treated to a few references throughout the game.

The core of this game is exploration and you’ll spend almost all your time here doing just that.  The campaign is broken up into 5 islands, and, while this is an open-world type game, these islands limit just how much exploring you can do, which isn’t a bad thing given the linear tale being told.  Looking for parts to a communication device or the next piece of equipment you might need to smash through a barrier or a missing key will be the majority of the game.  If you get stuck, look around and odds are you will find the solution nearby.

Besides exploration, the other major game mechanic is survival, the opening moments/tutorial explain what you need to do just to live.  Eat, Drink and moderate your body temperature are the major factors here.  Your storage allows you to hold items so when you do find excess food, it’s best to take some with you, same with water.  The planets weather is dynamic and goes from extreme cold to blazing heat so depending on what time of day you travel sets about its own difficulties.  Added to this are rain and snow storms, and tornado’s which can do a lot more than just make you a bit chilly.  All of your vitals are monitored by your PDA device which is also used to sleep, analyze items and keep track of objectives.  It all makes for a more immersive experience with caveat being that you are looking for this kind of survival game in the first place.  The devs have done their homework and for those looking for less (or more) of a survival challenge you can play from anywhere from 0% difficulty to %400 difficulty making survival anywhere from non-existent to the forefront of every single action you take in the game. 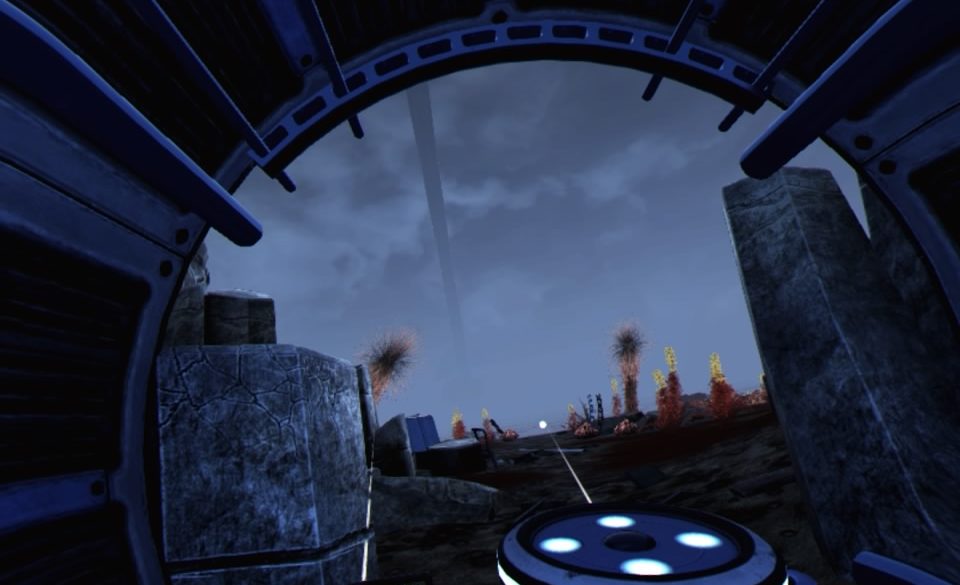 If you see this, you better find shelter…FAST!!

In VR the controls here make some positive and negative choices and hope the negative will be remedied in a future patch.  As of right now, VR is Move controllers only, but don’t fret as free locomotion is here by with a few option to tailor the experience to your needs.  Jumps are necessary to traverse some of environment and thankfully you can jump in VR as well adding to the sense of freedom the game.  All your vital stats are handled by a monitor in your left hand while your right is used to interact with objects, levers and buttons.  It all works great with 2 major flaws, the first being  snap turning.  Giving VR users full freedom on motion is great, but an option for free turning is desperately needed as veterans of VR are looking for every bit of immersion they can get out of these titles.  Secondly is the lack of a backward button, meaning you can only walk forward, which is fine, but walking to close to something means you’ll to spin around 180 degrees and readjust your position…it’s annoying Besides that though, the game controls remarkably well and I never had any other issues worth mentioning.  There a few options as well that increase your characters mobility (teleportation, look where you want to steer yourself) and overall after an hour or so of gameplay I became comfortable with the control scheme

The Solus Projects looks pretty good all things considered. It’s an alien world with a familiar feel.  The weather patterns, though a little more erratic than earth, are stuff we have seen before, the landscape itself is thick with alien plants and vegetation as well some odd rock formations and a gorgeous alien sky which is a constant reminder that you are in a strange place.  The game defintiely takes a visual hit in VR, especially noticeable during the brighter sections, but it doesn’t look awful and a few sights still offer a sense of awe.  Each of the aforementioned Islands is joined by a cavern system linking them all together as well as some ruins from the planets previous inhabitants.

I love the audio presented here with music being executed almost flawlessly, epic moments carry music that adds that intensity while lighter, more melodic music accompanies you while just exploring during the daylight hours.  The ambient, 360 sound is also great and, when combined with VR, makes the world sound alive with wind gusts, rustling bushes and the sounds of smaller animals (though never seen) making the world sound alive.  Listening for a nearby stream or something odd in the distance could be the difference between survival and death. 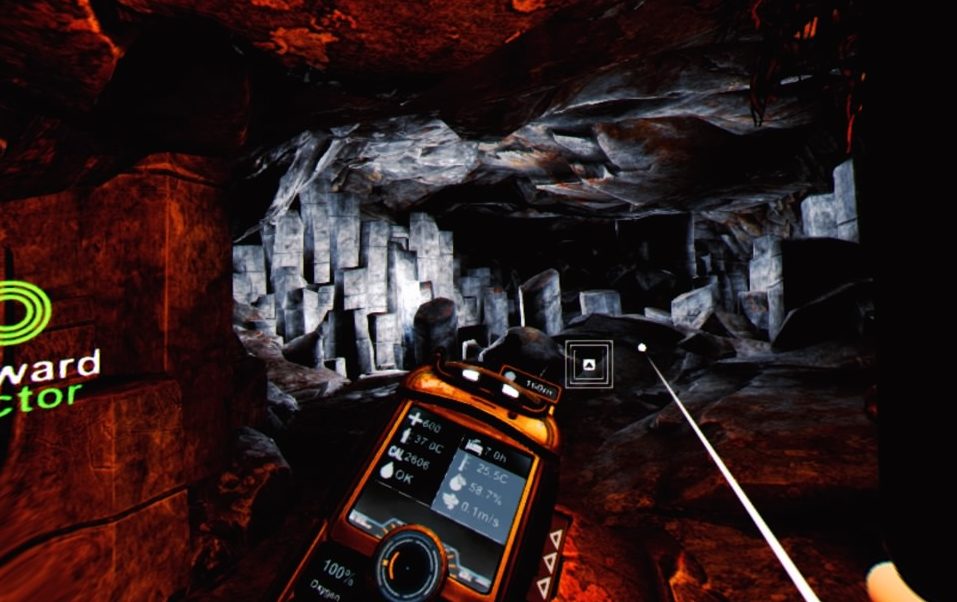 The cave system here contains some of the more beautiful and deadly moments in the game.

While the game encourages exploration, and forces it on occasion, this is ultimately a linear tale.  Broken up into 5 islands and whole bunch of smaller areas,  each unravels a portion of the mysteries surrounding you as well as pushes the main plot forward (getting off the planet).  Objective markers show where you need to get to next, and if your playing just for that, then I don’t think this will take you more than 12 hours to beat and could be beaten in less if you had the right skills and knew what to do.  Taking your time however and checking every nook and cranny could reveal items or buffs that could aid in your survival.  I found I explored a lot in my early goings of the game but as the story progressed I became more focused on seeing it to its conclusion than increasing my heat resistance by 1%.  In fact, after about 4 hours of play, I dumbed down the survival elements as low as I could just to minimize the distractions taking me away from the plot.

If you can’t tell by now, there is no combat here and any weapons you do pick up in the game are just tools needed to solve a nearby puzzle.  The puzzles themselves are also simple, with most of the time being required to find a nearby item to conquer them.  That said there are a few brain teasers scattered that did have me stop and think for a minute or 2 and while the game is linear, there was more than 1 occasion where I just felt lost, though more often than not, it was my own idiocy holding me back.  The single player campaign does feel a little bogged down at times by the amount exploring you may need to do, though I found just taking a break and coming back a little later remedied that somewhat.   The only other issue I had was the propensity of food and water found throughout the world, pots of stew show up so often that it actually does a disservice to the survival elements rendering them almost moot. 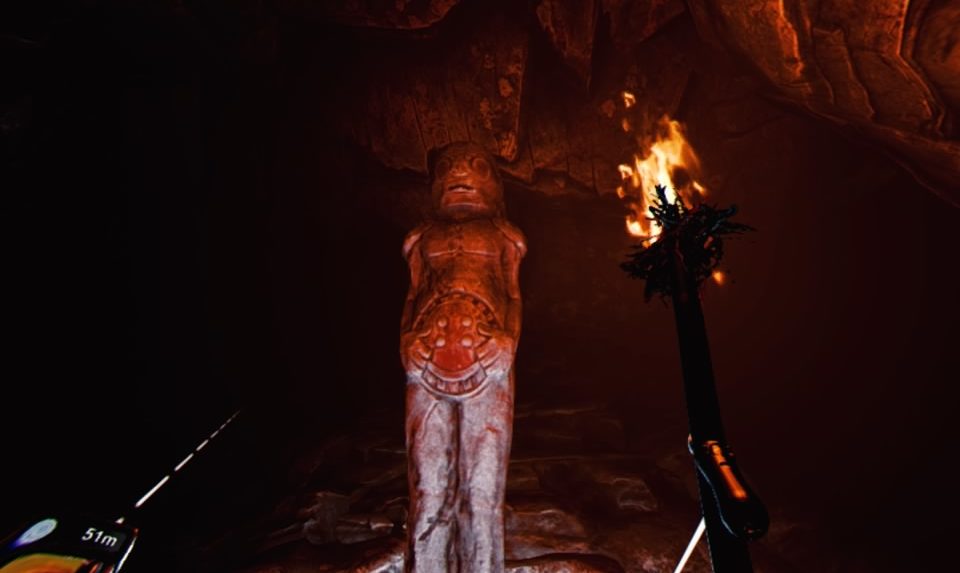 I really enjoyed what The Solus Project brought the table and the story, though slow to start, engrossed me immensely with some big reveals around the 4 to 5 hour point hooking in me completely, and as fan of the Lost TV show, I loved the references scattered throughout the game.  What’s presented at the onset is only expanded through the stories progression and while the survival content became more of unwanted distraction, it’s still a solid mechanic that may appeal to those looking to ramp up the challenge.  For everyone else though this is a steal of a deal, even with the issues I mentioned, I still had a lot of fun playing through this and hopefully a patch or 2 may remedy a few of the issues I had.

What would I pay? $20US is a steal for the content provided.  It may feel a little extended thanks to the reliance of exploration without hand holding, but the mechanics and gameplay are solid and the narrative told is undeniably intriguing.

Grip Games provided theVRgrid.com with a review copy of this game and, regardless of this review, we thank them for that!