Blade & Sorcery rocked the VR world almost 3 years ago bringing about a visceral sandbox combat system that lets you dispatch your foes using a variety of weapons and magic.  The PC version is still labelled as being in early access with Nomad offering up a comparable sandbox experience with the (somewhat) all new ‘Dungeons’ mode that has you navigating through a large map full of enemies out to stop you. 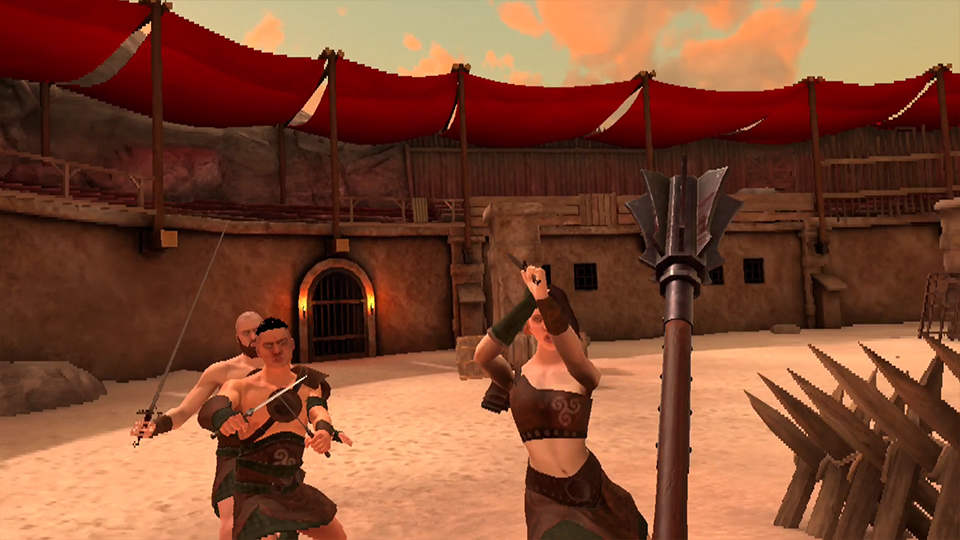 You know what you gotta do!

It’s all about killing fools in VR and you can do so however you want thanks to a wide array of weapons ready to equip as soon as you start the game.  With 4 inventory slots available, 2 on your hips and 1 over each shoulder, you can mix and match 4 different weapons or maybe bring a health potion along with you in case you’re worried about taking damage.  You can choose from 4 different arenas, each offering different levels of verticality and even some dangerous items in the environment that can help deliver some damage to your foes and yourself if you aren’t’ careful.  It’s a full-blown physics-based combat game not unlike GORN though with much more emphasis on realistic combat with a little bit of magic thrown in for fun.  Enemies will come at you using a select number of scripted attacks so paying attention and being wary will allow you to easily defend their assaults, at least when it’s 1 on 1.  Should you face more than 1 combatant, things get a bit dicier as they can easily surround you and have no qualms about attacking at the same time which is made even trickier when ranged fighters show up, tossing magical fireballs or firing arrows your way.  There are a couple modes to choose from, the 1st being Arena which has you customizing the difficulty, the amount of enemies you face and how you face them from 1 on 1 action to an endless supply of foes or even stand your ground as a team in ‘Warzone’ (with bots) against an opposing AI group.  The 2nd mode the ‘Dungeons’  which currently only has one map available though each run is semi-procedurally generated so every time you play will have you running through familiar areas, but in a new order, fighting 1 or more foes at a time up until the final battle with a horde of enemies steadily coming at you.  Not in the game just yet is Crystal Hunt which is slated to be added next year and is supposed to offer a progression-based dungeon crawler where you can level up and purchase new weapons.  All the physics-based combat Blade & Sorcery is known for is still here including those environmental obstacles like pits and crevasses that may require you to jump over or scale up ropes to bypass them, adding a little depth outside of the combat.  The difficulty on Dungeons mode as well its length can be adjusted before you jump in with more maps and modifiers promised in the coming months. 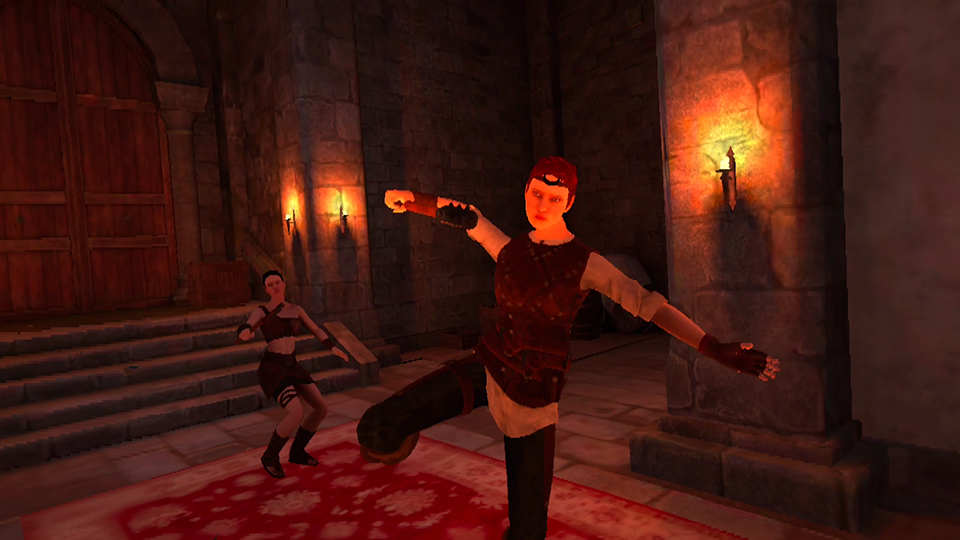 Watch out for the dreaded ‘Superman Stab’!

Nomad looks decent for the Quest 2 headset though it’s obvious where visuals sacrifices were made to pack this into our stand-alone device.  The complete core Blade & Sorcery experience is here though it comes with some caveats, the most noticeable being the downscaled visuals (which still look fairly good all things considered) and some fairly intrusive foveated rendering.  Texture quality is ok for the Quest headset considering the scale of the arenas and the fact this is running a full physics engine.  Foes come in the male and female form wearing a variety of classic armour styles found throughout the ages and are equipped equally so with that armour behaving exactly as it should, though the same can’t be said for your enemies.  The physics at play can be very impressive as weapons may bounce or deflect off armoured areas but still cut deep when they find flesh, making for what can at times be a visceral experience.  There are options to toggle gore and so on with said gore and blood matching the generic looking models though should you being feeling extra violent, you can turn on the option to dismember foes which is always a good time.  Much of the environmental lighting is static with your weapons and the NPC’s all having a little dynamic lighting which, when I noticed it, was a nice extra bit of realism over what can oftentimes look like a very simplified game.  I don’t mean to be harsh on the visuals as getting this game to run on even a quest 2 is a feat unto itself, but those expecting PC levels of visuals should dial back those expectations a bit as this does look like a dumbed down version of the PC classic with rampant pop-in & flickering.  Due to the physical nature of the combat, unintentionally hilarious moments can occur as bodies contort in weird ways or NPC’s get in each others way or just fly off into the distance thanks to a weird collision, but none of these moments ever ruined the game and if anything, provided some light comedy. 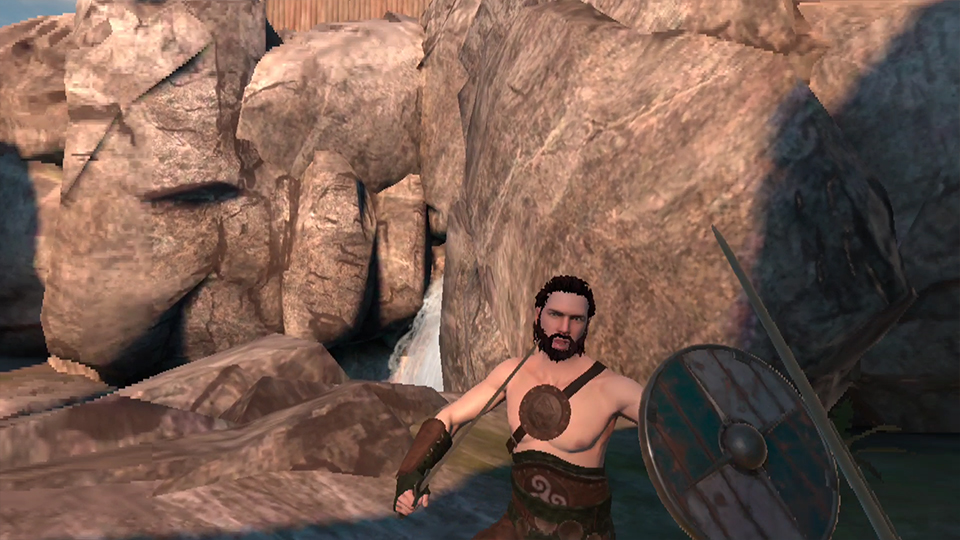 Sound design is on point with some solid 3D audio and great battle sound effects that serve the combat well.  Playing the arena mode in any map is a seamless audio experience with enemies spouting a quick battle cry before they attack, grunting and groaning when they swing or take damage.  The same can be said for the Dungeon mode, but environmental audio queues can be erratic, causing the sounds of the ocean to suddenly kick in when you get close, but take one step back and they cut-off creating some awkward moments as you navigate castles & catacombs. The enemies you face (in Dungeon mode) will also react to the sounds of your steps and weapons making stealth kills all the more satisfying and luring foes a little easier as I bashed my shield to get their attention.   All things considered though, the presentation is alright, and I expect some post launch patches to address these minor, but frequent issues.

As I said, packing this game onto the Quest platform is impressive, though the game does suffer from the lacking power of even the Quest 2, sorry Quest 1 guys, this won’t work for you.  Even beyond the downgrade in visual quality and sometimes erratic audio, I encountered numerous performance issues which did hamper my fun.  For starters, frame rate would drop during the Dungeon mode in the larger areas, when facing multiple foes.  I also experienced multiple crashes that forced me to restart the game, sometimes taking multiple attempts before the game would launch.  During the ‘Warzone’ bouts, enemy AI acted erratically, pacing back and forth or just staring at me while others battled each other with little acknowledgement of my presence or not spawning at all forcing me to end that round and start anew.   Enemies would occasionally fail to notice me, even if I was poking and prodding them while others would acknowledge my presence before I was even in sight them and not making any noise.  Some enemy attacks have them jumping at you in a superman punch type fashion, colliding with my body and causing a lot of collision issues even if I did block the attack with weapons sometimes flying out of my hands or theirs only to disappear making this game feel quite janky at times.  These issues were frequent in my play, but minus the crashing, never broke the game or made it unplayable and if I experienced any of these annoyances, they disappeared just as fast, and I was right back into the action taking out anyone in my way. 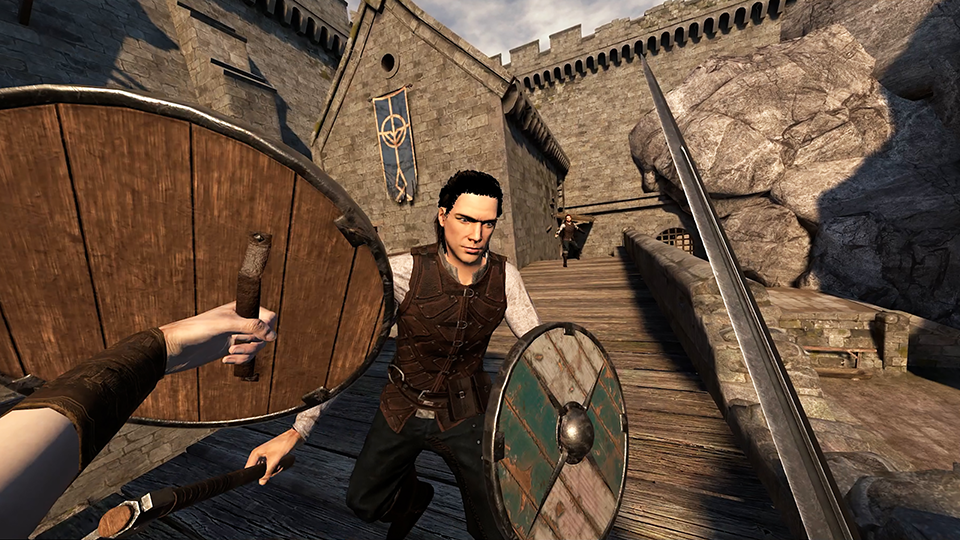 Blade & Sorcery Nomad succeeds much more than it fails, but by no means is the port perfect offering a fair bit of jank to accompany all that realistic combat.  Fans of games like GORN and even Saints & Sinners should relish the physical combat as, when it works, it feels great and offers up some very satisfying encounters.  Toss in the current mods as well new ones to come down the road, new maps and whatever else the devs come up with and you get a brawler that’s a lot of fun but feels a little shallow at launch though hopefully that will change when get to play ‘Crystal Hunt’.

What would I pay?  This is $20 US which honestly has me excusing many of the issues I encountered as I expect many of them to be fixed and like I said, when it works it’s a ton of fun.  If you’re down to mess around with some physics-based combat, experiment with all the different ways to kill your foes and don’t mind waiting for more content to come, than this is worth your time and money.

Warpfrog provided The VR Grid with a press code for this title and, regardless of this review, we thank them for that!