Upon loading up Windlands, a message appears stating that unless you have discovered your VR legs then it is advisable to play in short five minute sessions until you get used to the locomotion gameplay.  Windlands is about soaring through the air at high altitudes and swinging from treetop to treetop so I could understand how someone not used to the mechanics of VR might just find their lunch on the floor after just a few minutes play. 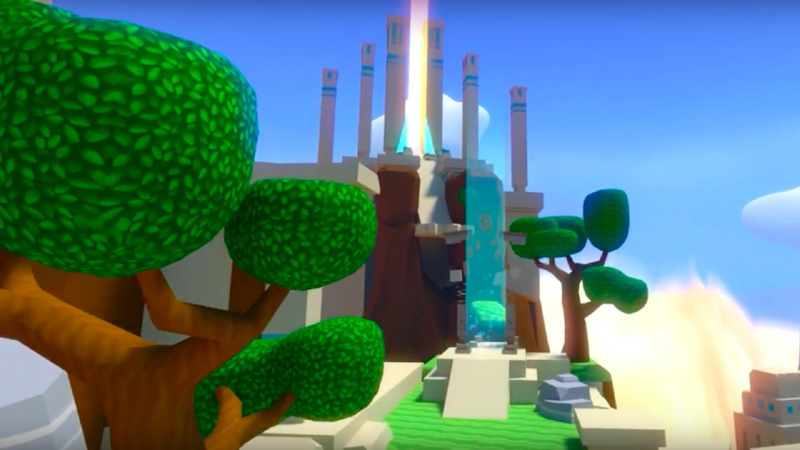 If you couldn’t tell, up ahead is the checkpoint portal

With that being said, the option screen does give a varied amount of choice when it comes to comfort and ways to minimize and tailor the user to limit the motion sickness.  As in games like Robinson(review here), left and right turning can either be a smooth continuous motion or in segments. Literally after a few seconds of the smooth movement I felt rather queasy but the segment movement was effective in combating this.

The story is set in a kind of lost ancient civilization. An introductory sequence, a bit similar to the Zelda games, details how Titans used to rule over the land with crystals and tablets needing to be discovered to awaken them. Once these crystals are found, they then open up other realms to explore. There are three in total, namely Jungle, City and Sky. There isn’t much in the way of a narrative story to concern yourself with, but it’s refreshing that this kind of title does at least have a storied purpose.

For anyone familiar with Jump(review here) on the Samsung Gear VR, then you will instantly have an idea of the game mechanics.  As mentioned above, you will be doing a lot of soaring and swinging.  The first few minutes of the game introduces you to the jumping aspect, once you press the X button then you literally launch skywards. The first few times it is very easy to overcompensate and plummet to your death, which you will do….a lot!  Once in mid air though you can slow your descent and land successfully. Another option to get about is the wall jump which lets you scale high walls by pinging between. Soon though you discover the two grappling hook arms which then form the crux of the game. 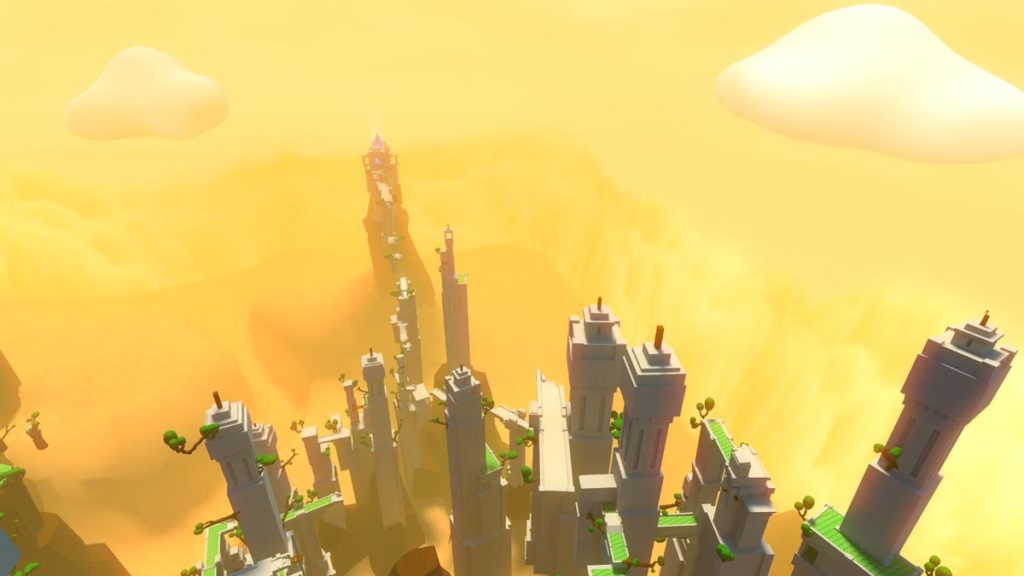 The scope and scale of these levels is both impressive and daunting.

Using the left and right shoulder buttons of the Dual Shock controller, these shoot out and attach themselves letting you either climb or swing. They are most effective when used one after the other, thus doing your best Tarzan impression though the landscape. A recent update has added Move controller support which means that each grappling hook represents a controller with the trigger buttons launching your wires. Actual movement is achieved by the other buttons on the move controller including strafing. Its quite challenging at first to move how you want to as its quite different, here is where a thumbstick on a move controller would be incredibly useful. On many occasions, instead of moving right I pressed the wrong button and found myself respawning to an earlier point which was a bit frustrating. After some time though, coupled with the effective way each controller moves the corresponding hook, you’ll soon be performing like Spiderman. This is certainly the preferred and more intuitive way of swinging and feels very natural when in action.

On the normal difficulty setting the grappling hooks only attach themselves to bushes whereas on the easy setting they will attach to any solid surface such as wall, mountain, structure etc. I recommend Easy mode on your first play through, and once you become an accomplished swinger then switch to normal. The game scales high altitudes and found myself falling to my death on numerous occasions on normal difficulty because that solitary bush was just an inch too far away.

It’s good though that dying isn’t a chore and does not let frustration set in. There are quite a few checkpoint saves dotted about in the form of shimmering portals in statues and once stepped through they become your current spawning point.  Similarly, a press of the triangle button instantly sends you back there should you happen to find yourself a bit stuck. The graphics are simplistic and blocky but bright and colorful and employ a unique character to them. The sense of height as you swing and jump your way ever skyward to reach that next crystal is exhilarating. As is reaching the highest summit and staring way down beneath at the pretty vistas, realizing how far below you were just a few moments ago, and how far you’ve come. The landscapes feature an excellent draw distance and always pans smoothly as your move your head around.  Windlands now utilizes the extra processing power of the PS4 Pro and so the graphics employed here are very sharp and crisp with a noticeable upgrade compared to that of the standard PS4.

Accompanying the visuals, the soundtrack is mainly a tranquil affair which just plays nicely in the background, it may be a bit bland and nondescript but it suits this perfectly. 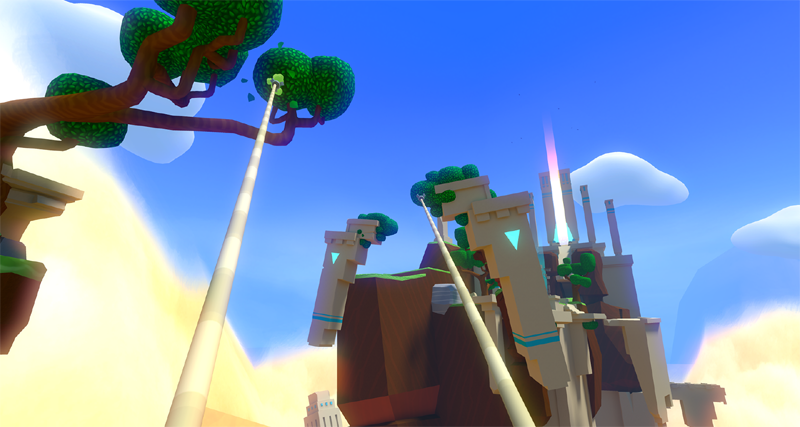 Attaching hooks to the many bushes scattered throughout the levels

The sense of freedom it provides is refreshing but after a while you do start to ask yourself if this it, and yes it really is. The different realms just represent three different themes but with exactly the same gameplay so I think that this is a title best played in short repeated sessions. Variety is not its strong point. There are no real puzzles in the game other than how to traverse the map and figuring out how to get from A to B.  The other negative is that you will spend a lot of the time looking directly up as you attempt to hook onto a tree for example directly above you. This can feel quite uncomfortable with the headset bearing down heavy upon your face while holding your neck back.

Windlands is highly enjoyable to play, it does take a while to get used to the swinging mechanic but once you do the sensation of flying from tree branch to tree branch and scaling even higher is a great feeling and only one which a VR experience can achieve, its just after an hour you may wish to remove the headset and have a lie down to recover from it all.  It also contains around 6 or 7 hours of gameplay which for a PSVR launch title is rewarding.

What would I pay? £18.99.  I think the price point of is set just right, it will be a game I would return to regularly, continue my exploration, and find all the collectibles.

Psytec Games provided theVRgrid with a review copy of the game and, regardless of our score, we thank them for that!