In the last few months, we have seen a few new shoot ’em ups grace our various headsets with Rhythm ‘n Bullets being the latest to arrive on the PSVR headset.  Like the title says, this is a mix of genres as it offers a sampling of a bullet hell shooter and a little rhythm combined with some very retro graphics. 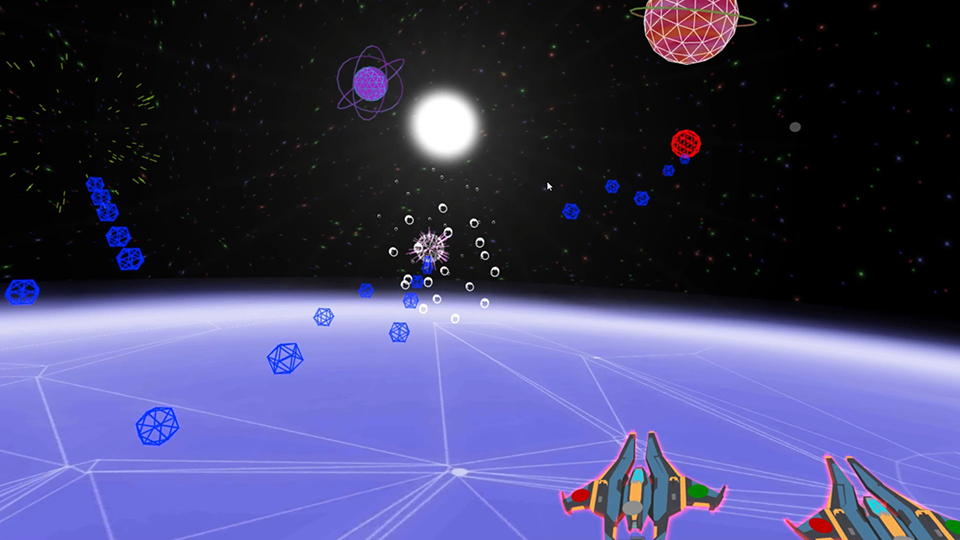 This stage gets crazy

You’ll need 2 Tracked controllers (Moves) as each hand will control a ship that must defend the orb in front of you from approaching bad guys.  Where things get interesting is that each ship’s shots can alternate between 3 colours with the enemies coming in those same colours, so you need to switch your bullet types to match them otherwise your foes won’t take any damage.  Enemies come in a variety of forms and come at you slowly, so it starts of easy enough though by the 3rd stage, you’ll be frantically trying to balance all the games mechanics.  Power-ups will pop up from time to time, amplifying the power or frequency of your attacks temporarily and even slowing down time for a few seconds, allowing you to catch your breath and clean up the rabble that could be overwhelming you. Bosses will require all the same tactics as the enemies you face up to that point and will also need you to deflect shots to weaken the shields defending their vulnerable core with a shield ability that allows you to return non-colored shapes with all of these mechanics being taught in quick tutorial.   All of this is done to some retro electronic tunes and where that rhythm aspect comes into play is that, to get the most points, you need to shoot in time to the beat, a task way easier said, than done.  There are 3 stages to get through in the campaign with an additional endless mode which contains 2 more stages and has an attached leaderboard for those looking to prove their skills to the world. 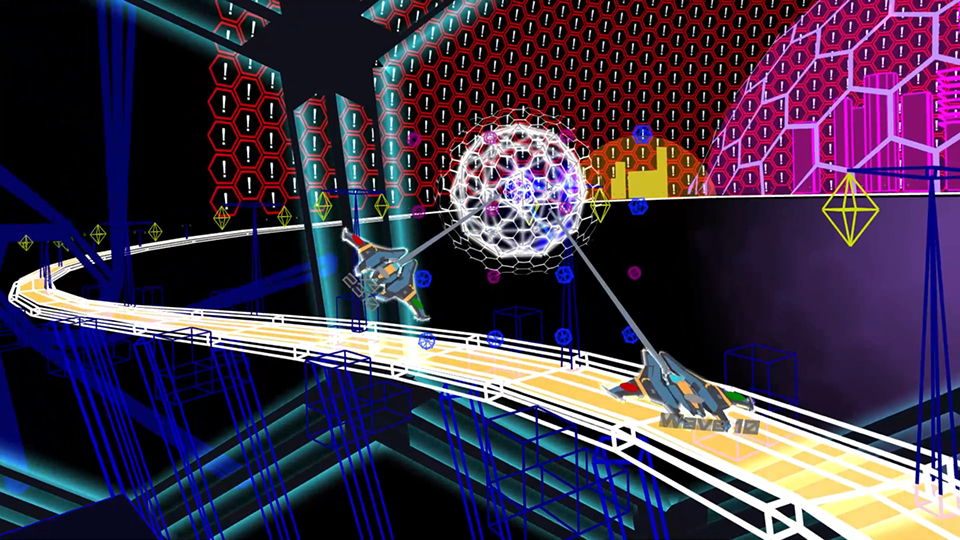 The stylized presentation has your ships fully realized, but everything else, backgrounds and enemies are little more than vector graphics very similar to games like Asteroids or the some of the stuff we have gotten from Llamasoft (Polyibius, Mooselife etc..) with some bright colours and dynamic backgrounds mixing up the games look.  Each of the 5 stages is its own theme and looks completely different from the rest and include a Tech City, Japanese Garden, Galaxy Zone, Holiday Forest and Retro zone with that stylized look allowing the game to run at 120 Hz on the PSVR.  All the stages are stationary with the Orb you need to protect floating before you while regular enemies come from high and low launching their various attacks, typically spawning in the distance and coming toward you with bosses coming in much larger forms.  Some of the environments are a little more dynamic than the others with the opening city stage being quite dull, but they all do the job and when the bullets and enemies start coming in large numbers, you’ll be too focused on survival to worry about what’s going on in the distance.

Each stage has its own unique music playing and, matching the visual style, are some 80’s inspired techno electronic tunes that are pretty damn catchy.  That rhythm aspect needed for max points has your shots making additional noises upon impact with an enemy and I found it near impossible to try and time my shots to the music, especially in the later stages when you’ll be too busy trying to survive to worry about the beat.  Ignoring that rhythm factor, the sound design is on point offering retro ‘pew, pew’ noises and various effects and when combined with the soundtrack delivers a game loaded with retro appeal. 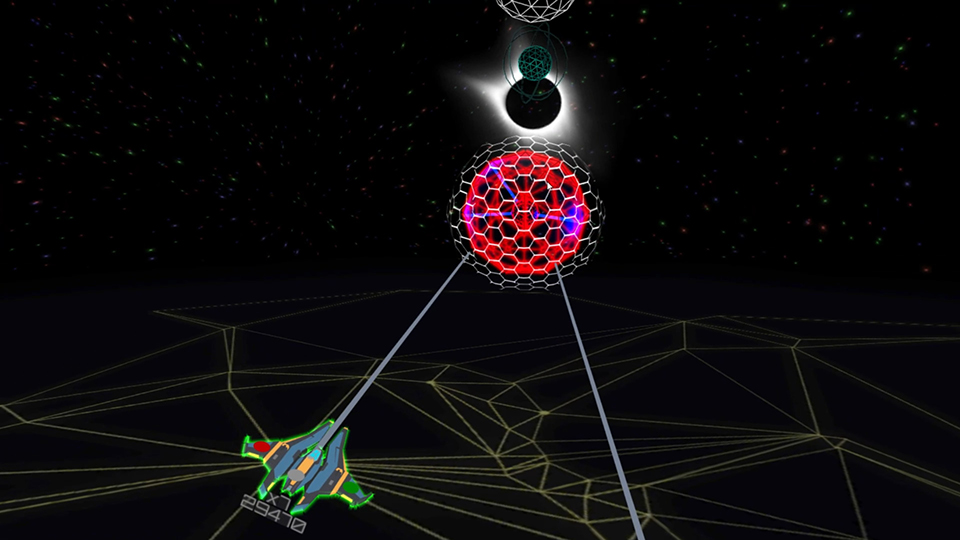 Rhythm ‘n Bullets offers a fair bit of challenge after the first couple of stages with that color changing mechanic always keeping me on my toes.  New enemies show up in each successive stage further adding to the madness though it shouldn’t take any more than 45 minutes to get through the campaign content minus that challenge factor which will hold a few people up.  Where the lasting appeal lies in this is the various ships designs you can use which require you to perform specific tasks like ‘beating the campaign’ or ‘playing endless mode 10 times’ allowing for a little personal flare in your ship choice and of course, playing said endless mode and climbing the ranks.  There is a ‘Relax’ mode in here which let’s you spawn and shoot passive enemies as well as letting you tweak the background visuals, but that kind of stuff really isn’t my jam and felt tacked on more than anything else.  I didn’t run into too many problems other than some slight tracking issue on PSVR when my Moves were to close together, which was easy enough to remedy.  For those that need it, there is a colour-blind mode which changes up the colours of the enemies to make them a little more distinct (something I always appreciate in a game) making for a total package that is small, but feels complete, nonetheless. 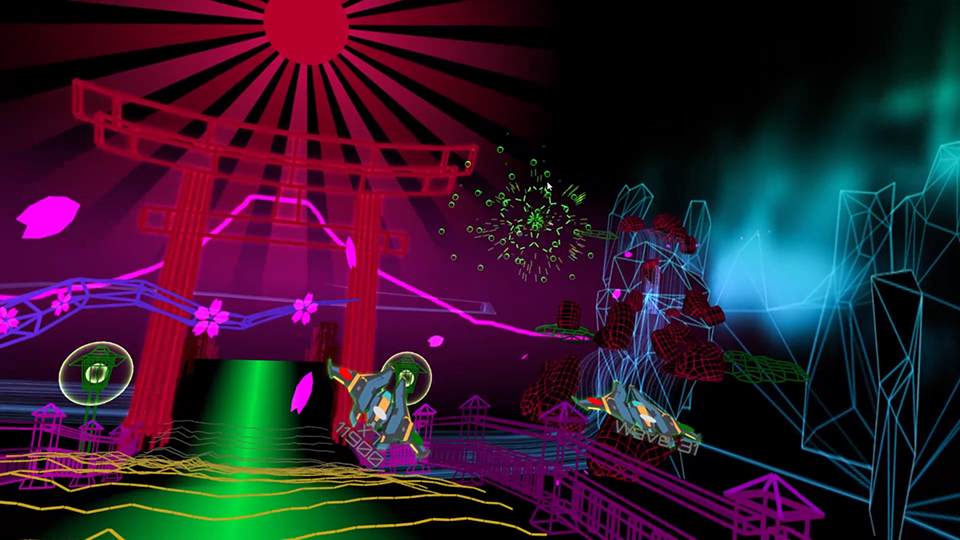 Easily the coolest looking stage in the game

I enjoyed Rhythm and Bullets for what it is, but what it is isn’t exactly going to blow anyone’s mind.  I dug the soundtrack, the variety in the mechanics and the challenge in the last stage and Endless Mode really had me struggling to keep from being overwhelmed.  For those that dug the Star Fox stage in Pixel Ripped 1995, I bet you’ll dig this too as there really aren’t a lot of shoot ‘em ups hlike this for the headset and this one is solid.

What would I pay? This is $10 and if you are into these types of shooters, then I think that’s worth it.  If you are a little more on the fence, maybe wait for a sale as the bulk of the appeal in this one will be on replaying the campaign and trying to climb the leaderboard in endless mode.

DB Creations provided The VR Grid with a press code for this title and, regardless of this review, we thank them for that!