Jeff Minter and all his Llama related madness return in his latest release from his company Llamasoft.  Polybius, named after an arcade game that may have existed in the 80’s, which has become an urban legend, with players reportedly going a bit crazy after viewing the psychedelic action on screen. After a few days of playtesting this title, I can confirm that I have yet to suffer any madness induced side effects although my wife would probably tell you different. 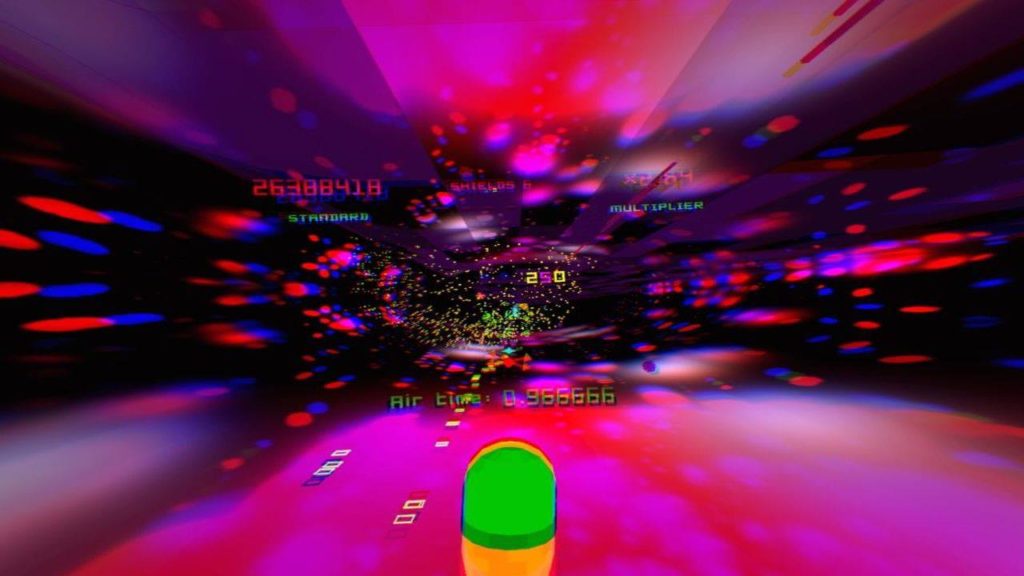 The visuals here or not for the faint of heart or weak minded!

The aforementioned Mr. Minter was most famous in the 1980’s with his trippy and addictive games such as Attack of The Mutant Camels and Tempest 2000. His indie development team produced action shooters providing trance like visuals coupled with ‘just one more go’ gameplay. Polybius is no different and is certainly one of the finest shooters around.

Upon loading, the game gives plenty of warning that anyone who is sensitive to flashing images should not attempt to even play the game.  Polybius can be viewed and played in a variety of different ways, on a 2D TV screen, on a 3D compatible TV and, of course, on the PSVR headset, which offers the best way to play this.  Three gameplay modes are offered from the start.  Classic which you restart from level 1 after each attempt.  Pure, which enables you to progress through the 50 levels by being awarded shields.   Lastly, YOLO, which gives you one shield to progress and get the highest score you can before you die.

Whatever mode you select, the same trippy psychedelic visuals, retro soundtrack and levels infested with cows and goats are all present. Despite the action being very fast paced and frenetic, all played against those colourful and flash visuals, it never gets to the point where I felt nauseated.  Instead I found it very comfortable, feeling myself getting lost within the play world and once I removed the headset I felt energised in a strange kind of way. Players over a certain age will definitely get a feeling of nostalgia as I had no choice but to recollect games of old due to the it’s retro gameplay.

Jeff Minter has always developed his games to be addictive, with the ‘just one more go’ train of thought overriding any of the games shortcomings and bypassing faults of the players.  By the time you put this down, it’ll be way past your bedtime, yet in the morning it’ll be calling you back yet again.  Another goal is offering a zen-like experience where you get into the zone and levels take on an almost instinctive and meditative form. This is fully realised in Polybius as minutes can go by without any player recollection.

The start of the first level has no introductory explanations, just a message which states ‘do what comes natural!’ At its core this is just a shooter with a spaceship that can only manoeuvre left and right and fire, but progressive levels add a great deal of variety to the level setting and objectives from hurtling through the insides of a tube, around a half pipe.  All the action runs at 120 frames per second, offering an incredibly smooth and realistic experience, especially when you’re at full speed with everything becoming incredibly hectic. Your spaceship will get speed boost when you hurtle through gates made out of bulls horns, so the player has a little control over the pace of the action. 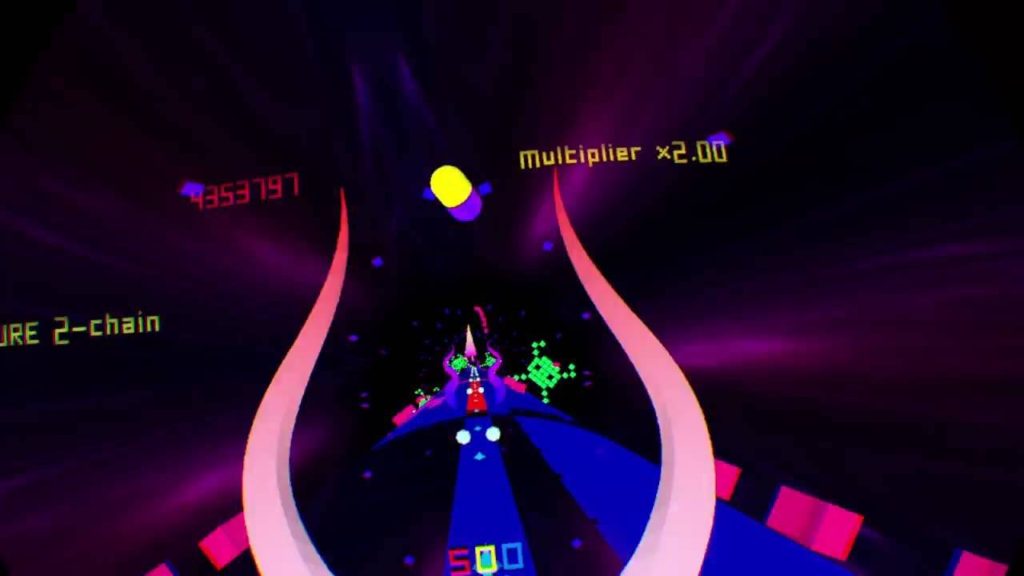 Grab the bull by the horns!

Are there any negatives? Well, if you find yourself getting stuck on one level then progress does become quite difficult.  Forcing either repeated plays or going back to previous levels to hopefully gain more shield and trying again. And of course, any epileptics and players sensitive to flashing lights need not apply.  The music as well sometimes jived with what was going on and other times didn’t fit the action at all or was silent.  It was unsettling, but not enough to ruin any of the fun I had

But otherwise this is a PSVR killer app, a quality title which will do the reputation of VR the world of good.   Polybius is a mix of games like Race The Sun, Stun Runner, Rez and previous Jeff Minter game, Tempest, offering a shooter of the highest calibre. It combines trippy visuals, dazzling speed, addictive and varied gameplay.

What would I Pay? £13.99 provides very good value for money with the amount of fun and addictive gameplay.  This is a must-play for the PSVR.

LLamasoft Ltd provided theVRgrid with a review copy of this title and, regardless of our review, we thank them for that!