Mars 2030  is not a “game,” it’s advertised as a simulator- an educational recreation of the red planet. The project was developed by FMG Labs, alongside several NASA laboratories and MIT researchers, as an actual recreation of what standing on the Martian terrain would be like. Over three years of research, interviews, and satellite imagery were conducted to make this fantastical idea a reality. Mars 2030 plays like a legitimate, somewhat fun game, but was developed with the goal of being as realistic as possible. Humans have, as of this review, never actually stepped on Mars. But, with Mars 2030, you can be among the first people ever to experience the visual feeling of doing so. These epic implications give me goosebumps every time I launch the game. 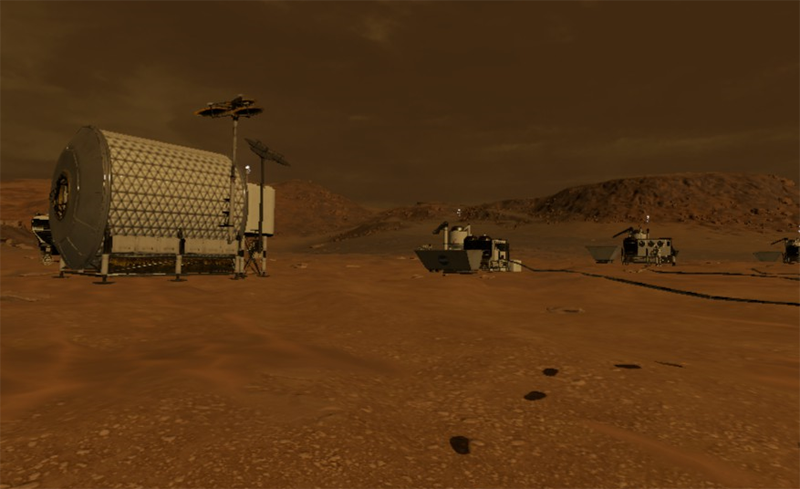 Think about it: The surrounding valley here is a genuine, real environment modeled after Mars. How cool is that?

The absolute best thing about Mars 2030 is its map and environmental design. You might be thinking: “wait! Dan! I saw the footage! It’s just a bunch of bland, boring rocks and mountains! There’s nothing exciting about this!” And you’d be right, except these environments are literally Mars itself. NASA has intricately scanned satellite imagery of the planet’s surface, and this game’s environments are geospatially modeled after its real terrain, based on real images. Every mountain, valley, and plateau is modeled directly after the alien planet. If you had the chance to travel to Mars, to the same locations as in the game, you would see the exact. Same. Environment. This absolutely blows my mind. For the average non-astronaut (let alone a gamer), playing Mars 2030 might just be the most visually realistic Mars-exploration experience you’ll ever have. If you like science as much as I do, you’ll no doubt find lots to love in this game. Adding to the environment are day-night cycles, beautiful nighttime star-scapes, and dynamic weather effects, such as sandstorms of varying intensity.

Something surprising and impressive is the sheer scale of the environment which was included. Roughly 40 square kilometers of space was mapped directly from the planet, and you can explore this just like you would any open world game. This leads to the most pleasantly surprising thing about Mars 2030: it’s generally a decent game.

Any time you see a scientific community publish a game that promises an educational simulation, the popular assumption is that it’ll be a boring and tedious learning experience. This isn’t necessarily the case. Exploring the open world of mars, you can discover new outposts, of which there are many. This almost feels like a watered-down version of No Man’s Sky. Finding new bases is often boring, and typically limited to hearing a fun fact about the geography in the region. Usually, the outposts don’t even have anything interactive or interesting in them. Discovering them is something I found relatively fun, but not particularly enthralling. Still captivating me to explore the planet, I’m always excited to see what sets certain outposts aside from others, and what surrounding Martian environment is facilitating its presence. 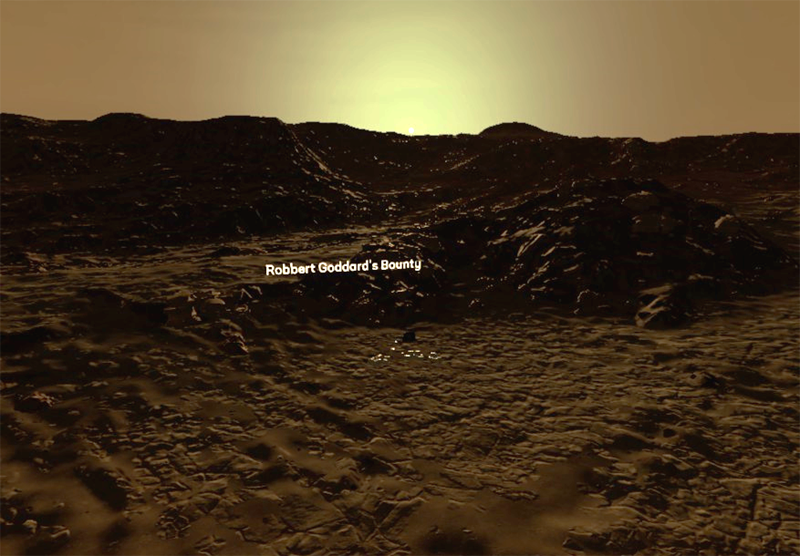 These moments of discovery feel epic, but it’s unfortunate that this is all they consist of

The biggest issue here is that the implications of actually standing in Mars’ environment aren’t translated very well into the game. You can’t die, there are no survival or progression aspects, and you never have to be concerned about anything. You can aimlessly wander the endless Martian deserts, taking nothing with you, and worry about nothing. Even amidst a blistering sandstorm, the worst that could happen is that it becomes harder to see. Likewise, your objective responsibilities as an astronaut, traversing Mars for the first time, feel underwhelming. It feels like your character was only hired by NASA to place flags in the dirt, and go along for the ride. Yes, this is more a “simulator” than a “game,” but there should at least be some stakes forged to help captivate the player, rather than telling them to simply go look at whatever they want.

You can also find rocks that can be analyzed under a microscope, reading incredibly detailed descriptions of their geology. While this is an enjoyable addition to the game, it doesn’t really lead to anything. Although I get enjoyment from reading about these rock structures, this mechanic doesn’t benefit you or progress the game at all. It’s also misleading that the game arbitrarily lets you scan the environment for rocks, which you can pick up and throw around- but these can’t be looked at in the lab. Only a select few, found in noteworthy environments, can even benefit from this mechanic.

There’s also a rover vehicle, which yields decent driving sequences. This realistic rover is excellent in its design, and it has immersive driving mechanics in which you control a joystick held in your left hand. These mechanics would make for a solid driving experience; however, the control instability is unbearably frustrating at times. The slightest change in hand position can cause the rover to spin uncontrollably in the wrong direction when you were just trying to accelerate forward. This would be excellent and highly intuitive driving, if it didn’t feel so broken. 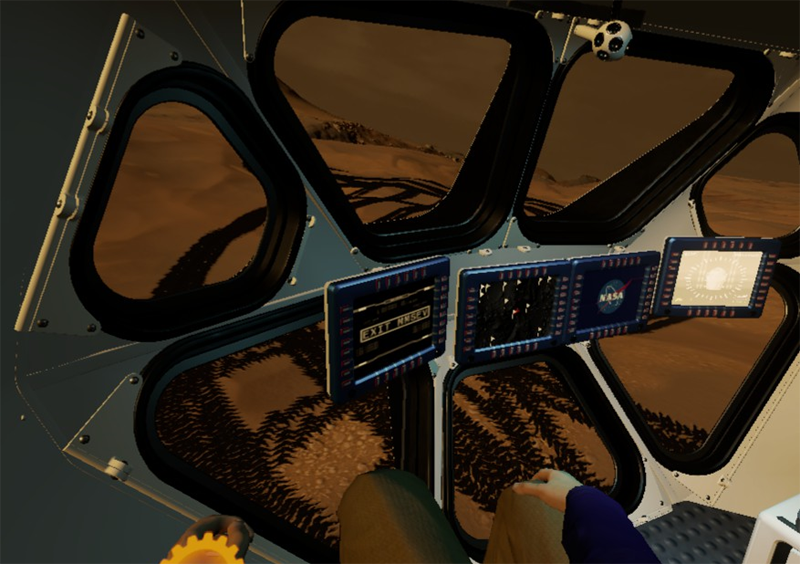 Although I love the vehicle’s design, the tread-marks in front of me should speak for how frustrating its controls are

The rover also includes a map, detailing all the noteworthy locations you can travel to. You can fast-travel to them, or have your vehicle autopilot- the latter of which I really enjoyed, since it allows you to enjoy the driving and scenery while bypassing the rover’s awful controls. While fast-traveling is an important addition that my lack of patience benefits from, it highlights another problem: you can fast-travel to locations you haven’t even discovered yet. If you choose to fast-travel, this removes any shred of challenge or effort required to explore and appreciate the environment. Mars 2030 boasts collection challenges (IE: “1 of 8 special rocks collected!”), but they don’t speak for much when you can fast-travel directly to them, one after another.

Before you assume that the bare-bones gameplay design is a fundamental detriment to the experience, it should be noted this is less a game and more a realistic “simulation,” in which the presence of any genuine “gameplay” content (of which is present) is something to be impressed by. Exploration, outpost colonization, and geology are often fun enough to feel immersive, although they’re set back by the same thing: extreme repetitiveness. For this reason, however, Mars 2030 only maintains its value if you perceive it for what it is. To appreciate it, you must view it not as a “game,” but as an educational, scientific simulator that marginally succeeds in tacking on some degree of legitimate gameplay as a bonus. 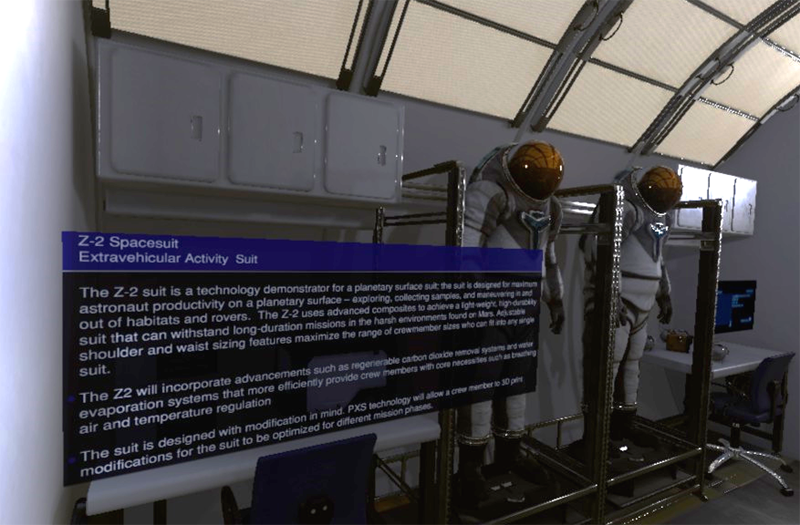 The detailed facts included are genuinely interesting, and I enjoyed stopping to read them all.

Your home base can be entered and explored, adding extra value to the environment. Not only is this base well, but the home base and others include interesting and educational facts pertaining to NASA’s real, technological ambitions for Mars colonization. How will our colony expand and maintain its resources? How effective will communication to Earth be? These questions and many more are answered in Mars 2030.

From a graphical and visual standpoint, the environmental design is exceptionally immersive. It uses the Unreal 4 engine, and while the terrain of Mars itself obviously maintains its dreary, monotonous tones of brownish-red, I’m impressed by how attractive the graphics within the bases are. Lighting and textures are both top-notch, superior to most VR titles I’ve played. And with this, the game runs “decently.” Allegedly, it was unplayable until just days before I got my hands on it, when an update successfully fixed the performance issues. Its frame rate still isn’t perfect, but it’s easily and entirely playable. Loading times are long, though. 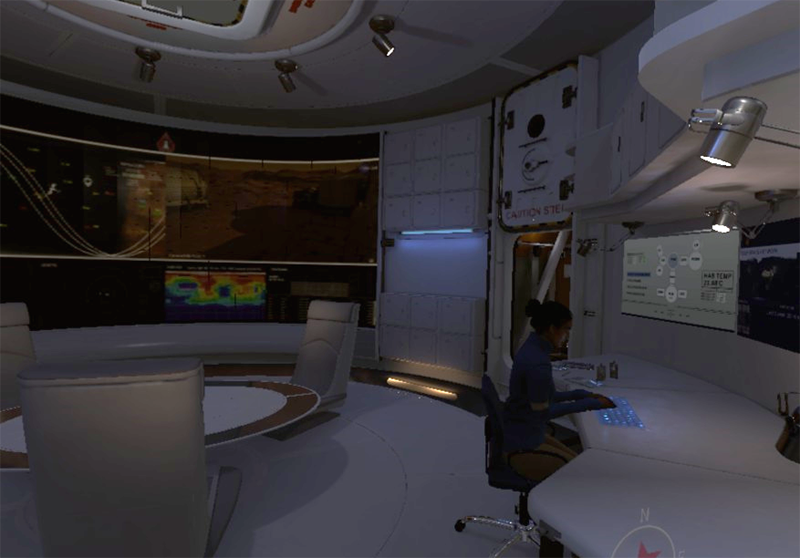 The mission control room, one of many inside your home base, “The Habitat”

One visual issue I noticed was that the space suit is rendered directly around your body: this would be fine, but your suit and helmet are realistically quite large. Turning your body too quickly, your field of vision can be obscured by the helmet, and your body can sometimes lag slightly behind your viewpoint. Your movement options are also iffy: smooth, slow movement is alright, but rendered arbitrary by your teleportation option. Not only is teleportation instant, but it can be cast hundreds of meters away from you. This makes teleportation an even faster, more effective method of travel than driving the vehicle you’re given. It just doesn’t feel balanced.

What would I pay for it?  I’d pay upwards of $20. However, that’s probably just because I’m a huge science nerd that squealed in excitement when I realized the futuristic implications of a Mars VR simulation. You’ll be even more excited when you see that there is legitimate, time-consuming gameplay involved. However, if your motivation is predominantly outlined by thinking that it looks like a fun concept for a video-game, you’d be better off looking elsewhere.

Fusion Media Group Provided theVrgrid.com with a review copy of this game and, regardless of this review, we thank them for that!