*This review has been updated from the original Mar 6, 2019 published review to reflect changes to the game since launch as well as the Jan 21, 2020 PlayStation VR release*

Shadow Legend is an action-RPG that places you in the roll of The Grand Master, The holiest of holy knights in service to Evelyn, the goddess who brought light and life to the World of Anaria.  The opposing god, Aderoth, wishes to bathe the world back into darkness and it’s up to you to venture to his realm and stop him once and for all, vanquishing his forces and along the way performing all manor of classic RPG tropes, but in full VR awesomeness. 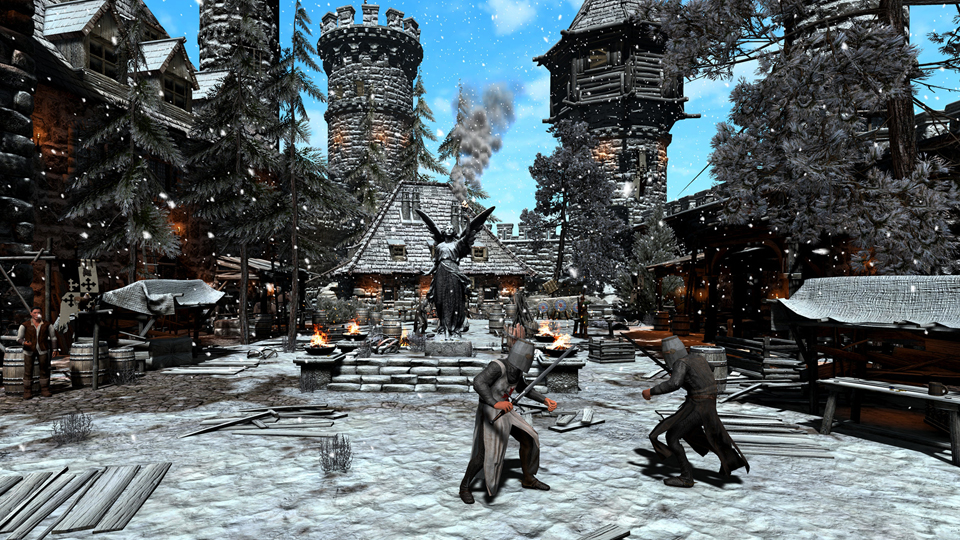 The courtyard is a great place to mess around!

Armed with 2 Motion controllers, you can walk around using the thumbsticks on the PC or face buttons on the PS headset with a few settings available allowing for full locomotion or any other of the typical comfort options.  You can grab a ton of stuff lying around and while some items are just for decoration, others can be interacted with further for some very appreciated immersion.  See a broken sword in a smith shop?  Heat it up, grab a hammer, head to the anvil and straighten that bad boy out.  What about that dog that keeps following you around?  Why not give him a piece of cheese or play fetch with him?  You can do that!  The level of immersion throughout the game is stunning and throughout my play I couldn’t help but marvel at just how much care has went into placing you in this world.  Melee combat puts you in toe-to-toe action with a few different foes and thanks to the physics at play, enemies react to your offensive and defensive tactics.  Blocking their attacks with your own weapons may leave them open for an attack, while trying to sneak in a blocked blow might yield a counter from the enemy and a subsequent hit.  Ranged weapons are also available be it a bow and arrow, magical staves and even a blunderbuss, allowing you to dispatch foes who may be well out of your range.  Platforming elements pop up in a few stages and even though you can’t jump, these moments still felt quite natural and were never overly challenging as long as you were careful with your timing.  Each stage is its own confined space and contains combat and puzzle elements that should take you somewhere in the 5 to 6-hour range to conquer depending upon how long decide to spend in each stage.

Shadow Legend most definitely borrows from traditional and stock fantasy elements making everything in here feel very familiar.  The stages are all gothic and medieval themed and carry a large amount of detail no matter which headset you play this on.  The game looks very crisp and clean on PS or PC headsets with an attention to detail we don’t get enough of in VR..  What is impressive is just how authentic each of these areas feel.  Every stage in this game can be explored, which I encourage, with treasure and runes hidden throughout the game.  You’ll visit a courtyard, crypt, cemetery and few other locales that all bear a very different look from the others, keeping things feeling very fresh with 2 new stages added since the games original launch.  You will encounter ghouls, skeletons, demonic imps and 1 or 2 others as well 2 large boss battles with some of the enemies looking way better then others, though minus the imps, they all do their job.  Some of the set pieces are quite massive and no matter what stage you are in, you’ll be lost in the world presented. 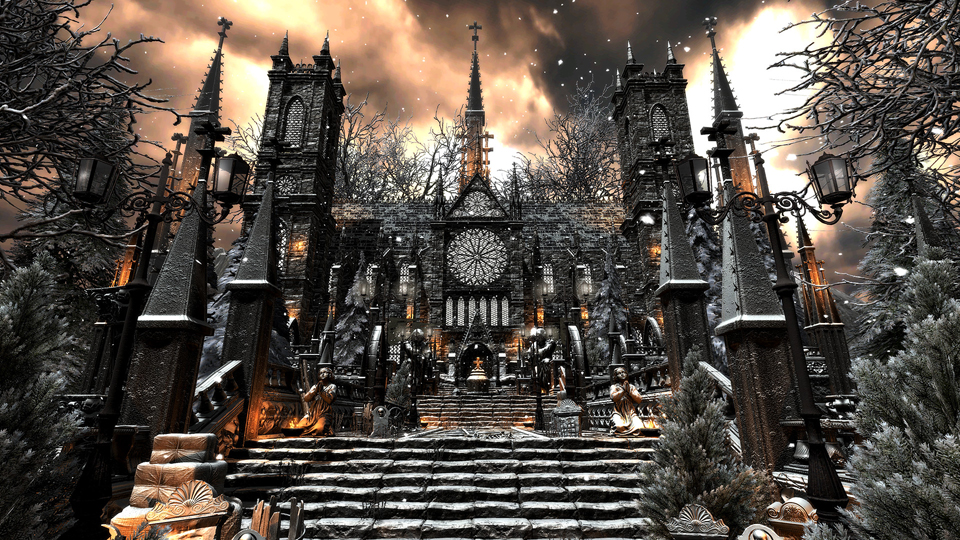 A lot of care went into the level design,

All the characters are voice acted and thanks to Windows voice recognition software, you can actually speak the lines given to you when you interact with the NPC’s or, should you choose, you can just grab the words you want to progress the conversation.  It’s very rewarding to say the words aloud and have the person talking to you respond in-kind.  The voice option has been removed from the PSVR version of the game but that is a minor omission as I feel players would opt for the silent approach anyways.  Otherwise the music the accompanies you on your journey is fantastical and Gothic, fitting the action nicely with a unique track for every stage.

You can climb ladders and ropes in search of loot and even purchase goods from a godly trader.  Two stages heavily involve platforming or using pickaxes to climb out of a pit.  Each of the stages has a select number of runes to find and I recommend seeking them all out.  Not only are they needed to wield some of the weapons you can buy in the game but acquiring them will extend the game time and they are just fun to hunt down.  Some are hidden around the stage; others may require you to perform certain actions for them to pop out or solve riddles to reveal them.  Every stage has its own unique obstacles with many requiring keys to open doors or chests.  Perhaps I wasn’t paying attention during my playtime, but I had often accrued quest related items without realizing so if you ever get stumped, check your inventory, you may already have what you are looking for. At any time, you can open up your menu, a large book, which lists your main quest objectives as well as the optional ones, current rune count and how many runes you have found in each stage.  Once you find all the runes, a powerful voice states so and tells you to move on.  There is also an upgrade system where you can spend the souls of your foes on better health or more melee or projectile damage so it’s in your best interest to not let a single monster live. 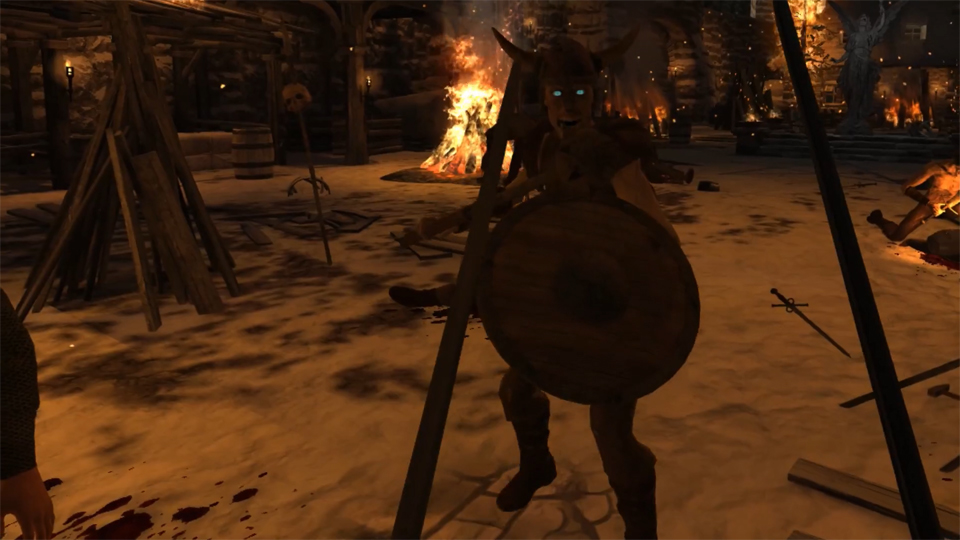 I called this guy ‘ugly’ and he came right at me!

Shadow Legend has seen improvements since it’s original launch in 2019 including 2 more stages as well as a revamped final boss bottle which just fits the vibe of the game and properly uses mechanics learned throughout the campaign.  The combat lies somewhere between Golem and Killing Floor with a parry system in place that works well but hit detection can be spotty forcing said waggle in the hopes of getting a hit in before the enemy recovers.  Overall the combat is still quite satisfying but for those looking for Blade and Sorcery levels of combat, this doesn’t quite reach those heights.  Every new game mechanic is a treat and might pop up once more during the campaign, which is commendable, but I would have loved to spend more time in here battling the demonic hellspawn and just messing around, even if those same mechanics showed up a few more times.  Whether it’s just exploring the stages in search of secrets, mixing a potion, cooking a steak, firing a ballista or whatever, I want more!  There is a barter system in place to get the best price on your trades, but it seems a little pointless given just how much loot is lying around (it’s a lot!!!) and how infrequently the vendor shows up. You have a quest guide which basically highlights all the unique interactions in the game but I urge you to mess around before you rely on that list as it’s a joy whenever you discover a new interaction on your own.  After you complete the game, you can revisit any stage to pick up any left behind items which was an option not available at launch, but I really urge anyone playing to take their time and 100% every stage on their 1st go as almost every discovery rewards you in one way or another. 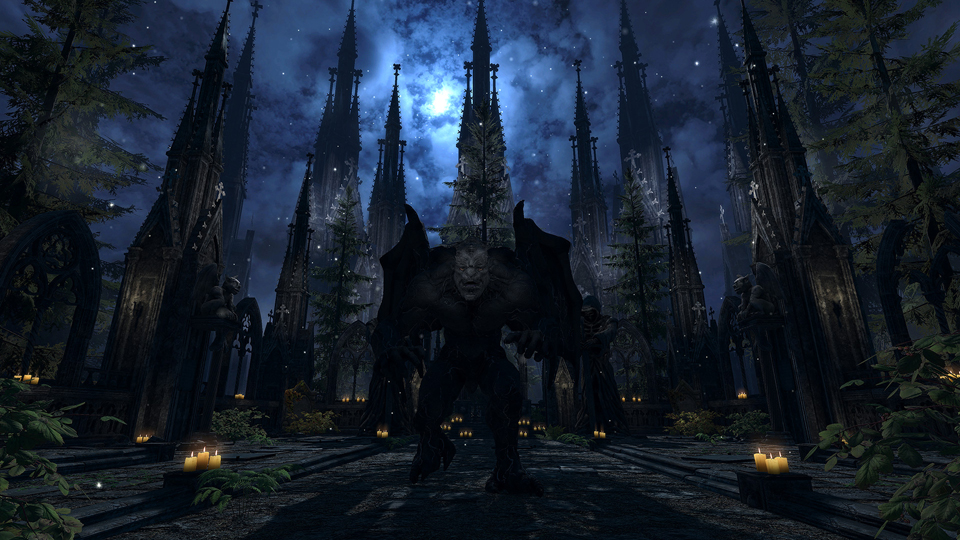 Shadow Legend is by no means perfect, and while the overall game is still relatively small and contained, it still impressed the heck out of me.  It’s not open world like Skyrim, nor is it trying to be.  What it is, is a decent length single-player campaign in a fully realized fantasy world that gave me so many ‘oh, wow!’ moments, I lost count.  Shadow Legend raises the bar with what we should expecting out of interactivity in VR games and while the game’s conclusion is still a little abrupt, the overall package still delivers in spades…just make sure you take your time and explore each level!

What would I pay? For what Shadow Legend brings to the table I’m more then okay with the $25 asking price.  It’s not going swallow up your gaming life but offers up a level of immersion that many VR games lack.  The added mini quests and freedom to mess around will extend game time a bit but when it’s all said and done this is a quick romp in VR that aims for quality over quantity and delivers a very fun game!

Vitruvius VR provided The VR Grid with  press codes for this review and, regardless of this review, we thank them for that!