It’s time to VACAAATION!!!…. or at least simulate a vacation in this follow up ( I can’t call it a sequel) to one of VR’s most popular title in Job Simulator.  Like Job Simulator, this is not a true simulation but rather a mockery of what we know and love today thanks to what I assume are our ignorant robot overlords who have taken over the planet.  Apparently, these robots are doing their best to accommodate you in the form of simulations from human history but lack the necessary knowledge to truly recreate these experiences, leaving us with a comedic task simulator loaded with dry humor in regard to how we live in the modern age. 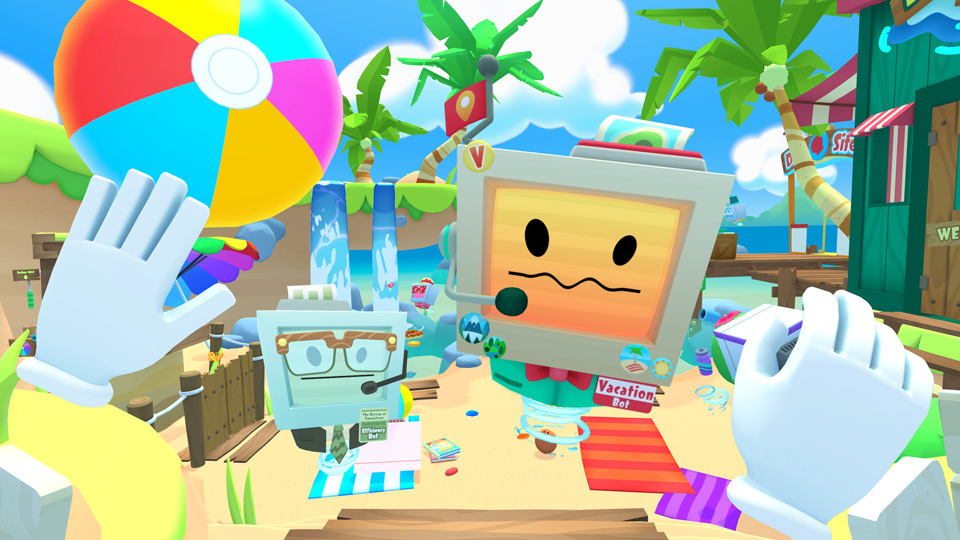 It’s time live it up on the beach!

Utilizing your play area, you are going to need 2 tracked motion controllers as you mess around with whatever you are supposed to do in front of you.   There is no turn option presently available as instead you must use the room scale tracking offered and even with my 2-camera rift setup, I encountered almost zero issues. Like Job Simulator, Vacation Simulator offers up a few unique areas to visit with the 5th one being unlocked after you have created enough memories.  Instead of staying completely stationary, you can now teleport around larger areas to different stations which ask you to perform simple tasks.   These range from building sand castles, taking pictures, throwing snowballs, catching fish and a literal ton more.  Many of these tasks also have multiple levels to get through, getting steadily harder in the process.  Each time you complete a task you create a memory, which is added to your total memory count.  What is nice is that some of these tasks require to visit the other areas to find items needed to create that memory.  Besides just running through tasks there is also a small story going which is largely just narration from your 2 host bots, but it serves it’s purpose in motivating you to experience all the game has to offer.  You have a backpack which can store a few items and home base (think hotel room) with a bed, closet (to store your stuff) and few other little bonuses like a game console.   The idea here is to explore and complete vacation-centric jobs with each area having a special area you can visit once you have accrued 5 stage specific memories.

As this is still in the Job Simulator universe, this game feels like an expansion upon the original.   The stages are much larger now as is the general scope of the game. Each area feels wholly unique and carries the exact same cartoonish charm, only in more relaxing settings.   Each vacation spot is populated by a bunch of bots, as well some simulated wild life and a host of objects too mess around with.  The game is bright, colorful and so damned friendly I think it’s near impossible for anyone to dislike the game.  It’s not the most impressive looking game you have every played, but the level of polish is undeniable and showcases just how much care has went into this. 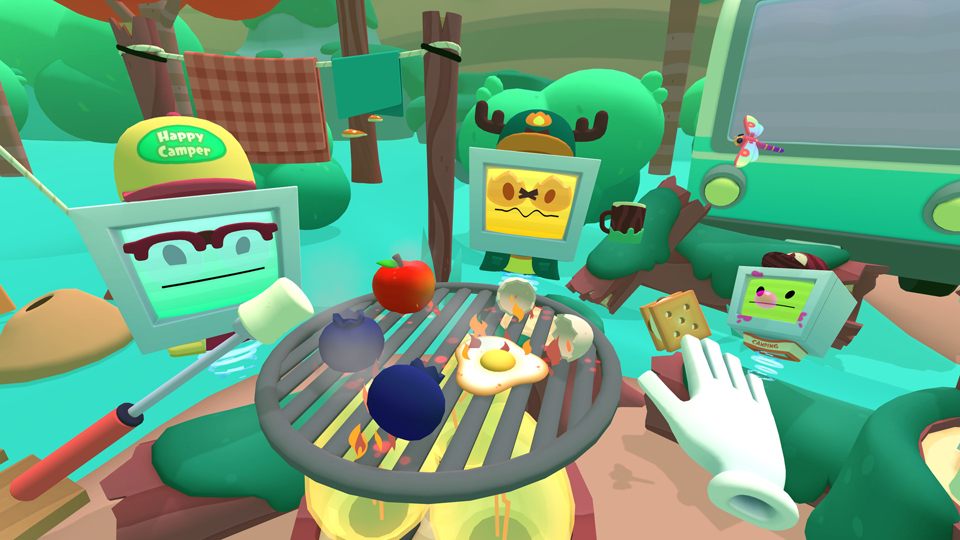 Camping has never been so…chaotic!

Beyond the visuals, the real entertainment lies in the comedy, which comes from the robot’s complete lack of understanding how humans work.  They constantly mess up or misuse classic sayings or insert robotic words when they don’t fully understand what it is they are talking about.  The humor is a little dry and very satirical, but I can’t count how many times I chuckled at myself after hearing the next joke…and there are so many jokes.  Seeing just how these robots screw up simple situations is hilarious at times and only adds to that level of polish I mentioned earlier.  Sound effects, music and everything else is spot on in whatever task you are working on and makes for a near flawless VR experience.

It’s now on you to visit robots but you also have the freedom to do so in whatever order you want in whichever area you choose.  Sick of chipping away at ice blocks, screw it and head over to the beach and cook up some grub for the locals, tired of that, go visit the yoga instructor for a little calming exercise.  Done with that?  Go paint a picture in the forest area and then grab a sling shot and hunt down targets hidden throughout the game.  The point I’m making here is that there is a ton of stuff to get through with minimal memories needed to unlock all the games content, but plenty of challenge in trying to complete the harder mini-games.  It’s the perfect blend of casual VR introduction and serious challenge catering to just about anyone who ventures into the game.   Some games do repeat themselves in each area which was a little disappointing, but the shear variety makes up for that and they do usually differ slightly.   If you want to share your experiences with others, an in-game camera can be used to not only save pictures, but you can save those pictures directly to your hard drive for easy sharing.  There is actually a few different camera options available letting you display drone cams that can be controlled by a second user or just placing a spectator camera for some 3rd person viewing of the action.   I did run into 1 or 2 small issues with one of the video games not working properly and a color matching task that I couldn’t complete as I have some mild color-blindness, but seeing as how there is just so much to do, I can easily forgive these minor issues, especially since I’m sure the devs will fix the former and I’ll just have my wife do the latter one for me. 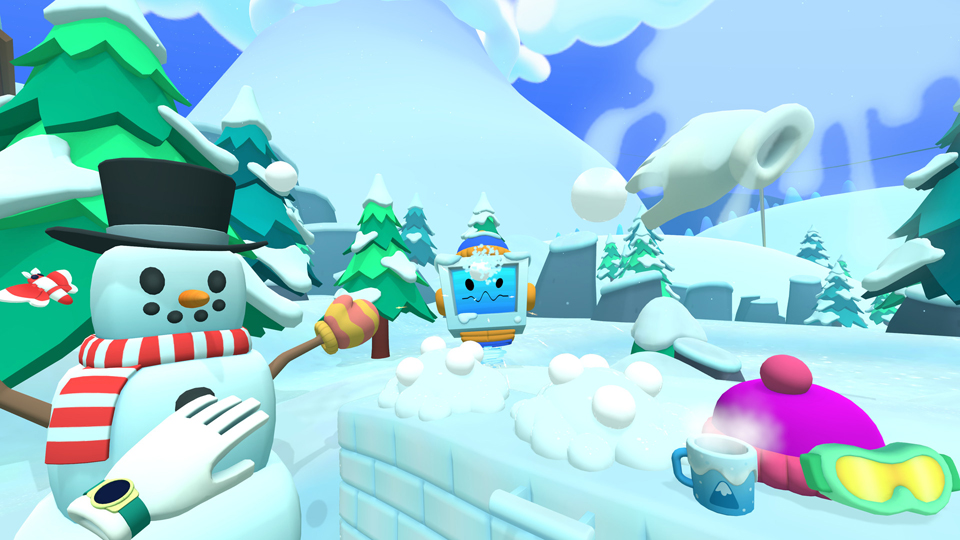 I liked Job Simulator for what it was, but for myself, playing it a few years after launch didn’t do it any favors and I found it to be limiting.  This follow-up addresses many of the issues I had with first game and delivers a wonderful mix of mini-games, satire and just straight up comedy.  I loved the more open areas and the freedom to explore really makes Vacation Simulator an easy game to jump into, play for however long you want and duck out.  The more challenging tasks are actually really difficult, though like I said, if you don’t want to do them, you don’t have to.  Add in the host of things you can just do, just to see what might happen, and you get another VR gem that will more then likely top the sales charts for years to come, and for good reason.

What would I pay? The $30 asking price for this is an easy ask.  This is much lengthier then the first game and offers so many mini-games more then a few will appeal to you.  Add in the dry comedy and near-flawless presentation and we have an absolute winner that improves upon its predecessor in every way!

Owlchemy Labs provided The VR Grid with a press code for this title and, regardless of this review, we thank them for that!