I feel like Theme Park games seem to be stuck in a bit of a rut at this moment in time.  In earlier days, we had the success of Bullfrogs’ Theme Park and Rollercoaster Tycoon and have seen many variants since. It’s all gone a bit stale in the theme park management genre as they all really look and play all the same. Here though is the opportunity to at least present something new and original. It’s not uncommon to experience 360 videos trying to make you feel like you are riding an actual rollercoaster, but here we have a title which lets you ride the attractions you build in your very own park. 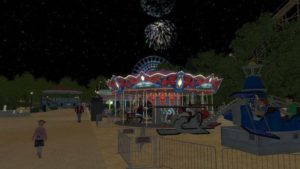 Don’t eat before going on any of the rides!

First, I must establish that while this is a game which is VR compatible, the vast majority of the game is played in regular 2D. This entails taking ownership of a portion of land, building rides, attractions and stalls, setting ticket prices, building paths and ensuring your park looks as exciting and pretty as possible, thus attracting more paying customers and taking in the cash for even more bigger rides and death defying rollercoasters.

The VR sections of the game involve donning the PSVR headset and finding yourself at the entrance to your park where you are then free to than walk around and take in all that you have produced. The viewpoint is first person and has forward and backward smooth motion but turning is in block quarters. The visuals for the building side are ok but nothing remarkable, the VR sections however, are very poor.  Think PS2 graphics. They are blocky and simple; character models are ugly and crude and you often find 3 or 4 of the same 3D models walking around in the same small area.

As mentioned above, most rides you build can be experienced in VR and as such you firstly must buy tickets from the booth. Upon first walking up to a ride you are greeted with a message that the ride in question is restricted within VR mode and that you have to go within the options menu to overide this. The game also gives the warning that going on the rides is most likely to make you feel very sick. For someone who does suffer the occasional bout of motion sickness, I wondered how long I would be able to take with swinging backwards and forwards on a pirate ship. The answer is roughly around 6 seconds. The same applied to many of the other rides which all seem to have the same swinging or spinning motion. I let a few friends experience this and they didn’t really fare any better, which for me made this large section of the VR redundant. The Go Karts played better as you use the DS controller to steer, but with no opponents and a boring track, I can’t see any appeal to ride them more than once. Other than these attractions there are various stalls you can play; ‘throwing darts’ and ‘balls in buckets’ and so on.  You can win a prize but that’s about the only incentive to do that.

As well as walking around your own park, you get the chance to walk around parks that other people have designed which is a nifty idea, but again the slow-moving nature of the free walking sections coupled with the vomit inducing rides kind of sets the appeal wayward. 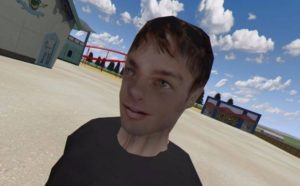 The 2D sections do possess some entertainment as you want to make progress in researching bigger and better rides and it’s always fun, and a personal achievement, to create a spectacular rollercoaster to please the paying crowds. It’s obvious that the developers do not have a perfect grasp of the English language as on many occasions there are very strange sentences and punctuation which made me chuckle. The presentation though throughout both sections are shoddy and flawed but give it some effort and the many shortcomings can be pushed aside and a good few hours of play can be enjoyed, if you are willing to stick at it.   All the fun of the fair? Not exactly!

What would I pay? The VR parts I would only play on the first sitting, to experience the walk about and rides and then settle on playing just the main management side of things. As such I feel that £16.99 is a bit too much to pay for such, more likely £9.99.