I am going to start this one off by stating that I’ve never been a fan of Simulation Driving games.  I’ve played many in my day, GT, Need for Speed, Forza ect.  The genre has just never been my cup of tea.  That may have changed with VR.  Driveclub VR is available for PSVR for $40 and it’s exactly what you would expect it to be from a Racing game…and its pretty darn fun!

This is the most fun I have had playing a simulation racing game.  Using only the PS controller (or a compatible wheel setup, if you have one)  to drive your vehicle of choice, the game immediately puts you in your 1st race so you get to figure out the controls on the fly…I came in last place.  After the initial race you are presented with a menu showcasing all the options available to you.  The 1st thing you need to do is start or join a drive club.  Once you’ve done that you can race to your hearts content.  I’m not sure what this game expected of me, but once I “mastered” the controls I was ramming my way to victory.  Every corner was a bumper car event waiting to happen until I pulled into the lead than, as long as I didn’t mess up, it was an easy 1st place finish. 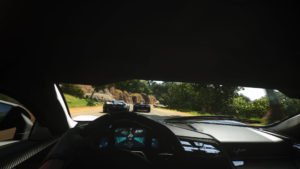 Being behind the wheel in VR is awesome, but don’t these screenshots fool you, this game loses resolution inside a headset

Each stage has a bunch of challenges where upon completion unlock more cars, logos, modes and everything else to add to your driving experience.   I didn’t really notice any real difference in the vehicles except a few felt faster than the others, but AI seemed to keep pace regardless.  That’s the bulk of your experience and after a fair bit of racing, it does kind of get old.  The single player gameplay is solid and whenever I lost it felt like my screw ups were the reason for that, not the games.  Throughout each race you will be given goals to beat that were set by other players (or yourself!).  These were nice little additions to the single player racing the spurred me to get better.

I had a lot of fun with the multiplayer.  Races felt more organic as I faced up against human opposition.  There is something to be said about racing against opponents that are just as likely to mess up that next turn as much as you are.  Also, everyone I played with online was friendly and respectful.  I swear I was in an online twilight zone because I can’t think of the last time I’ve enjoyed my online companions.  I fear that this will be short lived as the install base for PSVR grows, but for now the online community in general is full of people who just like VR, it’s great.  Rewards are the same as in the single player mode and add to your score and unlock more everything. 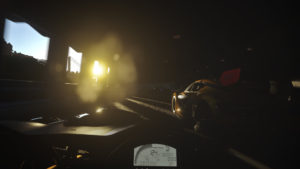 The lighting effects are a joy to behold in this game, trust me!

The biggest, most noticeable issue with this game is the draw distance, not the fact that it’s short but that anything outside of your vehicle quickly becomes a pixelated mess.  Environments are heavily detailed, at first glance, but stare at them for more than a few seconds and the visual flaws begin to show themselves.  Everything here just doesn’t look that good, especially the further away from you it is.  Out of all the PSVR games I’ve played, I’ve never seen this problem to this degree.  It is very detracting, especially when juxtaposed against your vehicles and their interiors, which are heavily detailed and awesome. On the flip side of that though are the lighting effects.  When you see the light from a fading sun blindingly glare off your dusty windshield, immersion is at its peak.   The audio is good, but subdued; cars rev and sound awesome, wheels squeal at every tight corner and the music and presentation are all top notch, it just seems a little quiet, even when cranking the volume

Despite the detracting visuals, I still had a blast playing this game.  With plenty of different locals to race though and tons of customization options for all your vehicles (apparently 90 or so to unlock in total) there is a fair bit of content here.  That said, as a casual gamer who may not be a gaming gearhead (great term!) you may lose interest in exploring all the facets of this game.  Racing is great fun, both in single and multiplayer, but does begin to lose its traction the more you play.  This may be the kind of experience that is best enjoyed in small doses.

What would I pay? $40.This most fun I have had in a sim driving game.  Distant visuals aside this game nails driving physics and VR makes this a must purchase.