VR has redefined some aspects of multiplayer gaming for myself with games like Werewolves Within, Star Trek Bridge Crew & even Rec Room showcasing just how much more you can do with friends in VR beside just shooting fools…which I still enjoy immensely.  Those games I mentioned can allow you and a crew of friends to work together, or against each other, to claim victory and now we have Bullet Roulette, where 4 opponents sit around the table and play one of the world’s most dangerous games as you try and outwit and outplay everyone else and be the last one standing…or in this case sitting. 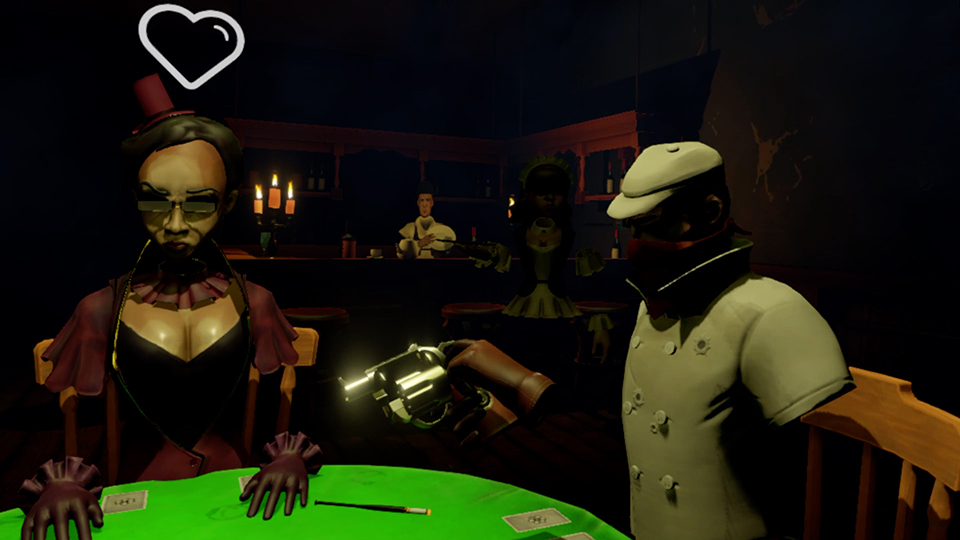 Every shot is a gamble.

Controls are simple as you have 2 motion controllers and thus 2 hands and sit at a round table facing off against 3 other players, either human or AI.  Someone will be randomly picked to load the 6-shooter pistol with a single bullet, spin the drum and fire at themselves.  Should the gun be loaded than that player is killed, and the game continues.  If the gun does not fire than it gets past along in a counter clockwise manor until only 1 player remains.   Thankfully, the developers saw fit to spice things up a bit by giving each player 3 random game cards which can drastically affect the game.  You can get immunity from a shot, change the direction of play, see where the bullet is in the drum, force players to shoot at another person at the table and a bunch more.  Oh, did I forget to mention that you can use your 1 shot to POSSIBLY take out your foes?  That is if you have the coins to do so.  Every round you survive earns you 1 coin and should you kill someone else, you get their loot further adding to the dynamic at the table and turning this into a sort of twisted strategy and not just a game of luck and chance.  There is only one game mode with options for private or public play with bots filling in any spots not occupied by real people. 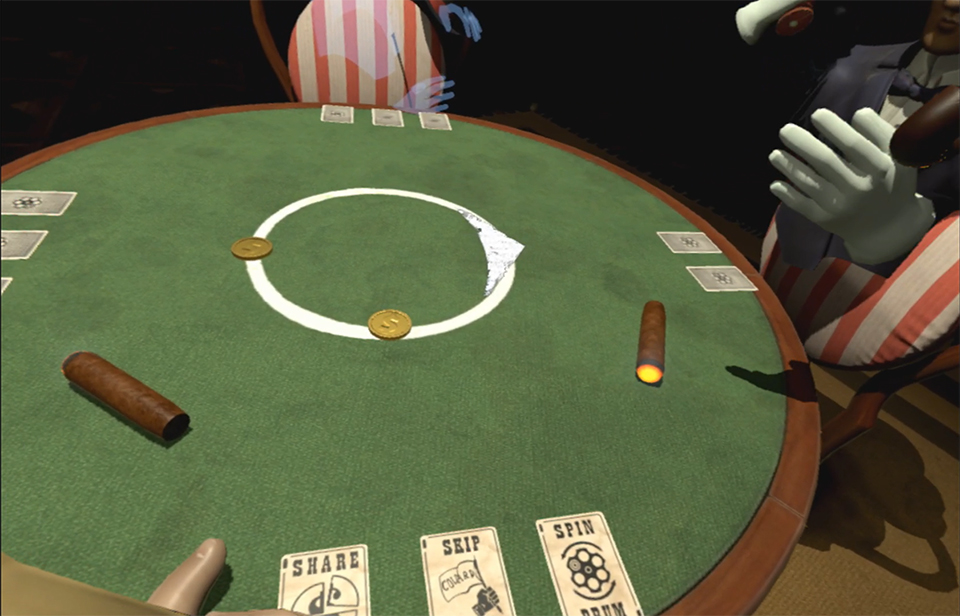 The cards can save you…as long as you play them at the right time.

Opting for a Western look and feel, the game takes place in a dimly lit saloon or dining hall with only your table, a bartender, waitress and piano player to keep you company.  The avatars and your surroundings are cartoonish with all the characters you face being stereotypes from that era.  A bandit, an Indian Chief, gentleman & gentle ladies make up the bulk of the 6 characters you’ll face with your own being randomly selected by the game.  Each avatar is a floating body and head with hands that animate well enough when controlled by the AI, offering some facial expressions of surprise and relief when something happens around the table with the same happening when players control each gambler, though obviously with people behind the wheel, everyone is just way more animated.  Whether you play on the PSVR or PC, the game looks identical save for the resolution bump on the PC side of things.  Lighting effects are decent shrouding everything in a dark shadowy haze that amplifies the importance of the action happening at the table.  The bartender cleans glasses behind the counter, the waitress impatiently walks back and forth, and the piano player plays a timely tune though should you be sick of any of their shenanigans, the next time you get the gun, you can always try and hit the off trigger for the NPC’s (hint, hint). 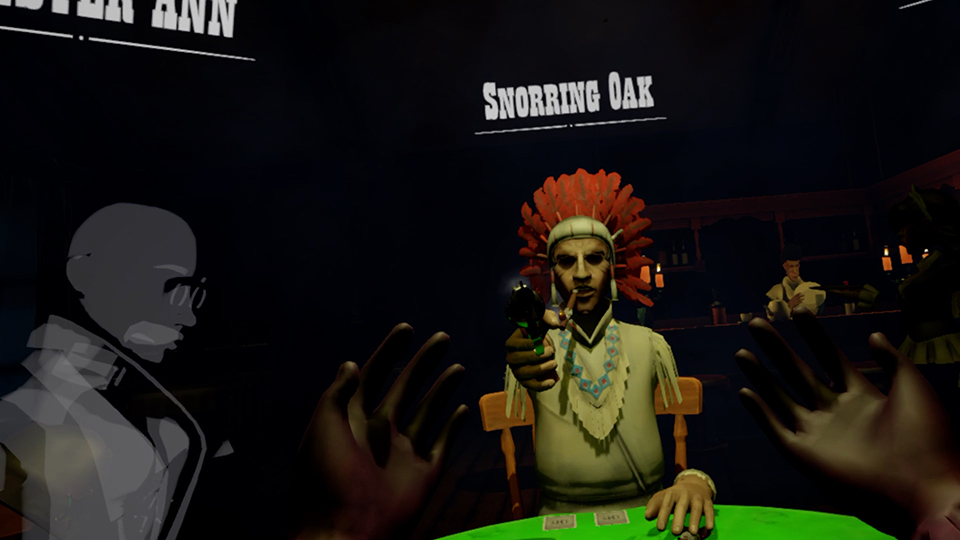 It’s never good to be in this position!

Audio wise there isn’t a ton to talk about with ambient sound effects adding to the overall immersion of the environment, though are often drowned out by the piano player nearby who plays a singular track, which does wear thin fast.  This is really noticeable when someone takes out the pianist leaving the game in near silence.  With 4 human players, you will not notice this as you’ll all be talking over each other anyways but when playing against the AI, the game is uncomfortably quiet as the AI players don’t speak.  That said everything sounds as it should and given just how small scale this game is, I’m fine with the audio side of things.

In truth, there is a fair bit to like here but it has issues.  While the PC side supports in-game chat, the PSVR version doesn’t, forcing you to party up to hear each other.  Playing with the AI players just isn’t as fun and while the AI is fairly smart, they will occasionally make very silly mistakes that highlight that you aren’t playing with real people.  Finding games can also be a challenge as servers are broken up by region so you’ll have to search over and over again if you’re looking to play with randoms, and that’s assuming there are people online to play with. On both the PC & PS I encountered a variety of small glitches with bullets floating in the air, guns not loading, people coming back from the dead and so on and while some of these did ruin that game, with matches only taking a few minutes, it’s also easy forgive them as they often result in some hilariously fun moments.  One last thing would be those coins I mentioned, which don’t seem to matter as much as they should as shooting at someone else will remove anywhere from 1 to 3 coins from your purse depending upon how many you have.  The issues I did experience did happen infrequently enough that they never really took to much away from the game, but they are there, and I’d be remiss if I didn’t mention them. 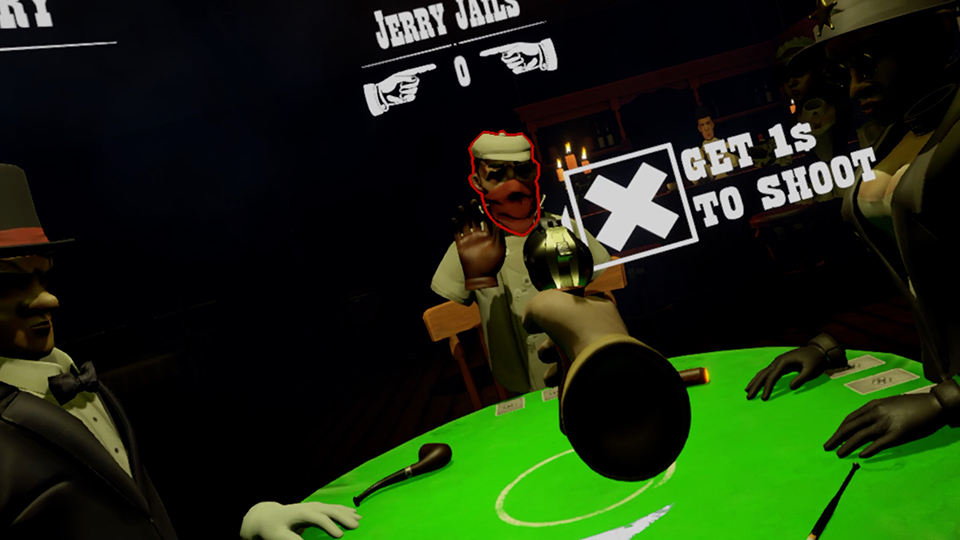 It’s always good to be on this side of the gun!

Bullet Roulette is a fun and cheap way to hang out with a few friends in VR with the added bonus of competition as you try and take out your opponents before you bite the bullet. The longer I played, the more I realized just how important those cards are in affecting gameplay and they added a nice dynamic to what would otherwise be a fairly boring game. The single player experience isn’t nearly as engaging, but it’s still fun and for a smaller social VR title, I dig what’s in here.

What would I pay?  The price varies from Steam and PS4 with the average cost coming in somewhere in the $8 range, which I think is perfectly fine for this.  The value lies in the online play so if you can’t find any matches online, convince a few of your VR friends to pick this up and I guarantee you’ll have a great time trying not to kill yourself!

FIBRUM Limited provided The VR Grid with a press code for this title and, regardless of this review, we thank them for that!