69 Ways to Kill a Zombie is a simplistic VR zombie shooter that attempts to copy “Call of Duty’s” Nazi zombies, but succeeds in delivering little more than a buggy, uninspired mess. Providing just minutes of borderline-unplayable gameplay, I’m shocked that this got through Steam’s quality control.

Clearly influenced by CoD’s Nazi zombies, 69 Ways to Kill a Zombie pits you against endless waves of zombies, spawned via a boarded-up window, in one of various maps. You’ve got countless weapons to choose from, either scattered around the environment or from a randomized weapon crate. Or, at least, that’s the experience the game attempts to provide. 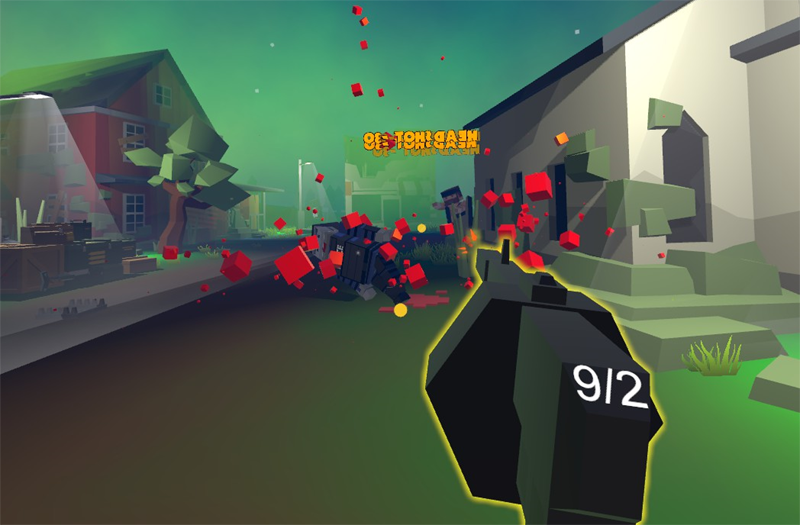 Why is the “HEADSHOT” message spelled backwards?

The amount of game-breaking bugs in this title is staggering. I couldn’t even launch the game via Steam due to a “missing executable” error, and many others in Steam’s forums say they can’t play at all due to this. I found a way around by going into the game’s folder and clicking a “steam pub build” exe, but having to use this kind of workaround- every time you launch the game- is unacceptable for a $20 title. Even once I was playing, the bugs kept getting worse.

Upon beating a wave of zombies, the screen goes red and you’re told that “zombies ate your brains!” I assumed I kept dying for no reason, and didn’t realize this wasn’t the case until I waited ten seconds (after beating a round) and saw the game-over screen disappear. Additionally, only two of the game’s six maps are even playable. In one map, zombies spawn under the floor and kill you without even seeing them. In another, the ceiling is way too low and prevents you from holding any weapons. One map’s “play” button doesn’t start the game when you click it, and in another map, such a button doesn’t even exist. The church and hospital maps are playable, but tiny and filled with annoying invisible walls.

The broken collision physics in 69 Ways to Kill a Zombie are a sight to behold. All your weapons are dramatically oversized, often being larger than your whole body. Although the imagery of waving around an 8-foot traffic sign sounds cool, this contradicts with the game’s physics. Items snag on walls, the floor, the ceiling, and more. This jerks around larger weapons (which are a majority of them) to the point where they’re unusable. These wonky collision physics are accompanied by extremely loud sound effects, overused when waving around your weapons or smacking them into things. Weapons such as chain-wrapped baseball bats, or lightsabers, are so headache-inducingly loud that they aren’t even worth using.

While we’re on the subject of weapons, they aren’t very well-designed or effective either. Befitting the game’s art-style, weapons all feel like cheap, plastic junk. Moreover, they’re either overpowered or useless. Split between those two categories, most weapons feel the same. I’m skeptical, but accepting, of the notion that this game literally gives you 69 ways to kill a zombie. However, melee weapons (which comprise the vast majority of them) are all re-skins of one another. Additionally, the only thing that differentiates guns are their fire rates. Despite having a wide arsenal, the only quality you’ll look for in a weapon is if it’s small enough to avoid glitching the game out. 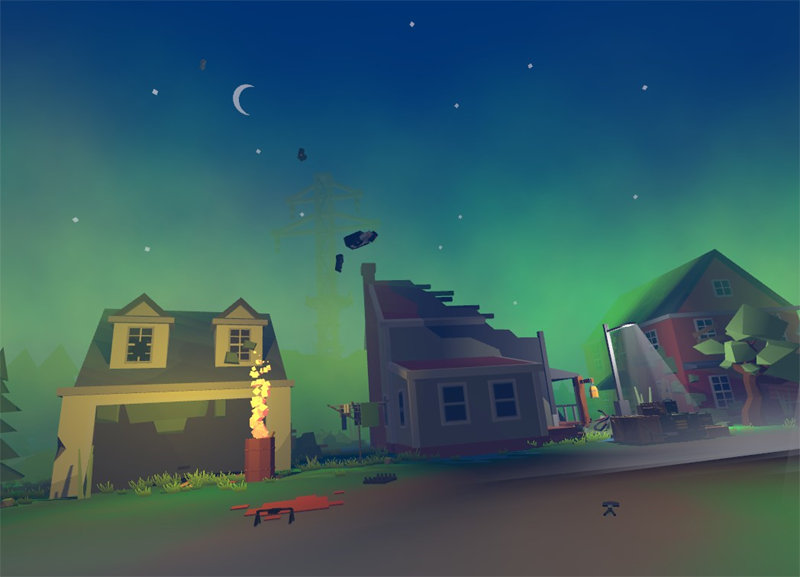 I never shot this zombie. He leapt 20 feet in the air and started getting jiggy with it. This happens all the time.

69 Ways to Kill a Zombie uses cartoonish, minecraft-style graphics, directly cloned from one of dozens of other indie zombie games on Steam. As I’ve stated before, its user interface is broken. You have to launch the game through its folder, many menu buttons don’t work, and the game tells you that you’ve died even when you haven’t. Its control mechanism isn’t effective either. You must hold down the trackpad while sweeping both arms, which sends you flying across the map at an uncontrollable rate.

What would I pay for it?  A cheap, broken, cash-grab, 69 Ways to Kill a Zombie is objectively worthless. It’s as uninspired as zombie-shooters get, and filled with numerous glitches that would, on their own, be considered game-breaking. I’m outright shocked that this game was ambitiously priced at $20. An unfinished mess, I wouldn’t consider 69 Ways to Kill a Zombie worth my disc space even if it were free.