This is the style of game that is perfect for VR. You get to not only see but experience a story as it unfolds around you. An intriguing tale of a Viking family and a tribes’ hardships. It’s a good story, but plays less like a game and more like an interactive movie with a fair bit of slow walking and pacing issues. It’s about the length of your typical film and that’s mainly due to the maddeningly slow pace you’re forced to move during most of the experience.

The environments, though a little cartoonish, are still a joy to behold.

The movement in this game will likely make you a bit nauseous, I’d suggest putting the turn speed to max or trying the snap setting. It has comfort screens available as well but they just seemed to ruin the immersion. I’ve spent quite a few hours playing VR and this is the first time I’ve ever felt motion sickness to this extent while playing any type of VR game. I believe making this into a room scale experience and allowing the players to walk around on their own would eliminate the motion sickness issues.

I had to use my Rifts Xbox controller for this game which was disappointing as there are a lot of times you want to reach out and interact with your environment but are limited to left hand (left trigger) and right hand (right trigger) which stretches out your arm to interact with something or someone, and only if he/she/it is part of the story’s plot.  Your full immersion into this story is crushed by the lack of Touch and Vive controller support, though in defence of this title, it was released before touch controllers were available.

The voice acting was done well and fits the characters they portrayed quite nicely and only on a few occasions did I feel a lack of emotion from a character, but I was usually too busy checking out my surroundings to notice. The sound effects were great whether it was rocks dropping or a door opening you felt like it was happening, kudos to the sound design here, it’s spot on. The environment is heavily cartoonish with a storybook feel to everything which fit the narrative nicely. The other characters movements can be a bit stiff at times and if you stand in their path they just stare at you till you move, which was a little annoying.  While it has a couple puzzle type rooms, the answers are immediately obvious with no real challenge.  As a story clearly meant for adults it’s unfortunate that the puzzles are so tame and lack any required thought to bypass.  There are parts where turning your wagon or stepping in the wrong place at the wrong time might set you back a bit but you’ve but for the most part, you have to put effort into actually dying in this game. 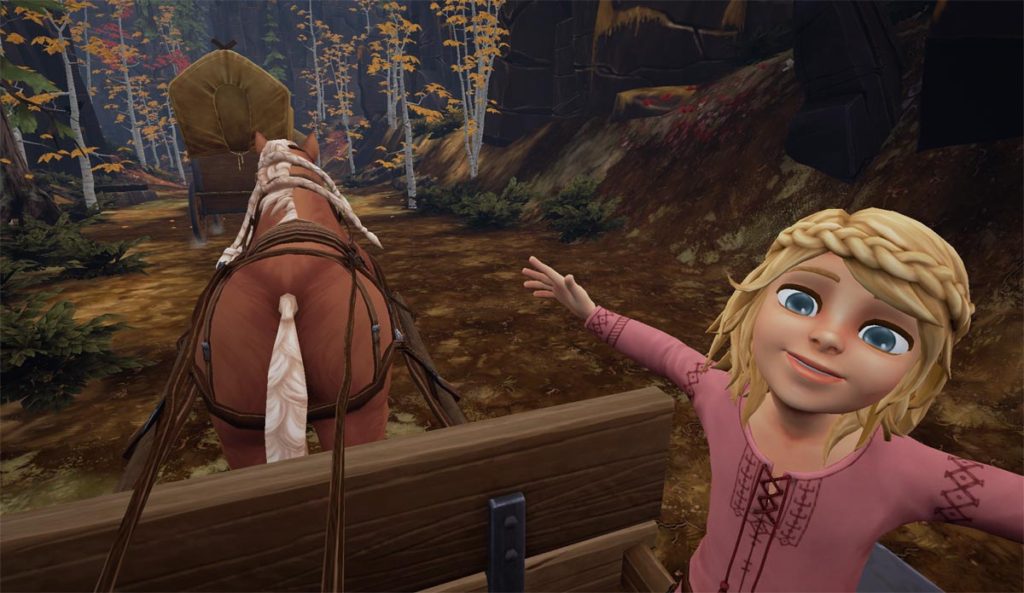 I challenge you not to care about this little girl!

Nausea aside, I enjoyed this experience and I give added points to anything to do with Vikings, Norse tales and legends. From what I understand this is the first part of an ongoing series and the tale told did engross me and the end had me wanting more. I hope the developers decide to add Touch and Vive controller support and make it a room scale experience to help add to the immersion. While I felt attached to the characters by the end of the story, the control scheme, lazy puzzles and pacing issues were a stab against this.  Still, if you are looking for an interactive movie-type adventure in VR, you’ll probably enjoy this.

What would I pay? The current price on steam is $9.99 I think that’s a fair price for an experience like this.

Frima Originals provided thVRgrid with a review copy of ‘FATED: The Silent Oath’ and regardless of our score we thank them for that!